The series (by Kate Leth (writage)  and Brittney Williams (drawage)  ) was cute, funny, fresh, several shades of queer, and heartfelt.

*And* it held for 17 issues. Which these days isn’t bad if you ask me, which you didn’t.

Ian is an Inhuman (of the so-called “NuHuman” branch).

He has telekinetic powers, manifesting as purplish “bubbles” of energy around objects that he’s manipulating. A musicals fan, he has referred to this as his “Matilda power”.

Mr. Soo can lift his own body weight, which means he can fly himself. He might be able to affect up to a tonne.

Curiously, Hellcat (Patsy Walker) sensed Ian’s TK as magical energy. But this seemed to be the case for all NuHumans.

Everyone deserves a chance to fly, or so they say.

Ian Soo is a young Brooklynite of unclear qualifications. He and his girlfriend Zoe Valencia had found a nice apartment, which was just affordable with their combined income.

However, that relationship didn’t work. Zoe was a slob and a criminal, running with a crew of girl thieves and vandals.

She also was emotionally abusive, and freaked out whenever Ian (who is bi) acted a bit gay-ish. Or just not virile enough to fit Zoe’s preconceptions.

As the lad approached a depression, much of Earth was subjected to dilute Terrigen mist.

It activated latent Inhuman DNA in a significant number of Humans. The vast majority of these didn’t know that they had distant Inhuman ancestry.

Like many “NuHumans”, Ian blacked out for several days as his body mutated. 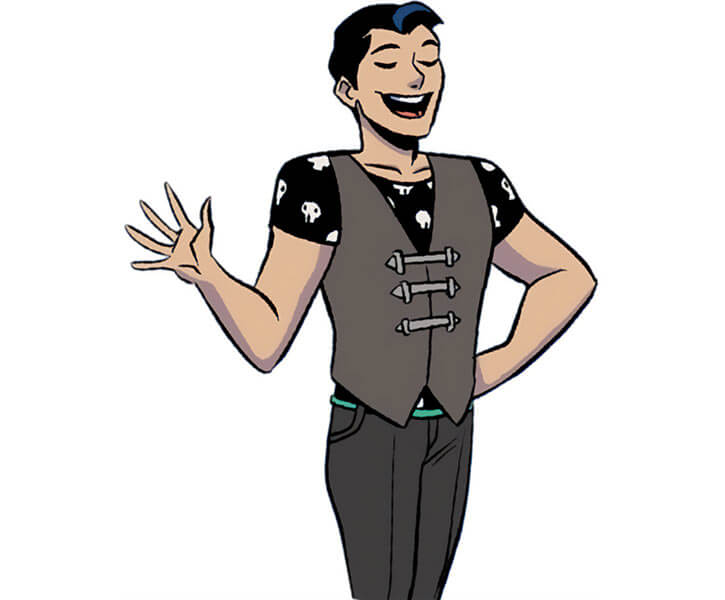 The rent is too damn high

Once Mr. Soo could make it back home, he found his stuff in boxes. Ms. Valencia accused him of cheating on her. She was so furious that Ian didn’t realise that they were both getting evicted, as the landlord was running a scam on his tenants.

Thus, once he re-returned to the apartment, Ian thought that Zoe had left on her own for some reason.

However, that meant he needed a roommate PDQ.

Hooked on a feline

At this point Ian was feeling awful. He had presumably lost his job, and had difficulties coping with being an Inhuman. Though at least he wasn’t visibly mutated.

Hitting rock bottom, Mr. Soo robbed an armoured car (apparently, he “grabbed” a packet of cash on the fly). But this attracted the attention of superheroine Hellcat (Patsy Walker).

In the heat of the fight, and in an attempt to sound impressive, Ian started yelling lines from the musical Wicked.

This didn’t work as intended, as Patsy just squeed about how she loved Wicked.

They ended up chatting about musicals, then Hellcat dragged Ian along for a few good deeds. They helped a distraught woman recover two costly theatre tickets, then scare away her creepy (now ex-) boyfriend.

Patsy then arranged to return the stolen cash. 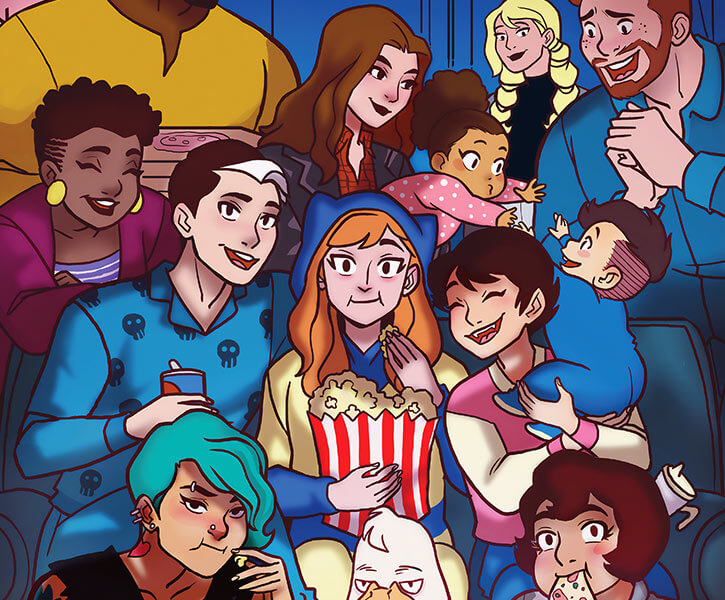 Quickly becoming a bestie of the irrepressibly friendly and supportive Patsy, Ian took her in as his new roommate. Since she too was having an itsy bitsy housing problem at that point.

Oddly enough, this decision soon brought financial relief. As it turned out, their flat was near Burly Books. And this arrestingly gay bookstore turned out to be owned by Tom Hale, a good childhood friend of Patsy.

Ian and Tom went along quite well. Tom thus hired Ian – since his telekinetic talent was great to stock the shelves of the newly-opened bookstore.

Ian also talked about the online discussion groups for young superhumans in New York, who didn’t want to be superheroes or supervillains. These often had difficulties finding a place in society.

This inspired Hellcat to launch her newest project, a temp agency for minor superhumans.

Associating with Patsy led Ian to :

Ian’s blue hair at the front may be a minor side mutation. Or it may be cosmetics he started using not long after his mutation.

He likes using a stylised skull motif – as hearings, as a print motif for a shirt, as a pin, etc.. He “inherited” this from clothes and accessories Zoe left behind. The rest of his wardrobe has no morbid or Gothic motif, though – it’s typical 2016 Brooklyn stuff.

Depending on the day, Ian ranges from about .1 to about .3 on the Unified Fabulousness Scale. His ringtones are, of course, from musicals (such as Legally Blonde).

When angered, he tends to levitate nearby objects without quite realising it.

The outfit with the ornate vest is kind of, sort of his costume. He’ll wear this in those rare instances when he decides to enter a superhuman fight.

It does look cool and tough (if not particularly themed). But that’s because it’s actually Zoe’s vest, not Ian’s. She told him he could keep it, though. 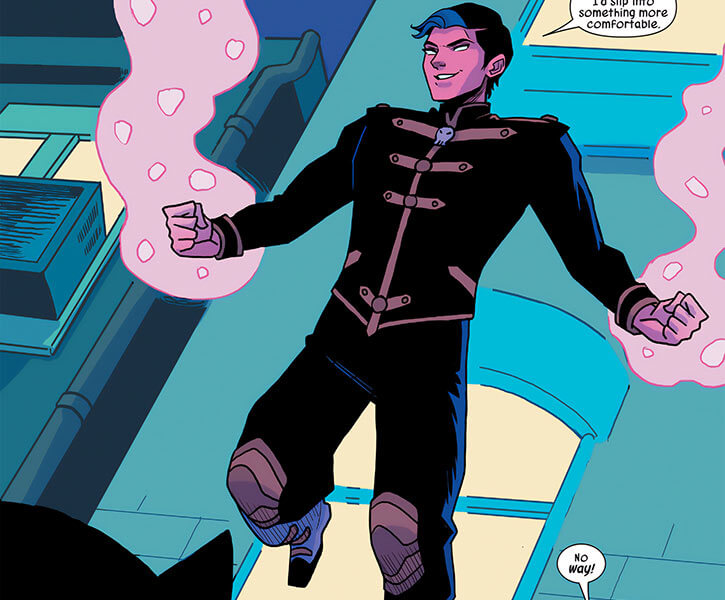 Before meeting Patsy, Ian wasn’t in a good place. But gaining powers, leaving Zoe, meeting supportive friends, and not having to suppress his sexuality did wonders for him.

He’s now much more lively, and dynamic. He has a theatrical sense of humour and good repartee.

Mr. Soo doesn’t see himself as a super-hero – he just wants to live his life. But he has gained enough confidence to use his powers to help or defend people. He will even assist in super-fights to stand by his friends.

However, it does result in stress, delayed anxiety and spurts of aggression. Which he’d much rather avoid.

Ian seems to need more time and maturation to develop proper emotional endurance, and may have depressive tendencies. But when he’s with his friends, he’s pleasant and helpful.

Ian spends as much time on his smartphone as most folks his age.

(In the middle of the night) “Patsy, where are you going ? It’s, like, stupid-o’clock right now.”

Hellcat: “I swear, if I’m in Hell again, I’m going to be so ticked.”
Ian: “We must be, ’cause I’ve got no [smartphone] reception in here. I bet Hell has terrible wifi.”

(To Jubilee) “Are those… chocolate croissants ? You’re my favourite vampire, y’know that ?”

Ian: “You’ve got mail, pussycat.”
Patsy: “Y’know, you’re probably the only person alive who could call me that and live to tweet about it.”
Ian: “You made a topical joke involving modern technology ! I might just faint !”

“I think we scared them straight. So to speak.” 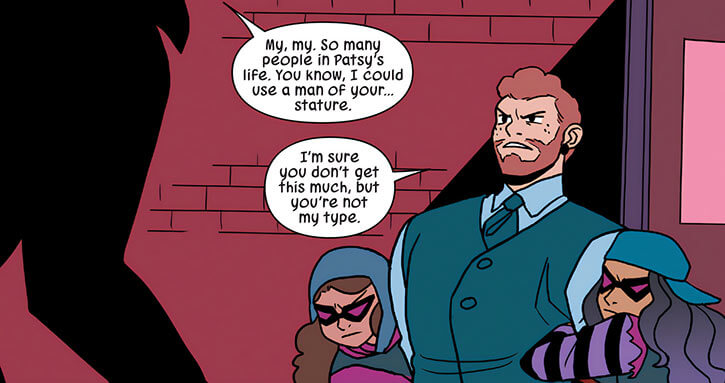 Familiarity (Musicals, and presumably whatever he studied), Misc.: Ian’s skin doesn’t react to bedbug bites. That happens with some people.

Previously had Guilt (depression). Now has Dependent (Tom – 0 pts since they’re both as competent).

Ian tends to use the basic TK trick – levitate an opponent and keep them helplessly in the air.

However, he has little experience and no training with this. So it is possible to “swim” when held aloft by Ian’s telekinetic bubble. This is likely done by pushing against the force field.

This is why his Snare APs aren’t the greatest. However, it is possible that an opponent will assume they are trapped, and not try to “swim”. If so, the Snare attempt has AV/EV 06.

Tom Hale is just a shop owner in Brooklyn – but he’s also a big tall bear of a bloke. Most of his Attributes are 003, and he too has 010 HPs.

He also has Wealth: 005. He gets a cut from the ample royalties of the Patsy Walker nostalgia comics, and Burly Books does enough business to withstand the horrific Brooklyn retail space rents.

He has Familiarity (Small retail management).

Tom appeared in the vintage Patsy Walker comics as minor character “Tubs” Hale. He left Centreville when he could, if only so he could exit the closet. And so people would stop calling him “Tubs”.

Oh, and he has Artist (Singer): 04. He’s a local karaoke celebrity. 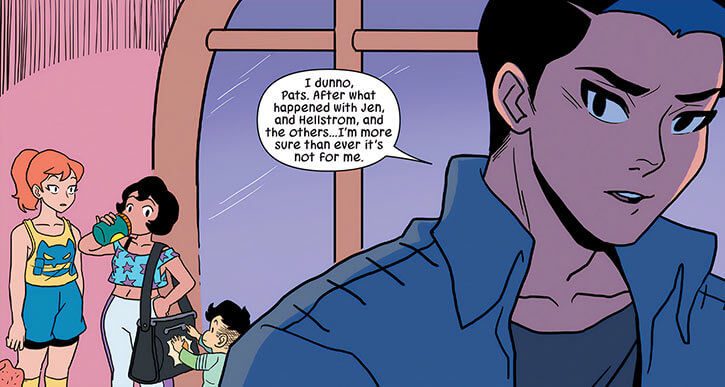 Benefit 1 (Ian is a good friend of the highly-connected Patsy Walker).

We don’t use the stock NPC stats in the back of the DCA book, which are strikingly high. This leaves us with a better numbers space to stat persons such as Ian, who have no special physical capabilities or assets.

As mentioned in the DCH notes (always read the DCH notes !), there might be a sitution where people *assume* that they can’t get out of his floating telekinetic bubble (the Snare effect), even though it actually has low Ranks and you can “swim against” this effect.

Tom is a large man with above-average physical stats (something like STR 01 STA 01 FGT 01, Fortitude 03, Parry 02, Unarmed +3). Plus 3 Ranks of Expertise in small retail business management, one Rank of Benefit (his royalties from Patsy Walker comics), and 3 or 4 Ranks of Expertise as a karaoké singer.