The aptly-named Telepath appeared in 1990. He was a member of the distinctive “super heroes work as space cops” book L.E.G.I.O.N., and essentially only appeared there and in its successor book R.E.B.E.L.S..

Telepath is a, well, telepath. He can do mental communications, mind probes, mental beacons, detection of individuals over a distance, relay perceptions across a group… that kind of stuff.

While his front arms are wimpy, his other pair of arms is quite powerful. But that rarely matters, as Telepath eschews combat of any sort.

Telepath first appeared as a captive to the space pirate Dagon-Ra. Lobo met him while on a mission to infiltrate the band and kill the pirate. Telepath was waiting for the opportunity and assisted Lobo in making the kill, which is also when Captain Comet joined the team.

Later, it was revealed how Telepath came to Dagon-Ra’s service. The superhumanly powerful pirate had attacked Telepath’s homeworld and seemingly killed everyone there, only sparing Telepath to become his personal slave.

Dox found Telepath as useful as Dagon-Ra did, and he was quickly integrated into the core L.E.G.I.O.N. officers. Of course, there was the small technicality : Lobo had actually threatened Telepath that he would very, very painfully dissect him if he didn’t join.

While it was basically OK with Telepath to perform law enforcement duties, and he genuinely cared about most of his teammates, the omnipresence of physical danger (the worst of which being Lobo) didn’t sit well with him.

Telepath is timid and meek, which is a bit of a problem given his job and companions. Not being a warrior (although he’s certainly not a coward), he tends to lack initiative in tense situations. He will almost never take an active part in fights, instead providing support or even just cheering.

In fact, it seems that Telepath has difficulties accepting negative concepts and feelings such as violence, hatred, stupidity and so on.

He generally comes across as a very nice, smart, timid, sheltered kid.

“Er… good evening everyone. Don’t disturb yourselves. We’re only in for a er… quiet drink.” (after he and Lobo enter a bar)

“By the hive of my ancestors !” 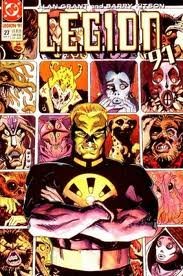 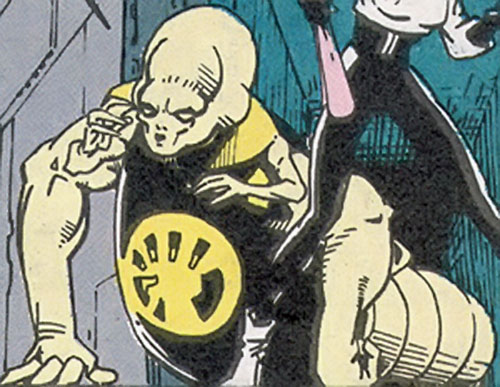 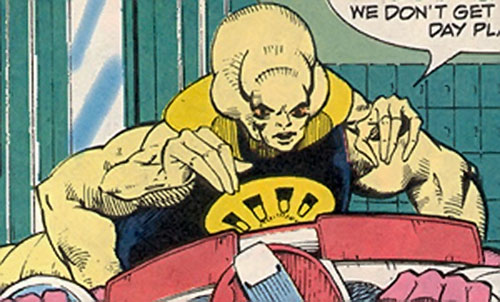