The Televillain’s amazing static suit enables him to become television and radio static transmissions at will. When using his powers, he usually dives into a screen or antennae.

His abilities work through active televisions and laptops as well. No known security system or scrambled network is known that is able to stop him.

T.V. repairman Reuben Tube liked to tinker with electronics as a hobby. He invented the astonishing device that would actually allow him to enter the virtual world of on-screen stories, travelling from one T.V. set to another as the colorful bandit called the Televillain. He’s said to have doped Mr. Ed  in an early TV show.

Tube and a couple of other inmates escaped from there after 30 years. He had found a laptop computer left behind in that realm by a visiting Billy Friday. Again free, he shot Monica of the Friends television series to prove his powers when extorting TV stations for money.

He was captured and placed back in the Hell of Mirrors when Supreme short-circuited his suit. Fans of Friends then beat him unconscious.

The most curious part of his suit is his headset. It exactly resembles a black television with a green display where his face is. Below the screen are found two pink buttons and on top of his head if found the classic TV antennae pair in green.

The Televillain is a typical crook. He uses his powers for robbery and extortion.

He usually begins by a display of his powers, by doing something outrageous, like apparently murdering a TV star in the virtual world of television. After this he will give his terms for not continuing doing so right in that television show.

He relies on ordinary handguns for attacking and threatening with.

Although he rarely engages in it himself, he enjoys the thought of mayhem and carnage. He is what one would call a one-dimensional villain.

Naturally, he watches television a lot.

The Televillain, strangely enough, apparently did not find imprisonment disturbing. Perhaps he is blocking away this trauma by obsessive behavior.

Neither was he disturbed by the fact that he had been gone for nearly three decades from the world. His motifs and modus operandi remains the same as before. However, the Televillain immediately adjusted to current technology levels.

His bizarre crimes would be classified as alien if he did not give an appearance of being a regular person in a costume. He appears to believe in working for some unspecified ’Dark Gods’, whom he asks for favors. These might be a product of lack of sanity from his extensive time as a prisoner.

It is safe to assume that the Televillain has no social life whatsoever. He is maniacally obsessed with his special branch of crime. His best friends, if one should call them that, are the fellow prisoners of the dimension called the Hell of Mirrors, who all are notorious murderers and lunatics.

Although he performs his crime sprees alone, he has shown an excellent ability to cooperate with other criminals.

He does seem to believe that his powers makes it possible for him to access anywhere and get away from anyone. Basically, this is also true since no known security systems so far have been able to keep him out. Thus, he often faces superior opponents with little fear of retaliation. When powerless, however, he has been shown to be a coward.

“How I have prayed to the dark gods for this moment !”

“Darius Dax will probably destroy the world without you ! Hell, he’s probably already doing it ! I wish I had a television.”

“Pay up by tomorrow, or I’ll whack Commander Picard and the fruity robot guy !” (having just killed Monica of Friends)

The Televillain is probably a homage to some villain of the Silver Age  Superman’s. The Terra-Man perhaps or someone really obscure.

Thus, use either the Silver Age DC Universe in its entirety or Moore’s Supreme Universe, possibly as a parallel world, with its small differences and twists of these classic characters.

Drawbacks:
MIA (Television-related crimes), Attack and Loss Vulnerability (All of the Televillain’s powers are derived from his costume. Any RAPs of damage from electrical attacks, aimed at him as a Trick Shot, gives him a cumulative R# rating which affects all of his powers effectively short-circuiting him).

Equipment:
In modern times, the Televillain is likely to be carrying around/using an ordinary laptop computer with his powers. 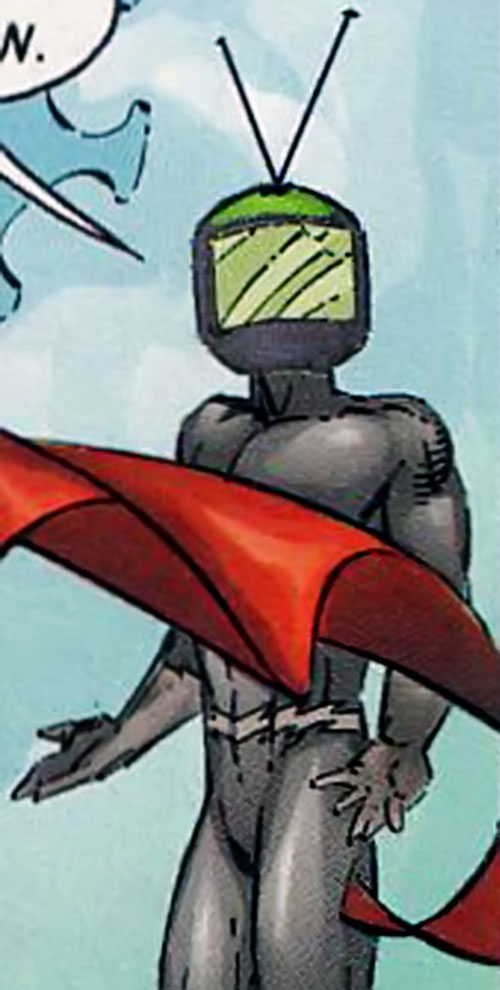