Like all Hykraians, Ganglios has telepathic and telekinetic powers. Such powers enabled his people to communicate and use tools in the depths of the Hykraian ocean.

Due to natural talent, Legion Academy training, and the exigencies of life as a Legionnaire, his talents are somewhat stronger than the majority of his people. His telepathy especially is stronger than the norm due to training with Saturn Girl.

Telepathically, Tellus can communicate across a relatively short range. He can scan surface thoughts, probe for deep memories, and to some extent influence weak minds. As a xenologically trained telepath (one skilled at bypassing physiological differences in brain structures), Tellus can use his powers on non-sentient animals almost as well as he can on human beings.

An aquatic creature, Tellus is much more comfortable in water than in air. Thus, he can swim with great speed and agility. He was initially clumsy flying with his Legion flight ring, but quickly adjusted. His familiarity with navigating the currents of Great Mother Ocean makes him unexpectedly skilled at managing air currents, as well.

He wears a life-support helmet that enables him to breathe in any environment, with no known time-limit. The helmet also translates his speech into spoken Interlac, though he finds telepathic communication more natural.

Tellus comes from Hykraius, a vast world with a liquid atmosphere of water and methane.

Hykraius has only recently taken an active role in 30th century interplanetary relations. The native race of Hykraius was discovered by the technologically advanced Gil’dishpan empire, a race of aquatic, telepathic methane breathers. Hykraius vacillates between the Gil’dishpan sphere of influence and the United Planets. 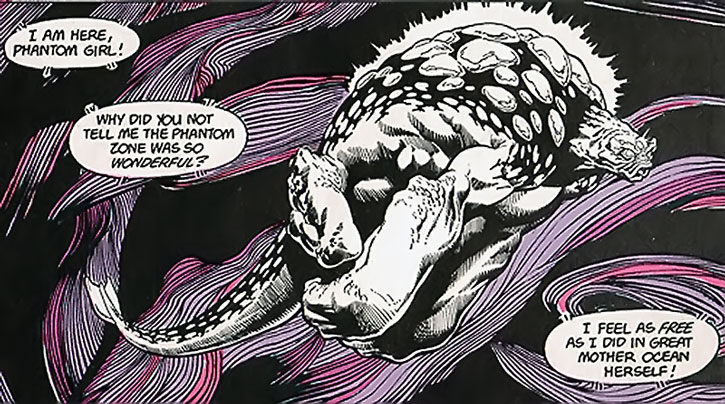 Tellus’s people are the only sentient race on Hykraius. The environment is poisonous and deadly to humans. Yet the Hykraians are perfectly adapted to their environment, which they refer to as “Great Mother Ocean.”

Typically they have lived in the depths, communicating telepathically and building telekinetically. Thus, they had never imagined life among the stars — they had hardly seen the stars — before the Gil’dishpan came.

Tellus, whose real name is “Ganglios”, is one of the few Hykraians to feel the pull of the stars even more strongly than the affinity for Great Mother Ocean. He chose to leave his home and explore the strange and wonderful new worlds and experiences. He worked as a crewman on an interstellar freighter to raise funds for schooling in the United Planets.

During his travels he learned of the Legion of Super-Heroes and was inspired by the concept. So he traveled to Earth and applied to the Legion Academy. He hoped to learn enough there to start a similar organization on Hykraius.

At the time of his arrival, he assumed his alien nature would preclude actual Legion membership. He also anticipated that his inability to cope with Earth’s atmosphere would require that his stay be brief and only within specially prepared accommodations.

His special quarters were prepared for him. Furthermore, Wildfire talked Brianiac 5 into crafting a special life-support helmet that would allow Ganglios to leave his quarters and move about freely.

This unexpectedly led to an even greater opportunity. When Saturn Girl and the other Legion Founders unexpectedly resigned from duty, it opened up a slot for another telepath to apply for the Legion.

In one of the biggest open calls in the team’s history, Ganglios applied for that slot. He was accepted, much to the dismay of Mentalla of Titan, who applied at the same time. Tellus was accepted alongside Magnetic Kid, Polar Boy, Quislet, and Sensor Girl, and had a special bond to his fellow newcomers. 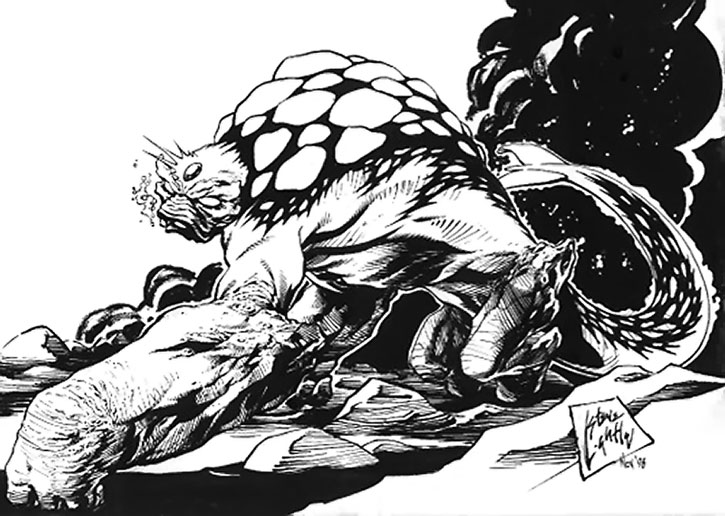 Ganglios’s codename is “Tellus”, a word meaning “People” on Hykraius. It also supposedly references his TELepathic and TELekinetic abilities for Interlac speakers. Ganglios finds it odd to be addressed this way. Particularly since it means “Earth” in an ancient human language  but is now used for an aquatic non-Earthling.

But then, Tellus finds humans to be strange in many ways. Almost as strange as it feels for him to operate in Earth’s open air without the soothing currents of Mother Ocean.

He is most comfortable in his quarters, but is fairly social. Thus, he is often found in Legion common areas or swimming in the pool, despite its lack of methane. He and Magnetic Kid often train together, working to increase their abilities, with the encouragement of Polar Boy. He was very proud to lead a Legion team back to Hykraius to investigate a mystery there.

Secrets of the mind

When Saturn Girl came back to the team, she worked with Tellus on his telepathy. Thus, he found it much less lonely on Earth with another telepath to commune with. He took an active interest in his first Legion Leader election. Tellus was excited when fellow newbie Polar Boy won, even though his own vote went to Sensor Girl.

Tellus’ enjoyment of Legion life was curtailed when he glimpsed a secret in Saturn Girl’s mind. She was part of a conspiracy within the Legion. He sensed few details and his accidental mind-link faded quickly, leaving Tellus unsure what was going on. He confided in Polar Boy and Magnetic Kid, and sought advice from Duo Damsel — who was also part of the Conspiracy.

Sensor Girl discovered the conspiracy through her own powers. She explained it to Magnetic Kid and Tellus. Saturn Girl, Duo Damsel, Brainiac 5, and Mon-El had sworn a blood oath to kill the Time Trapper in vengeance for the death of Superboy. They also had sworn to keep the rest of the Legion out of the battle for their own protection.

The Conspiracy exposed deep fractures between Legion members, including the contempt many veterans had for Polar Boy’s leadership, and the team went through a dark time.

Tellus remained dedicated to the Legion. However, his initial enthusiasm was often replaced with confusion and dislike for human contentiousness and duplicity. A relatively short time later, Quislet — Tellus’ fellow non-humanoid — was lost in action against the Emerald Empress. Shortly thereafter, Magnetic Kid was killed in action during the Magnetic Wars.

In the alternate timeline  created by the sorceress Glorith (the “Glorithverse” or “Five Year Gap” Legion), Tellus resigned a year or two later. This came after the devastating events of Black Dawn, which among other things saw the apparent death of Wildfire.

He returned to Hykraius, which after the Great Collapse of the UP Economy, seems to be drifting back into the Gil’dishpan sphere of influence. His world also grew interested in the Dark Circle’s religious beliefs, a variation of which is native to Hykraius.

Ganglios remains at least somewhat friendly with his former teammates, and attended an LSH reunion on Winath, at the home of the ex-Saturn Girl and ex-Lighting Lad.

Tellus is something of a cross between a human-sized fish or lizard, although he’s closer to an amphibian like a salamander. He has a yellow body with purple scales or growth on his back and purple ridges above his eyes (resembling eyelashes) and around his mouth.

There’s also a large purple growth or scale in the middle of his forehead. It is so smooth and shiny it appears almost like a gemstone. His mental energies often seem to emanate from it.

Tellus has long, large front legs with very broad and clumsy “fingers,” two small, almost vestigial back legs, and a long tail with a purple fin. See illustrations for details.

On Earth he wears a life support helmet. This and his Legion Flight Ring are the only accessories he wears. He’s fairly clumsy on land, less so in air, and quite graceful in the water.

Tellus at first was very affable, friendly, and extremely polite. He was a bit young and uncertain, but eager to do his part and enthusiastic about the Legion. He showed himself to be brave and dedicated, and was an excellent team-player. He didn’t make grandstand plays, and was happy to act in a support role. Yet he was not afraid to put himself on the line, either.

In fact, coming from a tight-knit community of telepaths, he found the teamwork of the Legion to be comforting and very important to him. Tellus was shaken when he discovered fractures and factions in the team.

In those conflicts, he naturally aligned himself with Polar Boy and especially Magnetic Kid, as well as fellow “new” member Sensor Girl. He was initially very trusting of his Legion Academy teachers, Bouncing Boy and Duo Damsel. It was never shown how Duo Damsel’s betrayal of his trust during the Conspiracy affected their relationship.

It does not appear to have affected his loyalty to the Legion. But since the Conspiracy he seems less naïve and less self-effacing, acting more forcefully and proudly than before.

“I regret my telepathic probe was painful, Dev-Em. I merely wished to see if yours was the hostile thought pattern I detected.”

“It is so vast. I had not thought humans could appreciate such openness as beauty.”

“Legionnaires do not stand alone !”

Polar Boy: “So that’s why the two of you have been living in the gym lately ! Well, maybe I can help.”
Tellus: “We would appreciate your efforts, Polar Boy. Both of us wish to be the most powerful Legionnaires we can be.”

Magnetic Kid: “What happened to you, Tellus ?”
Tellus: “I… I am sorry, my friend. I lost my concentration. I have had difficult matters on my mind recently.”
Magnetic Kid: “You can’t let your personal life interfere with the Legion, Tellus. Are you getting homesick for Hykraius ?”
Tellus: “It is Legion business that concerns me, Magnetic Kid — there is a conspiracy at work within the Legion — and worst of all, I believe Saturn Girl is one of the four conspirators.”

“What in Great Mother Ocean am I to do now ?”

Tellus: “I have a problem of some urgency. May I telepath in confidence ?”
Duo Damsel: “Naturally.”
Tellus: “Polar Boy asked me to investigate some suspicions he had, and I found there’s a conspiracy within the Legion. I don’t know what it is, or who all the members are, but it scares me.”

Duo Damsel: “I’m glad you trusted me with this, Tellus.”
Tellus: “You were my teacher, Duo Damsel — and you are a retired Legionnaire, so it is not as though I betray our secrets to an outsider.”

Saturn Girl: “What we do is our own business.“
Tellus: “Saturn Girl, of all of us you surely realize what an un-Legionnaire-like answer that is. I admit to being a new Legionnaire, but I do not think my judgment is faulty.”

Drawbacks:
Creepy Appearance (to humans); Fatal Vulnerability (lack of an H20/ methane atmosphere — treat as drowning); Power Loss (loses 2 APs of DEX when he is on dry land, as opposed to being in flight); Public Identity.

His Acrobatics (wind and water currents) is weird but his familiarity with ocean currents translated to him being able to fly easily into and out of a tornado. 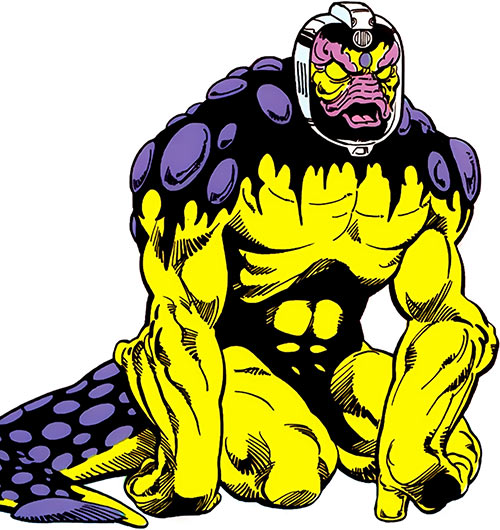 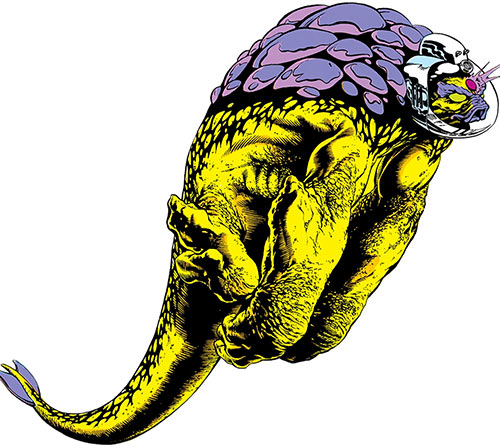 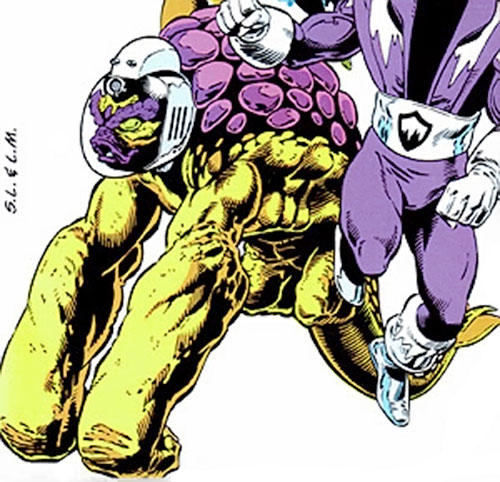 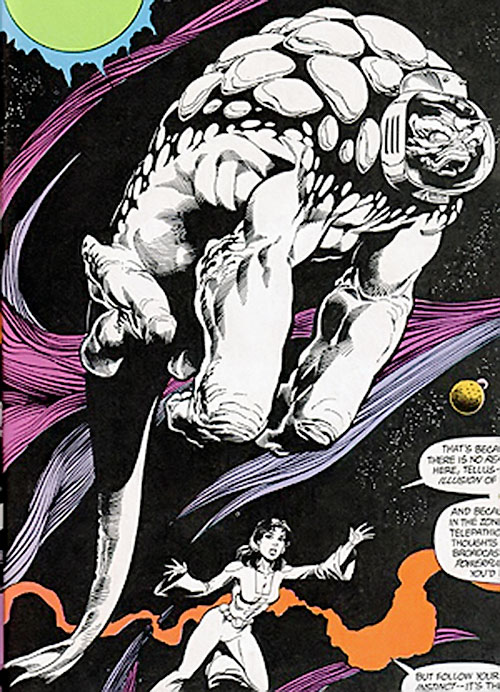 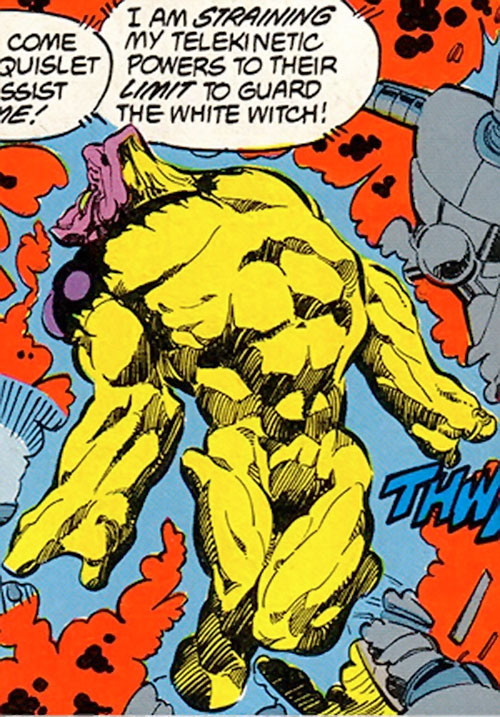