Temper hits opponent with anger and then run, hoping to sow chaos and infighting. He tries his best not to remain in the thick of combat. Sometimes, he Team Attacks with Mocker.

Emotionally unstable, Thomas Perry was treated with an experimental drug to allow him to retain control. It worked, but also activated latent mutant power. After some chaos, the drug (which worked fine) was tried again in more controlled conditions, but with the same results.

Perry realized the drug gave him power and fled with the remaining doses. A few days later he sneaked back and made the head physician kill himself, so nobody would gain the same powers as Temper.

The Temper costume is dark blue with red trim.

Bonuses and Limitations:
Broadcast Empath has Ammo: 06, and can only triggers anger.

Drawbacks:
Serious PI (kept in check by his special gas), Loss Vulnerability (when deprived from his gas for more than 24 hours). 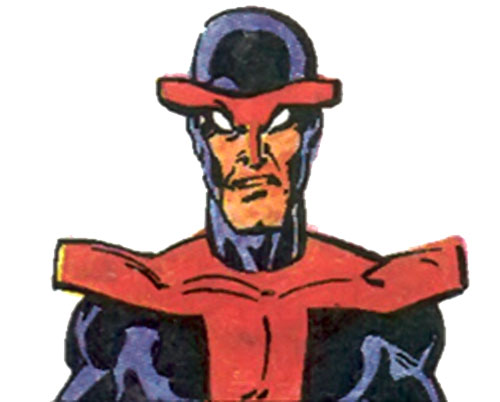