Tempest has the uncanny ability to generate a dimensional  aperture. That allows him to travel instantaneously to any location he desires throughout the multiverse . He has developed his ability through training and is capable of a number of stunts.

In addition to his powers, he is in excellent physical health and is an adequate hand-to-hand fighter.

The first incarnation of the team known as Atari Force consisted of five Humans from different nations. They crewed the the multi-dimensional spaceship Scanner One to search for a new planet for humanity. This mission came after Earth faced ecological devastation after the last major world war.

This team consisted of:

A semi-sentient alien creature named Hukka because of the noise it made later joined as team mascot.

After several years of adventuring in various parallel universes, the Atari Force eventually found a suitable world. After defeating a powerful and enigmatic enemy known only as the Dark Destroyer, it could be colonized. It was named New Earth.

Martin’s wife, Lydia Perez, had died shortly after New Earth was colonized. That was while giving birth to their son, Christopher Champion.

20 years later, a second Atari Force team was formed. This team was also led by Martin Champion. Champion was now convinced that the original team’s nemesis, the Dark Destroyer, had survived and plotted to destroy mankind.

Martin blamed Christopher for his wife’s death. Therefore, the boy was raised by two other members of the original Atari Force, Li San O’Rourke, and Mohandas Singh, along their daughter Erin Bia.

Due to the exposure to multidimensional energies on their adventures, both Perez and O’Rourke, gave birth to mutant children. Christopher had the ability to travel instantly between any two locations in the multiverse. And Erin Bia had some precognitive and telepathic abilities.

Trying to find his place in the world, Christopher enrolled to be trained in his unique abilities at the ATARI (Advanced Technology And Research Institute). This is where he befriended Prof. Caithlin Venture, who became like a surrogate mother to him.

Despite the lack of ties with his father, he later joined in with a second Atari Force team. His aim was to prove his worth.

The rest of humanity had not shared Martin Champion’s beliefs that the Dark Destroyer still lived. Martin, however, had heroic status as the founder of New Earth. As such, he was given enormous resources. For decades he used those for scientific work, probing the multiverse to locate his old enemy.

Unfortunately, one such probe was captured by the Dark Destroyer. That provided him with a map back to the New Earth dimension. Martin Champion decided that the probe had to be retrieved at all costs. And from there, he would end the threat of the Destroyer once and for all.

Since the Dark Destroyer was only a myth on New Earth, he hastily collected a new Atari Force team:

The team hijacked the old multidimensional ship, Scanner One, making them fugitives from the law of New Earth. They left to fight the Dark Destroyer. The team was later joined by:

When the problems were finally over, it was clear that the fugitive team could no longer stay on New Earth, and so they left to complete a dream back on old Earth.

Tempest seems to be in excellent physical shape. He wears the costume of an action hero; a full body suit in red and white with a black headband, ATARI insignia and yellow armbands, belt and boots.

The look is completed by blue eyes, long blond hair and handsome features.

Tempest has a playful, active personality and mindset. Yet he also has a tendency to become brooding and sulking if anything goes wrong. Insistent on helping out wherever he can he sometimes attempts too hard to be seen as somebody.

Most of the original Atari Force blamed him for the death of their fellow teammate Lydia Perez, his mother. This burdened him all his life.

This mindset has kept him active. Which made him quite athletic and a reasonably good fighter, even if he tends to be uncertain in combat situations. He does his best to keep an optimistic attitude, but it fails quite often. If there is no escape in a combat situation he will fight as hard as possible.

Unfortunately, it has to be said that Tempest is pretty predictable. He is impatient in most situations. Still, there is a potential hero in him. Indeed, he is fast growing more confident and focused as part of his adventures with the new Atari Force. When he believes in the cause, he can be exceptionally stubborn.

Due to having lacked a father growing up and feeling like something of an outcast, he was dependent on his foster parents. Yet he seems to finally be becoming more of his own man. In particular, he feels a deep attachment to his adopted big sister, Dart.

Professor Lucia Caitlin Venture, his mentor at the ATARI, has been extremely supportive. She is considered a dear friend, and a surrogate mother.

His pet the Hukka is a funny, little friend. In general, Tempest makes friends rather easily. After leaving New Earth, Tempest and his father seemed to have a more positive father-son relationship.

Tempest probably feels that his powers are both a blessing and a curse. While they allow him easy transportation anywhere, a chance to be somebody and even to escape this dimension and people in general, they are also considered freakish by many people. This image has affected him.

He attempts to use his abilities, that are second nature to him, to an ever increasing extent, while proving to the world that he can be a hero, if nothing less.

“Great navigation — I phased right into the crew quarters ! Always look on the bright side : at least now we know it’s inhabited.”

“No matter what I say, dad’s going to think I turned coward. He’ll never understand I had no choice but to run…”

“Bite the big blue one, Hunter.”

On Earth-Prime, Tempest’s equivalent would definitely be Joey Tempest of the band Europe , as they look suspiciously identical. 🙂

Equipment:
Special Outfit [BODY 01, Bonus: Outfit is completely immune to the effects of Tempest’s phase-field and its detrimental effects].

Tempest has the ability to travel through the multiverse. This means parallel worlds upon parallel worlds, co-existing in the same space, separated by phases of probability. He can choose to enter other realities at will (Dimension Travel), or instantly transport himself distances in ordinary space through warps (Warp).

Other parallel realities generally have a Travel value of 2 unless stated otherwise. He learned many phase coordinates for other dimensions by heart. Thus, he has no trouble at all locating any position in, seemingly, any dimension and jump there in an instance (Detect power and Scholar advantage). If somehow lost, he can use a telepathic link, initiated by Dart, to home in on her location.

To be exact, Tempest physically travels through another, unidentified dimension whenever he warps from one location to another in ordinary reality. The physics of that dimension forces any matter from the ordinary dimension entering it to detonate violently (Bomb).

Thus, by first Grappling an object or opponent, and then activating his phase-field, thus activating a dimensional jump, he can deliver an attack.

After having received RAPs from Grappling an opponent he can, during the next phase, if the Grapple remains, use his DEX as AV and APs of Bomb as EV. He does, sometimes, in combat attack multiple targets in quick succession through several warps.

Theoretically, it is possible to leave an object or opponent stranded in the other dimension, which would result in a a new exploding attack every phase (an opponent with a high enough BODY would survive such an experience). He will normally not use this attack against humanoids as it is considered Killing Combat.

Tempest has learnt a number of unusual power applications. If he concentrates, he can transport up to ten kilos of matter with no ill effect from point to point. Tempest himself, of course, is immune to this effect, as is his special outfit.

Furthermore, having fine-tuned his abilities, he can phase any part of his body to any other point in the many layers of space, giving him a greatly extended reach in combat situations. He can also reach components in security systems and behind walls and sabotage electronic equipment by careful warping of his hands (Thief skill).

Another trick, that demands great concentration and is exhausting, is to stay in a light pre-phase stage while traveling between dimensions. This will make him intangible to any external threats (Dispersal), such as radiation clouds, strange physical laws and so on. He uses this option only if he is exploring new, unknown and potentially hazardous dimensions.

As soon as he has decided to remain in a dimension, shutting off his phase-field, his intangibility will cease to work.

He seems to need be in good shape to safely and easily use his powers, and if hurt, will have difficulty navigating properly between jumps (GM discretion). And if heavily drugged, his powers seem completely non-functional (Loss Vulnerability).

Another way of nullifying his powers is to keep the area he is in complete saturation of low-level sonics. Dart can still contact him using her powers even as his own powers are negated, and Tempest may even initiate contact himself.

Tempest is an emotionally immature young man. He has some issues with emotional abuse originating from his father’s complete rejection. His relationship with his father, Martin Champion, is tense and he would likely do almost anything to win his approval. Meaning a willingness to spend lots of Hero Points on important actions and taking major risks.

The result of his uncertainty is that he is rather self-conscious, uncertain. He’s also inclined to retreat from this universe to the solitude of other parallel realities with a soothing setting to avoid sorrow. Over time, however, he has been building a better relationship to his father as they have been adventuring together.

He refuses to let anybody see his pain whenever he is hurt. He has a tendency to loose his temper, get upset and then get embarrased about it. In general, he has a defensive attitude.

All of these things are represented by his relatively low Mystical stats and his Uncertainty Drawback. At the very start of his adventures with the new Atari Force his Spirit score was likely only a 3 APs and he also had a MIH (Martin Champion), which was soon bought off. 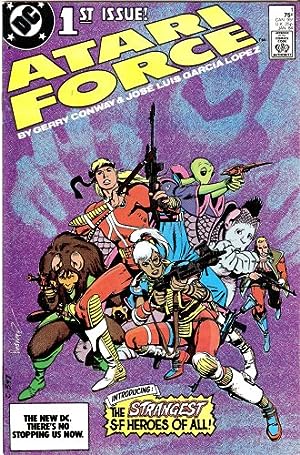 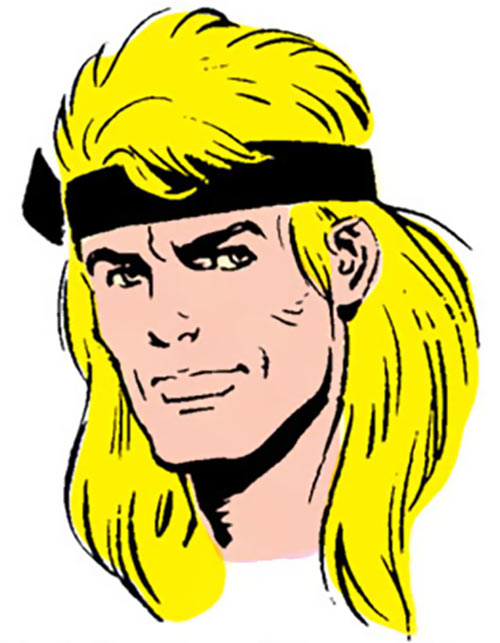 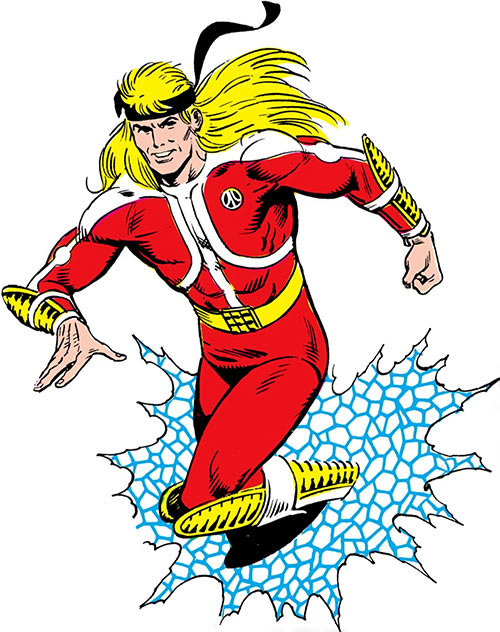 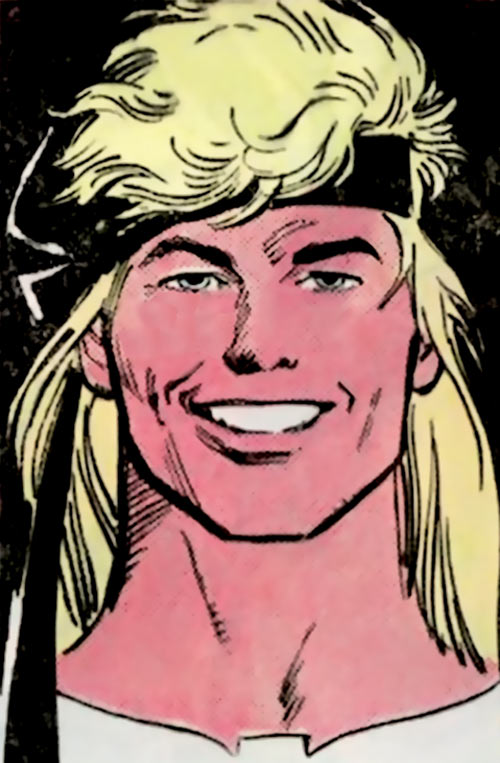