There isn’t much material about these guys. But assigning cookie-cutter stats to these cookie-cutter archetypes seems reasonable, doesn’t it ?

One of Tequila’s core competencies is manipulation and seduction (in DC Heroes RPG terms, Charisma, Detective, Attractive). Though she’s undeniably a beautiful woman, much of her Attractive bonus is based on manipulation and experience rather than looks.

Tequila is very good at talking to heterosexual men and convincing them to go along with her wishes. She can get results within a short time.

Her other core competency is toxins. She apparently specialises in animal and plant-based poisons and venom rather than designer toxins. She’ll use those to kill a sleeping person, or by slipping it into a drink or into food, and other quiet methods of delivery.

For flourish, she’ll sometimes use a live venomous animal such as a scorpion. The one demonstrated example would lead zoologists to suspect that she can procure naturally-occurring mutant beasts who can produce much greater, and much more potent, quantities of venom than their small size suggests. Cinematic  animals, if you will.

Tequila also seems to be a competent field agent, trained with weapons and handy with intelligence gathering, manhunting, taking initiatives, etc.. She seemed to be a superior driver and to have an excellent intuition.

Tequila was one of the seven international hitmen hired by American mobster Rosalie Carbone to eliminate the Punisher. Thinking it would motivate her hires, Carbone offered an astronomical bounty (five mils in early 1990s dollars).

Tequila was nearly successful after she teamed up with the silent Garrotte. She’d distract the Punisher so Garrotte could move in for the kill. Following police reports, they found their prey chasing a serial rapist in the New York City Subway.

Tequila somehow convinced the psychotic, panicked, shotgun-wielding rapist to fake taking her hostage to lure the Punisher in. The plan nearly worked but the Punisher narrowly survived. Tequila vanished but Garrotte and the rapist were killed.

At the end of the hunt, Tequila was one of the last two survivors among the Punisher’s hunters. She moved in to kill the crippled vigilante. But her colleague Cane betrayed her and stabbed her in the back with a sword so he could pocket the entire bounty.

Tequila hasn’t been seen since and is presumed dead.

“We can catch up with that train after it goes underground before 29th Street. Then the bounty of this Punisher man is ours alone. Maybe we could spend it together.”

“I never liked guns anyway. Blades are so much more… intimate.”

Bonuses and Limitations:
Gadgetry and Scientist are both Limited to matters of natural toxins. 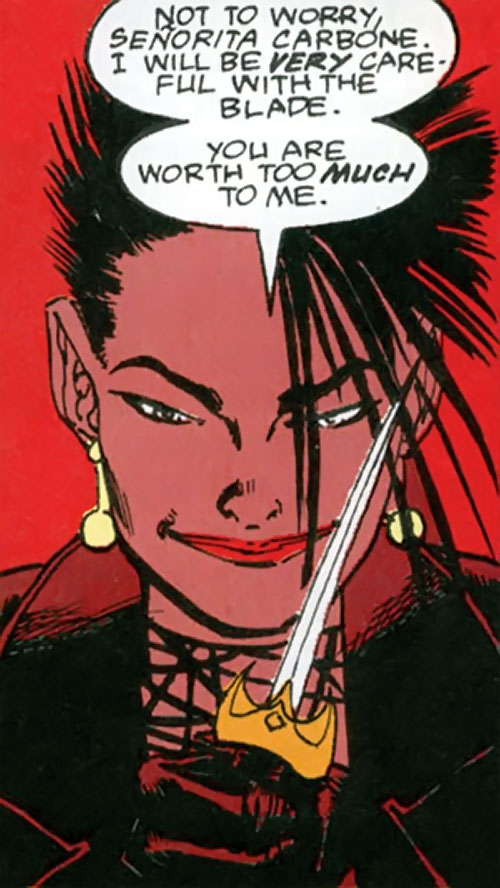