Terminal is one of the very few Jokerz with a functioning brain. That and the fact that he’s fairly charismatic and well spoken. More importantly, he’s original in some of the pranks he wants to play. These assets easily made him the leader of his own posse of Jokerz. He seems fairly capable in combat with a blaster  as well.

In his civilian identity he is a brilliant student (second only to Max) and the students’ council president.

Carter Wilson likely became a Joker to escape the tension at home. His overbearing mother put him under constant pressure to be the best. At some point in time Carter began moonlighting as the Joker, Terminal. He amassed three loyal followers (possibly more). Eventually he saw the opportunity to make both identities work for his benefit.

After Max got a perfect score on the GET and became a shoe in for valedictorian of their class. Carter set about vandalizing the school specifically targeting Max. His first attempt was thwarted due to the computer security at the school.

He came back for a second attempt. However Batman (Terry McGinis) had been tipped of by the previous attempt. He saved Max from the acid spraying cleaning robots that Terminal had sent to kill her.

After that Max wrongly thought that Terry was a Joker. That was becuase the findings of her program and Terry’s recent suspicious behavior due to his secret ID. Max sent Terry an e-mail to talk about the secret ID business thinking that he was a Joker.

However when the time came to meet the Terminal and his Jokerz had been following her and ambushed her. Terry got the mail in the nick of time and rushed to save her. After a brief scuffle Max and Batman defeated the Jokerz and it was revealed that Carter was actually Terminal.

He was sent to juvi and hasn’t been seen or heard from since.

Carter is a somewhat attractive teenager who gives off a definite preppy vibe. He generally wears a letterman jacket and other preppy type clothes.

In his secret ID as Terminal he wears a straight jacket with the sleeves undone over shredded black pants and brown boots. His hair is long and black and his face is painted to look like a skull. His persona as Terminal is actually quite chilling.

Carter had almost everything he wanted. The one thing that he could not deal with was the constant pressure that his mother put him under. Like a lot of disaffected youth he decided to lash out and become a rebel.

Although he couldn’t face his problems (his mother) directly so he created a new identity, that of Terminal, to deal with the stress in his life. Once he figured out how to make his secret identity work for his public life he became even more ruthless and focused – that was until Batman happened.

In a lot of ways he’s the sad product of the kid who had almost everything, but blew it because he was unable to confront his own inner demons and face reality. Like a lot of the so-called popular kids in pop fiction he’s also has a dark secret. ”The brighter the light the darker the shadow.”

Office worker: “Thanks I thought I was going to miss my train.”
Jokerz thug: “Hey, Terminal, they guy says we’re in his train.”
Terminal: “You really should label the things you own. I do.” (proceeds to spray paint the guy’s suit)

“Query: How many custodians does it take to clean a school ? Answer: None, twip. It’s all done by machines. Just a squirt of oil and a recharge and they keep the place spotless and cleanliness is so important, don’t you think ? That’s why I’ve replaced the standard cleaning fluids with something a little stronger – acid !”

“Looky looky it’s miss perfect score. The luckiest girl on the planet – until now.” (fires at Max with a blaster)

The Joker’s could be dropped whole cloth into modern Gotham, obviously as Bat foes. The Joker, like most criminal masterminds, has been known to employ henchmen to assist him with his exploits, why not just use the Joker’s as a set to keep with his whole clown motif?

Aside from that Terminal could easily make a competent right hand man for the Joker, perhaps leading the Jokerz on crimes while their mad leader rots in Arkham or he may even be smart enough to engineer a break out…

Source of Character: Batman Beyond TV. 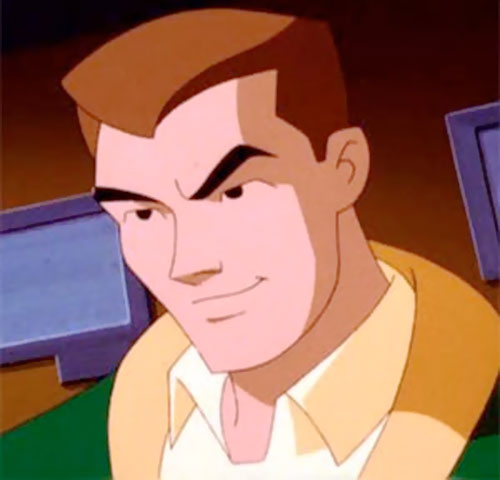 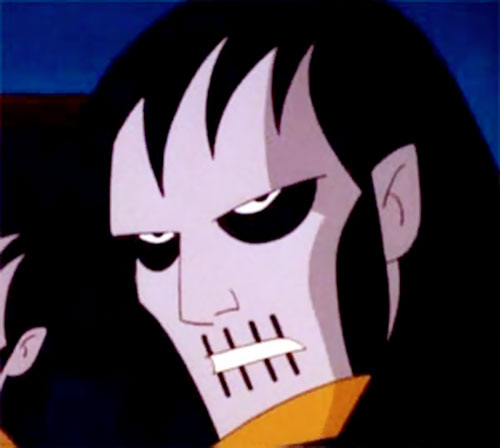 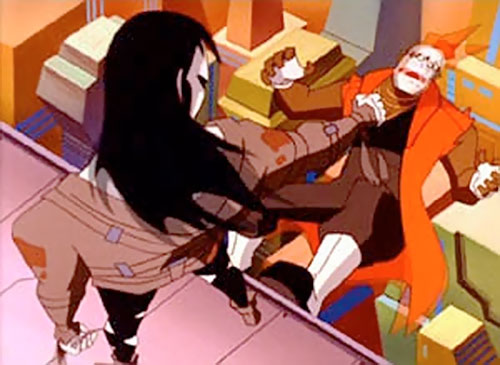