Terror’s powers are unique. His body, while on the decomposed side, is almost unkillable. His head and upper torso are superhumanly tough and able to regenerate, and his overall life force just won’t quit. He seems almost immune to pain.

So, you say, we can still chop off his limbs. He’s used to it, and doesn’t care much. He’ll borrow new ones. Terror can replace parts of his body (hand, feet, arms, legs, eyes, ears, nose…) with those of other organisms. If both his legs has been crushed, he’ll gladly kill an opponent, rip off the legs and affix them to his body.

He can even add parts which he does not normally possess. Frex he once ripped the wings off a demon, and stuck them in his back so he could fly. He’s also been known to use limbs from dead mutants, such as a acid-generating Morlock. He once bought the hand of an Adamantium  skeleton found in a poisonous landfill in Canada.

By affixing a part to his body, he can takes on skills and abilities of the person. For instance, the legs of an Olympic runner. The arm of a champion weight lifter. The teeth of a cannibal degenerate serial killer. The hand and wrist of an aikido master… or of a butcher accustomed to seeking arteries. The eye and trigger finger of a marksman.

In addition, he experiences the sights, sounds and sensations the body part once experienced. One favorite tactic of his to gather info is to take an enemy agent, rip of most of his face and use his sensory organs (plucking out his own eye to wear the agent’s eye for a time, etc.), to get an inside view.

Terror always has to fight the personal memories and desires of the person he just killed, or on whose corpse he took his parts. While it hurts, he’s used to it now.

He is an exceptionally resourceful and experienced operative, and seems to always come on top.

His history is undocumented. Doctor Strange does *not* like him, and calls him “enforcer”. Which, in Strange’s mouth, might indicate a mystic role.

Terror, Incorporated (his business) is a thriving international institution. He’s his sole terminating asset, but has about a half-dozen employees, such as tailor, negotiator, pilots, and so on.

Terror, Inc. is reputed to be able to properly execute “impossible” contracts. For instance, Terror managed to terminate an arms dealer which, due to a demonic pact, could not be killed.

Around the block once or twice

Terror has apparently always managed to fight the good fight in his own cynical, twisted way. He once indicated he took a stand against the forces of darkness since prehistory, and never hesitated to terminate evil individuals.

Apparently, Terror was a prehistoric man who fought a “thing ruling in the dark” to protect nascent mankind. But as a result of victory had to “wear the beast’s mantle” (apparently, these are the thorn/spikes on his head). This made him an eternal outcast.

He’s been an anti-hero ever since, growing always more “anti” as he steadily was rejected by those he sacrificed himself for.

The left hand of goodness

During medieval times, while he was a sort of black knight, he fought alongside a woman warrior. He loved her and, “remarkably enough”, she loved him. The fight cost the woman her life, but still has her hand on him. It is encased in a gauntlet to preserve it.

This lady’s hand seems to be behind most of Terror’s altruistic acts. The memories and character of the warrior influence the hand’s current bearer.

Terror’s body is mostly discomposed. It has a zombie-like yellow-greenish tinge. His head is a nearly skinless skull, his face has lost his lips and eyelids, and his canine are slightly elongated. A strange detail are three 10” “thorns” on each side of his face. He has no hair left.

Terror is a big believer in class. He always wear Armani, Dior Homme, Kenzo, Pierre Cardin and other haute couture suits. All of his pieces of clothing are custom-tailored. He chooses his ties and shoes very carefully, and often sports an expensive coat and an expensive hat.

Death is his business, and business is good. He’s a top-drawer professional hitman, and spends most of his time icing important criminals. His personal watchword, which he says very often is “nothing personal. Just business”.

Terror always envision everything in terms of business. When he flees, this is an early withdrawal from a bad investment. Shock, intimidation and violence are presented as his marketed goods. When he seems about to die, he talks about imminent insolvency. Taking body parts from a living man is corporate expansion.

Body parts are acquisition, or insider information if these are sensory organs. His own part are the manufacturer’s original product. Allies are assets. When he has a tactically advantageous position, the balance of trade shifts in his favor, and so on. He always talk like a businessman.

Terror has a way with words, and especially irony. He’s always making, in his own deadpan way, macabre puns about death, gore and body parts. He can threaten people with the worst fate in a smooth, polite way. He’s *always* polite, always cool, always smooth, and speaks in a highly formal way. He just oozes savoir-faire.

Deep down, Terror is a decent man, but you really have to know him. He’s been known to do “freebies” to protect a woman and her son on a Christmas night, and he sometimes do the Right Thing. But don’t count on it, unless you paid him to do so.

Still, it has been hinted that many persons owned him their life. He just keeps very, very quiet about this.

“As a prelude to this hostile takeover, it is obvious I am in need of inside information.” (plucks an eye out of a guard, insert it in his own eye socket).

(Assessing a skeletal Adamantium hand with three familiar-looking claws) “How much for just the claws ?”

“As for the nature of my trade, the capitalist merchandising of terror — marketed goods chiefly being those of shock, intimidation and violence — *this* is my business. And business is good.”

(Throwing away an arm he recently ripped off an evil priest to put a more muscular arm in place) “You’ve done your part. So to speak.”

(As he abducts a man right before TV cameras) “Ratings, ladies, gentlemen… and journalists ! Let the cameras roll — bring on the blood and gore !”

Hellfire : “WHAT are you ?”
Terror: “A businessman with an equitable trade in mind. Your metamorphosis results from a property called the Darksoul — I offer answers on its existence and its removal, when my conditions are met.”
Hellfire : “I won’t be part of any dirty work…”
Terror: “Your part only provides the means to cancel out an unfair and unholy advantage — a demonic pact, to be precise. I handle the dirty and the wet work.
Hellfire : “You’re blackmailing me.”
Terror : “An aleatory contract, yes, essentially unfair. Welcome down to my level, Mr. Drakonmegas.”

“You’re a valuable commodity, sir — and I protect my investments — even when such professionalism is decidely non compos mentis .”

(Ripping off the arm of a man with a large tattoo on the shoulder) “How convenient. Usually I have to label them myself.”

“You are mistaken, madam. I don’t do favors. I accumulate debts.” 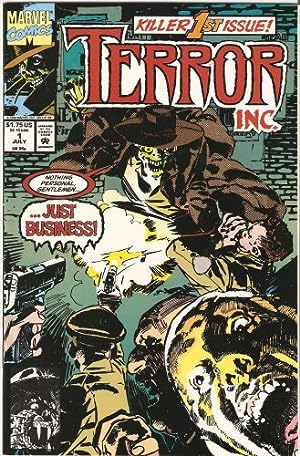 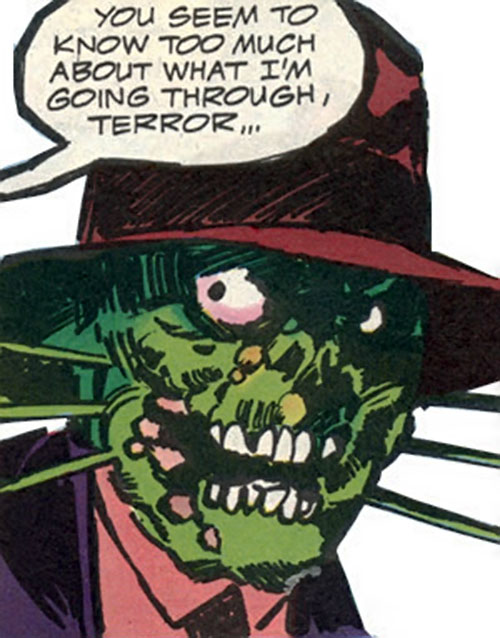 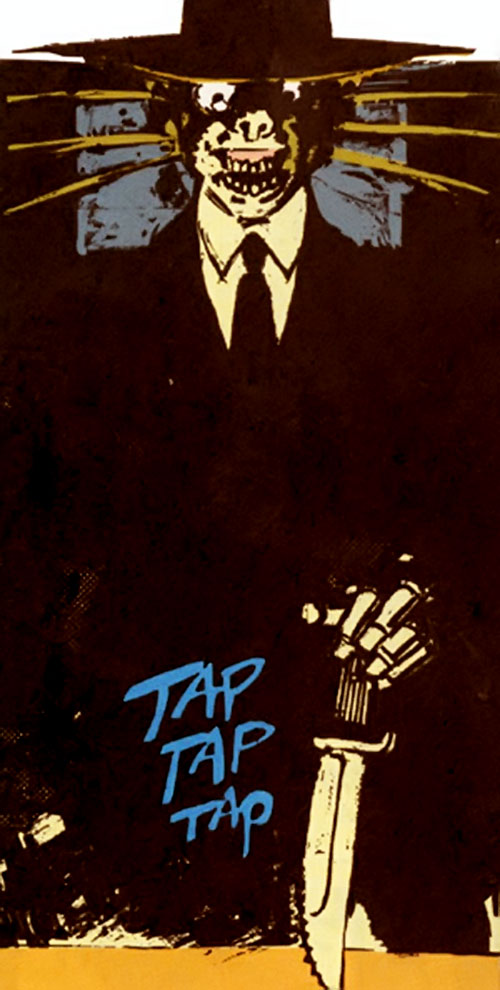