“Known to the world by the weird name, the Terror, this fantastic being possesses all the facilities of a normal human, injected with a certain virus from a mad dog. This strange human undergoes a complete physical change when angered. The body temperature rising with anger produces an extra agitation of the chemicals and in place of a cool, placid individual rises — the Terror — who carries the sceptre of Justice to the darkest dens of the underworld.”

The Terror is a relatively obscure Golden Age , who appeared in 1941-42. He was in Mystic Comics by Timely Publication, the predecessor of Marvel Comics.

The Terror made a comeback in The Sensational She-Hulk in 1990, but it didn’t quite fit in… anything. So this profile is chiefly about the character as seen during the 1940s.

I couldn’t peruse Mystic Comics #6 when researching this profile.

The Terror is tall man possessed with incredible strength and resolve. Although he does not look particularly acrobatic, he can perform cinematic  athletic feats. Such as leaping from a two stories high cliff onto the hood of a speeding car. According to a caption, he fights with “the fury of a thousand demons”.

Laslo Pevely does not seem to possess any special skill or ability. He obviously has no investigative skills. He may also fail to summon sufficient anger to turn into the Terror until the last possible moment. This usually happens when he has been defeated and is thus too demoralised to resist.

Apparently, being exposed to flame renews the strength of the Terror. He and his clothes do not seem to burn either, at least when thrown into a lit fireplace.

It was during a dark and stormy night

During that night of 1941, a burst of strange events took place in the isolated home and laboratory of famous scientist, John Storm.

A gigantic, enraged ape burst in from nowhere. Rex, Storm’s nondescript mutt, attacked the primate with unholy rage. As it did, the dog’s head warped to adopt a skull-like appearance.

Demonstrating incredible strength, the dog slew the ape. It then died from system shock.

Fascinated, Dr. Storm scooped the dead canine. He extracted the hitherto unknown virus that had given the mutt its super-strength and skull-like face. But while the scientist was working, more unlikely events occurred.

A tall, dark stranger (well, not quite)

Lightning felled a tree across the road, right in front of an unsuspecting motorist. The stranger, dressed in full evening attire, hit his head in the crash. After a while he staggered toward Storm’s house. Once there, the driver realised he could no longer tell whom he was. 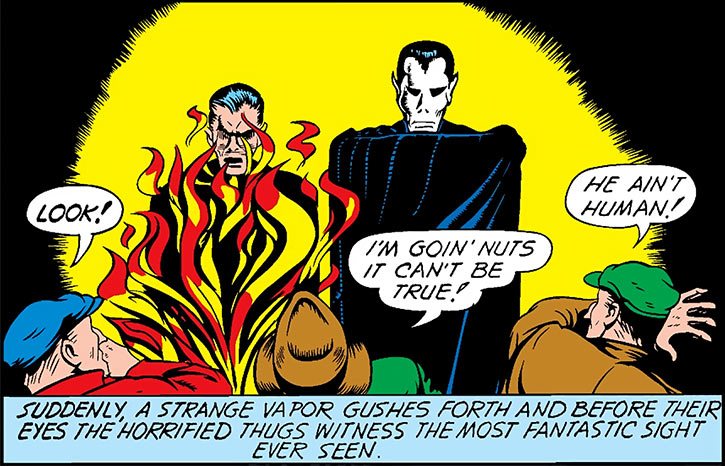 Dr. Storm determined that the man would never recover his memory. Reasonably enough, the scientist then decided to give him a future by injecting him with the virus. Thus, he could turn the stranger into “the most powerful foe of crime, since the annals of time”.

However, *yet* another unlikely event was also underway. A trio of thugs, led by a criminal named Greco, came to Storm’s house. They demanded that he help them in their unlawful enterprises. When he refused they beat him, fatally wounding him.

They were interrupted by the amnesiac stranger, who was overcome a terrible need to avenge the dying researcher. Scared witless, the murderers fled, declaring that “that guy’s a terror !”.

However, the Terror caught up with them as they were driving away. He killed Greco by twisting back the criminal’s pistol-wielding hand. The Terror then sent the car to crash down the hill.

Returning to normal, the stranger swore that “with your books and notes to aid me, the Terror shall continue your fight against crime and evil”.

The fight against crime and evil continues

In his subsequent adventure, he reportedly foiled the plan of one Decker. This Nazi spy was about to shrink President Roosevelt to a mere few inches of height.

Pevely (likely living in professor’s Storm place and using his savings) later read about robbers attacking small businesses in a nearby town. One man had died during such a robbery. Angered by the news, he turned into the Terror, who decided to take the looters out.

Soon, Pevely was shopping at random in the nearby town, hoping to stumble onto the looters. He soon did. But during a melee against the entire crew, he was knocked out from behind. The looters decided to execute him and make an example of him to further cow the locals. But Pevely changed again and punched out the leader as the surviving criminals fled.

His work done, the Terror faded into the night… ever in search of new adventure !!

Because evil lurks in the heart of men, I suspect

Somehow, Pevely was next seen “in Europe” (likely the UK). There he read in the papers about ships of refugee leaving Portugal for the US but never arriving. Incensed, he travelled to Lisbon to investigate. There, he soon noticed a shifty-looking boat captain.

Embarking, he soon realized that the man was a Nazi agent. The boat would deliver the hapless refugees to the Sahara. There, along with French POWs, they would be forced to construct a railway crossing the deadly sands until they died.

The Terror knocked out all of the Fascist scum. Then he commandeered the ship, which he took to America. When they nearly reached their goal, they spotted a German sub in American waters. Pevely had the refugees transfer to rowboats, then raised the British flag on the main boat. As a result, it was sunk… along with the Nazi agents that were still held in the keel.

The Terror later went to the Sahara to kill the Nazi foremen at the railroad construction site.

Pevely later learned about a murder in the newspaper. It had been committed by the new criminal conspiracy of “the Old One”. It was a band of poison-using hitmen known as Poison, Inc. Suspecting that the worst enemy of the victim was behind the contract, the Terror beat up a confession out of him. He then proceeded to dismantle Poison Inc..

However, when he reached the Old One, he was knocked out from behind by a henchman. The killers then threw him off a jetty. However the water revived the Terror, and he took out the Old One and his henchman. The mastermind fatally poisoned himself before he could be arrested.

Later, the Terror happened upon yet another sinister plot. Gangster “Bull” Murdock had allied with the masked Mister Z. They forced men who had recently taken a huge insurance on life to designate an alias of theirs as the recipient. Then they murdered the policy holder.

Hit by a car from behind, the Terror could not stop them after they committed the first murder. But he soon laid a trap by taking a large insurance as Pevely.

However, during the melee, Mister Z knocked the Terror out from behind. Hoping not to leave a body behind, they threw the unconscious Terror into a large nearby fireplace. This merely revived him, and he punched everyone out. He then unmasked “Mister Z” as the president of the insurance company.

The Terror then continued his unending search for crime.

When he turns into the Terror, Pevely is surrounded by a strange vapour. It looks like misty flames.

The Terror’s appearance varied. Thus, I’ve stuck with the illustrations from his first depiction. The “skull face” varied, though the Terror always wore the same evening attire and cape. In his subsequent appearance his face seemed somewhat demonic or goblin-like. But it continued to more or less resemble a sort of skull. Mostly.

The Terror is a Gothic avenger, a sort of vengeful vampire taking out evildoers like last week’s trash.

He doesn’t really have a personality. He just spouts some of the quotes below and beats bad guys up.

Pevely seems to be a mild person serving his Terror alter-ego. He prefers to transform into his monstrous form when no-one can see him.

The Terror never kills directly and by his own hand. He will wrestle opponents so that they shoot themselves, drive cars off cliffs, trigger explosions, let villains kill each other, etc.. But he does not use straight Killing Combat. This odd hypocrisy was common in Golden Age  stories.

“They’re killing an innocent man ! They must pay for this — they must !”

“The fiends ! The heartless fiends !” (one of his favourite exclamations)

“Prepare for your doom !”

“So, an organised mob of thugs are robbing the little fellas, eh ? Picking on the poor people, are they ? People who can’t fight back ! Well, we’ll see what the Terror can do about it ! It will be a fight to the finish between those curs and the Terror ! And the Terror shall win !”

“I wish I could do this to every crook in the world !” (crash)

“This is the only language you understand !” (slam !)

“And now, merciless ones, you shall pay for your horrible deeds !”

“The hour of judgement is at hand — you killers !”

The Attack Vulnerability is a Genre Rule, really. But we prefer to list them as Drawbacks so people don’t forget.

Drawbacks:
Alter-Ego (The Terror — must be very angry to change).

Normally I’d write him as Pevely, and have a Power granting him the power of the Terror… except that Pevely is useless. So his entire character sheet (except for knowing how to drive) would be contained within the Power, which would be pointless.

Check whether a *second* TPB of Mystic Comics now exists 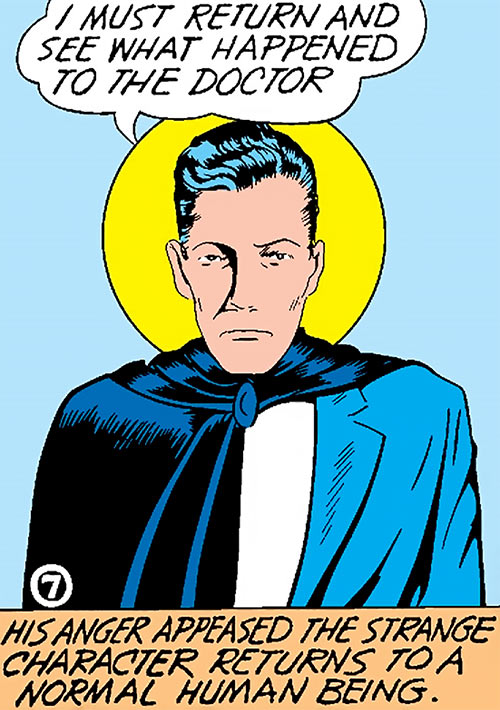 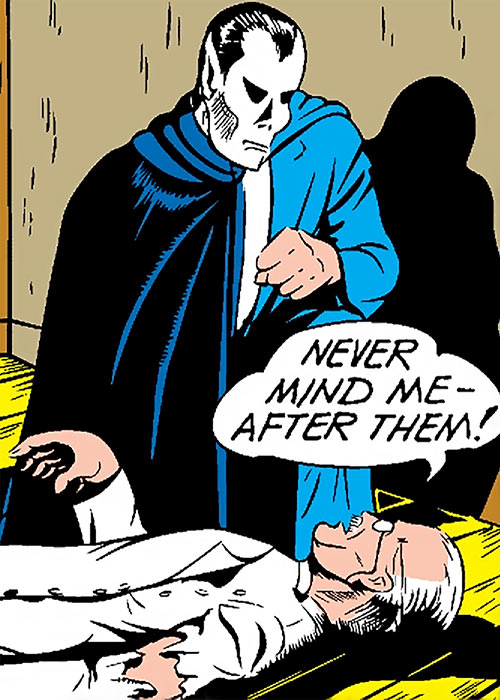