TESS-One is a giant humanoid combat robot with great strength and durability. Weapon systems include :

Oddly enough the robot has no scent whatsoever.

The combat programs are incredibly efficient. As a result, the robot is very quick and accurate with its weapon systems. It also is an excellent hand-to-hand fighter, easily dealing with man-sized opponents.

TESS-One is also very resilient. Even in its original construction, Wolverine had difficulties scoring a telling hit despite having Adamantium  claws.

Decades after its construction, Overrider had the robot coated with Adamantium. Whether it was “primary” Adamantium is unclear. In any case, the process was interrupted after fewer layers than planned had been used on the robot.

Nevertheless, it made the robot nigh-indestructible – much like most models of Ultron robots. Like with Ultron, the joints are not covered with Adamantium – if they were the robot would be unable to move. But those are very small targets and exploiting them requires superior planning and accuracy.

As if that weren’t enough, Doctor Doom later made TESS-One regenerative. He gave it the ability to absorb energy and metal to repair damage.

Ahead of its time

For a product the 1940s, TESS-One is amazingly potent and sophisticated. There are precedents, though. The two Arsenal robots built by Howard Stark, Zemo’s Destruction android, or the German Schläfer (Sleeper) robots are rough contemporaries of the TESS robot.

Some references imply that the TESS technology was later incorporated in Sentinels technology and what eventually became Project : Wideawake.

The TESS project started on 2/2/39. It followed right on the heels of Project : Rebirth. Rebirth was later renamed Weapon One when it became the seed project for the Weapon Plus NATO program. This project sought to produce super-soldiers who were as physically fit and powerful as humanly possible.

Wary about such a “master race” turning on them, Roosevelt and the Joint Chiefs of Staff funded the work of one Daniel Schumann. Schumann had been advocating for failsafes against potential rogue Rebirth super-soldiers ever since the research started.

Schumann’s creation was a gleaming giant combat robot. The first such prototype of the TESS program was code-named TESS-One. Schuman was apparently a genius, since his combat robot was very powerful. Since Tess-One was apparently never deployed. It also seems likely that other researchers couldn’t understand his technology well enough to work with it.

However, Rebirth came to an impromptu end when the head researcher, doctor Erskine, was assassinated by a Nazi spy. Officially, Rebirth only ever produced one super-soldier, Steve Rogers, who soon became Captain America. But other subjects include Protocide and Isaiah Bradley.

Thus, the TESS program became irrelevant. It was shut down on 9/14/40, only ever producing one killer robot.

Schumann was told to dispose of the prototype, but did not comply. The engineer took it home in an Omaha suburb. He continued to work on it with his own resources, improving it by an unrevealed margin.

The somewhat paranoid (or at least very careful) Schumann then constructed a secret underground bunker. It had numerous defences (including poison gas, machineguns and spikes-filled pit traps) to safely store TESS-One.

During the early 1970s Schumann died. His house was eventually sold and torn down. The land became the parking space for a fast food place. However, hidden bunker was not discovered.

In the mid-80s the mercenary cyber-telepath the Overrider somehow learned about the TESS project and Schumman’s subsequent work. Having an ambitious plan to destroy American nuclear weapons he came to Omaha, and telepathically awakened TESS-One. The Overrider had the robot burst through the parking’s ground, then tested it on the nearest superhuman – Nuklo.

Thankfully, Wolverine stumbled upon the fight and saved the hapless Nuklo’s life.

Satisfied with TESS-One’s performance, Overrider flew away with it. He then hijacked a 18-wheeler and drove the robot to an Adametco plant. Adametco is the company holding the secrets and patents to the Adamantium production and use processes.

Using his powers, Overrider rendered the entire security system less than useless. Then he had TESS-One burst into the plant, and forced the few workers present at that hour to start coating TESS-One with Adamantium.

While the process was almost complete Captain America and Wolverine came to investigate. But the Overrider stopped the fight and had TESS-One fly away with him.

The Overrider then unleashed TESS-One on the US’s Nuclear Command Center, telling it there was a super-soldier in the base. While the military was futilely attempting to stop the giant robot, Overrider proceeded with his planned sabotage.

Captain America and Wolverine came in and decapitated TESS-One. Wolverine ran his claws into the robot’s throat through a thin joint, and had Cap hammer on his hands with his shield to drive them deeper. The two heroes then stopped Overrider.

Years later, the Super-Adaptoid (disguised as the Fixer) stole a number of robots. The Avengers considered that TESS-One was a likely target. Thus, they came to pick it up from the military base where it was being held (with a reattached head).

However the Adaptoid and two of his stolen robots (a Kree Sentry and Machine Man) hijacked TESS-One from the Black Knight (Dane Withman). They reactivated it and TESS-One joined Heavy Metal, an all-robots group.

Heavy Metal attacked Hydrobase, which back then was hosting the Avengers, to liberate the Awesome Android. She-Hulk (Jennifer Walter) and Marrina teamed up to shove TESS-One overboard, and the giant robot sunk like a stone.

An inert TESS-One was recovered by the US government. Secondary sources indicate that the robot was stored on Hydrobase, and sank once again when the artificial floating island was destroyed.

Doom wished to use the robot during the “Acts of Vengeance” conspiracy. Thus, he repaired and upgraded it at the Latverian embassy in New York City. He needed the nearly indestructible TESS-One to face Spider-Man (Peter Parker), who back then wielded the cosmic energies of the Uni-Power. 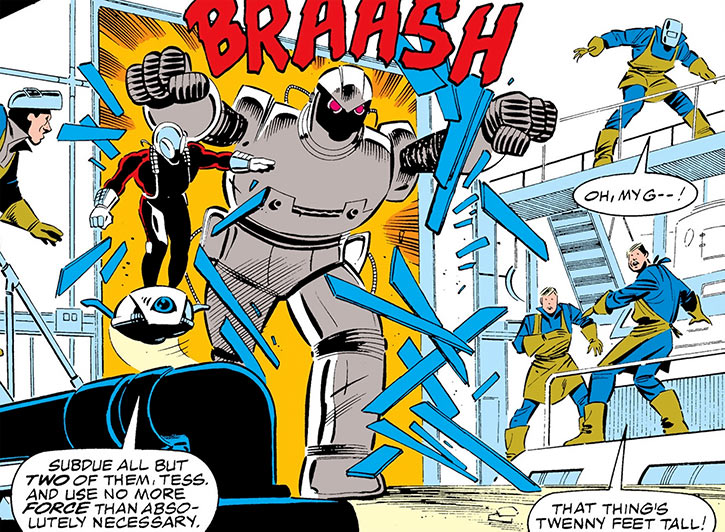 TESS-One could withstand “cosmic Spidey”’s power to an extend. Yet after a direct punch it had to “eat” I-beams from a bridge to repair the damage. Spider-Man eventually poured a huge energy blast at the robot. While that did not destroy the Adamantium, that shattered every joint and left TESS-One in pieces.

Doom did not mind. He recovered the head of the robot, where he had installed sensors that analysed the cosmic energies unleashed against it.

One suspects that the self-repair systems built by Doom were not destroyed, and that metal and/or electricity would allow TESS-One to reconstruct itself.

TESS-One is an efficient fighter. It only talks when it is closing on the super-soldiers he has been created to eliminate.

Modifications made by Doom made it more talkative, since it was told that all of its targets were super-soldiers who had to be eliminated.

Before the Adamantium application, TESS-One did not have Skin Armour.

Before Doom tinkered with it it did not have Regeneration (or perhaps low APs of it – say, 02). 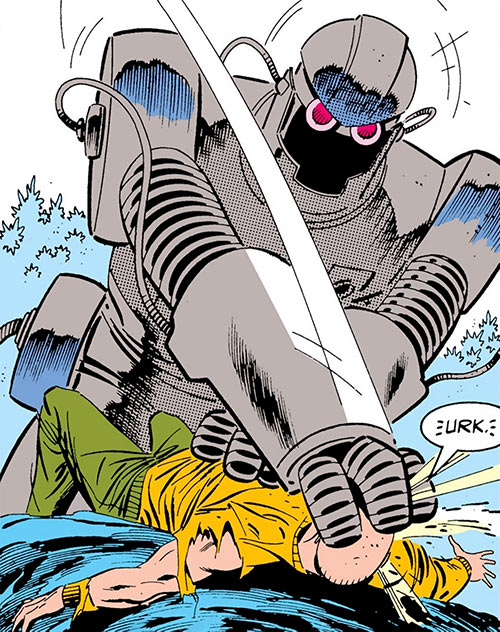 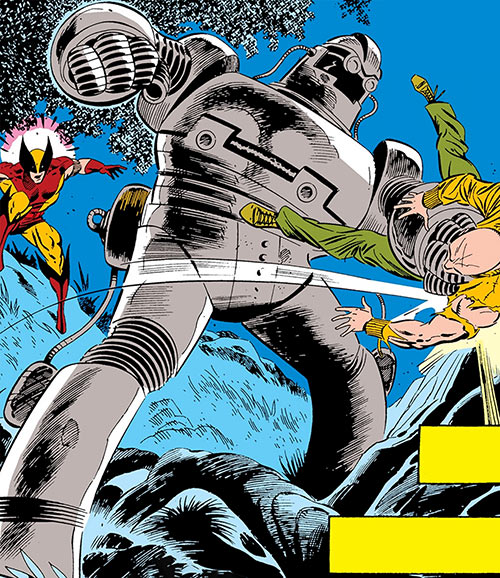