Tessa is a mutant whose powers make her a living computer. She has a perfect photographic memory. She can make complex calculations and analysis.

At this stage, little is known about this woman. She became Sebastian Shaw’s personal assistant at the time he reached The Inner Circle of The Hellfire Club.

Donald Pierce attempted a coup to overthrow the Lords Cardinal. He abducted Tessa, estimating that Shaw to be unable to function efficiently without her. He may have been right, but Xavier’s freshly assembled New Mutants foiled his coup.

Tessa took charge of putting Pierce away in one of Shaw Industries’ estates. Years later, when The Reavers set Pierce free, she investigated the bloody scene they had left behind.

While Magneto was in charge of The New Mutants, he became White King of The Hellfire Club. He used the Hellfire Club’s resources to track Karma’s missing siblings. Shaw helped by dedicating part of Tessa’s time to do the search. It proved fruitless.

Karma doubted the Hellfire Club was devoting as much resources as they pretended. She wanted to check for herself. She possessed Tessa. Tessa resisted and Karma had to pour all her will to break Tessa’s mental barrier. Karma forced Tessa to give her access to the Hellfire Club’s computers.

Magneto and Shaw interrupted her. Magneto explained Xi’an how they were, indeed, trying, but found no lead.

After Shinobi Shaw apparently killed Sebastian, Tessa stayed in service of the new Black King for a while. She was faking loyalty.

Some times later, we saw her beside Sebastian Shaw again. During this period, she dropped the Hellfire Club’s dress code, as did Sebastian. She wore more practical clothes like a combat suit for action or crop top and shorts in hot weather.

They had allied with Holocaust, Apocalypse’s son from the Age of Apocalypse ’s alternate reality. Tessa demonstrated telepathic abilities for the first time. She used it to calm down Holocaust and interest him to Sebastian Shaw’s plan.

Holocaust captured the members of X-Force. With a bit of telepathic suggestions and plain brainwashing techniques, Tessa conditioned the young mutants to obey Sebastian Shaw. He sent them to kill Cable.

During the battle, Cable’s powerful telepathy breached Tessa’s conditioning. The training he gave to his X-Force soldiers did the rest. They broke the conditioning and escaped Shaw’s grasp.

Later, Onslaught neutralized Tessa and Shaw and convinced Holocaust to join him.

During Sebastian Shaw’s secret return to power, Tessa showed more independence of speech. She voiced her concern against reinstating Selene as Black Queen.

Her last known mission for Shaw was to track X-51 a.k.a. “Machine Man”. The Black King claimed part of the technology composing this artificial being.

Tessa demonstrated yet more independence, even teasing Shaw or being sarcastic with him. Curiously, she no longer used telepathy, even when it would have been most appropriate.

The next time we saw Tessa, she tried to dissuade Senator Kelly to run for the presidency on an anti-mutants platform. She confessed no longer working for Shaw. Indeed, she had joined The X-Men.

Tessa is a striking woman with piercing blue eyes. She wears her long black hair in a top bun.

She follows The Hellfire Club’s dress code for women as suits her rank in the organization, which is quite unique. She wears black knickers of leather or lace, topped with a black bustier of leather or lace with garter straps holding black silk stockings. She has black high heeled shoes or thigh high leather boots. She usually has long black gloves.

Sometimes, when in private with Shaw, she might wear pink instead of black.

She wears a black choker, a usual sign of inferior condition for women serving in The Hellfire Club. The maids have one, even the White and Black Queens have one.

She’s faithfully and unfailingly loyal to Sebastian Shaw. She’s always behind him when he’s in business. He trusts her with his more intimate secrets.

We could speculate them to have an even more intimate and carnal relationship. But she never betrays any sign of affection: only cold professionalism. Selene once matter-of-factly referred to Tessa as Shaw’s mistress, but odds are that it was been a baseless verbal jab at Shaw. On the other hand, it wouldn’t be out of character for Shaw to behave this way. 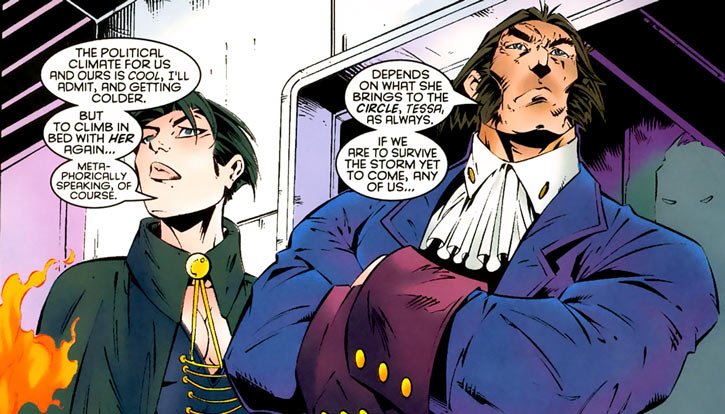 She rarely speaks without Shaw asking her to. He does when he requires her analysis or to recall details of a former situation.

All this makes her look like the perfect living computer.

On the rare occasions where she appears without him, she demonstrates insightful initiatives and abilities.

Tessa might be another relative of Noah Kuttler, aka the Calculator.  He already has a daughter, Wendy White, aka Proxy, who is a technopath.

Another possibility is that she is a survivor of the Amazo virus, like Reggie and Sara Meyer.

“I have a solution, Charles. Leave him to me. The Hellfire Club takes care of its own. Pierce has proven himself as great a threat to us as to you. I think you can safely assume you’ve heard the last of him.”

Shaw: “Where did she go, is the witch a teleporter ?”
Tessa: “No, Sebastian. She created a momentary trance effect -Instant transitory hypnosis- then slipped away before we recover our wits.”

(Thinking to herself, intensely staring at Shaw while Selene offers him Rachel Summers on a leash)
“Take the gift, Sebastian ! Use it to destroy Selene !”

“Wolverine’s intervention -The fact that he inflicted a near mortal wound on a putative comrade- indicates that Phoenix may have broken with her teammates, and become a rogue operative.”

Shaw: “Tessa, analyze and evaluate. What have we seen here ?”
Tessa: “Most probably a specific voluntary transmutation talent akin to lycanthropy , activated through some psychic interface… With Selene’s own power.”

“The Lords Cardinal can no more afford to be found here than you X-Men. I offer the sanctuary of the Hellfire Club. Let this truth last a little longer. In Shaw’s name, I guarantee your safe conduct.”

(Investigating the scene where The Reavers set Pierce free)
Guard: “Should we alert the Lords Cardinal that the deposed White King has escaped ?”
Tessa: “This is Shaw Industries property, Mr. Lewis. And Sebastian Shaw is no longer one of the Lords Cardinal. This is none of their business, or anyone else’s.”

“The political climate for us and ours is cool, I’ll admit, and getting colder. But to climb in bed with her again… Metaphorically speaking, of course.”

“Sebastian… I suggest you look again. Closer this time. Deeper. Past the facade of flesh.”

“I’m loathe to say it, but while similar in capability to your technology, it seemed as if the capabilities manifested by X-51 were more advanced.”

“Sebastian Shaw and I have parted company. I have returned to an earlier affiliation.”

Bonuses and Limitations:
Detective and Scientist are Powered Skills (BC -5).

I consider the emergence of her telepathic powers as foreshadowing of her retcon  as Sage. This is because they don’t add up with the rest of her career.

Several times, an ability to alter people’s actions from behind the scenes, by someone totally devoted to him, who is not Emma Frost, would have been a tremendous asset to Shaw. Yet he never used it. Even the telepathic link is doubtful. She would have used it on several occasion to warn or report to Shaw.

It doesn’t really fit the “secondary mutation” concept either. It just comes and goes without a single word of explanation, or any comment from the characters.

If you want to add these abilities anyway, add the following :

The Marginal limitations makes it hard for her to use without Shaw’s Leadership to fulfill the HPs requirement.

Source of Character: Marvel Comics, essentially X-Men until her betrayal in X-Men vol 2 #102 in 2000. 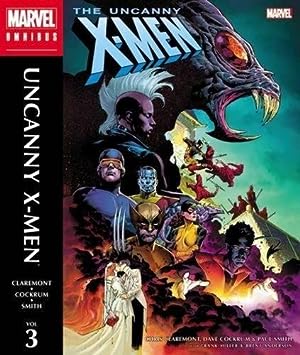 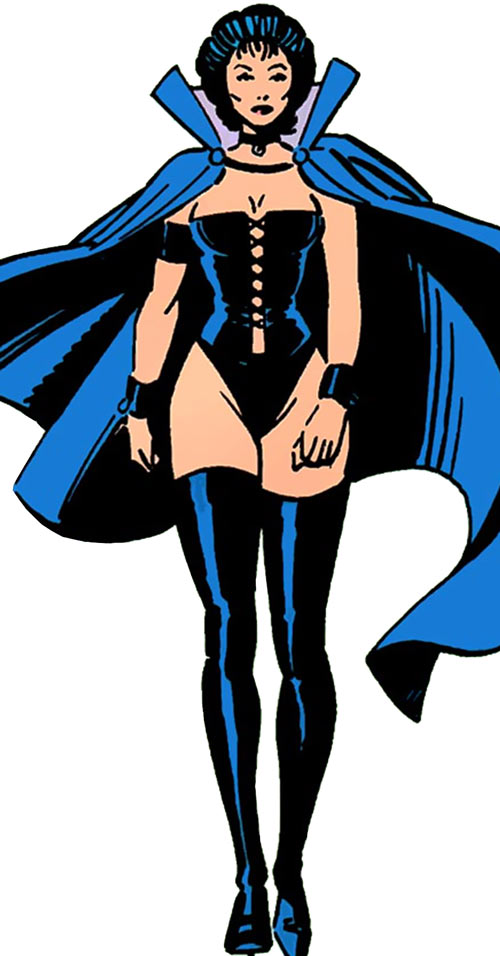 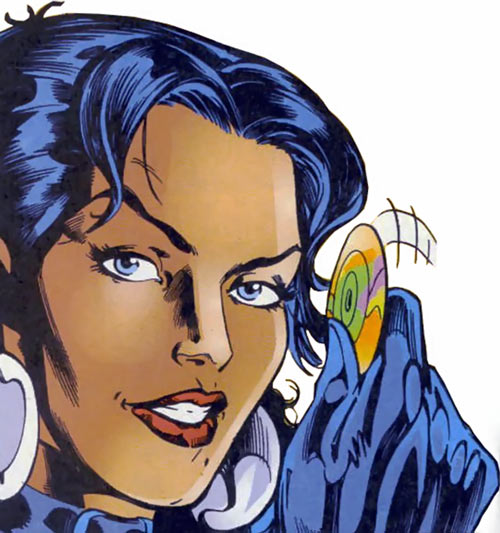 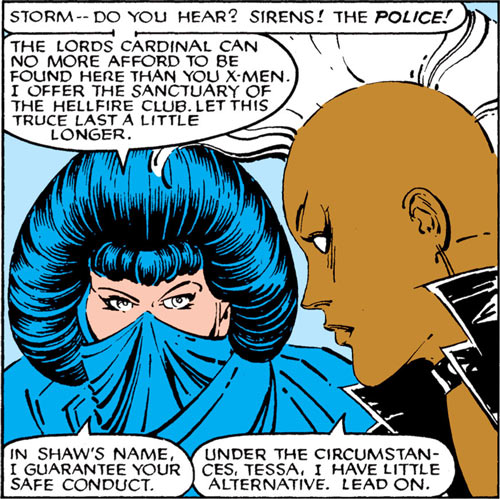 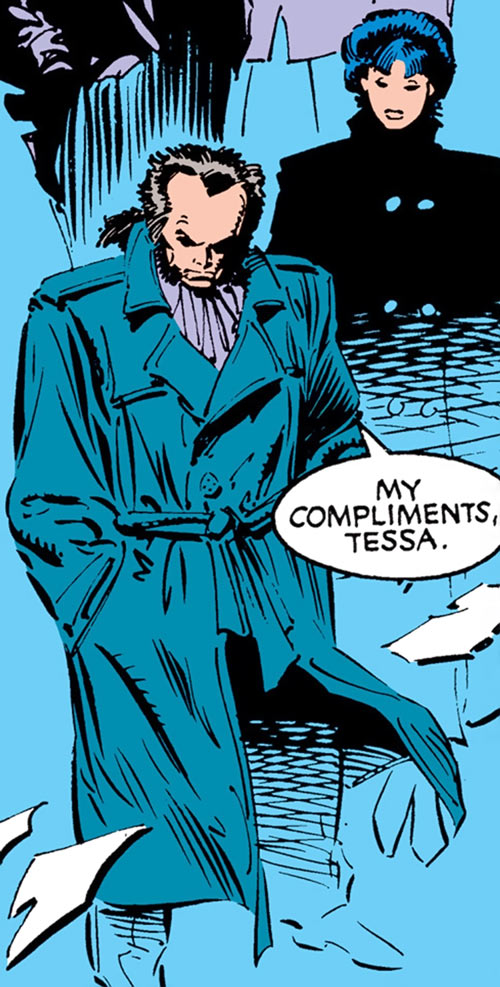 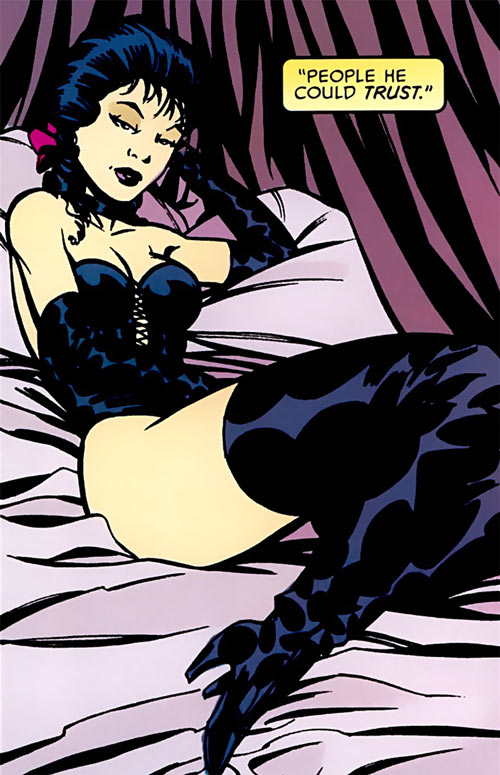