Texas Twister can telekinetically control air molecules for a variety of effects. This roughly amounts to creating powerful tornadoes that can bear him or others aloft. This enables him to travel just above the ground at speeds of up to 225mph, or even fly high above the ground when he puts his mind to it.

He can direct powerful, damaging winds at others, or even wrap a mini-tornado around his fist to enhance his punching power.

His body has adapted to high winds and spinning. So his skin is much tougher than normal, and resistant to heat loss. He is immune to any naturally induced vertigo.

Drew Daniels was wrangling stray cattle when a sudden storm hit. He was near a nuclear power plant at the time a tornado touched down near one of the site’s waste storage areas. Getting caught in the funnels path, he was bombarded with radiation sucked from the plant, as he was drawn up into the maelstrom. The radiation mutated him, giving him the ability to generate tornadoes at will.

After quitting his job and donning a custom-made costume, he journeyed to the east coast, seeking fame and fortune. What he found was a classified ad placed by the Wizard. The newly dubbed Texas Twister answered his ad about filling the perpetual vacancy in the Frightful Four. After learning of the group’s criminal intents he declined membership.

He then applied to the espionage agency SHIELD, and was enrolled in their umpteenth super agent program. For months he trained under the Falcon with the other Super-Agents until half of them proved to be traitors. The program was scrapped and Twister became a free agent.

On the rodeo circuit he met, fell in love and began to live and work with Shooting Star.

Hoping to garner favorable publicity, the two answered a distress call by Rick Jones intended for the Avengers. They soon joined other heroes against the Hulk, who was under the influence of the Corrupter. He and Shooting Star, along with Night Rider, Firebird, and the Red Wolf formed the Rangers, a southwestern based superteam.

The team was short lived however, and at some point Shooting Star was replaced by a demonic doppelgänger named Riglevio. Sent by Master Pandemonium the double brought the Rangers in conflict with the West Coast Avengers.

After the revelation of his lovers disappearance Texas Twister sought out to find out what really happened. He ultimately exorcised Riglevio with the help of Hawkeye (Clint Barton) and Shooting Star herself.

More recently, after the Civil War, the Texas Rangers have become the official, registered super-team in Texas. In DC Heroes RPG terms, all members have Credentials (Initiative, Low) and access to Extensive Headquarters as members. 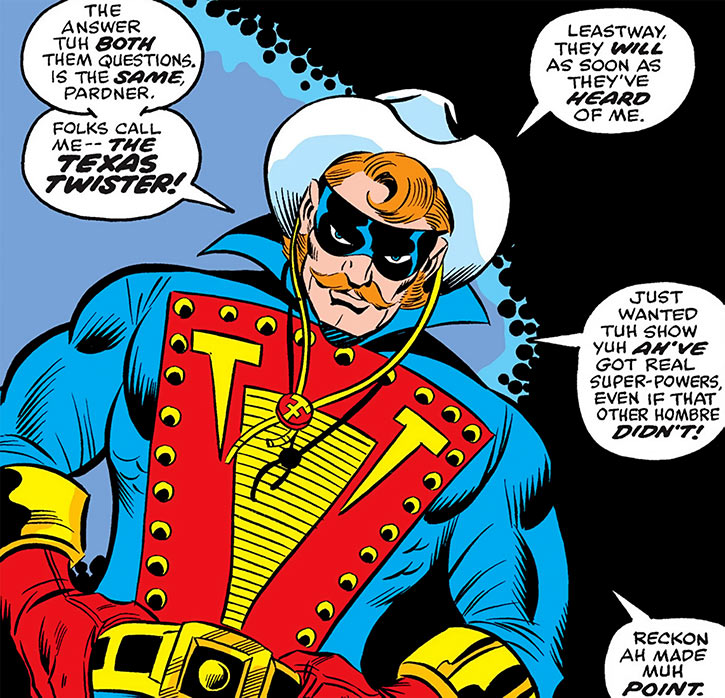 When the Secret Invasion started, it was revealed that Lobo, Red Wolf’s companion, was an infiltrated Skrull . They fought against him, until Shooting Star killed him.

Texas Twister and Shooting Star joined with both the Initiative and the Skrull Kill Krew in the final combat in Fort Hammond. There, the blonde Texan lady was apparently killed by lethal gas.

Twister is a tall rangy Texan, with wide shoulders and slim waist. He wears a blue cowboy outfit, and white cowboy hat. His costume is red on his chest southwestern style, with two yellow “t”s. He wears red gloves ending in yellow metallic forearm guards.

Drew is a down-to-earth, no-frills cowboy through and through. On top of that he is an archetypal prideful Texan, and always wanting something “bigger” since everything’s bigger in Texas. While easily seduced by wealth and money, he’s basically decent and never would do anything too criminal.

OTOH he’s not likely to put himself at risk to fight for honor, justice and the Texan way. However, he could be goaded into a fight to defend his personal honor. He is very loyal and is prone to act first without thinking.

Texas Twister can be found at any superteam recruitment drive, as long as the pay is good. As a member of the Rangers, he fits into any southwestern adventure. One could even replay the demon influenced Rangers against any DC superteams. 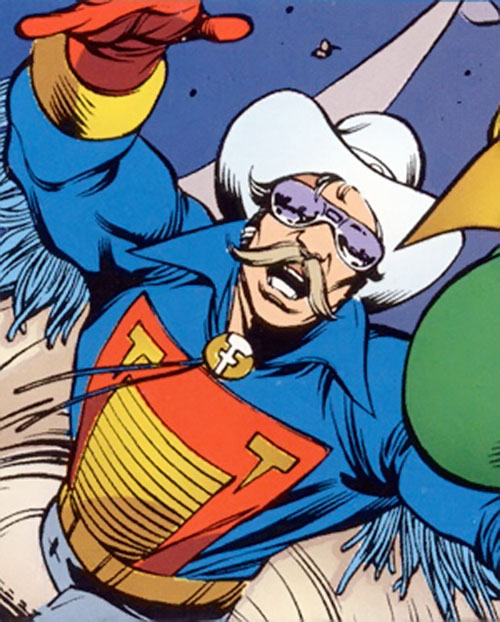