Superman (see Superman sourcebook  or any edition rulebook) gets a message from Dr. Mist (see Magic Sourcebook ) to meet him to deal with a great threat.

Superman shows up at Dr. Mist’s HQ, where he is told of the villainous Thaumar Dhai. Dhai was an Atlantean sorcerer 12,000 years ago (I should check to see if this contradicts the Atlantis Chronicles…) in fact his six talismans made him the mightiest.

These talismans consisted of:

(You can tell this is an E. Nelson Bridwell story, can’t you ?)

Fate of the talismans

When Dr. Mist and Dhai fought in Kor (where Mist ruled), Mist, unable to defeat Dhai, banished him from Kor. Dhai, however, went on to do evil in the Fertile Crescent (Egypt, Sumer, Babylon, and Assyria), losing his breastplate in what is now Israel.

Dhai continued to travel the world, losing talismans wherever he went. His necklace was lost in Ireland before the Celts arrived, his armlet was lost in Greece during the heroic age, his crown was lost in a pre-Inca city, and his scepter in Japan, a mere 1700 years ago.

Without his talismans, Dhai was destroyed. However, it remains possible to revive him with those six lost items. Looking into the future, Mist can tell that nothing can stop certain wizards from reviving Dhai!

So, Superman and the Seraph fly out and encounter Seraph’s old foes Ashtoreth and Moloch. These “bear the names of ancient deities”, as opposed to *being* ancient deities.

Superman flies at Moloch, who hurts Superman with his flaming body before punching him with his “mighty, magical strength.”

Then Ashtoreth blinds Seraph with her moon-amulet, causing Seraph to cry out, “Joshua’s shofar! You never used THAT spell before! I’m as blind as Samson in slavery!”

While the villains are distracted with Seraph, Superman has apparently found the breastplate which the villains seek, and arrives holding it. Ashtoreth, however, pulls it from his grasp with magical magnetism, and teleports herself and Moloch away. One down, five to go.

Superman then arrives in Greece to team up with the Olympian. They encounter Echidne, an old foe of Olympian’s. (She has no relationship to any other Echidne or Echidna in the comics.)

Superman and Olympian easily battle them, despite Echidne’s complaint that being magical they should be able to hurt Superman. (However, as they have no magical powers, they cannot). Superman finds the armlet, and shows it to the Olympian.

Echidne then summons forth the Hydra which snatches the armlet from Superman’s grasp, as Echidne teleports herself and the Hydra away. Two down, four to go.

Superman arrives in Denmark to team up with the Little Mermaid, and they swim down to “one of the Atlantide cities that *didn’t* survive the sinking of the continent.” (Oops. I’m almost certain that’ll contradict the Atlantis Chronicles …)

Søtrold causes the skeletons of the city’s original inhabitants to rise up and attack. These skeletons are hard to defeat, as they won’t stop even when smashed completely. Supes and the Little Mermaid have to spin at top speed to throw the skeletal parts in all directions.

Supes finds the belt, and Little Mermaid swims away with it, allowing Søtrold to punch her out and take the belt. The Sea Troll is gone by the time Superman arrives to help her (?). Three down, three to go.

In Ireland, Superman teams up with Jack O’Lantern and his friend Fergus of the Sidhe (pronounced Shee). Actually, Fergus is a fir dhearga  (whatever…). They fly towards one of the “fairy hills” some of which “still hold relics of ancient times.”

At midnight, when Jack’s powers are at their height, they fly through a hill into a cavern where they meet Jack’s old foe, Dubh Magus. Magus has already found the golden necklace. (D‘oh!)

However, Jack can and does teleport Superman away. Lupus is sent to sniff out Superman (the wolf flies through the wall). Meanwhile, Dubh Magus conjures up the imps of the inferno with the power of his Blackthorn stick.

Narrowly defeating the imps by creating a flaming cross with his lantern, Jack is helpless, as Lupus drags back Superman through the wall, along with the necklace. Magus grabs the necklace and teleports himself and Lupus away. Four down, two to go.

In Brazil, Superman teams up with Green Fury. Her magical powers include Instachange, Flight, Flame Project, Cold Project, and Hypnotism – unlike the post-Crisis Green Flame/Fire.

They fly towards the pre-Inca city, where they encounter El Dorado. El Dorado is *not* the Superfriends TV show character; instead, he is one of Bushmaster’s old foes.

He conjures up spirit jaguars which can hurt Superman, yet Superman can’t touch the intangible creatures. However, since Green Fury’s fire is magical, it can hurt the jaguars.

Superman finds the crown, but a jaguar snatches it from his grasp. El Dorado takes it, and teleports away with his jaguars. Five down, one to go.

In Japan, Superman meets up with Rising Sun. They travel to Mt. Fujiyama, where they encounter Rising Sun’s old foe, Yuki-Onna the Snow Woman. She conjures up a fubuki (a blizzard) to stop them. Not even Superman’s superbreath can defeat it.

However, Sun knows that she is vulnerable to his heat powers. Before he can make use of this fact, she conjures up her giant friends the Oni, whose “strength is great, as is their magic—but their intelligence would shame a monkey!”

Rising Sun uses Flash on one Oni, while giving a bad sunburn (?) to the others with ultraviolet rays. While they are distracted, Superman finds and snatches the scepter. Yuki-Onna sends the Oni after him. Supes flies into the sea, but they follow and wrest the scepter from him.

They return to Yuki-Onna who teleports all of them away. Six down, none to go.

All according to plan

Have the villains won ? Then why does Rising Sun say “But—our plan worked!”

On Easter Island, the villains use the six talismans to revive Thaumar Dhai. After they finish, the heroes, hiding behind those big head statues, rush out to stop them. Dhai animates the statues, but his magic is weak, and they are easily defeated.

Jack and Fury use their magical attacks on Dhai, and the spell which revived him is undone. (The fate of the talismans is unclear.)

The magical villains are then easily defeated:

Then Dr. Mist shows up and turns these international heroes into a group called the Global Guardians.

Ashtoreth prefers to use moon-based powers (light, magnetism, etc.). I have also assumed that her “moon amulet” is just a special effect of the use of her Sorcery power for Flash.

“I am the greatest villain in all Ireland !”

Powers:
Claws: 05, Intangibility: 09, Life Sense: 10 (he couldn’t have really sniffed out someone who was teleported away), Analytical Smell/Tracking Scent: 06

Bonuses and Limitations:
Intangibility can make others who are touched intangible.

Attack of the imps from Hell

Dubh knows how to summon the Imps of the Inferno (see Summoning under Dimension Travel ; he is summoning them from Hell). Imps have 03s for all stats, as well as Shrinking: Always On of 06. Dubh summoned ten at once, and they Team Attacked. They have a Catastrophic Irrational Fear of the Christian cross. 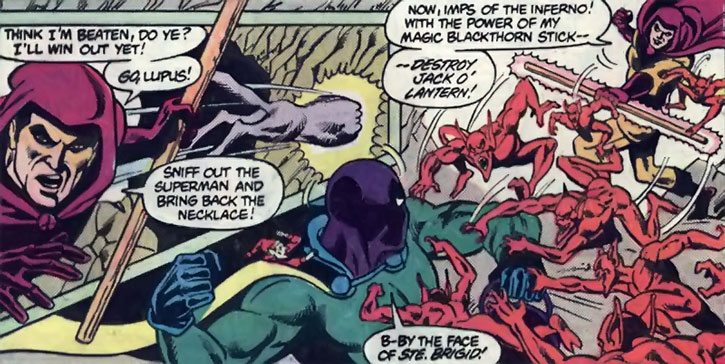 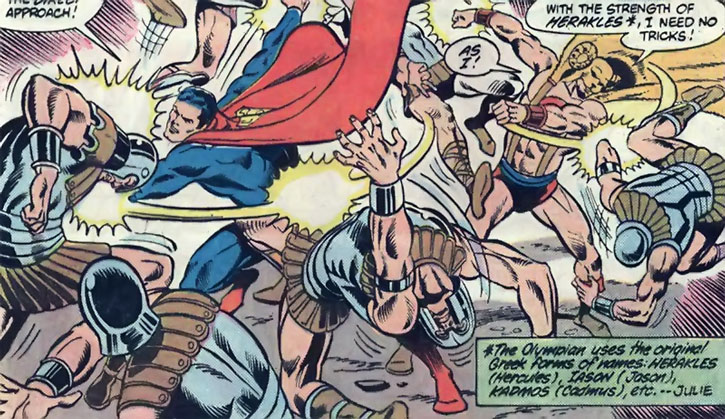 Bonuses and Limitations:
He uses Sorcery only to somehow summon his pet spirit jaguars and to teleport away with them. He also “mentally ordered” them around.

Equipment:
El Dorado wears armor made entirely of gold. However, it does not cover much of his upper torso. I considered giving him armor but decided against it. 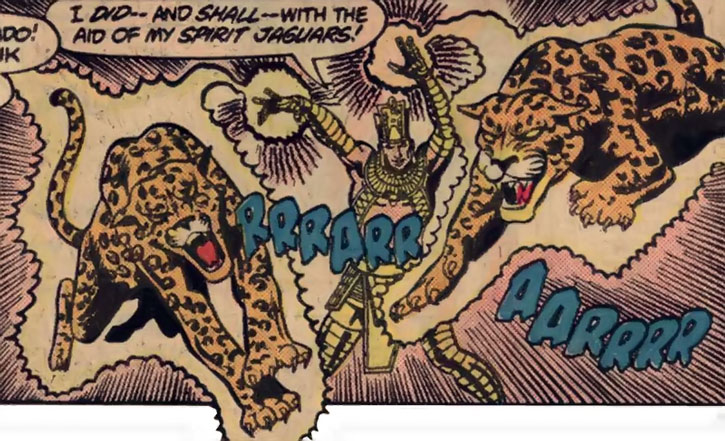 Drawbacks:
If the flame from his Flame Being is Neutralized, diminished by Flame Control, or absorbed by Energy Absorption (or whatever Rising Sun is doing to him), Moloch is defeated (knocked out?).

Bonuses and Limitations:
I assume his skeleton animation was done using Sorcery to mimic a variation of Animate Dead. I don’t consider it significant enough to bother detailing.

Bonuses and Limitations:
Without his talismans, Thaumar has only 5 APs of Sorcery. Each talisman adds 3 APs of Sorcery, and having the complete set ads 5 more APs, for a total maximum of 28.

Advantages:
Even though dead, he can be revived by a certain spell that uses the six talismans or talismans that look like the originals. Copies of the talismans must contain the same precious metals/minerals. If defeated (killed? knocked unconscious?), however, the effect of the spell is reversed.

Drawbacks:
His BODY is only 04 against magical attacks

Bonuses and Limitations:
She uses Sorcery to mimic Air Control for a blizzard (with special effects of snow), which Superman’s superbreath can’t affect presumably due to the blizzard being magical.

If you don’t like this idea, give her Air Control: 13 since his Superbreath is only 12. She also uses Sorcery to summon her friends the Oni (two or three of them) 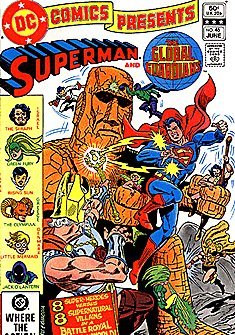 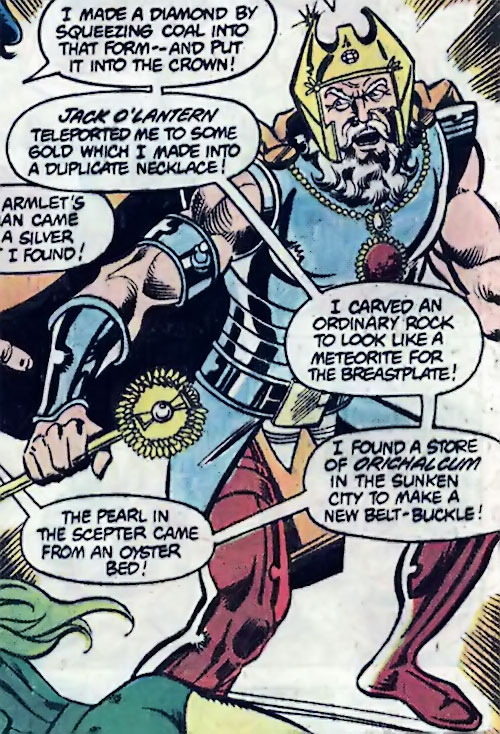 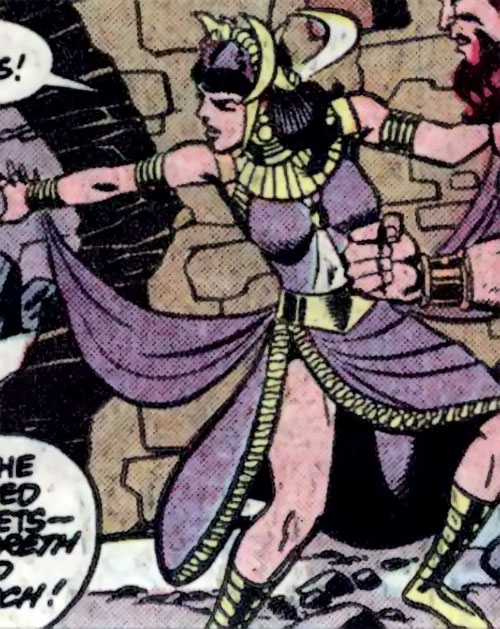 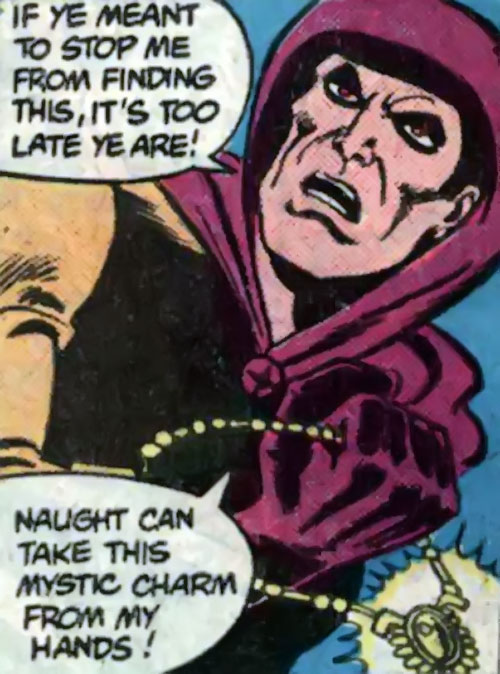 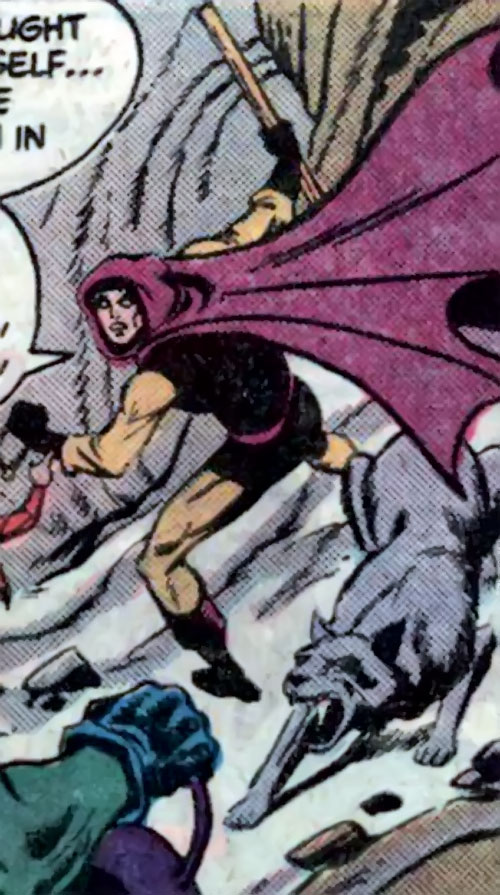 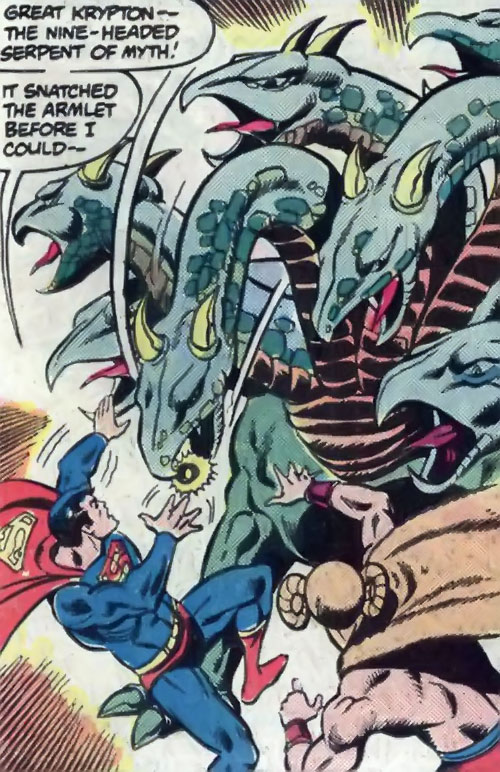 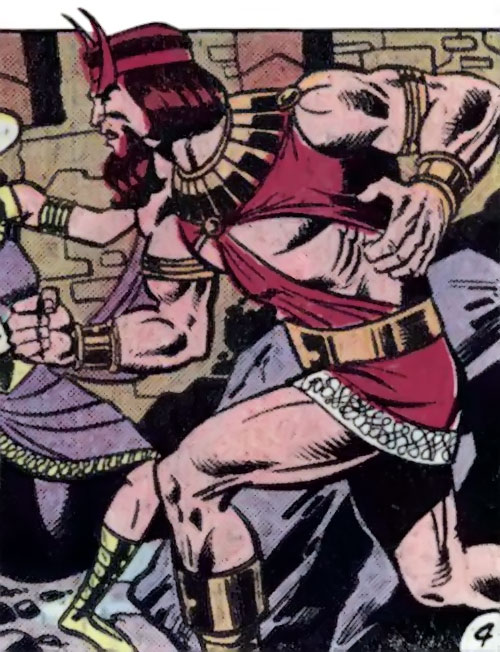 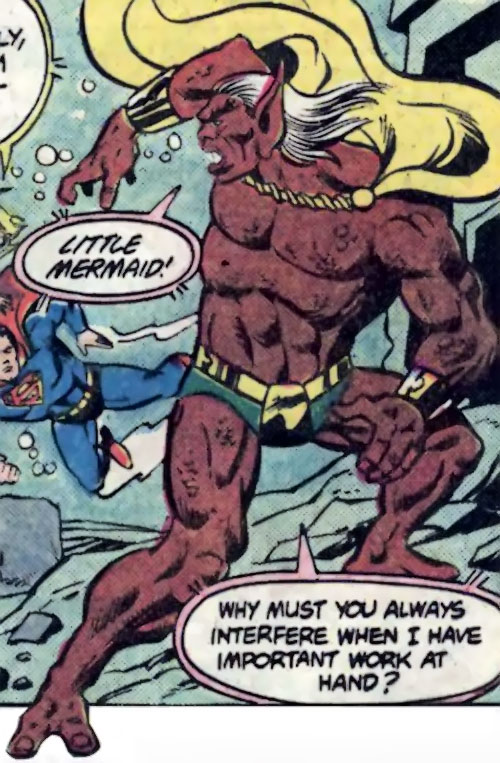 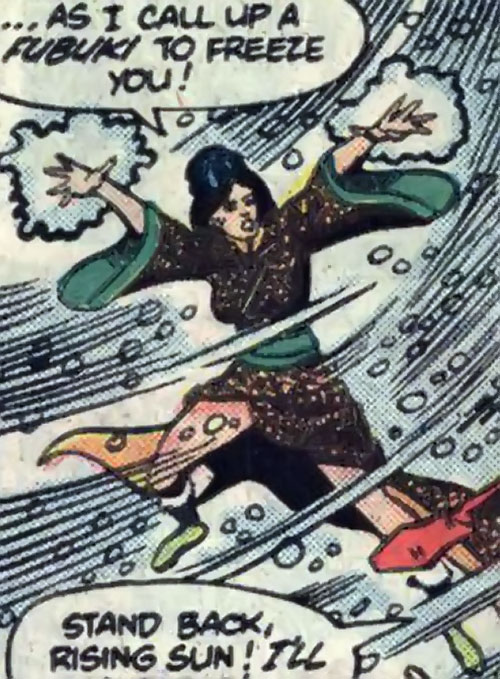 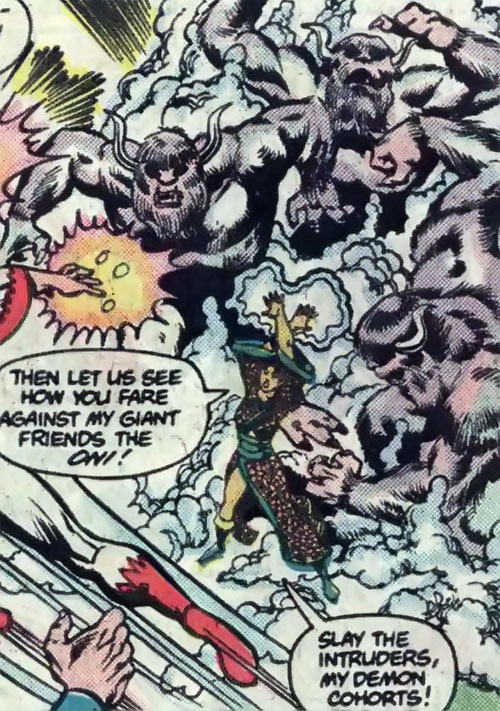