The luridly titled Death Reign of the Vampire King was a 1935 Spider novel. It is one of the notable ones, and features an enemy called the Bat.

I filled in a lot of blanks on the history. Most of the facts are out of the book, but the timing, and some of the “connective tissue” aren’t quite sufficient. I also completely fabricated eye and hair color, stealing the “Batman Family standard.”

The Bat is a genius in the fields of biology, chemistry, aeronautics, and anthropology, at a bare minimum. He’s also at least a fair hand at disguise.

His greatest successes are:

He also has a series of locations throughout the nation which can serve as a headquarters, in addition to the vast set of caverns where he breeds his bats.

Finally, large numbers of fearsome Jivaro Indians  have committed their lives to protecting and assisting the man.

Earl Westfall was one of the top jockeys in the United States. His horse nearly rivaled those such as the mighty Omaha .

Like many successful athletes, rather than stretch out his career past his peak, he chose to retire and raise horses. He returned to his home town of Hoot-Owl Center, not far from Hooligan Pass in the Rocky Mountains.

Also like many successful athletes, though, Westfall was occasionally harassed by gamblers and mobsters. His retirement had affected their bottom line. But eventually, the heat died down. Westfall took to vacationing around the world, sometimes able to take advantage of his celebrity status.

In a jaunt to South America, however, Westfall became stranded in the mountains. Desperate, he fashioned a makeshift glider, and made for a finger of smoke in the distance.

Safe for the time, Westfall began to live among these tribes, learning their language and culture. Finally, he realized the reason for his survival. Because of his glider, he had been mistaken as an agent for the Jivaros’ bat-god.

I shall become… a bats researcher

Further researching his situation, Westfall learned of the local vampire bat population. He learned first to disperse them, mimicking their signal for danger. And then to draw them through their signal for food. He also quickly realized the need for a way, once drawn, to prevent the creatures from interpreting him as food.

Like the Barbary pirates  almost a century before, he would threaten the world with death, should they not turn power over to him.

Or maybe a pirate

Making his way back to the city, Westfall chartered a plane back to Hoot-Owl Center. He brought with him a group of Jivaro assistants, and many cages of bats.

Upon reaching home, he began his preparations. The bats were set to breed in nearby caverns, full of hot springs that resembled the natural habitat of the flying animals.

He also began work on another glider, this one integral to a bat-like costume. It also had a tiny motor for thrust. To hide his identity, the costume was completed with face makeup that made him appear to be a bat-like creature, or a human that had mutilated himself to resemble a bat.

Finally, since his costume/glider would only be able to support fewer than a hundred pounds (and assuming this would be obvious to anyone with a scientific background who saw the thing), Earl Westfall began to slowly alter his “civilian” appearance. He eventually made himself appear to to weigh nearly twice his original weight.

Westfall then set to work building a group of assistants. Unlike the Jivaro, they knew about modern technology – and they could more readily blend in with modern American society.

Various men were recruited. But one Mr. Calvert in particular had all the skills necessary and had worked at a stablehand. Unfortunately, the man was interred in a sanitarium for drug addicts. To gain his trust and help, Westfall posed as a recovering addict. He infiltrated the hospital, bribing and springing Calvert. Then he nominally hired him as his stablehand.

Alas, this proved to be a bad idea. While Westfall was experimenting with poisons that would not kill the bats, Calvert—still on the path of recovery—stumbled into the lair of the bats, unprotected. He was killed instantly. With everything else in readiness, however, Westfall concluded that the time to strike had arrived.

He started small, going after the same mobsters and gamblers who had so tormented him when he had left racing. Dozens were killed. The police were unsure how seriously to take the threat, considering that it might be another vigilante purging the cities of crime.

The vigilante known as the Spider, on the other hand, was convinced otherwise. He began a campaign to stop the bat attacks. Ready for interference, Westfall recruited Calvert’s sister June, claiming that the Spider had killed the stablehand. June then had the Spider framed for the bat attacks, hampering his efforts.

Over the days that followed, the vampire bats killed well over a thousand people up and down the eastern seaboard, always a step ahead of the Spider. Then the attacks shifted inland to the amusement park at Michigan City, Illinois.

At Michigan City, things began to go badly for the Bat. The Spider not only arrived in time to save lives, but also managed to find clues as to the Bat’s identity and headquarters.

The final battle, appropriately, occurred near Hoot-Owl Center. The Spider bombed a convoy of the synthetic bat musk and bats, and scattered many of the Jivaro. He then pressed the attack with a glider of his own. The vigilante fought the Bat in his own domain, outside the very caverns he worked.

While he fought well, the Spider managed to get a good shot in. It collapsed the glider, sending Westfall plummeting to his death.

The Bat appears as a short man with wide, leathery wings stretching from his shoulders, which he languidly waves when not flying. His face appears very much like that of a vampire bat—his nose apparently sliced off, and the skin from elsewhere across his face drawn to the wound. Long, pointed ears also adorn his head.

To add to the illusion, the Bat speaks in a squeaking, rasping voice. It is almost indistinguishable from the noises he uses to summon and disperse his bats.

Westfall, by contrast, is a decent-looking, well-dressed man, though short and (apparently) dangerously overweight. As Westfall, he speaks well and clearly.

Westfall keeps to himself as much as possible, even when in the spotlight of celebrity.

The Bat, however, is a very different story, bordering almost on the stereotypical “evil genius.” Deathtraps abound (most of which involve feeding his bats), and are frequently accompanied by gloating over his enemies.

In battle, though, he is far more likely to let others (the bats, the Jivaro, and his local confederates) fight for him, while he watches from far above, in his glider. He will, however, make ample use of the glider’s spine-mounted rifle, should he see any need.

The Bat does, however, appear to like to keep to his schedule. This remains true even when security surrounding those plans has been compromised.

“You are wondering why you are alive. It is not our habit to kill such prisoners as come our way—that is, not at once. You were shot with a narcotic instead of poisoned darts. You see, our bats must have food.”

“Unless you return at once the way you came, you will forfeit the lives of three friends and the woman you love. Furthermore, I shall shoot you down, as I am in a position to do at this moment. Consider, Spider, the lives of four people against a strategic retreat. Which do you choose ?”

Westfall’s activities in the DCU’s Golden Age  were mostly based out of Gotham City. Rather than the Spider, it is likely that the Crimson Avenger put an end to the Bat’s activities.

Decades later, when Bruce Wayne appeared on the scene in Gotham as Batman, the police hunted the new hero, fearing that there might be a link between the two.

And, of course, Batman’s appearance also caused one of Westfall’s descendants to become unhinged and take on the identity and methods of The Bat, himself, challenging Batman for the name.

Our contributor Jay likes the idea of Westfall using Wayne Manor, and what will one day be the Batcave, as the Gotham City staging ground. The Bat would capture young Thomas Wayne and Alfred when they’re snooping in the area.

The caves, by necessity of the story, need to have been remodeled before the Civil War to serve as part of the Underground Railroad, thus making them (potentially) warm enough for the tropical bats to survive in the Gotham climate.

I don’t particularly care for the idea, but it does seem rather DC-ish, and at least deserves mention.

See also the DCU History section in my writeup for Marie “Le Tocsin” LaSalle, for a potential character using who might use Westfall’s gadgets.

Bonuses and Limitations:
Animal Summoning is actually a Skill. The Bat has practiced the call of his charges, and can duplicate it at will.

Note:
The Weapons Stash Schtick is used exclusively to set traps behind him. It otherwise works as described on the Schtick List.

These bats have been starved for some time, so that they will attack even humans. Their teeth have also been coated with a poison which has no effect on them, but is instantly deadly to humans.

They are typically deployed in lots of hundreds, either from the air, or inside buildings with prepared traps.

These squat, dark-skinned men were found in South America by Westfall. They believed he was their bat-god, due to his ability to fly. They follow his orders without question, and will not hesitate to kill anyone who stands in the way of those orders.

They are proficient with their blowguns and knives. Typically wearing red and gold tunics (ceremonial garb), they are entirely capable of wearing localized clothing when it is required or convenient. Similarly, some will have additional training for particular missions.

The Bat tends to have anywhere from four to 12 Jivaro on the ground when he attacks, to ensure things run smoothly. As many as 30 might be found in the Bat’s headquarters.

The Jivaros warriors are truly fearsome fighters. Each could pose a serious threat to the Spider.

Source of Character: Death Reign of the Vampire King (Spider). 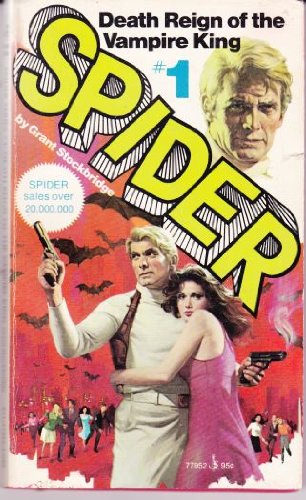 Death Reign of the Vampire King