Centaur Publications was a blink-and-you’ll-miss-’em Golden age  comics publisher. They existed from 1938 to 1942.

This here old article was part of a small series on obscure Golden Age characters. These were based on good research into old comic books getting published online. Much of this material has since moved to books. Presumably, it’s no longer so niche as to present little interest for publishers.

Early in 1939 Centaur Publications began a new series titled “The Eye Sees” in their comic book Keen Detective Funnies. Nicely drawn (and written ?) by Frank Thomas, it scrutinized one of the strangest heroes to appear in comics. It certainly was an odd cover feature – real eye candy.

The hero was a disembodied super-powered organ complete with lashes. It spoke and showed no mercy to crime—it was a real eyesore. The Eye would spot fleeing criminals and pursue and destroy them with powerful discharges. And I don’t mean that early morning eyelid crust.

Keen Detective Funnies began with issue No.8 in July 1938. After an inauspicious beginning as an anthology comic typical of its day, Keen Detective became the home of the Masked Marvel. I’ve noticed that people use “Masked Marvel” to describe generic heroes and wrestlers.

The Eye Sees finally appeared in vol. 2 No.2 in 1939. Centaur, like Novelty press, updated the volume number of its publications annually renumbering starting with issue No.1 each year.

Thereafter the ocular feature appeared in every issue of Keen Detective, with the two exceptions of vol. 2 Nos.3 and 5, until the title folded in September of 1940 with its 24th issue.

Centaur also ogled The Eye for the short-lived Detective Eye comic book (No.1 November and No.2 December 1940). I have not perused copies of Detective Eye comics for myself, but my usually reliable sources (who have) tell me that they contain reprint material from Keen Detective.

These strange Eye stories often began with an introductory speech such as:


“THE EYE ! That haunting spectre of man’s inner conscience ! Whose presence strikes terror into the hearts of evil men and smashes their deeds !! Time or distance mean nothing to The Eye ! He appears wherever men do wrong whether it be in the Sandy Wastes of the Sahara, or the crowded streets of an American metropolis !!!”

The visual character had a pretty set modus operandi. The Eye would appear before people as a weird apparition and instruct them to do its bidding. It was a chatty orb, and liked to give speeches about how crime doesn’t pay and no one escapes justice and how it needs a Visine bottle the size of a Volkswagon Beetle.

To enforce its edicts The Eye could emit a disintegrating ray from his iris (he was no flower child). The Eye could also levitate objects and often hypnotized its victims bending them to its will.

There was not much of a detective style “who-done-it” approach to the stories—just pure eye muscle. Usually the crime and perpetrator was revealed to the readers by page one.

The fun was in “seeing” how The Eye would deal with the evil. Just like most of Centaur’s other features, there was absolutely no character development in The Eye Sees stories, only action.

“Fools ! To think bullets could harm The Eye !”

He could easily fit in DC’s overcrowded Golden Age. There might even be a connection between The Eye and the Spectre – or he could be the Emerald Eye’s opposite number. 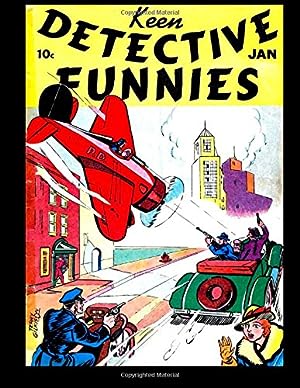