I recently watched the animated film Monsters vs. Aliens and thought it would be cool to writeup the original monsters.

The Fly was a 1958 horror movie, which inspired a number of (far gorier) sequels and remakes over the years. It’s certainly one of the 1950s “atomic horror” classics, and was considered quite scary back in those days.

S P O I L E R ALERT! if you plan on watching this one read no further until you’ve seen it. I think it’s worth watching.

Andre works as a researcher for government agencies, like the aerospace department. While working for these agencies, he has access to buy research equipment and materials through their purchasing department. Andre has virtually free rein over what to do with this money.

After the experiment Andre kept his usual reasoning ability and was able to stay composed and clear minded about the whole thing. With a fly’s head, Andre was unable to speak and so communicated with the type-written word only. It is conceivable that if the fly were caught he could’ve reversed the accident.

The movie begins with a mystery. A night watchman, Gaston, at DeLambre Freres Electronics Montreal LTD. hears the sound of an intruder operating a brake press. He hears two counts of press operation. As he comes on the scene a woman flees.

The press is covered in blood. A man’s body is sticking out of it! The body is later identified as the fleeing woman’s husband, Andre Delambre.

She calls her brother-in-law, Francois, and he comes by with police detectives. When asked, the woman, Helene, confesses to killing her husband with the press. Yet she won’t tell the detectives why she did it. 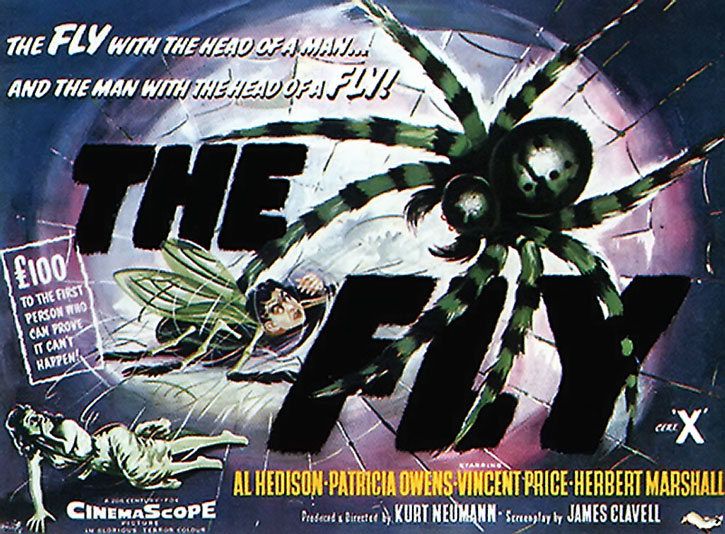 Helene explains that she knows how to operate the press. This was significant since the police and the brother-in-law were skeptical that she could have worked it alone. She then states that Andre placed his head and arm under the press himself.

Francois was still not convinced she had done the deed and investigated his brother’s Laboratory but came up empty handed.

Later that evening, Francois talks with Helene’s son over dinner. Philippe explains that his mother is after a strange fly. When questioned, the boy explains that the fly she is looking for has a white face instead of the normal black and one of its legs is also white.

With this new information Francois lies to Helene, saying he had caught the fly. He convinces Helene to tell the whole story of what has happened and why she killed Andre.

We learn through her tale that Andre was working on a new invention, a matter teleporter device — the disintegrator-integrator. But it wasn’t working just right. Thus, Andre disappeared into his basement laboratory to work out the problems.

A few weeks later he emerges and is ecstatic that all seems well now. After treating himself and Helene to the opera and champagne. Then Andre returns to the basement to show off his new invention.

Helene is very happy for Andre but she doesn’t seem to understand the full potential of such an astounding device. After teleporting a guinea pig from one box to another Andre explains to Helene he can’t call it a success until the creature survives for one month. Helene asks to look after it. 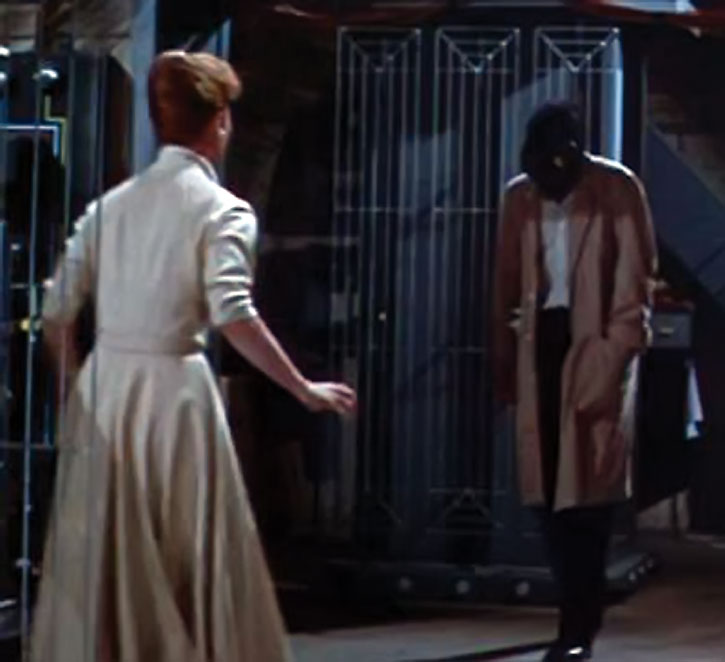 Helene invites Andre’s brother, Francois, over to see the invention. However, after dinner Andre disappears into his lab. He posts a note on the door that he doesn’t want to be disturbed. Soon afterward, Philipe her son comes running in to show off a funny fly he just caught. It had a funny white head and a white leg.

His mother was not interested and scolded him for tracking dirt into the house.

Later that night, the housekeeper informed Helene that Andre didn’t eat his dinner. She goes to investigate. Andre slips a typed note out of his lab under the door. The note reads:
“Helene, I’ve had some trouble. I’m counting on you not to lose your nerve. Only you can help me. I’ve had a serious accident; I’m not in danger at the moment. Although, it’s a matter of life or death.”

Helene began doing as Andre asked through his notes but it is soon revealed that he has changed. Helene is allowed into the lab to search for the fly. But after his left arm is revealed, black and insect like, she is ordered out of his lab and flees in tears.

Helene returns in the morning with a breakfast composed with milk and rum for him to drink. Andre has come to the conclusion that if the fly cannot be found; he’ll destroy his research and himself.

He explains to Helene that he transported himself and it was successful. But on the second attempt a fly got caught in the chamber as well. This resulted in a mixture of atoms. Now he had switched his head and arm with that of the fly. 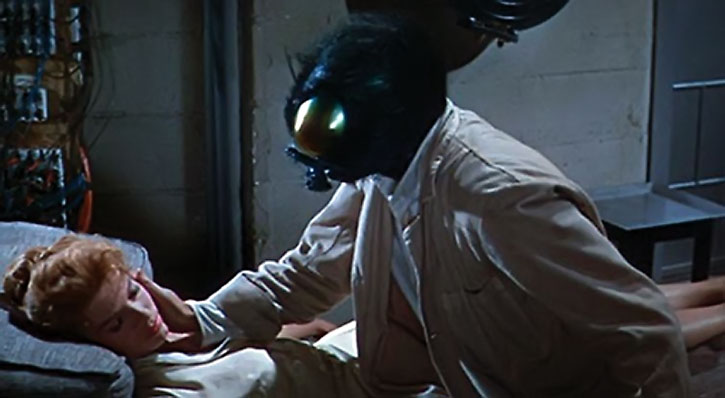 Andre’s will is fading as the fly’s instincts are fighting to take over his brain. Eventually, while Andre can still think rationally, he smashes his equipment and research notes. Then he leads Helene to the hydraulic press, placing his head under the press.

Helene lowers the press crushing his head killing Andre. Helene then puts his left arm under the press and activates the press a second time.

After hearing this confession, the police deems her insane and guilty of murder. As they are hauling her away, Philipe tells Francois he’s seen the white headed fly trapped in a web in the garden. Francois and the inspector go to see for themselves.

In a disturbing array of imagery, both men see the fly, trapped in the web with Andre’s head and arm about to be devoured by a spider and screaming in terror “help me! Help me!”

The inspector smashes the fly and spider with a rock. After seeing this they knew Helene was not insane. They backpedaled on the facts such that Andre committed suicide instead.

Andre is always clean cut and smartly dressed with suit and tie. When working in his lab, he will wear a lab coat but all other protective gear he will only don as needed.

As the fly, Andre put a black cloth over his head and hid his left arm inside his lab coat pocket. When revealed his left arm was black and insect-like. His head was that of a fly with large bulbous green/copper eyes.

Andre is a very serious man. He is quite confident about his abilities as a scientist. He is even amazed by his own inventions. When working in his lab he will post on his door a note so he is not disturbed.

When it comes to science, Andre is ravenous. He will chase down a problem no matter how long it takes, forsaking his friends and family to pursue his ambition. 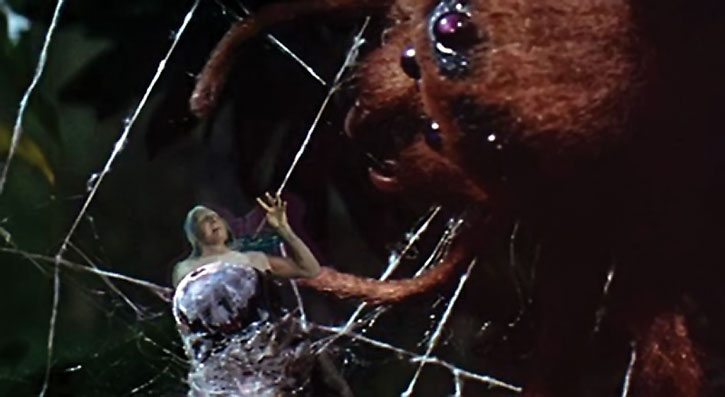 Andre has tons of money at his disposal and a very forgiving wife. She has stated at one point that she only saw him twice in the last two weeks.

When it comes to his relationship with Helene, Andre is overbearing giving even her threats a smile as if she is joking, even on the occasion he gives into them. Andre does love his wife and family but is a definite control-freak.

After the experiment he is very conflicted, fighting against the urges of the fly. Andre wins each match of Willpower, although he considers the possibility that he could lose control. He is determined to destroy himself if he cannot be cured.

The fly could be either a hero of villain. As a hero he would be continually fighting against the instincts of the fly and would likely continue to look for a way to reverse his condition. As a villain he would bring his scientific ability to bear against heroes and allow the fly’s killer instinct to come to the front when there is combat.

Another option would be to go the Monsters vs. Aliens route and bring together a group of monsters to work together as a team.

Helene: “Philipe’s acting like a juvenile delinquent, Dandallo’s disappeared ; I’ve even got to go to professor Orgazie’s alone.”
François: “Well, you know how he is Helene ; it’s just until he solves his problem, whatever it is. Just be patient.”
Helene: “How you men stick together.”

Inspector: (Speaking about Andre) “Did your brother ever experiment with animals ?”
François’: “Never.”
Inspector: “…or insects ?”
François’: “Insects ?” (Lightly laughing) “That would be funny if…” (then serious) “… no. Helene and Andre believed in the sacredness of life ; they wouldn’t harm anything, not even a fly.”

Helene: “What are you doing ?”
Andre: “Oh, just looking at the sky. Looking at God perhaps.”
Helene: “You’re a strange man Andre. Precise and practical and yet so…I don’t quite know how to put it.”
Andre: “So aware of the infinite. The more I know the more sure I am I know so little.”

(After Helene suggests showing his invention to his fellow scientists.)
“No… no, there’s no hurry. I… uh… I don’t even know how or why parts of it work yet. It’s too important. It’s too impossible.”

Bonuses and Limitations:
Skin Armor represents the exoskeleton of the fly and only protects his left arm and head. The Fly had one long claw on his left hand.

Drawbacks:
Married (0 points), Serious Irrational Attraction to Science, Serious Physical Restriction (Mute), Strange Appearance, Serious Psychological Instability (One day after the experiment, Andre began to communicate that his brain was thinking odd things and that he had trouble focusing. He was worried for his wife’s safety and instructed her ; she could not be near him. He would have to use his right hand to fight against his left hand, as it often acted of its own accord.)

As a man Andre had Str: 02 Bod: 02, Motivation: Thrill of Adventure. Andre would also have no powers. Remove the Drawbacks – SPR (Mute), Strange Appearance, and Serious Psychological Instability.

Exactly as a normal fly except that it gained Andre’s human head, left arm and, after a few days, limited speech. Enough to scream for help.

Wealth has two ratings. The first is his own income the second is provided by his employer and is intended for buying the necessary components for his experiments and is separate from his wages.

Source of Character: The 1958 movie The Fly ; Character played by David Hedison (credited as Al Hedison). 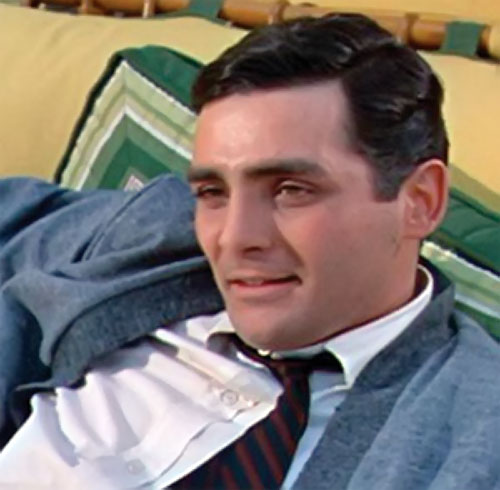 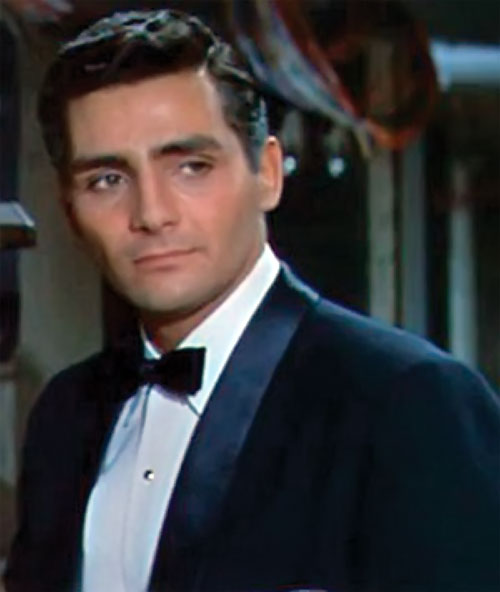 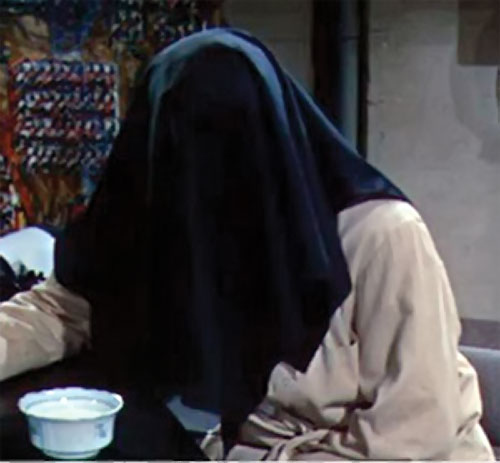 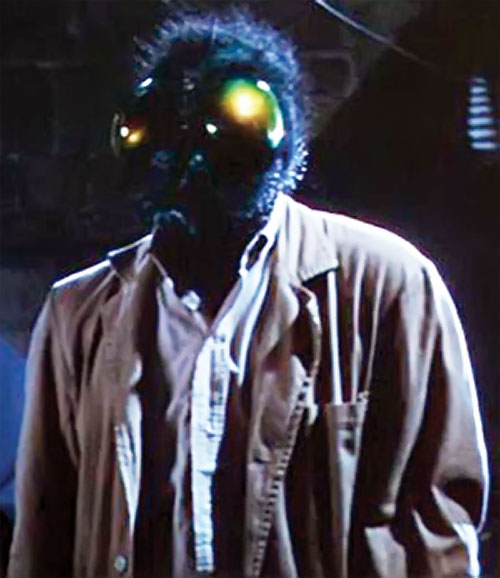 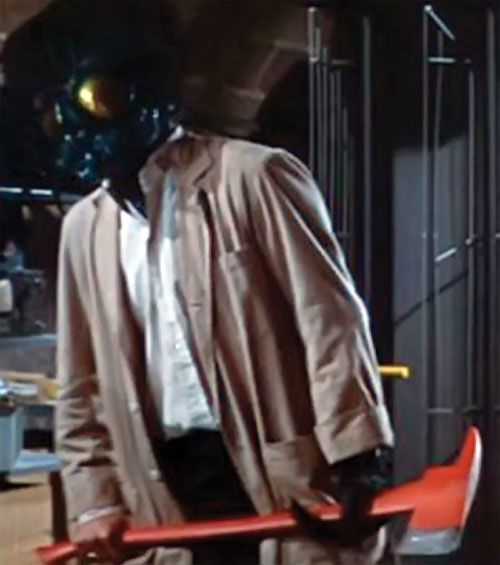 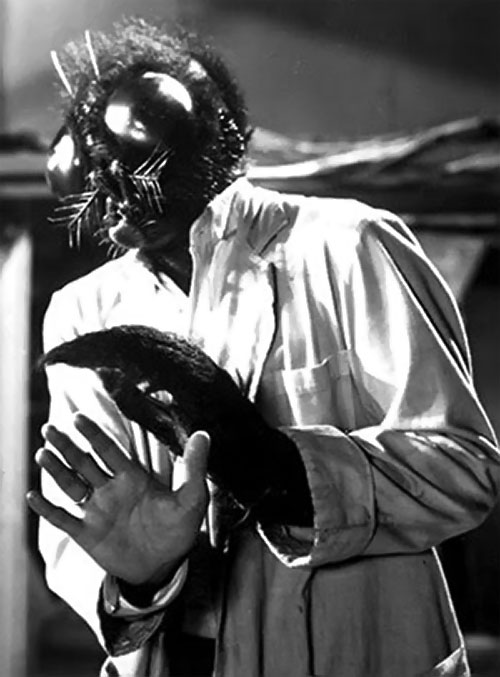