The Grinch really is a bizarre creature. He can twist his head completely around 360 degrees with no need to turn it back again. He can slither along the floor like a snake, even using his stomach muscles to climb a tree. 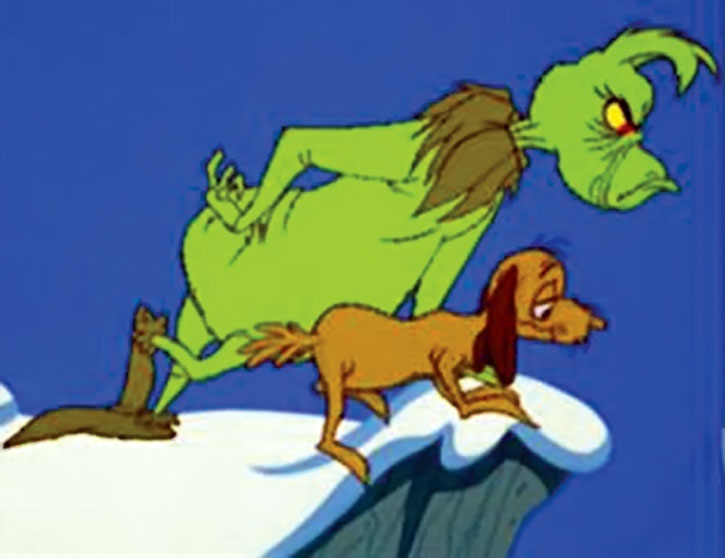 The Grinch can motivate with a whip better than the best. He got Max, his dog, after an all night moving job to pull an unbelievably over packed sleigh… how far?… ten thousand feet, to the top of Mount Crumpet! He and his dog live at that ten thousand feet, by the way, and have completely acclimated to the lower oxygen levels.

He is also extremely stealthy. Robbing every house in town in one night is quite a feat. He even stole candy-canes right out of the hands of children while they sleep.

The story of the Grinch gives us no hint to his past at all. From his appearance, he very well could have been a Who at some point.

The Grinch is a grumpy old hermit. On Christmas Eve he hatches a plan to steal Christmas from the Whos of Whoville. Bitter and hateful, the Grinch is irritated at the thought of the nearby village having a happy time celebrating Christmas.

So disguised as Santa Claus, with his dog made to look like a reindeer, he raids the village to steal all their Christmas things. He hopes that the Whos would be devastated by the deed. 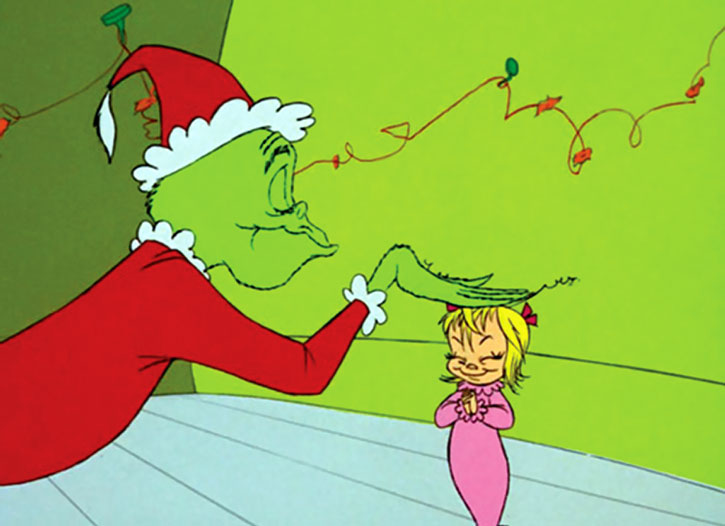 Instead, he learns the true meaning of Christmas and with it, a radical change deep within him. Switching completely from Mercenary to Upholding the Good.

The Grinch has a tall stand of hair in the middle of his head. His face is seemingly frozen with a deep angry frown.

The Grinch is completely covered in green fur. When we first see him he’s got his hands in what appear to be pockets as if he’s wearing a coat. But there is no seam so; I assume he has small pouches similar to a kangaroo’s.

He also wears a pair of brown shoes that are too tight.

“Sour, rotten, and mean!” (in my best Boris Karloff voice).

The Grinch has grown jaded in his old age. His anti-social behavior has caused him to isolate himself at the top of a mountain. However, notice he hasn’t gone too far away from the Who’s. He’s put himself in a position so that he could look down on Whoville. This way he can still complain about them.

“You’re a mean one, Mr. Grinch. You really are a heel. You’re as cuddly as a cactus you’re as charming as an eel, Mr. Grinch.”

“I MUST find some way to stop Christmas from coming !”

“What a great grinchy trick ! With this coat and this hat, I look just like Saint Nick ! All I need is a reindeer…”

“Ho, ho to the Who’s”, he was Grinchily humming, “They’re finding out now that no Christmas is coming. They’re just waking up I know just what they’ll do. Their mouths will hang open a minute or two, then the Whos down in Whoville will cry Boo-Hoo. That’s a noise”, said the Grinch “that I simply must hear.”

Drawbacks:
Age (Old), Minor Irrational Hatred of Christmas and those who celebrate it (bought off when he switched Motivations).

So, he took his dog, Max

Max is a very intelligent dog. He certainly understands the English language.

Drawbacks:
Other than being the Grinch’s dog? None. 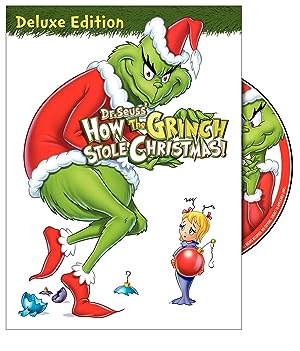 How the Grinch Stole XMas (1966 version) 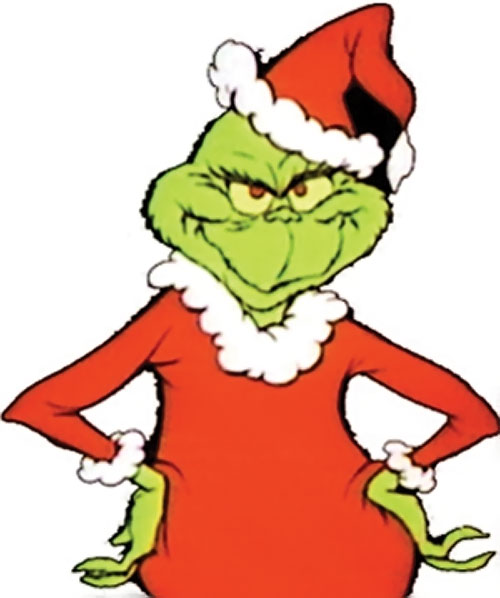 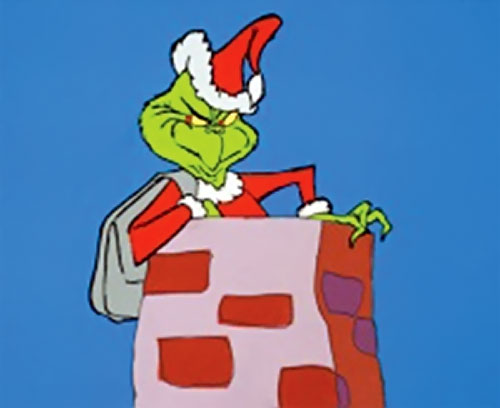