The Order appeared in 2006, following on the divisive Civil War event.

It focused on a team with more realistic, fallible characters.

But due to reasons, the series’ plug was pulled after but ten issues.

Which leaves those interested with the raw material for a C-list do-gooder team. These would be suitable as Player Characters , or as a rival team, as enemies for a none-too-legal PC team, etc..

Modus Operandi:
React to threats within the California region which are too much for the regular authorities to cope with.

Membership requirements:
Formerly used a rigorous screening process, and the applicants had to have a degree of celebrity to begin with.

The Order, originally called the Champions, was set up as an experimental adjunct to the 50 State Initiative by Tony Stark.

Choosing from volunteers possessing excellence in some field, and the right mindset, the selected underwent a rigorous training process. They had powers designed specifically for them, which they’d have for one year. These powers were based on the soma enhancement technology.

The team was established in LA. One of their initial missions (the team at this time comprising of Anthem, Hera, Calamity, Heavy, Avona, Corona, Maul and Pierce) was to stop the unspeaking menace they dubbed the Infernal Man. They beat him, Corona absorbing his heat long enough to knock him out. 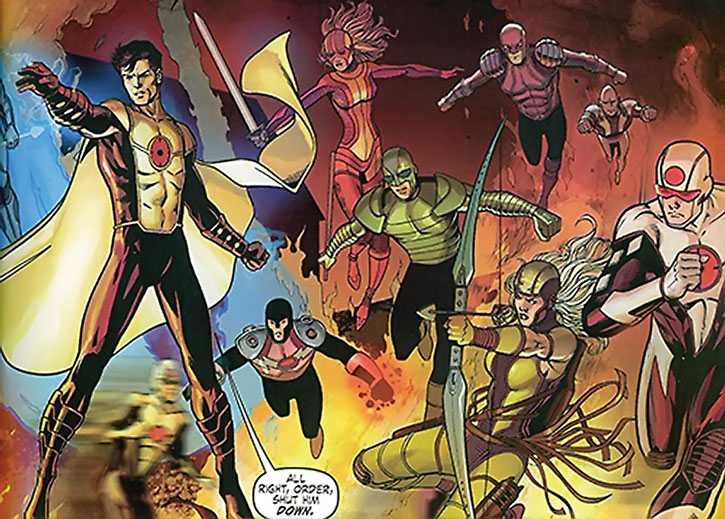 The Infernal Man was quickly taken into custody by General Softly, the M.A.N. from S.H.A.D.O.W..

Avona, Corona, Maul and Pierce decided to celebrate with a night on the town. While their powers shut off when drunk, the action was a breach of morals clause in their contracts. So they were fired and their powers removed.

The public training exercise to show off the new member’s powers to the press was interrupted. A group of Cold War Russian super-villains were detected flying towards California. The Order intercepted them. 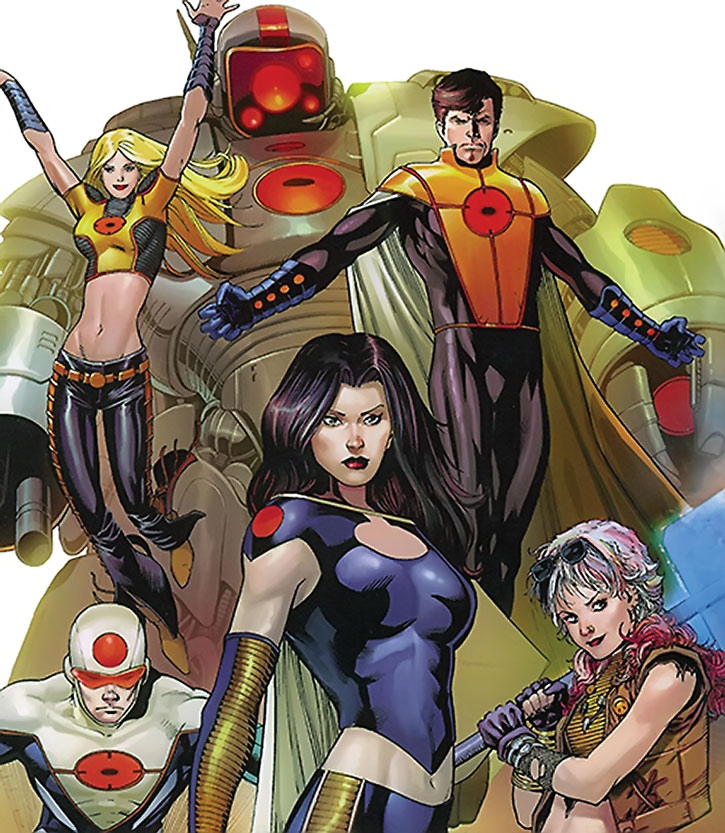 The invaders were tracked back to a Pacific island which had served as a Soviet listening post. The Order worked out the Russians had been held in suspended animation as a doomsday weapon, which had been triggered when the Infernal Man’s heat signature had been detected.

One of them contained a nuclear bomb, which exploded. But Aralune harmlessly absorb the blast after changing into a sort of jellyfish.

LA was subject to outbreaks of Zobo’s. These were dead hobos who’d been converted into robotic zombies. They sprang up in increasing numbers further and further from the Order’s base. These were soon determined to be a test the Order’s capabilities.

When former member, Pierce, was found dead, the Order investigated, checking on the other former members. They found Corona being tortured by the super-powered Black Dahlias, former friends of Mulholland, who killed Corona and fled. 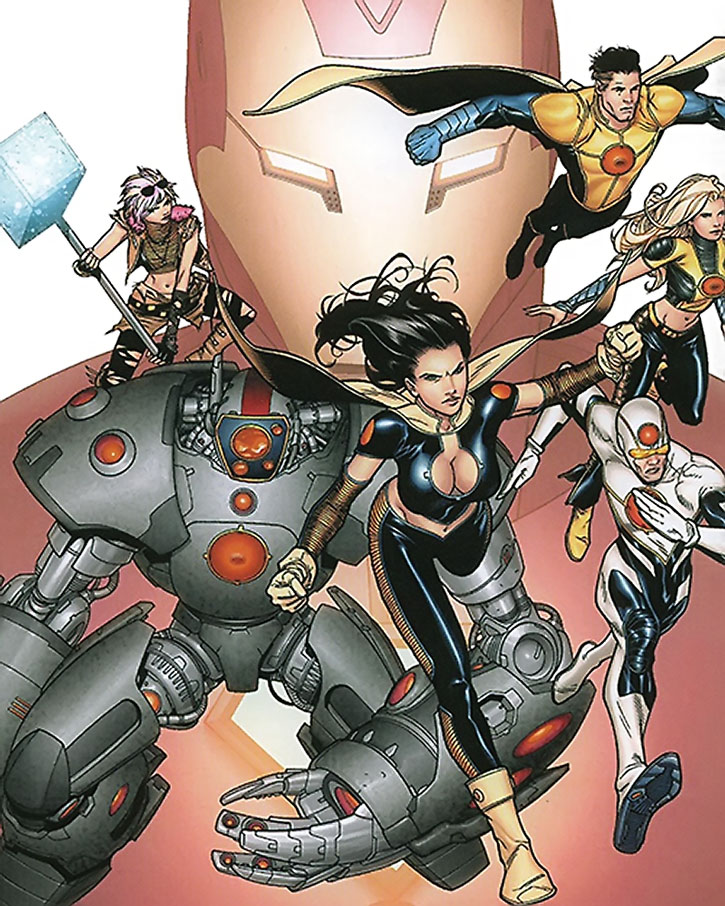 While investigating mutated animals out in the desert, Aralune (Becca) and Supernaut (Milo) were ambushed by more of them. They realised that they were on a S.H.A.D.O.W. testing ground. The Supernaut armour was broken, and Aralune lost control of her form. But Milo was able to finish off the creature, and drag Becca to a cave to hide before General Softly could find them.

Softly’s hunters eventually found them, forcing Milo to try something desperate. Becca had regained just enough control over her body to form it into a shell over Milo. She used the control port for his Supernaut armour to give him control over her.

This hybrid fought off S.H.A.D.O.W. forces until the rest of the Order finally located them, and took down Softly. They thus learned that he was one of a number of androids, the real Softly having died decades before.

Mulholland fell out with Anthem, and stormed away from the team. She was then kidnapped by the Black Dahlias, on behalf of Ezekiel Stane. Stane was behind all the troubles Tony Stark’s pet project had endured as a way to hurt Stark.

The rest of the team tracked her to Stane’s base. They battled his forces (the Black Dahlias, Infernal Man, Maul, and General Softly). But he trapped them and used an electromagnetic pulse to remove their powers, then escaped with Mulholland. 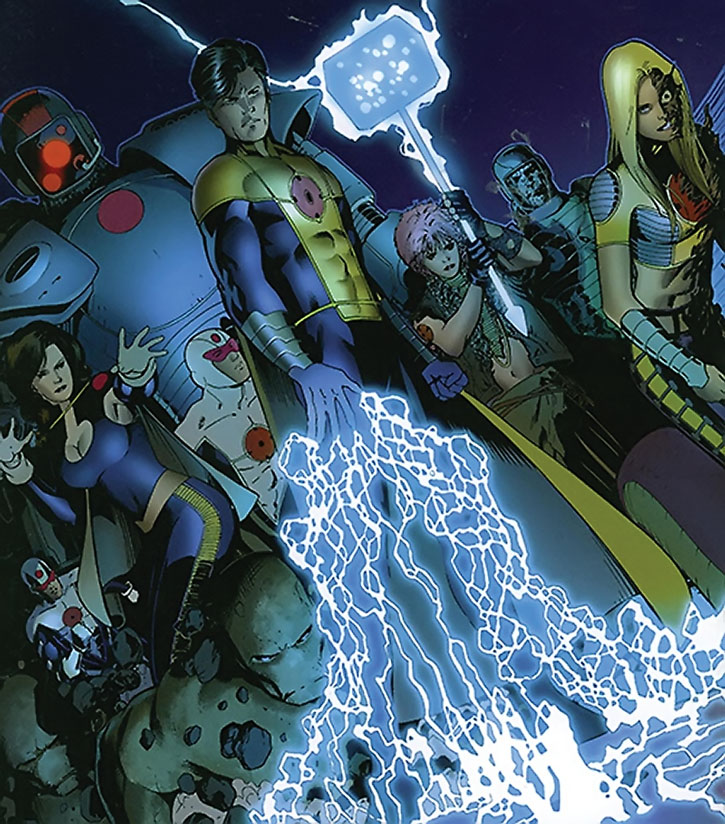 Without his powers, Heavy was unable to breathe the fluid in his armour. He died before he could be freed.

Having reactivated and amplified Mulholland’s mutant powers, Stane turned her into a weapon. He used her to order LA to kill itself and causing riots across the city. The remaining members of the Order, still de-powered after being rescued by Iron Man, escaped from custody to go after Mulholland.

They found her atop one of the Watts Towers. Anthem tried talking her into controlling her powers. Unable to do so, he ended her suffering.

No traces were found of Stane’s existence. But Stark was happy with the team’s performance and restored their powers on a permanent basis.

The team was then absorbed into the Initiative properly, rather than being a side-project.

The SOMA process was developed by Tony Stark. It gives subjects artificial super-powers, designed in consultation with the subjects. The process isn’t quick. Furthermore, the subject usually has to undergo a training and treatment regime to assure they’re in condition beforehand.

The final treatment delivers a viral genomech payload. It artificially replicates a biological superhuman condition in the subjects, hacking their bodies and upgrading them.

There are a few aspects of it which remain constant no matter the power set, such as:

While the only evidence for their flying speed is an estimate that they could fly from the Bradbury Building to the Salton Sea (which I’ve roughly estimated at 250 miles using internet maps) in half an hour, their Flight should probably be 9 APs.

But it doesn’t seem that fast elsewhere, or give them that level of airborne dodging. So I’ve set it at the level which works better for what’s seen, and assumed the estimate was hopeful. 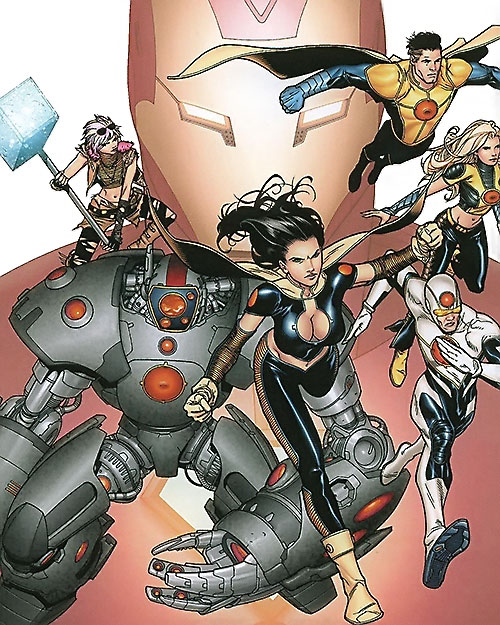 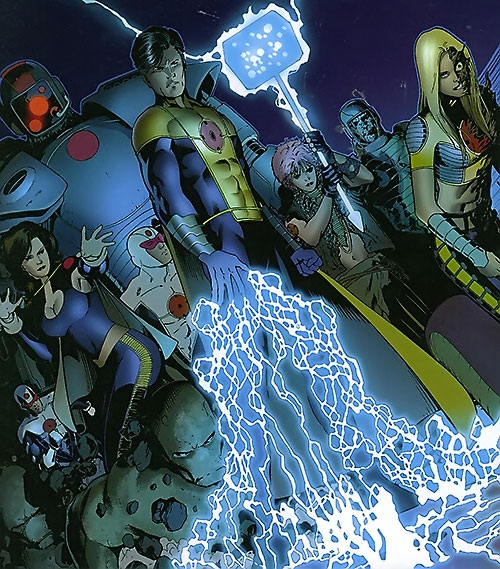