Ray can fly at the speed of light. He can generate light-based energy FX including extreme heat and cold, as well as infra-red capabilities (which he hasn’t discovered yet).

As an energy being Ray is about as strong as he wants to be, if his energy can move whatever mass its pushing against. He can “assist” his punches and slam big hairy guys around. In his energy state, matter can pass harmlessly through him.

About his autonomy : It really depends on so many factors. I suppose a fully-charged Ray in a dark room with no air can remain shifted to his energy state for about 12 hours. Now, why he couldn’t burst out of the box is another question. But if he remains in there… yeah, about 12 hours on a full charge. But Ray rarely has a full charge.

What light can he absorb ? Well, fluorescents suck. Incandescents are much yummier for him. But he can do both. Artificial light is not as pure, so he’s weaker.

Ray Terrill is the younger son of the Golden Age  Ray (“Happy” Terrill). For years he lived in darkness, after it was discovered he couldn’t control his light absorption powers. The doctors turned on the lights in the room, and Ray lit up like a firecracker.

Because of this, he was raised by his uncle and two nuns without light, as the “night boy”. The child supposedly had a “rare skin disease” making sunlight fatal.

Because of this and numerous other lies and deceptions his father has pulled on him and others over the years, Ray doesn’t have a very good rapport with Happy Terrill at all. In fact he doesn’t consider him to be his real father, that being his dead uncle.

Ray is angst ridden over:

He used to be innocent, trusting, and uncertain. Then he quickly became jaded, and finally now is extremely sarcastic. However, he is much better at dealing with his problems now, and has a healthy relationship with a woman Hank dumped, named Jazz.

He occasionally is taken in, and kicks himself for it, most notably almost falling into Neron’s clutches. He usually feels like a fish out of water in most situations, coming from an isolated background, but he is used to being considered a freak (re: Night boy.)

By Byron “This is your Old-Timer on Miraclo” Molix.

Helper(s): JD, Christopher Priest (JD was working on a version of the Ray and consulted the expert himself), Kansas Jim, Dave “Ray does use Happy’s stats, it’s just that Happy uses something else” Oakes, David Adams. 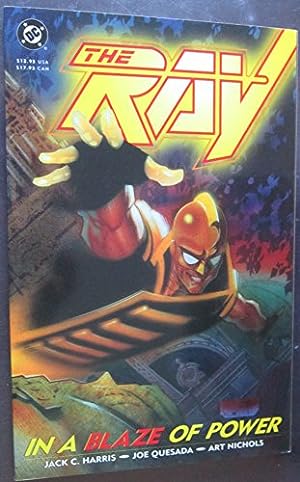 The Ray: In a Blaze of Power TPB