The Shadow is a seminal, very important character from the pulps . These are our older notes – nowadays the profile for the Shadow (Matt Wagner take) may work better.

Still, these old notes use a different angle (more based on the novels) and thus offer a useful complementary reading.

Foremost among the ancient mysteries taught to Allard is the art of “clouding men’s minds” – the ability to hypnotize someone instantly so that he can move about as though invisible. He also has mastered every language on Earth.

Thanks to the muscle control he learned in the Orient, he can survive for hours by breathing only whatever air is in his armpit. He also has the ability to alter his facial features through sheer force of mind and muscles or slip his body through a space a narrow as the bars of a prison cell. As a ventriloquist, he is unmatched, he threw his voice all the way up a mountain !

His reflexes are likewise extraordinary, Allard being able to drop to the floor faster than a bullet fired from a nearby gun can strike. When he decided to fight crime he devised a “weird, chilling laugh” which wafting from beneath his “keen, burning eyes,” unnerves ne‘er-do-wells at every turn.

The Shadow had a veritable army of assistants. To these he often appears as George Clarendon, an identity that was far less intimidating as the lofty Cranston. Here are some notable names.

His top agent, an ex-gambler who down on his luck, was about to commit suicide by jumping off of Brooklyn bridge. Just as he started to leap off into the cold dark water, two strong arms shot out of the dark and lifted Harry back onto the bridge. Harry had just been spared from death by the Shadow.

Once safely in the back of a taxi that seemed to appear out of nowhere Harry heard an eerie voice from the dark seat beside him. ”I have saved your life Harry Vincent, it now belongs to me.” said the voice. ”How did you know my name ?” said Harry. The voice replied “The Shadow Knows”. From that night on he became his most trusted agent.

Moe” Shrevvy” Shrevinitz, just your average New York Cabby. That is unless the red gem in the ring he wears starts glowing, at which time he becomes driver and agent for the Shadow. Shrevvy is activated when the Rolls would be to conspicuous.

Dr. Roy Tam walked out of the operating room in his China town clinic only to face three armed gangsters from a local tong. They were sent to kill the good Doctor and destroy his clinic, as an example to others who would not pay protection. But just as it seemed Dr. Tam would be shot down, an eerie, mirthless, laughter echoed through the clinic.

When the shooting stopped, three of the hoods were dead and one, badly wounded, and scared out of his wits was allowed to take a message to his bosses. Since that day the tong has wisely, left the clinic, and Dr. Tam, alone.
Dr. Tam is an agent of the Shadow, and his personal physician. Note: Dr. Tam was not portrayed as the Shadow’s personal physician in the original books, but was so in the Dark Horse Comic’s version

The “dispatcher” who relays information from the Shadow to personal in the field.

Who is nonpareil at trailing people. No relation.

A “giant African (of) enormous strength.”

The Shadow’s real name is Kent Allard, *not* Lamont Cranston. Lamont Cranston is an agent of the Shadow. Cranston, a rich but jaded socialite who was gradually frittering away his fortune, was confronted one dark night by the shadow posing as himself (Cranston). The Shadow convinced Cranston to leave the country and allow the him to use his identity.

Due to this unusual arrangement Cranston is a very wealthy man today, as the Shadow runs his empire better than he did.

Allard served in W.W.I as an aviator. A pilot of some renown, he was called the “Night Eagle”. He gained this nick-name due to his amazing ability to see in the dark. Not only could he see in the dark but he could fly his airplane in the dead of night, something just not done at that time. This of course made him a natural for espionage purposes.

Allard’s career as a spy lasted till the end of the war. He then found life rather boring, so he took up explorer. He became well known as an adventurer and world traveler.

Kent spent seven years learning all the old man had to teach, martial arts, how to move silently in the dark (similar to ninja training), Oriental medicine, amazing Yoga skills, and finally the ability to cloud men’s minds.

He became the old monk’s successor, as only one man alive at any one time can possess this ability. Also he can only cloud men’s minds when he is in the “Shadow” persona, with his black cloak floppy hat, and mystic Girasol ring.

The Shadow returned to the “Mecca of the modern world”, New York City. He then formed an elite corps of agents to help him battle evil in whatever form he found it.

As the Shadow he wears a black suit, a black floppy slouch hat, and a red-lined cloak. The normally handsome, hawk-nosed Allard alters his face to appear sinister and gaunt, with an aquiline nose and fierce, blazing eyes.

His grim, mirthless laughter sounds the doom of many an evildoer. As the Shadow he is fearless, mysterious, and cunning. He is the original “Dark Avenger” that many have modeled themselves after. He has no qualms about punishing the guilty, even by death.

The Shadow is almost more of an elemental force than a mere mortal, and seems closer to the Spectre as a kind of spirit of justice and retribution than even Batman. He’s a scary and supernatural entity even to his own agents, and he seems pretty much invincible and omniscient to any foe less than an actual criminal genius in Fu Manchu’s class.

The Shadow was intended to be a frightening urban legend, and should be played that way.

As Crane or Clarendon he plays the role of dashing playboy.

“Who knows what evil lurks in the hearts of men ? The Shadow knows.”

“The weed of crime bears bitter fruit. Crime does not pay. The Shadow knows !”

The Shadow has made several appearances in the DCU, and has even met up with Batman. During that meeting Batman revealed the Shadow was one of his “role-models” 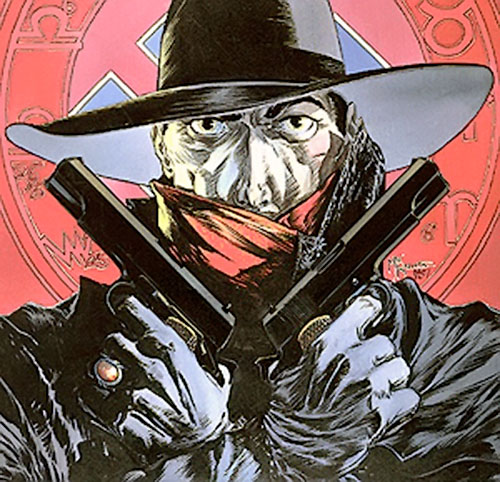 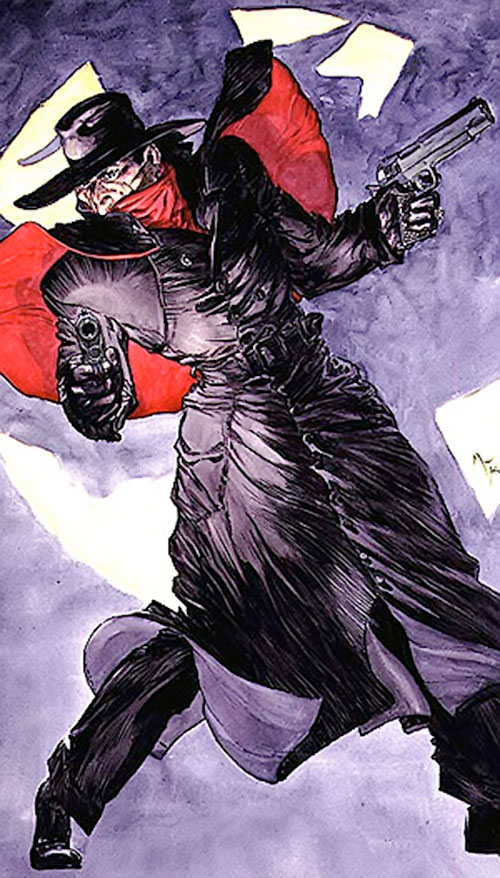 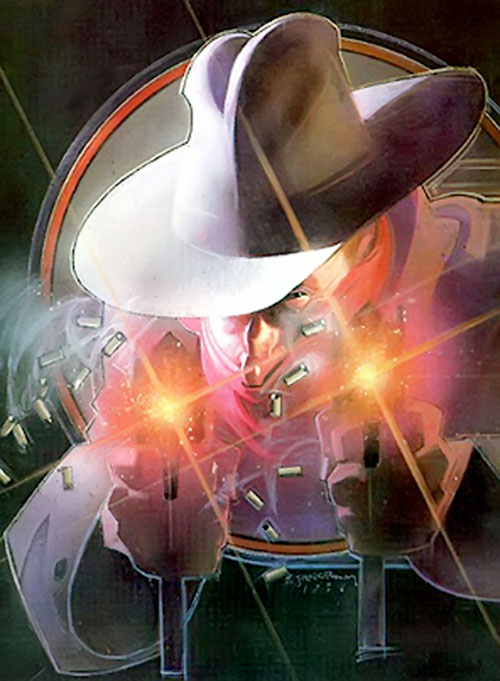 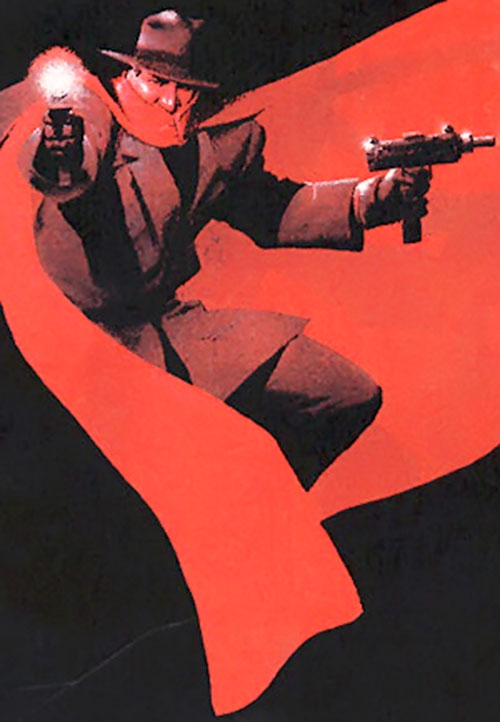 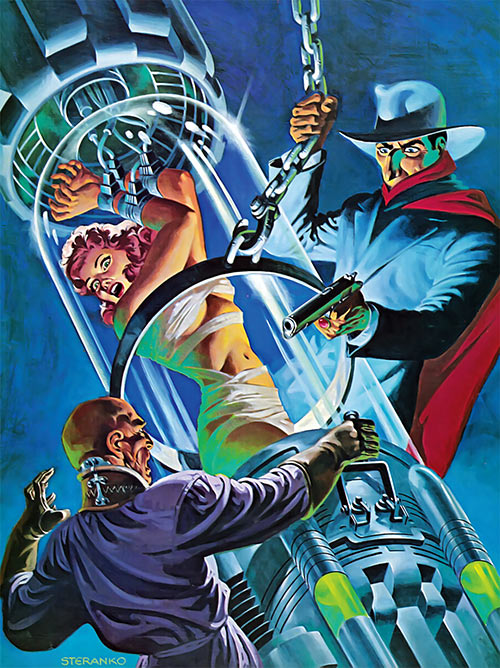