This classic is one of the first nuclear monster films and one of the first “Big Bug” films. Another notable example of this sub-sub-genre is Tarantula (1955). In 1954, Them! was Warner Brothers’ highest grossing film.

Them! is part of a genre sometimes called “atomic horror”, mostly encompassing 1950s US horror movies featuring science-based menaces. Examples include the Creature from the Black Lagoon, the Beast from 20,000 fathoms, Gwangi, the 50-ft woman, Ymir… as well as many awful duds such as the Giant Claw.

These ants are a fantastic mutation caused by the lingering radiation from the first atomic bomb. They will rip, tear, and hold their victims with their savage mandibles. But they kill with their stingers, injecting their victims with formic acid. The giant ants do not work alone and communicate with one another by a high pitched squeaking sound.

A normal ant may lift 20 times its own weight. And thus, these giant sized variety can lift over three tons!

Ants are the only species on Earth besides man who make war, making slave laborers of captives they don’t kill. They also have an instinct for industry and social organization. Furthermore, they display a savagery that makes man look feeble in comparison.

These giant ants are very good diggers. Working together the colony could dig hundreds of feet into the Earth. One queen can lay thousands of eggs. New queens could emerge from these eggs, fly forth and build their own nests. So forth and so on each reaching hundreds of miles before beginning a new colony.

A new queen once she has established her new nest will lose her wings and never leave her new home. The new queen will live and continue to lay eggs for 15 to 17 years. If this is allowed to happen, man as the dominant species on Earth would probably be extinct in less than a year.

However, they have lots of weaknesses as well. They have become nocturnal creatures since they don’t like the heat of the day. Despite their speed when small they lose that after the mutation and have become quite sluggish after growing to giant size.

Their armored bodies can’t stand up to small arms fire for long. They will not cross deep water as they breathe through their sides.

The New Mexico police received a report of a child walking in the desert near Alamogordo. The police searched by plane and ground. Just before giving up the aerial officer spotted a girl walking alone in the open. The child, five or six years old, was in apparent shock, starring off in space and would not answer any questions.

The plane radioed back to the squad car to have them investigate a car and trailer ahead. The girl originated from there.

The trailer had been ripped open. A short investigation by the two officers found blood a pistol, sugar cubes scattered about and an odd footprint. One officer also found an odd round plastic piece. It turned out to be part of the small girl’s doll, confirming that she had come from the demolished trailer.

After the forensics team searched the scene, the two officers went 12 miles down the road to Johnson’s General Store. Upon entering they found the store ransacked. They also located more clues. A rifle bent in half, more sugar, and the body of the shopkeeper himself.

The older policeman, Ben Peterson, leaves his younger partner at the store to wait for the forensics team. The younger officer hears the eerie sounds of the giant ants nearby again and gets killed when he investigates.

The investigation steps up

Mr. Robert “Bob” Graham of the FBI joins the investigation. Eventually, they bring in two doctors; the near-sighted Dr. Harold Medford and his lovely young daughter Patricia, “Pat” for short, to assist.

The man is an entomologist, and they begin to formulate a theory. The first atomic bomb was detonated nine years before, back in 1945 in generally the same area as the murders were occurring. But the doctors wouldn’t explain their theory until they were absolutely sure. 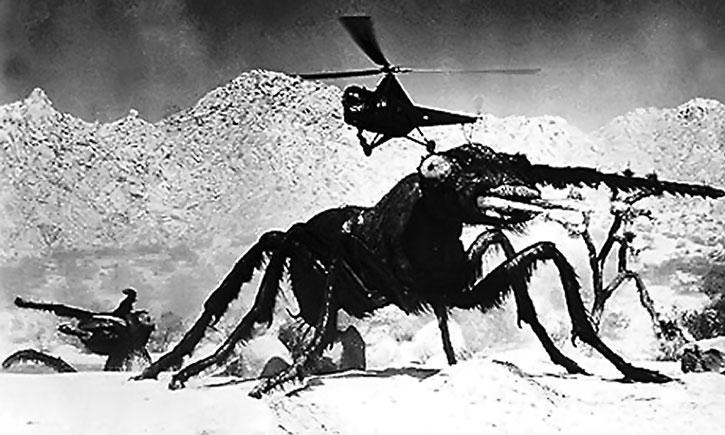 After visiting the girl and bringing her out of her shock with the scent of formic acid, the group continues out to the desert to investigate the footprint again. Patricia mentions that with so little food in the area “they” would have turned carnivorous, but she won’t say who or what “they” are.

It turns out to be giant ants, which they gun down with a Thompson sub-machine gun. Apparently, their growth was caused by lingering radiation from the first atomic bomb.

A matter of speculative entomology

The policeman and FBI agent are warned that there are likely more of the giant ants around. As if on cue they hear the eerie high-pitched sound of the ant’s communication. Later, while flying and looking for the ant’s colony, the Doctor explains there could be hundreds or even thousands within it.

Patricia is the first to spot the nest. The giant ants are carrying the bones of their human victims out of the nest and discarding them down the side of the ant hill.

A plan is formulated. Use bazookas to keep the top of the nest as hot as possible. Then drop cyanide into the nest killing the beasts. Of course someone will have to go in afterwards to make sure all were dead.

After the plan is executed, three go in. Bob Graham, Ben Peterson, and after some coaxing on her part, Patricia Medford. They take with them a flame thrower, a machine gun, and gas masks.

Practically all the ants they came across are dead. The few that are alive are killed with a few bursts from the flame-thrower. After burning the queen’s chamber they find that two had hatched after the cyanide attack and apparently fled the nest alive. Both were new Queens.

The threat of royalty

After that, Washington is informed. The Doctor lays it all out for the staff, so they can decide how to handle this new threat. They keep a tight lid too, no reporters.

A pilot then spots the ants flying west. Following that, a ship at sea gets boarded and the crew killed. Every lead gets followed in pursuit of the elusive giant ants.

Finally, they are found in the Los Angeles River culvert. The ants are crawling in and out of access tunnels. These tunnels run all over underneath the City, some 700 miles worth of them.

The military arrives and the City of Los Angeles is put under martial law. The stage is set for a titanic duel that will set in motion the extinction of either the giant ants or the race of man!

They look like normal ants, only giant sized. In a black and white film the ants appeared black in color but could be any color the normal sized variety could be.

The sound of the ant’s communication is described as strange ululating echoes. Loud, distinctive stridulating calls that become the iconic signature of the beasts.

These ants react completely on instinct.

Robert Graham: “Pat, if these monsters got started as a result of the first atomic bomb in 1945, what about all the others that have been exploded since then ?”
Patricia: “I don’t know.”
Dr. Medford: “Nobody knows Robert. When man entered the atomic age, he opened a door into a new world. What we’ll eventually find in that new world, nobody can predict.”

I would play this out exactly as it happened in the movie. Unexplained murders, lots of clues, dust storms and darkness to hide the ant’s movements, then a confrontation and a realization of what the heroes are up against.

Drawbacks:
Power Loss: 1 RAP of damage is enough to disable an antenna. If both Antennae are damaged the ant loses the use of Analytic smell/tracking scent (FC 2), Hypersensitive touch (FC 1), and its’ Miscellaneous Advantage (½ Cost). Serious Irrational Attraction to Sugar. Serious Physical Restriction (Blind), Strange Appearance. 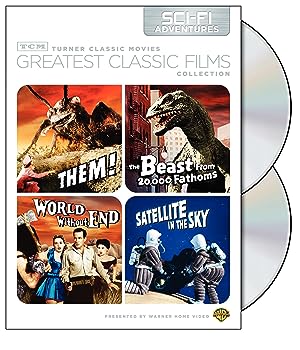 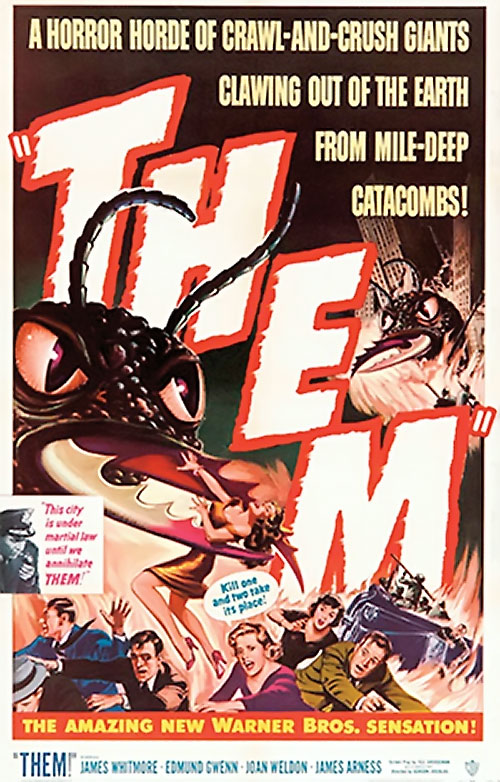