They have a profile thanks to an old Dragon Magazine article about them, as an easy stats conversion. Thus, their profile will need to be redone to more modern standards one of ’em days. Plus, it seems limited to the Avengers storyline.

Therak is a nightmarish-looking brick . His strength, durability and multiple arms allow him to go mano a mano with Wonder Man.

Of all the members of the Deathweb, Therak is the most spider-like. His body is covered in a chitinous carapace that resembles the shell-like skin of some spiders. His eight limbs (two legs, six arms) have also changed to less human proportions, with the arms ending in four-digit grasping claws and his feet growing two toe claws for grip and stability.

Therak’s head has also become spider like. His eyes glow an opaque red that hints at his powers being ionic  in nature. 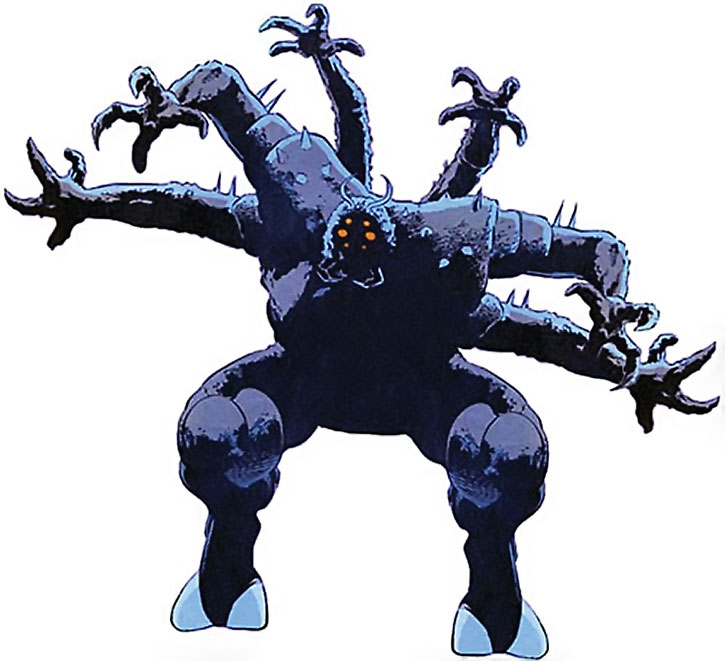 Therak only whispers when he speaks. Due to the radical changes in his body structure, it may be too difficult or too painful for him to speak in a normal voice. What little he has said indicates he’s a bitter, angry person who takes out his pain on others.

He is not one to take the initiative, but is content to wait for others and directions from his allies and employers.

He has a brutal fighting style more like a barroom brawler than a trained fighter.

These guys would have first appeared in the DCU when anonymously hired by Oracle. She had learned of a crime being prepared by Black Mask using a small army of minor supervillains while the JLA was recuperating from the fight with rogue angels on the West Coast, and had to turn to mercs for muscle.

Deathweb performed adequately along with Black Canary. However, Oracle was careful that they would not learn too much in the way of advanced tactics, as they will undoubtedly oppose super heroes one day. Black Canary and Arachne left with an unresolved, vicious feud.