Once fully charged, Thermo is superhumanly fast and strong. He can hit Spider-Man (Peter Parker) or throw a semi.

He can also unleash bio-electric bolts from his hands. These behave like generic energy blasts, not like an electrical attack. And he later demonstrated the power of flight.

The Thermatronic Man powers up by draining the bio-electric energy and heat from people (and, presumably, animals). His touch can weaken even superhumans, but is not normally fatal. It leaves its victims in a state of hypothermia from which they can be saved by basic hospital care. This power killed once, but it may have been an external factor, like a heart attack.

It is possible Thermo’s powers degrade if he’s not wearing his special costume. It was never demonstrated, but I’d consider it likely.

Since his reasoning seems altered, our game stats feature lower Skills from what they likely were while he was sane.

Christine and Walter Michaels were nutritionists working on an unorthodox project. It was a hi-tech method to beam synthetic vitamins directly into the body via microwaves. Walter Michaels insisted on testing the process on himself, and entered the experimental chamber wearing a special absorption-facilitating costume.

The experience went awry, of course, and Michaels acquired super-powers, of course. While he was under hospital care, he absorbed energy from a nurse and started becoming mad from the power rush.

During the following days, Michaels — now calling himself Thermo, the Thermatronic Man — slept by day and mugged people by night. He absorbed their heat and energy to power himself further up. The press dubbed him the “Street Stalker”, as each night drained victims of hypothermia were found in the streets.

He eventually tried to reach his wife for help. But Michaels burst in the lab right when the Michaels’ chief assistant and best friend, Paul Bradshaw, was comforting Christine. Irrationally assuming that they had sabotaged the experiment to kill him, Walter killed Paul and fled.

During those days, Thermo clashed with Spider-Man and Paladin, defeating both adventurers. He would have killed Spider-Man if not for the Dazzler’s fortuitous intervention.

Fleeing from the three heroes, the Thermatronic Man found an abandoned building. A lame pseudo-Satanic ritual was taking place in the basement, led by a two-bits grifter. Feeling this cult should be his power base toward a new age, Thermo stepped in. Through raw power, he convinced them he was indeed superior and could turn them into superhumans like himself.

Thermo later seemingly chose the life of a lower-profile superhuman criminal. Perhaps he operated below his full charge, as his full power would attract attention as during his “Street Stalker” days.

He was, for instance, seen at a huge A.I.M. weapons expo among throngs of obscure costumed criminals.

Thermo later attempted to steal from the Baxter Building, using his more recently developed power of flight to enter through a hole in the building. Before he could abscond, he was beaten up and handed over to the police by Quasar (Wendell Vaughn), who had just learned he had lost his father.

Thermo feels incredible power coursing in him whenever he’s charged up. This feeling of untold power alters his mind. Whenever he’s seriously charged he goes power-mad, wanting to conquer the world, or have the world worship him, or something equally confused but megalomaniac.

He also tends to react to situations in a paranoid fashion. But he’s not preemptively paranoid.

Thermo later became… well, not really sane, but less prone to ranting and confusion. While he was still power-mad, he was more careful and calculating. Not much was seen of Thermo in that state, as he was savagely beaten by Quasar.

“I’m losing control ! Letting the power command me ! M-maybe I need help ! Yes, that’s it ! I need to find someone to…”

“It felt good killing Bradshaw ! He deserved to die ! And besides, I required his life energy to feed my power. I require yours !”

“Perfect ! Men have chosen to abandon this place ! It is only fitting that the ruins of humanity should form the bedrock for new man ! No ! Not a new man — A GOD ! I am power incarnate ! The world must be made to serve me !”

(To his wife) “No ! You’re wrong ! Walter Michaels is long dead – as you are going to be ! I must replenish my bio-electric energies !”

Well, he’s so obscure… He could have been an old Green Lantern–Green Arrow foe. Since his energy blasts are yellow and he could presumably make himself shine with a yellow aura.

Bonuses and Limitations:
Numb has No Range (-1).

While he was quite powerful in his initial appearance, Thermo posed little threat when he encountered Quasar. In part because Quasar was most in grief and anger and went all-out against him. This is mostly modelled by the Flight Loss Vulnerability. Furthermore, Thermo only had 10 HPs at this point.

Thermo didn’t have Flight during his original appearance. Since he seemed less powerful while flying to flee from Quasar, I assumed he needed to divert his energies from raw physical might while flying. 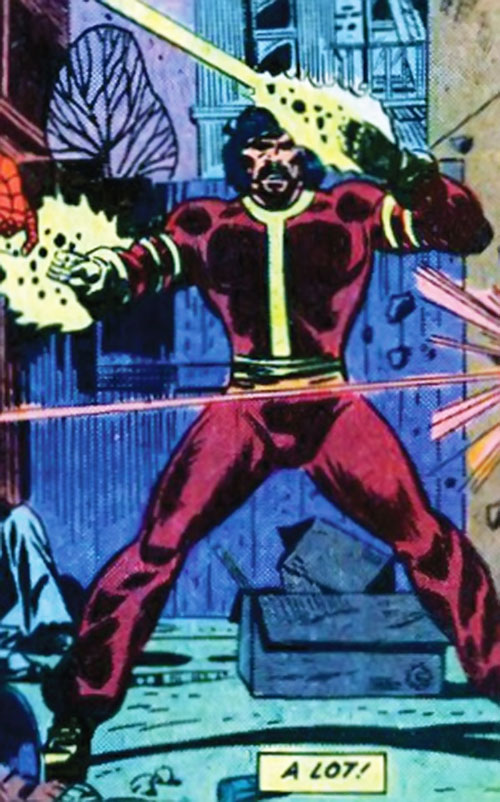 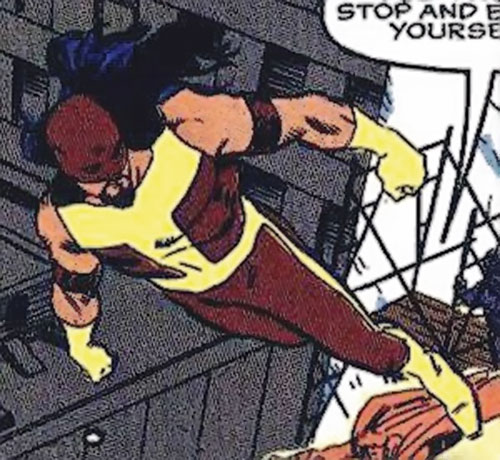