“They” use weaponry and technology that was markedly superior to anything used by the Knights of Wundagore, making engagements very one-sided.

The gear they had was probably not built by the Man-Beast. While he is a genius with super-tech, it seems unlikely that he could reach this level. Presumably it was procured from an undisclosed alien source.

Being cyborgs, it is not entirely clear what is Equipment and what is Powers. For simplicity’s sake, everything has been written up as Powers in our game stats. They appear to wield rifles, but it’s unclear whether those are part of their body or hand-held weapons.

The cyborgs’s main asset is their force shield. It is maintained invisibly toward the most likely direction of attacks. Even ambush are very likely to just fruitlessly hit the unseen shields.

The force shields take the form of a half-bubble in front or at one side of a cyborg soldiers. If such force demi-bubbles touch each other they’ll merge to present a continuous surface.

Thus the cyborgs prefer to progress in formation, within a few metres of each other. Their force shields will thus an efficient shell around the entire unit. When they have to break up formation or stand further apart from each other they are considerably more vulnerable. This is comparable to Roman shields tactics.

The force fields do not appear to block assailants. It is possible to run up to, or even leap upon, the cyborgs and harmlessly pass through the force fields. Generally, hand-to-hand combat backed with super-human strength works against them. But the martial skill and strength of the cyborgs is not to be underestimated – and getting close enough is a problem.

The cyborgs chiefly used energy weapon reminiscent of plasma weapons. The beams could be swept like a laser or explode on impact like a powerful charge of explosives.

They also had rifle-like weapons that could shoot mini-missiles, to engage opponents moving faster than the plodding cyborg warriors. The missiles could fly unerringly after being fed sensor data. Furthermore, their payload could be modified in flight (between, at the very least, lethal and non-lethal).

The 12 members of this cyborg unit are among the last known survivors of the original Counter-Earth. This planet was created circa 1971 by the High Evolutionary as a grand experiment. Counter-Earth was sped up until it reached a state very similar to Earth the same year, then resumed a normal tempo. 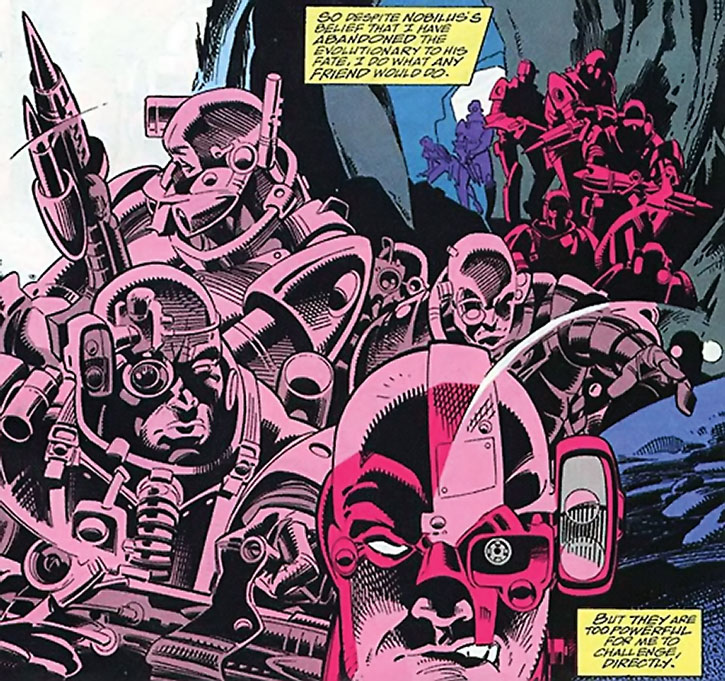 The High Evolutionary wanted to experiment with a world with no concept of evil. But his perverted creation, the Man-Beast, snuck into this Eden to become its little Satan. He ruined the experiment and spread misery.

Dejected, the Evolutionary wanted to destroy his experiment. But he -was persuaded to let the unique being Adam Warlock act as the Saviour of this world. The arrival of Warlock and his clashes against the deadly Man-Beast were foundational religious events on Counter-Earth, and witnessed world-wide as they occurred.

It’s the end of the world

Years later, Counter-Earth was “kidnapped” at the behest of aliens called the Beyonders (not to be confused with the Beyonder, most famous for setting up the Secret Wars). Though this didn’t change much for the locals, they were exposed to certain energies. What effects these had is unclear, but it seems that their spirits were weakened.

Counter-Earth went on for two decades. But it was then destroyed by Thanos, using the Infinity Gauntlet. As the planet disintegrated the Man-Beast, who had been orbiting Counter-Earth in a cloaked spaceship, rescued 12 men.

(This number was presumably meant to prolong the less-than-subtle parallels between Jesus Christ and Adam Warlock, which suffused the 1970s Adam Warlock stories.)

Under his guise of “Omega” Man-Beast taught them his creed of hatred. One imagines that he wanted to turn them into his twisted version of the apostles who had followed Warlock in the early 1970s.

Brainwashed, battered and having lost everything, these men were eventually forged into a squad of powerful cybernetic warriors.

This unit was sent by the Man-Beast to hound and harass his creator and enemy, the High Evolutionary. 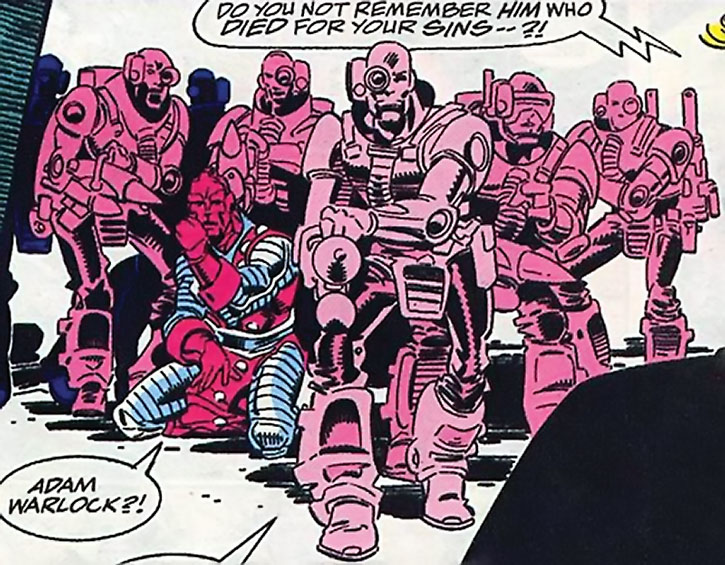 By accident or by design, they started their attacks right after the High Evolutionary was crippled. The H.E. had witnessed the birth of a new Celestial using a full battery of advanced sensors, which damaged his mind. He was now incoherent and mostly child-like.

His followers — led by Nobilus of the New Immortals — attempted to get help. But the relentless, devastating attacks by the cyborgs made that impossible. Attempts to lose the pursuers did not work either. Eventually the High Evolutionary’s spaceship was too damaged to keep fleeing. The cyborgs then moved in for the kill.

At this point Adam Warlock — himself recovering from traumatic experiences — had just located the High Evolutionary. Nobilus beseeched him to help against the cyborgs. The wary Warlock opted for indirect strategies after witnessing their firepower.

Warlock successfully ambushed one trooper. But his second target reacted in time and threw Warlock off his back to gun him down. Warlock’s soul gem reacted by attacking the cyborg. Since both Warlock and the Soul Gem’s victim appeared dead on their scanners, the cyborgs resumed their march.

The scan done by the cyborgs was poor, and Warlock was still alive. Furthermore, he had been in contact with the soul of the cyborg soldier, and now knew whom these men had originally been.

By the time Warlock recovered, the cyborgs had taken down the last defenders — losing another man to Nobilus — and were surrounding the High Evolutionary.

Warlock played his last card. He stepped into the room and announced himself as the lost Saviour of Counter-Earth. Recognising the messiah from their childhood, the cyborgs faltered. Warlock accused them of having put another god before him, and to have listened to the message of hatred and murder taught by Omega.

Unable to deal with this — presumably due to their spirits being diminished by the energies of the Beyonders — the cyborgs self-destructed rather than face what they had become.

The cyborgs are machine-like and relentless, behaving like the archetypal robot soldier. However, if they are addressed using specific references to their past life, they will start reacting as human beings, as their normally insensate consciousness reasserts itself.

They dispassionately analyse data, and their strategy is often to reserve firepower for their main target. These optimised strategies and energy conservation concerns may come back and bite them in the behind. For instance, they won’t perform coups de grâce an ordinary soldier would do if a superficial scan indicates that an opponent seems dead.

Generic member of the unit

The material is slim, but we do not have a profile for far-future cyborg soldiers so they fill a slot. Stats are speculative – it’s impossible to tell how much of his power Adam Warlock had recovered when he was fighting them.

Source of Character: Warlock and the Infinity Watch #3-4.

Writeup completed on the 4th of November, 2011. 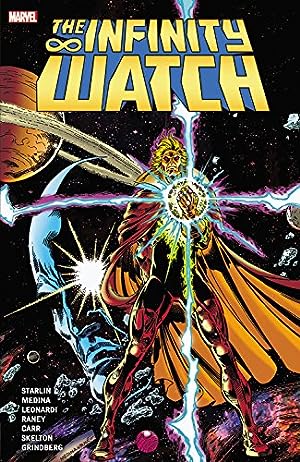 Collected Warlock and the Infinity Watch 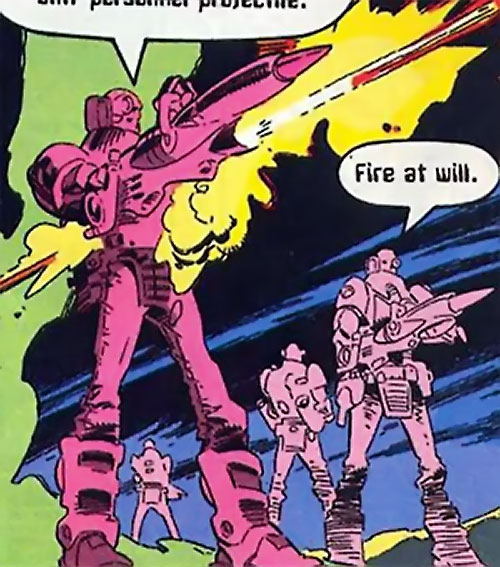 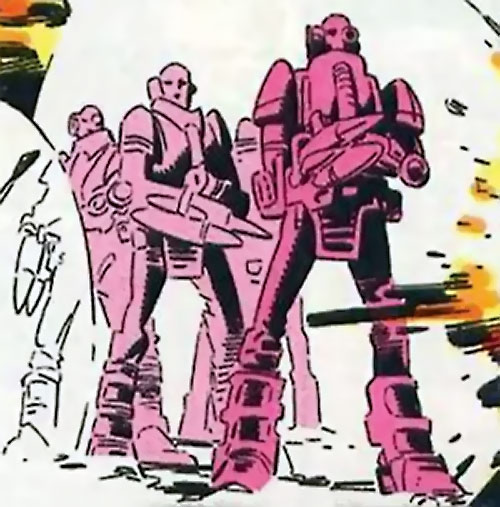 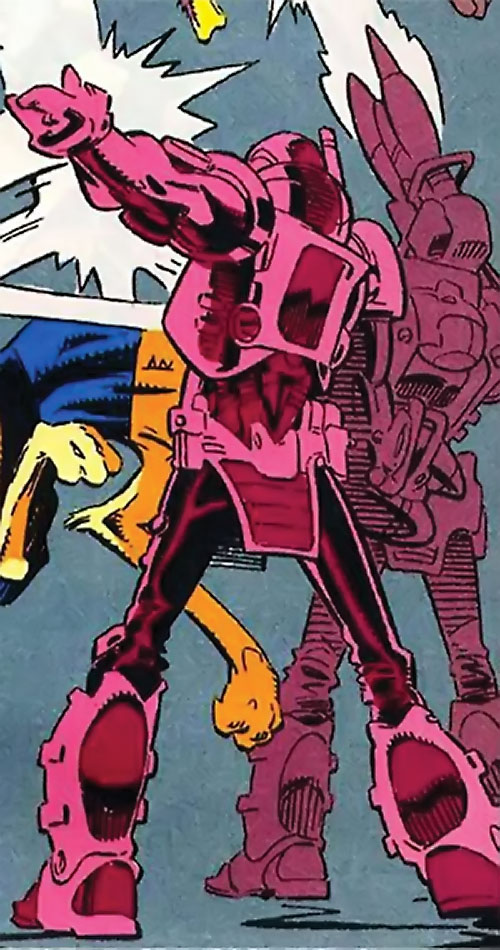 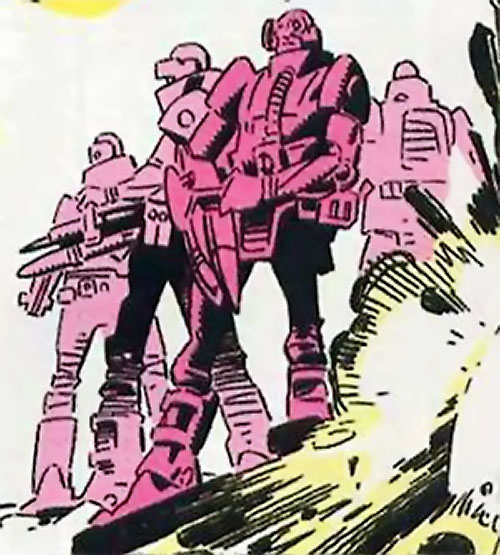