The Thin Man can convert his entire body into a highly malleable state at will. This enables him to stretch, deform, expand or compress all or any part of his body into any shape. He most often uses his power to elongate portions of his body, such as his arms, or to flatten his body to the thickness of a sheet of typing paper, enabling him to pass under a shut door.

Shortly after receiving his degree, Doctor Bruce Dickson set off on an expedition to the Himalayan mountains, attempting to conquer Mount Kalpurthia. Upon his being hit by a powerful blizzard, he sought shelter in a cave, where he discovered something fantastic !

He found a hidden utopia within the mountain, though he fell unconscious upon the beginning of his exploration of the place. When he awoke, Doctor Dickson discovered the mysterious denizens of this secret land, called Kalahia by the natives, and their incredible secret.

All of the locals possessed the power to make their bodies pliable, and they’d granted him this amazing ability. Staying for a time, he eventually fell in love with the Elder Chief’s daughter, Olalla, who became his apparent paramour during their time together.

While there, the Kalahians demonstrated their technological superiority to Doctor Dickson, showing how they can communicate with the spider-like beings that were apparently living on Mars at the time, and their technique for entering the 7th Dimension (as they’d already conquered the other six, apparently).

Further, it would seem that the Kalahians shared Bruce’s desire to combat evil, as they demonstrate a crime in progress on their long distance viewer thingermabob. This crime is the drive-by shooting by mobsters against some taxi cabbie (perhaps Taxi Taylor…).

Seeing this evil taking place, Dickson and Olalla leave Kalahia for the United States, intent on stamping out the evil that they have witnessed in action. They bust into the city they viewed and gunned down several of the criminals with the plane’s heat bullets. Of course, several folks noticed this, and as such, Dickson and Olalla decided to operate at night from then on, so they wouldn’t attract too much attention to themselves.

That night, in fact, the duo tracked down and went to work on the mobsters killing cabbies. Thin Man worked them on a personal level, while Olalla gunned them all down with the Stratoplane. The two then tied up their leader, leaving him for the cops, and went looking for new crimes to bust up, the first of which involved a planeful of German infiltrators.

Attacking their plane as soon as he found it, Bruce liberated a captured Red Raven, and the two heroes defeated their German foes. The two then answered a call for help from Captain America’s side kick, Bucky, and eventually joined up with the Liberty Legion.

This team freed the Invaders from mind control at the hands of the Red Skull and his Nulla-Rays. They decided to stick together to defend the nation from threats that arose from within. Over time, though, the Liberty Legion and the Invaders eventually blurred into one big team.

After the War, Bruce retired from super-heroing with his lady-friend, Olalla, presumably returning to Kalahia in order to live a life of pastoral happiness (and all the other good stuff). This retirement didn’t last, however, as the residents of Kalahia were apparently slain by Agent Axis.

An aghast Thin Man set out to find and kill the man, now, and hooked up with the C.I.A. in order to use their resources to track down all sorts of loose war criminals. Of course, his main target was Agent Axis, who he finally found as an old, old man.

With the help Captain America (since returned from the icy wastes), he confronted his shriveled up foe. Of course, both Bruce and Agent Axis were rather old by this time, but that didn’t prevent a fight between the two that resulted in Agent Axis’ death.

Horrified by the result of this battle, Captain America hauled Thin Man off to jail, to serve time for the murder of a murderer. The last time we saw Bruce, though, he had since gotten out of jail (must’ve pleaded temporary insanity) and was still hunting remaining Nazis in a most bitter fashion.

(from http://members.home.net/firebomb/format13.htm)
The Thin Man comes across as a worldly, savvy hero, capable of making his foes look like fools while he deals out justice. He loves to crack wise in battle, and tends to be a good team player, overall.

Since the Thin Man predates Elongated Man, he could be made into a Gingold-drinking precursor of Elongated Man during WWII. The Liberty Legion would of course be a subgroup of the All-Stars Squadron.

Advantages:
Credentials (US military, Low – as a Liberty Legion member).

Drawbacks:
Married (Olalla) (after WWII, he loses that Drawback but gains a SIH of Nazi War Criminals, esp. Agent Axis, and Age (Old)). 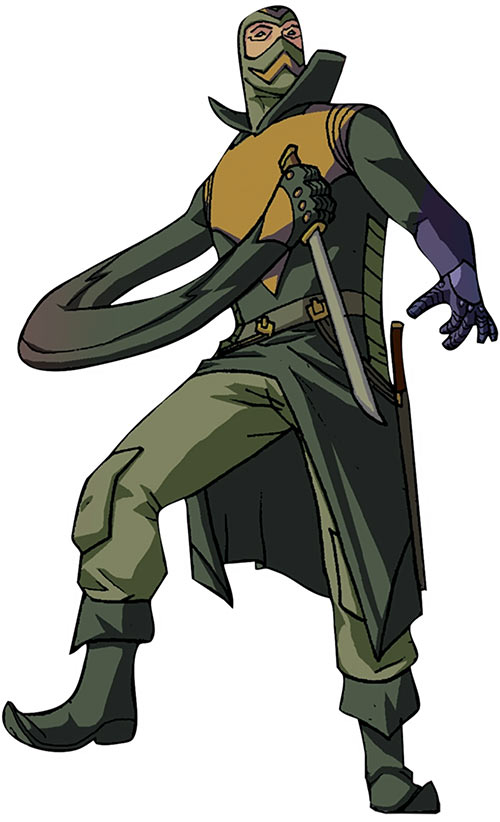 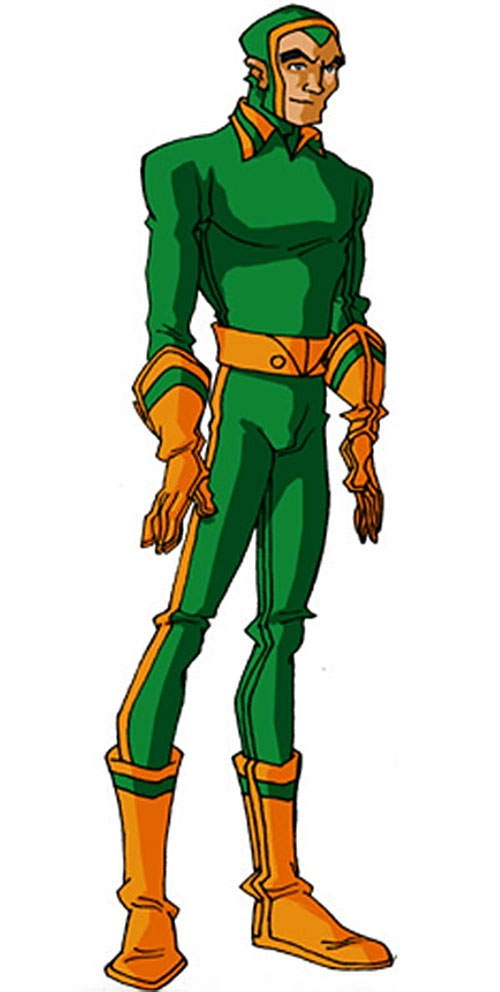