“Thin Men” are a genetically engineered species of evil alien invaders, featured in the 2012 XCom video game. Unless you’re well acquainted with it, we suggest reading our XCom Project article first.

They are archetypal “Men in Black” conspiracy fodder  with a dose of V – the Visitors thrown in.

Thin Men are about 2 meters tall and weight 80 kilograms – hence their nickname. All evidence points toward them being some sort of reptilian humanoid species, but whose genetics and physiology were rewritten using brute force so they could vaguely pass for human and operate on Earth more easily.

Their ossature is reticulated like snake vertebrae. Many of their longer muscles are much stronger than the human equivalent. As a result the Thin Men move in a jerky, off-kilter but rapid way and can perform some inhuman acrobatics.

It seems likely that they have enhanced strength, though this is not demonstrated in-game. Thin Men may also have reptilian-like assets and limitations that aren’t apparent in game.

Thin Men can make sudden, superhuman jumps. They can easily leap on top of a parked semi or even a three-story building. This gives them a significant tactical advantage in urban combat.

There have been incidents of Thin Men reinforcements coming out from nowhere, as if making a gigantic leap from afar. It is possible that they have one-shot “jump enhancement” anti-gravity equipment that can fit in a pocket.

Their chest includes huge glands from which they can expectorate a gob of fierce poison, which manifests as a small green cloud at the point of impact. This seems to also have some corrosive properties, though this is unclear.

This toxin isn’t as potent as their guns, but it still is deadly and can ignore most cover due to its ballistic arc. Killing a Thin Man will usually perforate the glands and release a poison cloud over the corpse.

Thin Men are usually equipped with a plasma carbine (that they wield much like a large pistol). Like most alien equipment it shatters when the wielder is slain. This carbine is significantly more powerful than most Earth small arms.

Many Thin Men are remarkable sharpshooters, easily the equal of the best Human special forces. Those encountered on Earth also seem trained as spaceship technicians and pilots.

Whether they can talk in any human language is unrevealed. 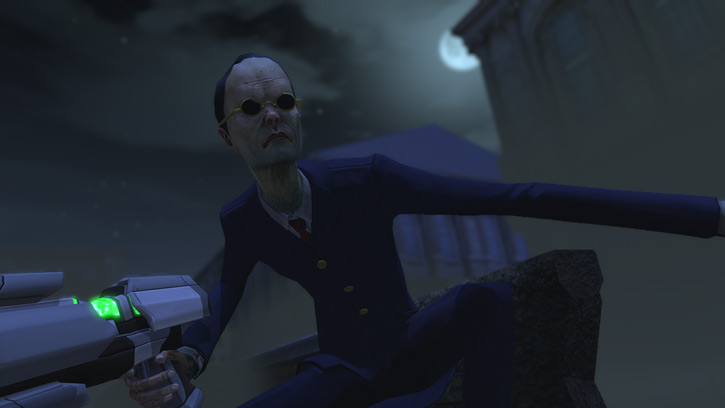 Thin Men were clearly engineered to serve as a sort of infiltrator for operations on Earth. They seem to be a combination pilot/paratrooper force.

Typical missions seem to include sabotage and terrorism, serving as the flight crew for an UFO sent to Earth, or reinforcing sectoid aliens during abduction strikes.

Thin Men uniformly sport the “Men In Black” look – black suit with tie, black shoes, small round shade and outdated haircut. The imitation of humanity is so-so – they move wrong and their faces have clearly been brute-forced into human shape.

The Thin Men’s masters were unable to imitate human eyes, and the Thin Men’s eyes are clearly reptilian – hence the sunglasses.

However, they seem to mostly operate at night in a stealthy manner, and even with clear visual contact most people would assume a haplessly disfigured person (perhaps a burn victim) rather than a space alien. On the other hand, *three* eerily identical disfigured guys dressed like stereotypical G-Men… 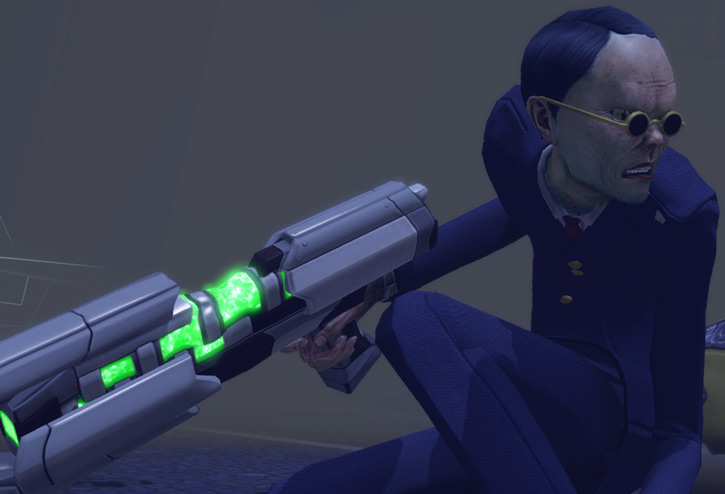 Thin Men are somewhat reminiscent of Hugo Weaving’s Agent Smith, perhaps because Smith is such a memorable “Man In Black” archetype. It has been reported that they actually are caricatures of Sid Meier , though.

*However*, from the texts in XCom: Enemy Unknown one gets the impression that Thin Men are supposed to be much more human-like than the in-game model.

Perhaps the most man-like Thin Men do the infiltration work, and the ones seen in the tactical game are relative failures in this regard – who thus can’t really do infiltration and get detailed to less subtle missions.

Possible Powers:
GMs might consider Directional Hearing: 05, Telescopic vision: 02, Ultra-vision: 04. These suggested Powers follow a loose reptilian theme, and help make Thin Men deadly shooters who can unerringly locate their targets – like in the game. Also, see below for the “psychic static”.

“Psychic static” is hypothesized in our main XCom article as a way to explain several aspects of the tactical gameplay. It is assumed to be an ability possessed by all alien troops, who are radiating “psychic static” – without having to use any Action to do so.

Describing it as Powers would be hopelessly intricate, so it is best treated as an environmental condition with the following characteristics :

Furthermore, there is a sort of Aura of Fear effect that amplifies stress responses within 4 APs of any alien agent. This effect is tested against a non-standard MIN/MIN OV/RV, and Iron Nerves does apply.

Aliens cannot put HPs behind this effect (it’s not an Action) but they are entirely immune to the effect. Targets can use HPs to resist these attacks.

If the comrade is a close friend, increase EV by 1.