As you can see, Ben has been pumping Hero Points  like crazy into enhancing his stats. His STR has been steadily rising with time and training, and he has overcame his grief to develop a very powerful personality. He can be considered as one of the greatest mortal fighters on Earth, as the Champion discovered to his dismay.

The Thing uses what his almost a Genre Rule for the FF. In most every situations, he will use very little HPs, and hence will seems less powerful than he really is and may even be knocked out by tough foes.

However, when the situation goes critical and the fate of Earth lies in balance, HPs flow like water and the FF are able to beat cosmic menaces. In fact, Ben holds the record for the longest string of Last Ditch Defenses in comic books history (during his aforementioned fight with the Champion). 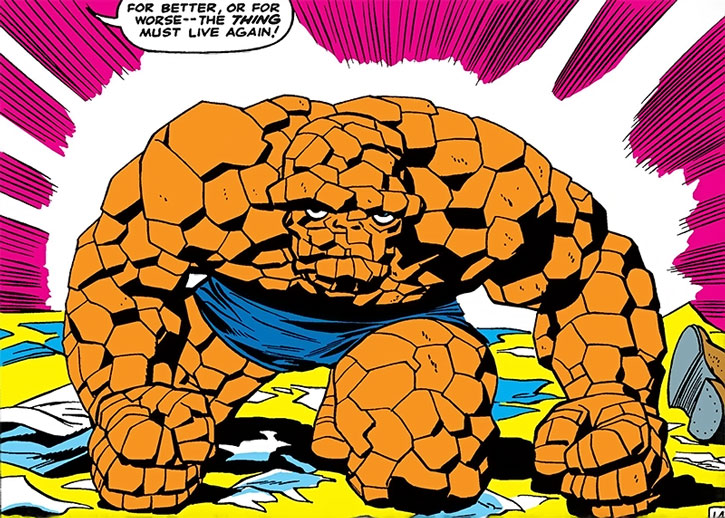 The Thing is bulky (the same figure as the Kingpin) and looks covered with orange stone fragments all over his body. While working as a super-hero, he often wears a pair of blue trunks. He has sunk in blue eyes and no hair. The lips are missing and there is just a crack where the mouth usually is.

To some he might look funny, but most people are scared of his appearance. When taking a walk in private he usually wears a trench coat – although he still looks big.

The Thing’s movement might look a bit clunky and clumsy, but he actually moves much faster than what his size would indicate.

I think we all know about the classic Thing. He’s a greater than life figure, a grumpy New Yorker from a bad sitcom who smokes cigars, reads the sports section in the paper and pretends to have a bad temper. His fights with the Torch are both childish and well-remembered.

Below this rather comical figure lies the real Thing. While he’s gruff, he’s truly a man of the people, and has a heart of gold. He has tremendous resolve, compassion and willpower, and is an excellent leader. 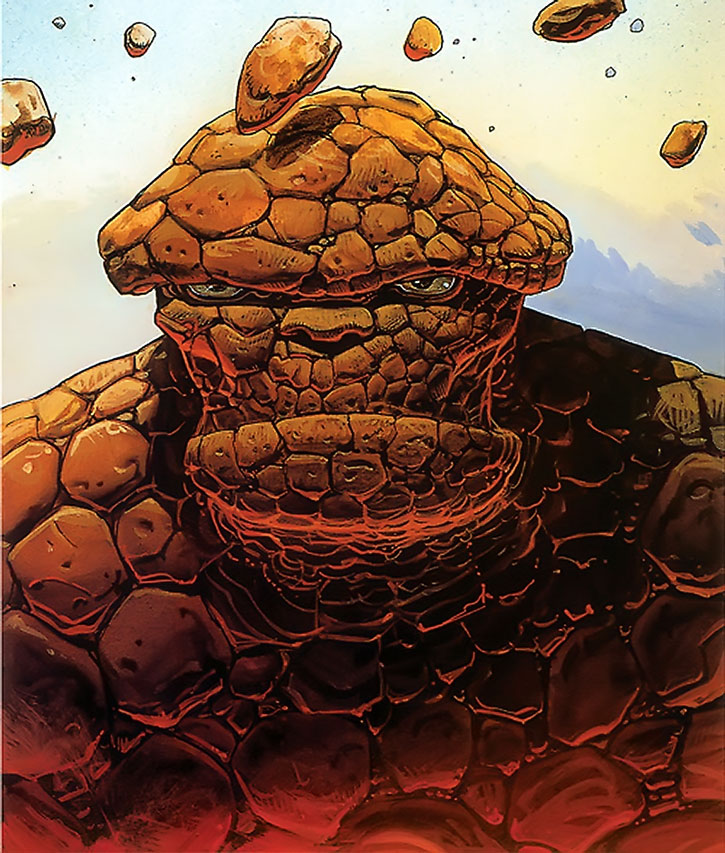 And yet, below this apparently simple, good man lies a tormented soul who cannot really come to terms with his physical monstrosity. While his depressive periods become increasingly rarer, they still exist, and Ben would like nothing more than being able to know love.

Although he dearly wants to become a man again, he was still willing to make the ultimate sacrifice and revert to his Thing state, as he knew that the world needed him and his raw power.

During this period, Ben reverts to his human state in several instances (it’s too rare to be an Alter ego, and would classify as a Power Complication subplot). The human Grimm has the following stats : 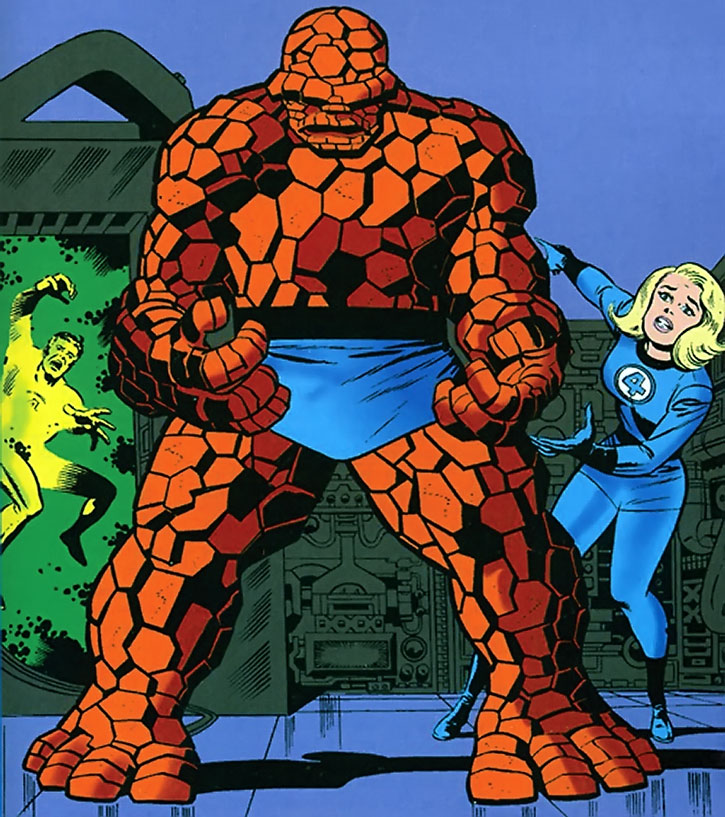 If using the optional, open-ended equivalencies, the Thing’s Strength is 16. Drop his lifting-only Strength. This raises his Attack/Effect PL to 14, costs 2 points, and raises his average PL to 12.2.

In his human form, he is not only less powerful, but less confident and dynamic. However, he finds an easier time getting behind a steering wheel.

By Sébastien Andrivet and the Angel ; DCA stats by Pawsplay. 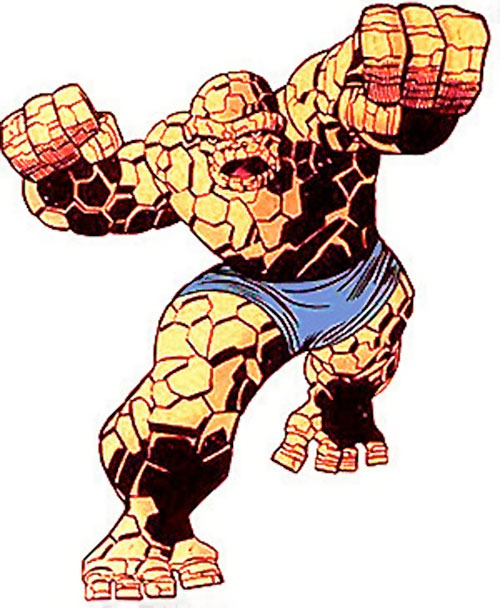 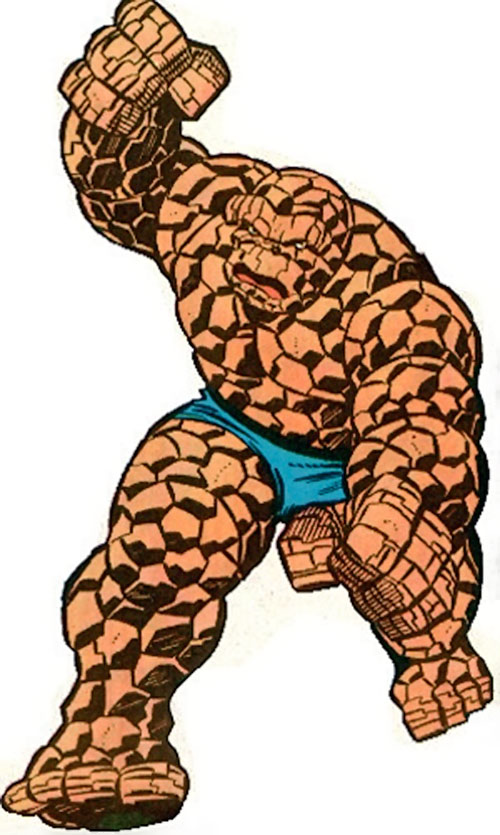 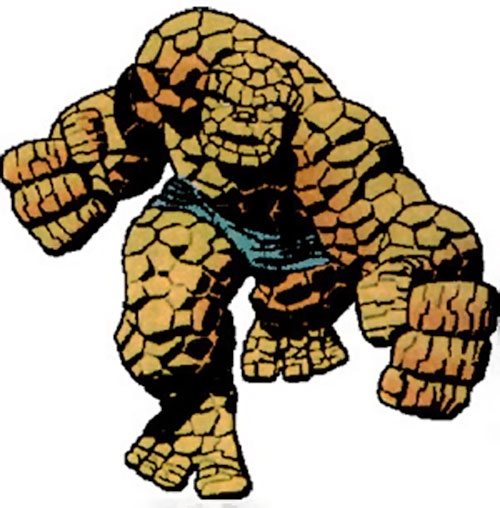 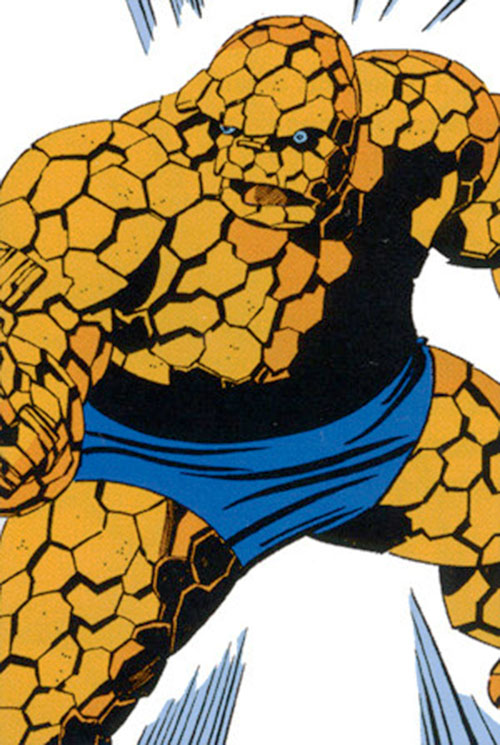