This was a RKO movie, back in 1951. It is a loose adaptation from the horror/sci-fi novella Who goes there?. If you want you can read the creature profile for Who goes there? first.

This isn’t the highest-profile movie adaptation of the tale. John Carpenter’s The Thing in 1982 holds that crown, though the critics back then reviled it. The 1982 version had a prequel in 2011, which tanked.

The Thing was fairly strong, though not superhumanly so. It was very tough though, due to its vegetable nature. One of the scientists compared shooting it to putting holes in tree bark.

At the same time, the station huskies were able to rip of its arm before it fled the scene. Still:

Due to seedpods in the palm of its hand, the Thing can reproduce asexually. This process requires a certain quantity of animal nutrients such as blood. It also takes an unrevealed time for the pods to grow.

The crew of the Arctic base was able to detect residual radiation emitted by the Thing by means of a Geiger counter. It is likely that this radiation was the result of exposure to the saucer’s damaged engines rather than an innate quality of the Thing itself.

The Thing’s flying saucer crashed in the Arctic near the North Pole. The alien apparently exited the craft only to be trapped inside the ice alongside its vessel. This happened as the water refroze in the wake of the craft’s meteoric descent.

A nearby contingent of US military personnel arrived on the scene to investigate. They inadvertently destroyed the craft while trying to melt it loose with thermite. A final survey of the area uncovered the Thing’s body. The team carved the Thing out in a huge block of ice and flew it back to their compound.

No longer trapped under ice

The Thing was kept in an unheated storage room. Thus, the block of ice remained frozen while the group decided what to do.

However, one of the guards overseeing the block of ice in which the Thing was held was disturbed by its appearance. He unthinkingly threw a electric heated blanket over it to hide it. The blanket eventually melted the block and the Thing escaped. It killed several sled dogs and men before being confined in the station’s greenhouse.

Experiments by the station’s scientists and the observations of military personnel led to a horrible conclusion. The Thing was using the corpses of the men killed in the greenhouse to grow seedlings from its own body. That the Thing used its “confinement” as an opportunity to plant its seeds was soon confirmed when it easily escaped the greenhouse.

There was another inconclusive engagement between the Thing and the Arctic base crew. The Thing then shut down the base’s heating system, presumably hoping to freeze the crew. The crew responded by holing up near the electrical generator. Furthermore, they rigged it to electrocute the alien when he came for them.

A last ditch attempt by one of the scientists to negotiate with the Thing was unsuccessful. The crew thus fried the alien menace on the spot.

The Thing was a large green-skinned humanoid. Its bald, beetle-browed head in combination with the color of its flesh gave the Thing a passing resemblance to the Martian Manhunter.

The Thing’s middle knuckles and fingertips were capped with short chitinous spikes. This material was compared to a combination of a beetle’s back and a rose thorn.

When wounded, the Thing would ooze a green sap.

The Thing was dressed in a button-over long-sleeved uniform jacket, pants and boots, all in matte black.

The only noises uttered by the Thing were seemingly inarticulate roars.

Dogs were upset by its scent.

Little can be discerned from the Thing’s behavior in the brief time it was active. The first things to happen to it upon its awakening were attacks by one of the station personnel and the camp’s dogs. Therefore, its hostility may have been a reaction to perceived threat rather than an innately malevolent nature.

However, the Thing did not take the opportunity to stand down offered by Dr. Carrington’s approach near the end of its attacks upon the camp’s crew.

Most of the Thing’s activities revolved around gathering enough blood to supply its growing buds in the greenhouse.

Though it is difficult to fully assess the Thing’s intelligence, it was smart enough to carry out some rather cunning actions. When it first broke into the greenhouse, it bent the lock back into place to try and conceal its presence. It even took a key so it could get back in easily. The Thing also recognized the relative human vulnerability to cold and shut down the camp generators.

Dr. Carrington suggested that the Thing was “not handicapped by emotional or sexual factors.” However, this supposition was based more on Carrington’s hopes and prejudices than any observed behavior. While the Thing’s asexual reproduction would likely exclude any sexual motivations in its behavior, it did seem to have very emotional reactions to being attacked.

The simplest way to incorporate the Thing into the DCU is to treat him as the representative of an alien species. As such it can be fleshed out (no pun intended) as needed for the campaign.

Another way to tie the Thing to the DCU is as a failed plant elemental similar to Solomon Grundy. He was a Soviet pilot of an experimental flying saucer using superscience derived from the work of captured Nazis. When the saucer crashed and exploded in the arctic the pilot found himself changed in the same way that other DCU elementals have.

It was not a very successful transformation. The pilot felt torn between his enmity of the Americans at the base camp and an instinctive urge to procreate in the manner of plants. Some of the samples may have survived the Arctic incident, allowing any number of uses by a creative GM.

Notes:
Skills assumes that the Thing was the pilot of the Saucer.

Equipment:
FLYING SAUCER [BODY 20 STR 13, Flight: 50].
The Thing was brought to Earth by a crash landing flying saucer. Little is known about it other than it being a disc that was approximately 50 feet (3 APs) in diameter with a fin jutting from the top aft portion and that it weighed 20,000 tons (20 APs). It was presumably capable of interstellar travel, though by what precise means is unknown.

Source of Character: The Thing From Another World (movie, 1951 version), character played by James Arness. 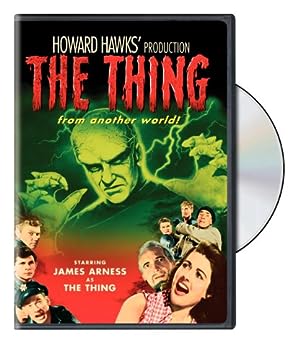 The Thing from Another World 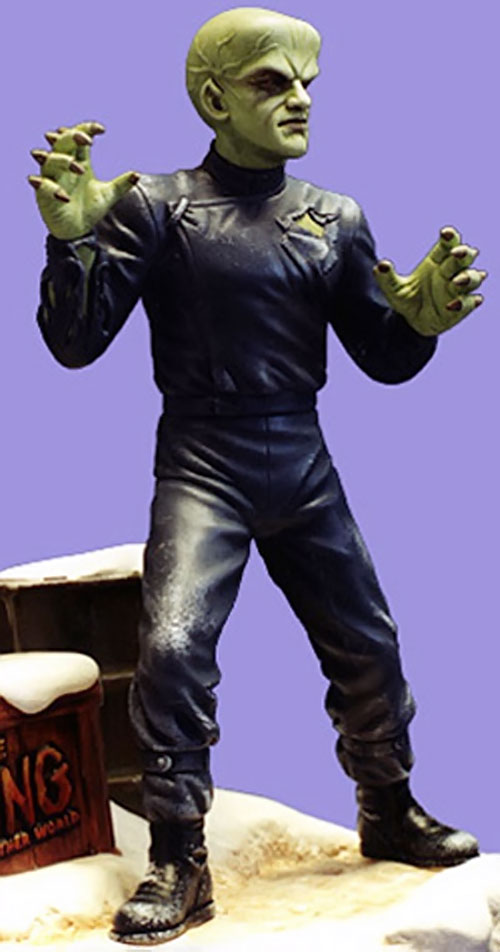