The creature exploits the fact that, by and large, its cells are made from a gelatinous protoplasm. These undifferentiated cells are nearly impossible to damage to any significant extent (in DC Heroes RPG terms, Invulnerability and Regeneration). They also can remain dormant for long periods of time, reviving when conditions are more conducive to survival (Suspension).

When it digests food (Vampirism), the thing is capable of analyzing each of the victim’s cells. Once this has been accomplished, the nucleus of each of the creature’s cells can convert the rest of the cell into matching the examined type. The result is that the creature becomes, cell by cell, a replica of whatever it has sufficiently studied (Chameleon).

As time goes on, the conversion becomes more complete. Eventually, even a microscope might not be able to show the difference.

Wait, it gets worse

More impressively, the creature can even create a second organism by dividing its mass (Split).

It is unknown whether this new organism is independant of the main body, or whether the two bodies can communicate. It was hypothesized by the science team that the creature would be able to devour a bird, become an entire flock of them, and then reform at its destination. Thankfully for humanity, this was never put to the test.

To make things worse, while it analyzes its victim’s cells, it also wanders its victim’s mind. The thing will thus learn its thoughts, knowledge, ideas, and mannerisms (Mind Probe). The result is that the creature can completely resemble its target in every way (Artist/Actor).

These psychic abilities are powerful enough to be passive, as well. They seem to “infect” those who spend more time around it (Hypnosis, Mind Probe, and Telepathy).

Approximately 20 million years ago, highly evolved creatures from a planet orbiting a hot, blue sun arrived in our solar system. They began a descent toward Earth, near Antarctica. Down it went, something going catastrophically wrong. Perhaps it related to the angle of Earth’s magnetic field over the continent.

Circling the pole to try to effect repairs, the ship was finally forced down by the stormy weather. It struck the solid granite buried beneath the miles of snow and ice, and cracked apart.

The ship was ruined, but at least one passenger survived. The alien creature stepped out and, within ten paces of the airlock, was utterly lost and probably snowblind. Another foot or two further, and the alien itself became buried in snow and ice, frozen solid just out of arms reach of its only shelter.

In the mid-1930s, an American polar expedition noticed the ship. Fascinated, they began to tunnel through to it. Mere feet away from the prize, the ice-ax struck a skull, cleaving into the alien creature’s head before it could be seen.

When the team saw what it was, the ax’s wielder (Barclay) became violently ill for a few days. The rest of the team set to cutting the alien from the ice for transport and study.

Meanwhile, the rest of the men continued on to the ship. They were able to clear a path to the alien machine, but could not open it, as its mechanisms had frozen through. Planning to melt the ice with thermite, they accidentally ignited the ship itself, and nearly collapsed the entire ice shelf for miles.

Needless to say, the ship was lost in the process. As were, perhaps, the ship’s other passengers.

The men, along with the frozen creature, made back for camp. After some debate, they finally decided to allow it to thaw, since no complex organism can survive freezing and rethawing. The expedition wanted to take cell samples for analysis. The creature, of course, proved to be the exception to the rule.

One by one, it ate the men and replaced them, going through nearly half the crew. When they began to suspect the reality of the situation, they discovered the animals also had been replaced. This prevented them from creating a good biological test. Meanwhile, one of the men went insane with fear and rage at the monster. He was quarantined to keep him from killing his fellows.

Finally, the men, lead by second-in-command McReady, concocted a plan to reveal who had been replaced by the creature. The creature(s) followed along with the charade, allowing one body after another to be revealed and destroyed. Finally, there were none left.

… except for “Blair”, the quarantined man. He had been working in peace for more than a week on a vast power source and technologies. These would allow it access to the mainland, where it could go on destroying.

Device and creature were stopped mere moments from its maiden voyage by McReady and his men.

The creature, in what is assumed to be its natural form, stands at about four feet tall. It has pale blue, iridescent skin that has a rubbery texture. Four boneless arms terminate in seven, tentacle-like fingers.

Its face contains three blood-red eyes, and a line-thin mouth containing snake-like fangs. It is topped with dark blue, worm-like structures that apparently serve as hair. These give the appearance of motion, even when they are perfectly still. Most people find the face to appear hateful, and this was apparently correct.

Its internal organs, apparently, are a yellow-greenish color when not imitating something else.

(The illustration used in this profile comes the Barlowe, and depicts the thing halfaway through turning into a sled dog).

The creature needs to feed, and has a decided preference toward living flesh. Feeding increases its mass, which it generally fissions off into a new creature. Since it can assimilate the traits of those it digests, this new creature generally replaces the prey. That allows it a measure of anonymity as it spreads and replaces the populace.

Other than slowly replacing every organism it encounters with replicas made from its own body, it’s remarkably pacifistic. That is, it prefers to lull its target into security (using Hypnosis) and not actually attack until it is asleep.

On the other hand, back one of them into a corner (physically or metaphorically, as it turns out), and they become rather nasty critters. They will change shape into whatever is handy and attacking with full fury and force.

It will wait until that last possible moment, though. The thing will typically act exactly “in character,” even to the point of joining hunts for itself and allowing itself to be detected, before striking.

Hmmm… A pale-skinned, shape-shifting alien with psychic powers and a vulnerability to energy attacks, particularly fire, who crashed in Antarctica…If transplantation into the DCU doesn’t turn him into a White Martian, I’d be very surprised.

Here, a small part of the creature would have survived, and turned the human encampment into Z’Onn Z’Orr. It either died in the intervening decades, or joined the Hyperclan when it made Earthfall.

As it turns out, by the way, John Ostrander  was planning to center J’Onn’s ability to fly around manipulating magnetic fields. This is not too far off how the spaceship apparently operated.

In fact, if I were trying to build a “Pulp Era JLA,” I would likely start by casting:

Despite the similarities to the DCU Martians, many of the “Wold Newton ” studies seem to like the idea that Doc Savage claimed the last sample of the creature, and brought it home for study. Main character McReady bears a great similarity to the Man of Bronze, and he does save the day.

Its nutrient gelatin was the vat into which “Eel” O’Brian fell when running from the police. The creature bonded with his body, giving him the shape-shifting and stretching powers he used to fight crime as Plastic Man.

Personally, I doubt it (though I like the Doc Savage connection). But if that’s what floats your boat, go for it. As long as you’re there, the creature can be slowly spreading through the world via Gingold, too.

In this scenario, the creature devoured and replaced a gingold tree. Ralph Dibny (all together now, “by the sort of coincidence only found in comic books”) is entirely wrong in his deduction as to how the “India Rubber Men” do what they do. Yet he happens to stumble on the ersatz gingold tree, and the creature enters Ralph’s system, giving him a limited ability to mold his body.

Of course, it’s only limited, because the creature has only replaced parts of Ralph. Though this may change over time…and won’t Sue ever be surprised…?

Bonuses and Limitations:
The score given for Artist/Actor is a maximum. In reality, it may use no more APs to mimic a person than RAPs were gained against that person via Mind Probe.

Connections:
Special: Since the creature can physically, mentally, and emotionally mimic any of its targets, it can claim each of their Connections.

Drawbacks:
Misc (The creature has an alien scent, giving a -1CS to OV/RV when being tracked by a skilled Earthling), Misc (Drops of blood will act as independant entities, giving its nature away, if an observer is sufficiently clever).

Source of Character: Who Goes There? by John W. Campbell. 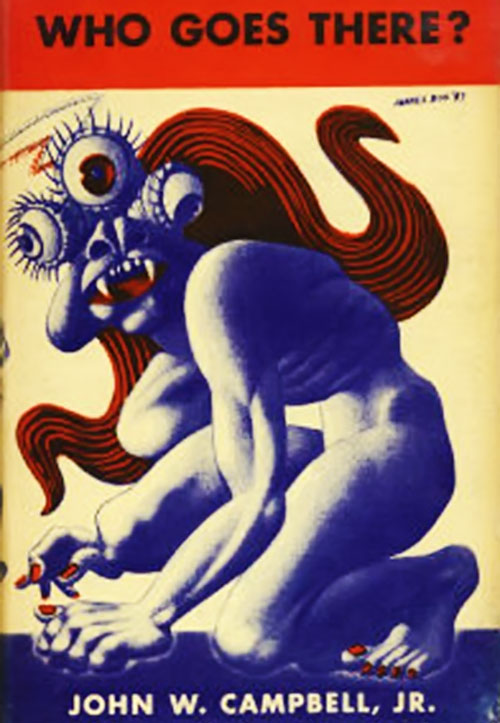