So yes, this is a profile for the Thing (Benjamin Grimm) of the Fantastic Four. However, this is specifically for the version featured in the Ultimate Comics imprint of Marvel, which depicted a separate version of Earth. This alternate reality existed from 2000 to 2015.

It wasn’t a bad attempt at modernising the F4 — certainly better than the Heroes Reborn one ! — though it eventually lost steam. For more context about this version of the team, we do suggest that you first read our Ultimate Fantastic Four team profile.

Ben’s strength limit is still unknown. But his arm strength has been measured in excess of seven tons per square inch, sufficient to tear through a 12-inch-thick steel door. His rock-like skin’s resistance is likewise not fully measured, but he is bulletproof, and has taken a bazooka in the chest at close range.

He has also proven capable of surviving in alien atmospheres such as Nihil’s toxically acidic environment.

Born prematurely to a single mother, Ben would have died at birth but for his stubbornness. He grew into a gifted athlete, and was regarded as a future football star as early as fourth grade. This is when he gained the nickname ’Grimm Reaper’ for his linebacking  skills.

At aged seven he befriended fellow student Reed Richards, protecting Reed from bullies. In turn, Reed helped Ben with his studies, tutoring him in math and science. Reed also shared his research with Ben, showing him devices built for accessing other dimensions. In fifth grade, Reed was moved uptown to a government research facility, and their communications became less frequent.

Finishing high school, Ben began college in the New York area. He’d remained in occasional contact with Reed over the years. Thus, when the time came for Reed to demonstrate his teleportation device, Ben was invited to observe. As the test was during Ben’s spring break, he travelled cross-country to the Nevada test site.

Ben watched the test beside Reed, Susan and Johnny Storm, and Victor Van Damme. The device malfunctioned and Ben awoke in Mexico City, transformed into a rocky, brutish Thing. He was taken to the Baxter Building by U.S. Government.

As the U.S. government wanted to keep the foursome a secret, Ben was confined to the Baxter Building for months after his change. He was limited to a weekly phone call to his mother. When the team went public he had more freedom, but took only limited advantage of it, being self-conscious of his appearance.

The most isolated of the four, he suffered the most change to his circumstances, his pro football dreams dead. While he took advantage of the team’s missions for something to do it was initially only a diversion. This changed as he started enjoying the adventures, getting to do things like space-walking in the N-Zone, and venturing into the Jurassic Era.

When Reed revealed Doom had been responsible for the Ultimatum event, and would inevitably be responsible for more such disasters, Ben realised he had to do what Reed couldn’t bring himself to. Travelling to Latveria, Ben executed Doom.

The team was already falling apart at that time, so Ben took up General Ross’ recent offer and became a test pilot for S.H.I.E.L.D..

Ben was frequently grumpy and gruff following his changes, and the limitations they’ve placed on him. Yet he still maintains a wide-eyed sense of wonder at some of the things he gets to do. He gets frustrated at having to be so careful, relishing the opportunities to let loose, and enjoys facing opponents against whom he doesn’t have to hold back. 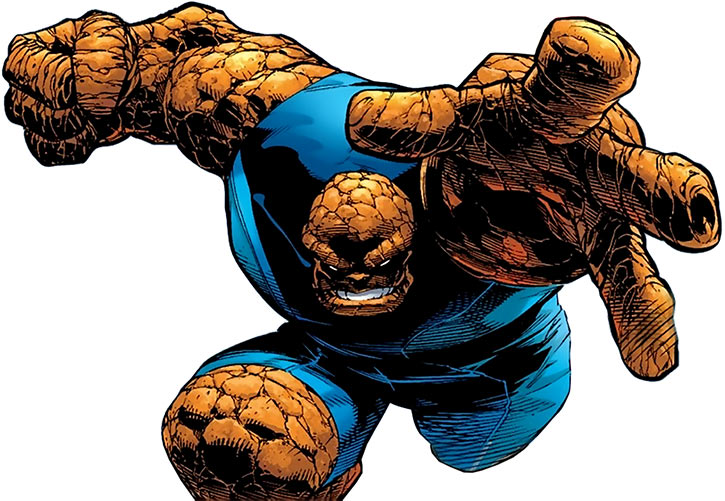 He does undergo periods of severe depression when he prefers to avoid others. These are often triggered by people reacting with horror at his appearance.

He’s remained friends with Reed, whom he doesn’t blame for the accident. He developed a big-brotherly sense of irritation with Johnny, but he’s unsure around Sue, due to her frequently running tests on him.

“Well, the way I see it, clearly, I’ve gone apeshit insane. Or I’m in a coma having some fantasy dream or something. So, guess I might as well be the hero in it.”

[On returning from 150 million years ago] “Dude, you would not believe what we just saw. It was exactly like Jurassic Park , except the dinosaurs were even better and it didn’t have those two kids you wanted to strangle.”

Thor: “Ever wrestled a fire demon from the volcanic depths of Muspelheim ?”
Ben: “Nope. Beat the snot out of an underground sea monster thing, though.”
Johnny: “Totally trashed it. And, y‘know, aliens.”
Ben: “Yeah. Loads of aliens.”
Thor: “Ha ! Trashing aliens is great ! Listen – we’ll let Nick Fury do his being-the-man bit, and then we’ll find beer. Yes ?”
Johnny: “Dude. Thor wants to get us beer.”
Ben: “Beer rocks.”

(This proposed variant is an original fictional take on the concept.)

If you want to play an alternate future of Ben Grimm. After Ben is injured he discovers a sensei that teaches him Yoga concentration exercises and stretching positions to heal his body. Ben discovers he can control his rocky form but very slowly. Fire is a dynamic element so Johnny can quickly change. Earth is a static element so Ben can change himself over months through concentration.

He also discovers an ultra slow version of regeneration that would allow him to heal anything that does not kill him outright, even dismemberment.

Zen Ben spends much of his time looking like a tall version of Michelangelo’s David , shaved bald. He is able to pass as normal at most distances. Zen Ben has become an advocate of measure twice/cut once philosophy. People who knew him before his inner discoveries find the change hard to deal with. He still drinks beer.

Ben Grimm struggled in his early teens with issues of identity. He wanted to be more than a big-dumb-guy. His early experiences with Reed Richards raised his expectations of life. Although not super powered he found himself inspired by the original Teen Titans and took to the streets of The Bronx and Brooklyn looking for ways to define himself as a hero. What he found was a bit more complicated.

During a two year stint he encountered Speedy during his heroine addict phase. Ben tried to help the other non-super-powered teen regain his heroic status as part of his own quest. Ben approached Wally West, whose identity Roy revealed while in a drug haze. He was harshly disappointed by the young speedster turning a blind eye to his friend’s state.

Ben sought out Dick Grayson as well but learned that there are some things to big and scary for even his prodigious physical size and formidable will.

In the weeks before Reed Richards fateful N-zone test Ben made contact with the quixotic Oliver Queen. Queen, also a non-super-powered hero inspired Ben in the inverse of the way that Wally West discouraged him. Queen lifted his foster son out of the slums of the South Bronx and explained to Ben about what true heroism was.

It was in the heart. Green Arrow told him being a hero meant being willing to look the bad things in life in the face and change them for the better. Even Superman or Thor would only be powered not heroic if they could walk past a strung out friend passed out on the street.

Sure of the meaning of his life for the first time Ben drove to meet his old friend Reed. He did not have a chance to tell him about the heroes he met before the N-zone device failed making him the Thing.

Recently the Thing had an encounter with the new flash, Bart, thinking him to be Wally West and blew up at him. This sparked an additional point of contention between the JL and Fury and Steel’s SHIELD forces. 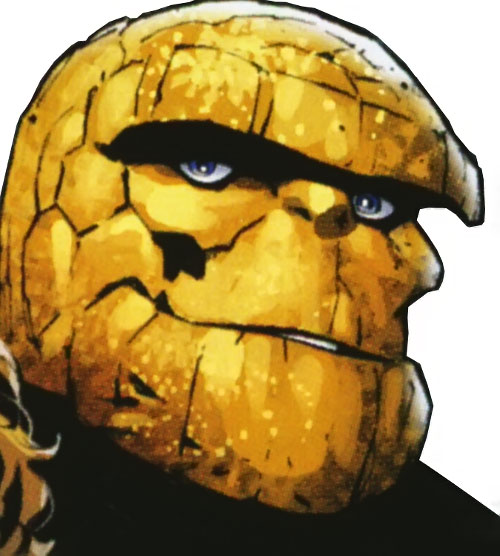 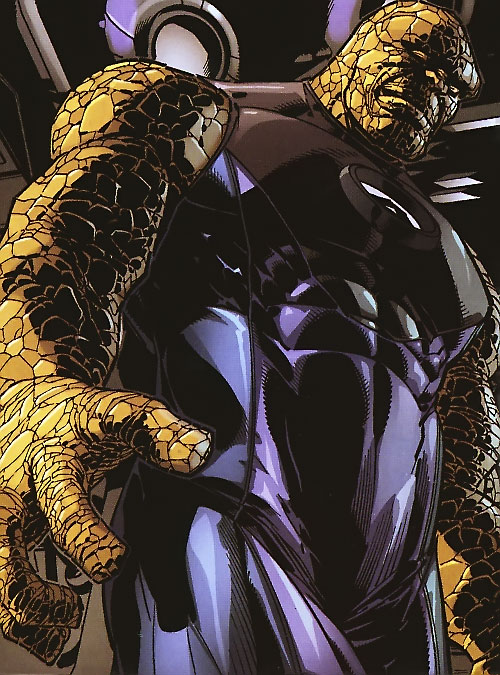 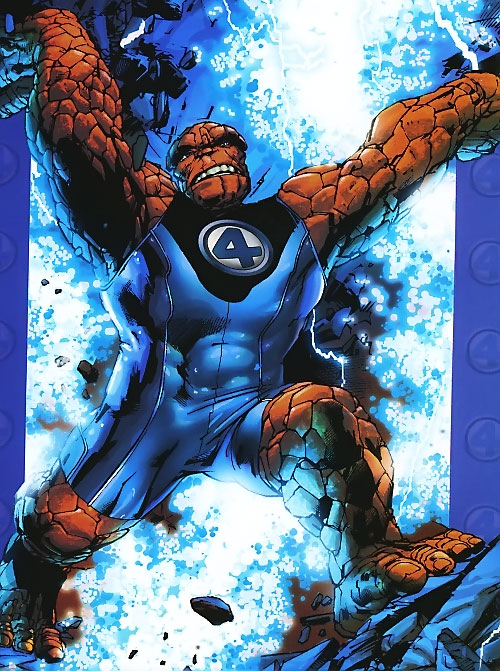 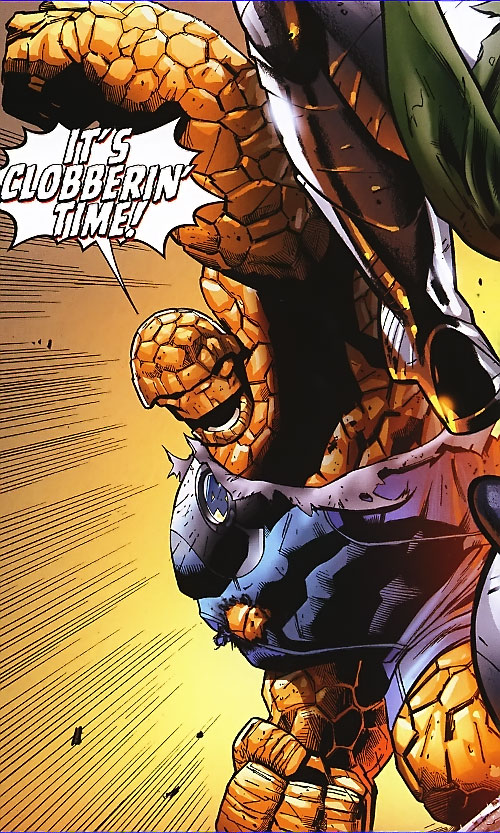 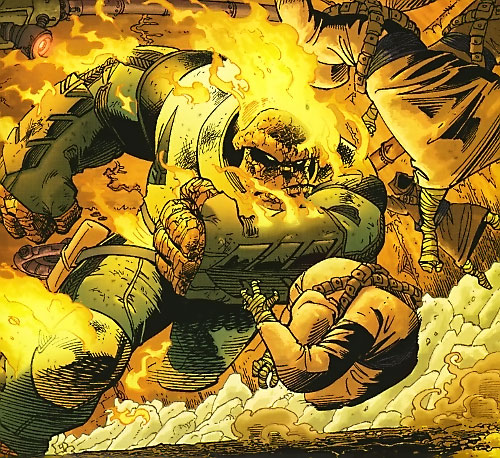 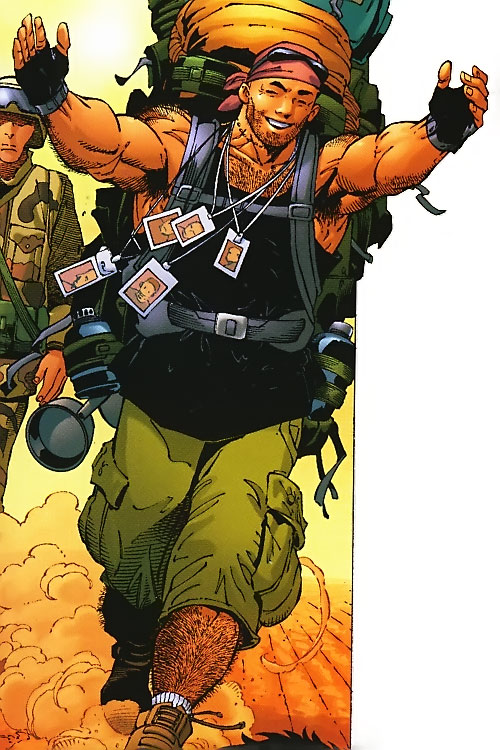