Third Rail was a major character in Milestone Comics’ Blood Syndicate. This book was part of the Milestone launch in 1993.

Third Rail has the ability to absorb kinetic or radiant energy he came in contact with (electricity, lasers, punches, etc.). He can then channel it into increased bodily mass.

This process will work even when the damage is severe enough to overload Third Rail’s absorption abilities. For example, when Icon struck him hard enough to knock him out, the unconscious Third Rail still gained significant mass from the energy of the punch.

Third Rail is a Bang Baby, a gang member who received superhuman powers in the wake of the Big Bang. The Big Bang was supposed to be a rumble between all of the major gangs of Paris Island to settle their turf wars, once and for all. The Dakota City Police Department learned of the impending showdown and developed a special tear gas that also contained a radioactive marker.

Their plan was to use the gas to break up the Big Bang. The cops would then trace the gang members down the next day by tracing the radioactive “tags.” Instead, most of those exposed to the tear gas died. And the handful of surviving gang members that lived had all developed superhuman abilities.

Third Rail’s father tried to stop him from attending the Big Bang. Unfortunately, not only did his father fail in this task, but was himself killed during the fighting.

Third Rail retreated to an underground warren in the abandoned Paris Island section of the Dakota City Subway System after the Big Bang. He was befriended by Dogg, who introduced him to Rolando Texador.

During his time with the Blood Syndicate Third Rail began a romantic relationship with Brickhouse. The two even left the gang for a while during a dispute over Wise Son’s leadership. But they returned not too much later.

In the wake of the original Syndicate’s disbanding, former Syndicate member-turned-criminal Holocaust began forming a new Blood Syndicate. This version was more sympathetic to his schemes. He recruited several villainous Bang Babies as well as some former members of the first Syndicate.

Holocaust then arranged a confrontation with Icon to remove that hero as an obstacle to his plans.

This became Holocaust’s ultimate undoing. Icon had brought Hardware, Static, and Rocket as backup. One of Holocaust’s new recruits was an undercover Federal agent. And all of the members of the previous Syndicate who had joined had only done so to uncover Holocaust’s plots and partners.

The conflagration consumed Holocaust, leaving naught but a skeleton behind, while leaving Wise Son unharmed. Having earned the Blood Syndicate’s respect anew, Wise Son took leadership of the reformed team. He made a promise to focus on fighting for justice.

One result of the Final Crisis series was the integration of the Milestone Universe into the mainstream DCU. The cataclysmic events therein destroyed the universe in which Milestone took place. But the powerful psychic Dharma was able to harness the power of Rift, the powerful being behind the original Milestone/DC crossover, to save his universe’s inhabitants.

This process was hindered by Starbreaker’s attempt to steal Dharma’s powers and is thus on-going — Dharma stated that it would be months, if not years, before it was complete (this was likely also a metatextual statement on the incorporation of the Milestone characters into DC Comics’ mainstream titles).

Third Rail is a Korean male of average size but well-defined build. When he has absorbed some energy, he begins to tower over most people and becomes more thickly built to boot.

He wears his hair in a flattop.

The shot with spandex pants, boots, wristbands and wide spandex suspenders, all in red is his original look. The others are the subsequent costume.

Third Rail is a natural counselor, keeping the peace and encouraging his fellow team members.

He acts as a center of calm in the storm of his friends’ turbulent emotions, particularly with his lover Brickhouse.

“Did you know I absorb energy ? Guess not, or you wouldn’t have hit me.”

The Big Bang and the Blood Syndicate can dropped into any urban area where gang activity plays a major role, in which case Third Rail will likely have Brickhouse by his side.

Third Rail could also be used as a medium-level metahuman whenever the GM needs a “brick”.

Advantages:
Area Knowledge (Paris Island), Expansive headquarters (The Factory, though the Blood Syndicate may have a new base of operations after its disbanding and subsequent reformation), Language (Korean). 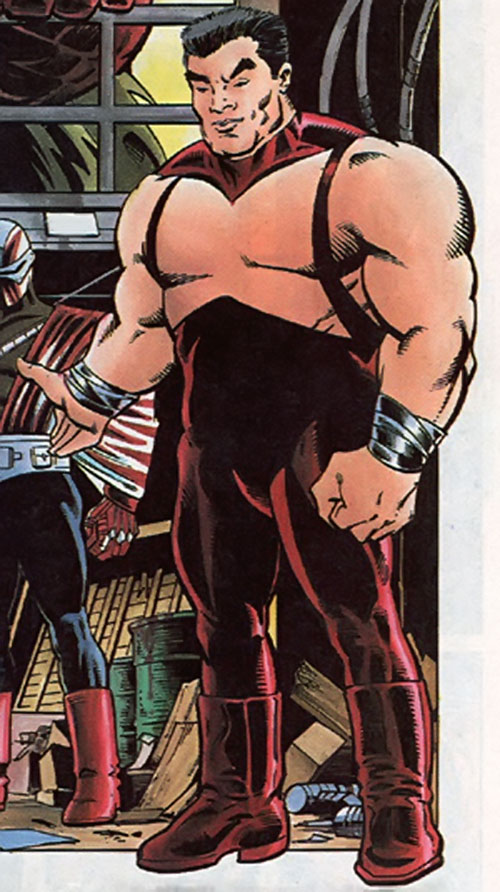