This version of Thor appeared in a Marvel-based movie in 1988, The Incredible Hulk Returns.

This film was a continuation of the popular Hulk TV series. If you are familiar with the Marvel Cinematic Universe of the XXIst century, this older movie was… not like that.

I know people make fun of this character (justifiably). He’s not exactly on the top of the list for great versions of Thor. But I thought he was fun and liked him. I thought that, visually, he was the best live action image of what the comic book Thor was originally drawn to look like.

Thor’s strength and durability are in that grey area. That is, it is superhuman by real world standards but possibly not by the standards of heroic fiction or comic books. His aging process may be much slower than a normal human’s.

This hammer is highly durable. Its main abilities are an electrical discharge and the ability to act as a conduit sending him to and from a Dream dimension.

The main Hulk vs. Thor 1988 confrontation in good quality.

Thor was a warrior and king who lived in the ancient past, at least a thousand years ago. He was the Son of Odin though it was probably by a mortal woman in this reality. He had many adventuring companions and led a carefree life of battle and “wenching”. 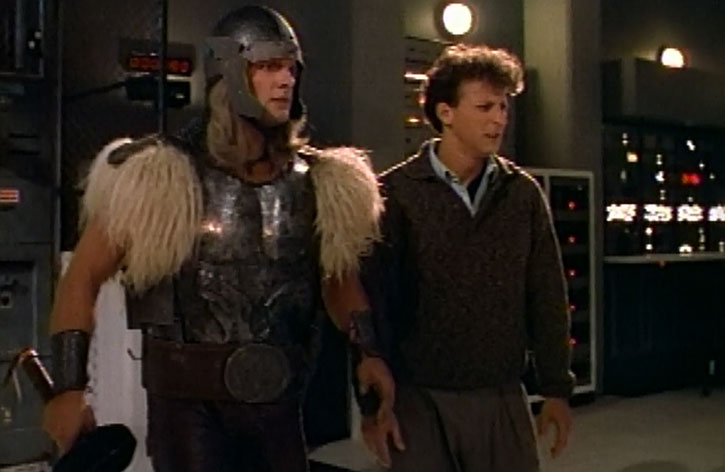 But he was arrogant and irresponsible. Although his father had given him the gift of a magical hammer that crackled with electricity when it struck, he would not allow his son to enter Valhalla. Instead, he sent him to a realm of mist and shadow where he remained disembodied for centuries until he learned humility or was ready to learn it.

That time came in the late 1980s when a young medical doctor, Donald Blake, felt compelled to join an archaeological expedition into “the frozen lands of the savage Norsemen” as a physician. High in the snow-covered mountains, as they camped one night, Blake felt an urge to climb higher and into a frozen cave.

Near the entrance was a warning carved in Viking runes. Blake always had a strange affinity for Viking culture and Norse Myth even though he personally seemed the antithesis of such things, small and meek. Now he found he could even read the Norse writing. It warned to go back or go forward and be eaten by your fate. He went forward.

There he found a sarcophagus. Prying it open, he found the armored skeletal remains of a man, a big man. By his side lay a Viking War hammer. As Blake touched the hammer, he saw it crackle with lightning and, where the eyes of the man would have been, there was glowing. There was an explosion of lightning and he saw a man materializing. 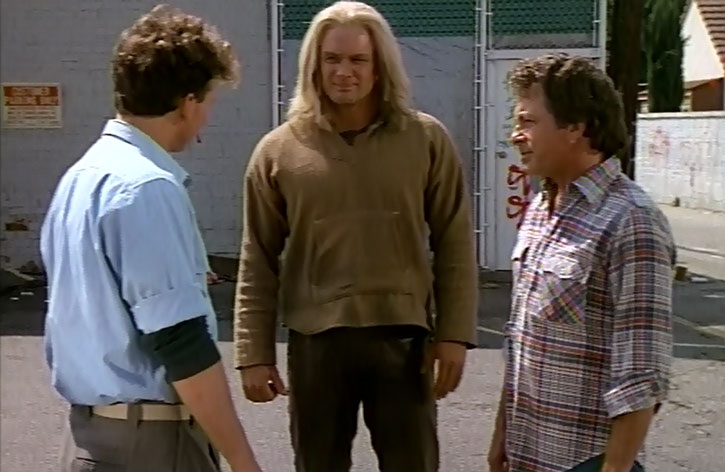 Thor was overjoyed. After countless years, he was free. Or was he? It was Odin’s decree that he must allow this Don Blake to be his guide in this new world. Nor did Blake want him around all the time.

By taking the hammer and concentrating while invoking Odin’s name, Blake could send him back to the mist realm he had been trapped in for so long. He could as easily bring Thor back to Earth.

As they traveled, Thor seemed more the guide than Blake. He wanted to stay on Earth all the time, of course. He also wanted to go out and smash evildoers and right wrongs. But Blake was more interested in the big picture.

But he did not know who to ask until, in one city, he walked by a man and recognized his old professor, Dr. David Banner, who was supposedly dead.

Blake got into the building where David worked one night and interrupted an experiment. He told David the story of what happened to him and then decided to prove it by summoning Thor. Unfortunately, the experiment Don interrupted would have been a cure for David.

Instead, when Thor appeared, he feared that David was some sort of sorcerer. If so, he might find a way to break the bond Odin had weaved between himself and Blake. If that happened, Thor would lose his chance to be redeemed and enter Valhalla.

He started threatening David. That triggered the transformation to the Creature — the Hulk — or, as Thor called him, the Troll. They battled, the Hulk definitely getting the best of it. Then the Hulk leaped down from the building they were in and ran off.

It was the next morning before Thor and Don found David. Thor bragged that his nose was a gift from Odin. Once he had gotten someone’s scent, he could track them anywhere.

Chatting with the magic man

Don was volunteered to help David do repairs on the equipment damaged during Thor’s fight with “the Troll.” David then suggested that if Don really had wanted the answers, he would talk to Thor. 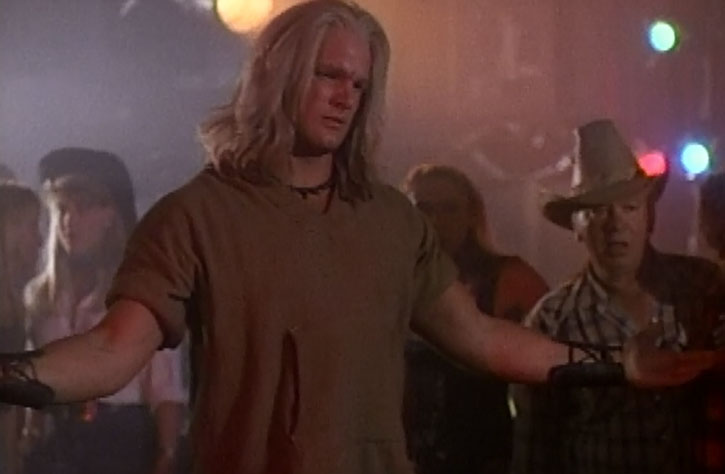 Don summoned Thor and demanded his answers but Thor, serious for once, told Blake that he had just spent countless centuries in a timeless mist where he had no body, no blood nor veins nor the heart to pump the blood, able to see but with only mist to see, to hear but nothing there to hear.

Then after what seemed forever, he appeared on Earth again. He understood somehow that Odin was giving him his chance and then he stood in the cave with Blake.

Blake had made his way back to the United States by himself except with the hammer that he kept a secret from the expedition. Along the way, Thor showed up to right wrongs until they had made their way back to the states and to Banner.

Blake having realized the torments Thor had endured gave him what he wanted, the company of beautiful and somewhat “free” women and of men like himself. In other words, they went to a biker bar. There, Thor proved he could drink then all under the table, was virtually impervious to their punches and could knock a strong man out with a backhand that amounted to little more than a flick of his wrist.

Having bonded, Blake headed for David’s fiancée’s house to see him. When he pulled up, mercenaries were attacking with the intent of kidnapping David or his girlfriend. Blake immediately summoned Thor though it is never explained why, having bonded and become friends, Blake would keep sending him back to such a horrible place.

Unfortunately, even the combined might of Thor and the Hulk was not able to prevent the mercenaries escaping with David’s fiancée. 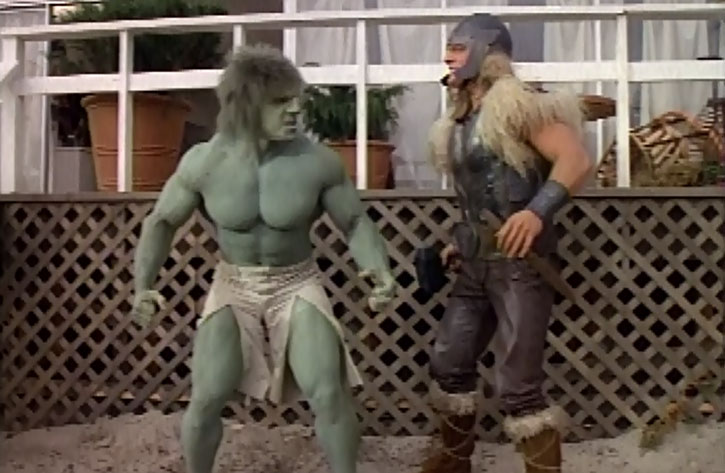 However, David was able to discover where she was being held and went there with Don and Thor. Thor’s plan was simple. He would attack from the one direction while Don and David attacked from the other. He meant after David turned into the Green Troll, of course.

With their mission completed, Thor and Blake knew it was time to move on, having made a peace of sorts with each other.

Thor is a tall and powerfully built man with long blond hair. Always smiling, he is usually clad in armor including a Viking helmet. He carries a knife in a sheathe at his belt at the left side though he only seems to use it for opening beer cans since he has not quite figured out the purpose of those tabs on the top.

He carries his hammer by a leather thong on the right side of the belt.

Though having a short temper, Thor usually regrets losing it if it turns out not to have been justified. Most of the time, he is friendly and just wants to have fun.

“Do you know what it is like to be without flesh, Blake ? Without flesh that you can feel, without blood pumping through your limbs, with no heart and no chest to hold it ? And still, at the same time, to be awake. Not sleeping, not dead, not anything. A place of mist and smoke, darkness, alone, as if in some terrible dream. And then, then, Blake, to hear the call, like a war horn in battle. And then, to awaken as you were when men and women ate life with shining teeth. None of them are left now. But I am what I always will be and I need to eat, drink, laugh with a woman, fight with a man. Just a taste, Blake, and then, then, you can ask questions until Odin’s missing eye returns.”

“How ? Why ? How am I here, now ? Odin made you my guide in this place and, for humility’s sake, I must follow your lead. Well, then, lead.” 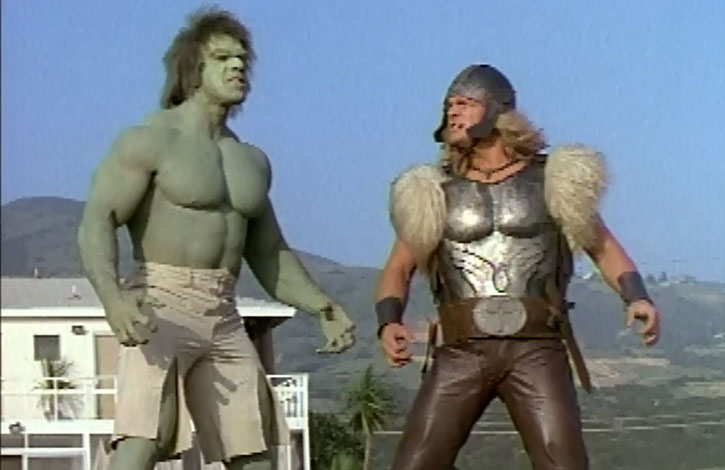 Thor: “What we’ll do is attack them, singing to Odin for a warrior’s death. Then we’ll squash the cowardly dogs that would wage war on a woman. Don’t worry, Banner. Your woman will come to no harm. I, Thor, Son of Odin, swear it to you.”

Thor: “That shower bath is a miracle. Water from nowhere. Wonderful. Hot and cold. All you could want. I’m telling you, the eyes would pop from my old comrades’ heads if they could see what I’m seeing in this god-forsaken world of yours.”

Given a powerup, the best place I can see to place this version of Thor would be in the Justice League immediately after the Crisis on Infinite Earths. This was a time when the Justice League was – how can I put this politely? – a series of comedy skits. The Thor of this movie would fit right in there.

Bonuses and Limitations:
Invulnerability requires that he mystically transform to energy and be pulled into the hammer for at least 1 AP of time though distance between himself and the hammer is not an issue (FC -1).

Equipment:
Hammer [BODY 12, EV 05 (06 w/STR, 07 w/Martial Artist, hammer head flares with electricity when striking bringing damage to 08), Bonus: The Hammer is the conduit that allows Thor to be summoned from whatever Dream dimension he exists in as a disembodied spirit and to banish him back to it. However, Thor has no control over this. The Hammer must be held by Odin’s chosen guide for Thor, Donald Blake in this case, for Thor to be summoned from that dimension or banished back to it.]

I did not include the phenomenon where he turns to electricity and vanishes or reappears because he has no control over it.

However, his Invulnerability has a delayed effect, even a “Resurrection” effect, if damage kills him. Once pulled into the other reality of mist where he has no body, he can be summoned back as long as his Invulnerability is enough to save him. This was not explicitly stated in the movie but is a reasonable assumption.

Near-Immortal was a judgment call. It is probably true that nobody would age in the mystical realm he is confined in when he is not on Earth.

The Connection to Matt Murdock is completely made up by me. After the death of David Banner, Thor and Daredevil become the only two super heroes in that world that we know for sure exist though I do a bit with an alternate history.

Source of Character: The made for television movie The Incredible Hulk Returns written by Nicholas Corea with Eric Kramer as Thor and Steve Levitt as Dr. Donald Blake. 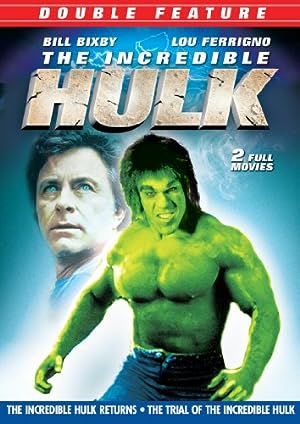 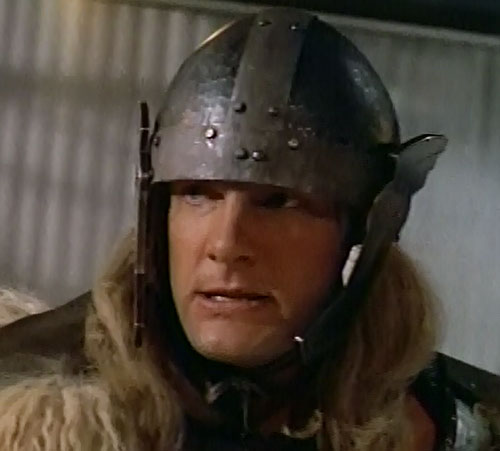 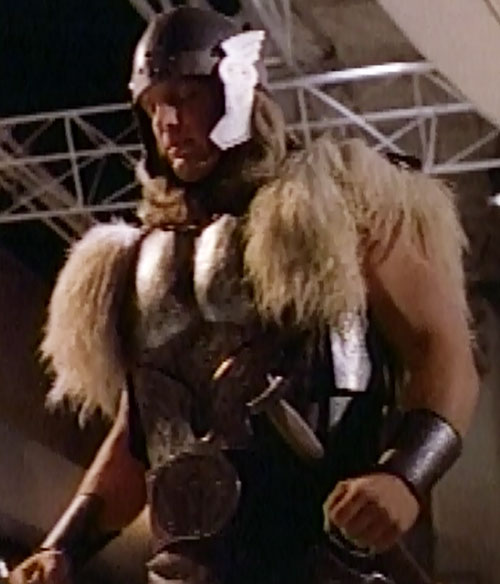 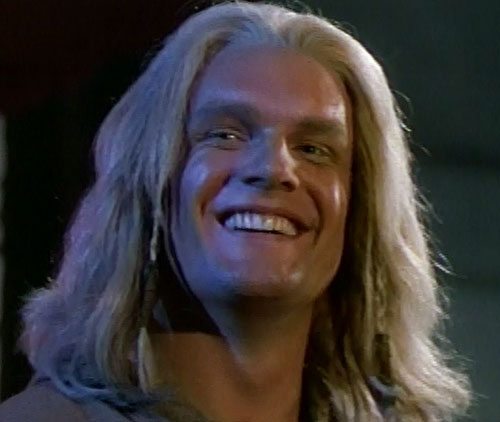 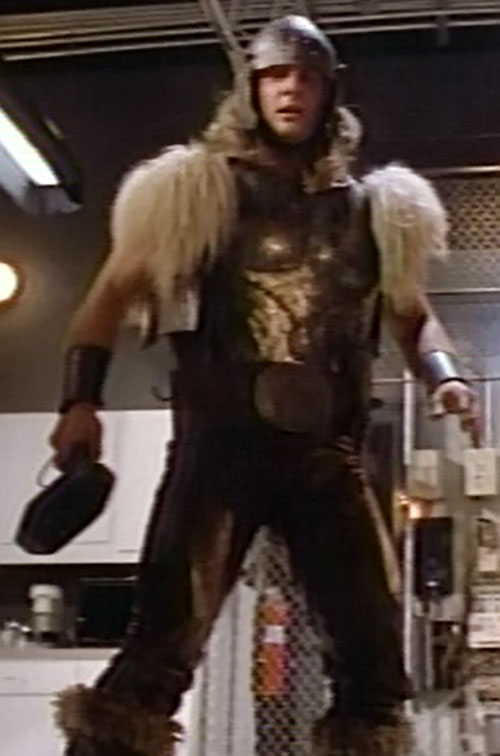 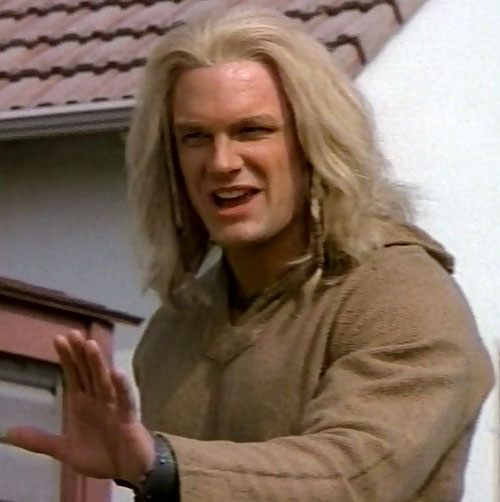 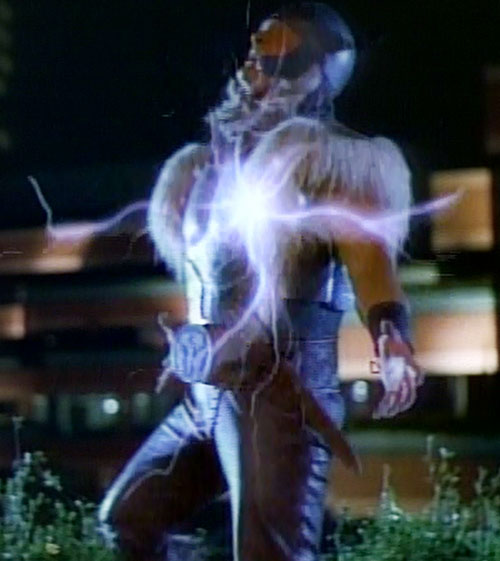 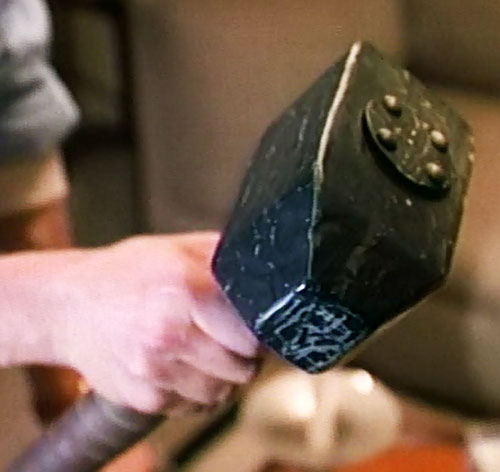 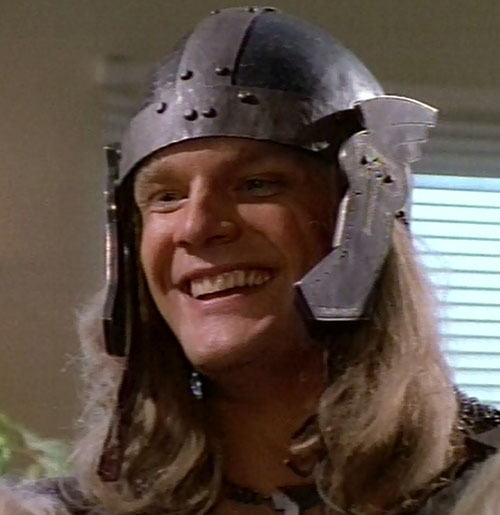 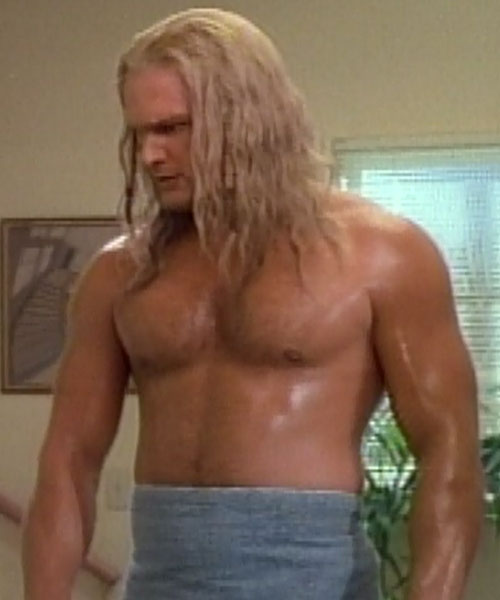 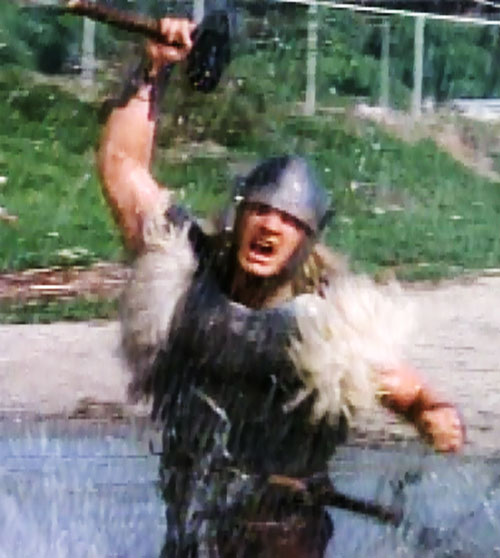