“The year 1994: From out of space comes a runaway planet, hurtling between the Earth and the Moon, unleashing cosmic destruction. Man’s civilization is cast in ruin. Two thousand years later, Earth is reborn… A strange new world rises from the old: a world of savagery, super science, and sorcery. But one man bursts his bonds to fight for justice ! With his companions Ookla the Mok and Princess Ariel, he pits his strength, his courage, and his fabulous Sunsword against the forces of evil. He is Thundarr, the Barbarian !”

Thundarr the Barbarian as a 1980-1982 Saturday morning cartoon on US TV. As the quotes above helpfully recaps, it takes place in a post-apocalyptic far future. After an errant comet/planet nearly collided with Earth the world has been devastated, the Moon was broken, and it became possible to practice magic.

The cartoon mixes a lot of comic book tropes of that day, as many of the people creating it came from comics (Steve Gerber, Jack Kirby and Alex Toth having played the largest roles).

Some stuff was also thrown in by producers who saw how the kids loved the then-recent Star Wars, so the hero is accompanied by a sort of Wookie and has a quasi-lightsabre. Thundarr did come before He-Man of the Masters of the Universe, albeit not by much.

Though it had but 21 episodes, Thundarr had a notable impact on young Gen-Xers and retains significant nostalgia value.

Thundarr is a barbarian of near super-human strength. He enters hand-to-hand or melee combat with multiple opponents on a regular basis.

Thundarr’s courage is indomitable. He has never met a creature or a challenge that could un-nerve him.

In his fight against the oppression of the wizards he wields the Sunsword. This is a powerful artifact able to slice through steel like it was butter. Thundarr uses the Sunsword to deflect incoming energy attacks, he has even deflected area-effect blasts like dragon’s breath, more than once.

The Sunsword may only be used by the one who recharges it in the Pool of Power. If someone else holds the Sunsword its blade will not extend.

Many times, when Thundarr has come across old technology he has been able to guess correctly about what to do with them. For instance, he has stopped a train by guessing what he needed to do to apply the brakes. More impressively, he has flown a helicopter and operated a dune-buggy without ever seeing these machines before in his life. 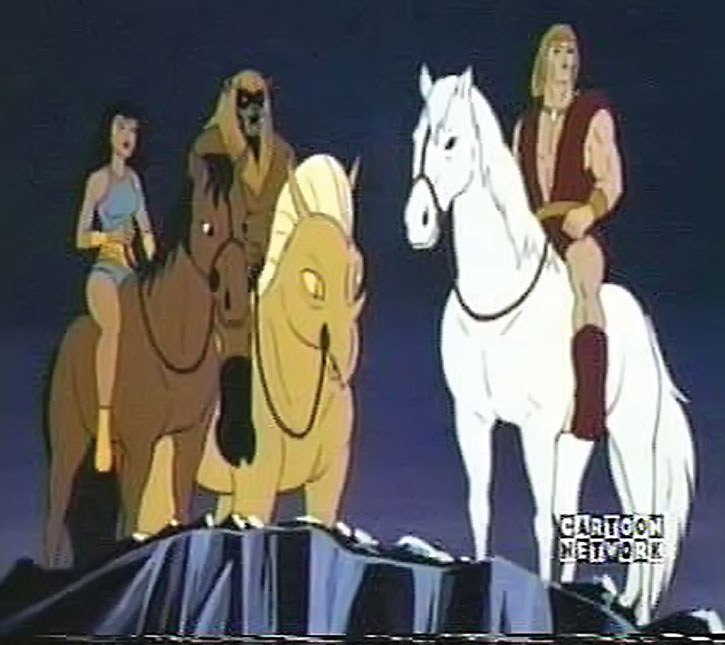 Thundarr has trained his horse as well as Ariel’s horse and Ookla’s Equort to come when he whistles. He can get his horse to run for many hours or days without stopping and perform jumps (even leaping over angry men swinging metal pipes over their heads or onto moving ships).

Thundarr can coax his horse to run into perilous situations and rear up on it’s hind legs. He may also mount his horse on the run. Thundarr doesn’t have the Pet advantage.

Thundarr is the leader of a trio of heroes consisting of himself, the young sorceress Ariel and Ookla the Mok. They travel the post-apocalyptic Earth on horseback fighting the oppressive tyranny of wizards.

The Earth”s surviving humans are no longer the dominant species. They thus live out their lives in a constant struggle for survival. Magic and super-science have changed the world. The Earth is now home to mutants, giant creatures, robotic constructs, and of course wizards. 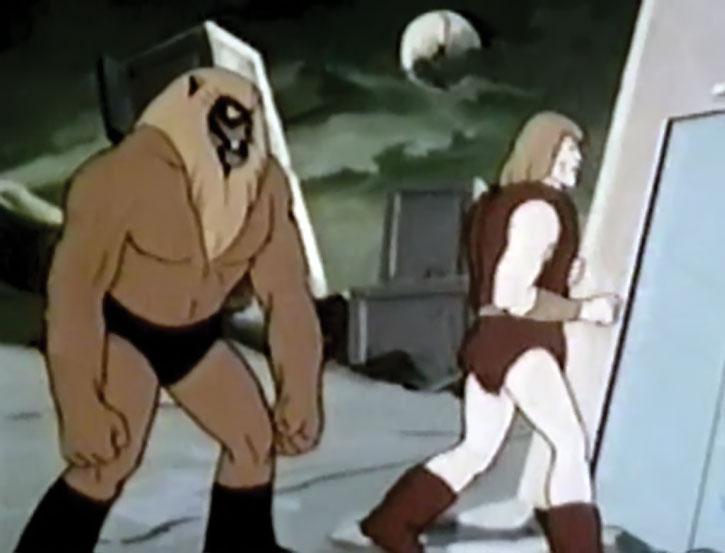 Thundarr’s past is a mystery. What we do know is he was held prisoner by a wizard. This is the very thing that made Thundarr who he is today; a man on a mission.

After breaking free, he joined up with Ariel and Ookla perhaps during his escape, perhaps afterwards. But the three are inseparable.

Thundarr is a young man perhaps in his late 20’s or early 30’s with shoulder length hair. He wears a fur vest and shorts as well as moccassins, all are brown in color. On his wrists are yellow bracers, on his left bracer rests the Sunsword.

Thundarr makes gut decisions. He will not hesitate to come to the defense of his friends. His distrust for wizards is a key motivation in Thundarr’s decision-making process. In Thundarr’s world the wizards oppress the remaining humans, so over time, Thundarr has built a deep resentment for them.

Thundarr is stubborn and tends to act without thinking (that’s an understatement). But he’s basically a good person who wants to make the world a better place.

Thundarr is demeaning towards women and cowards. He has no stomach for braggarts either.

Thundarr lives in a post-apocalyptic Earth and would have a hard time adapting to our time. He, Ookla, and Ariel once traveled to the past and back again. They’ve also met scientist from our time. It would not be unreasonable to think it could happen again.

Another thought would be to put Thundarr in Jonah Hex’s futuristic timeline.

Thundarr and crew would definitely oppose the Sorcerer Kings of Athas in the D&D Darksun Campaign setting.

Thundarr is inspired by R.E. Howard’s Conan the Barbarian and Han Solo from the Star Wars films. Thundarr has an analagous sidekick in Ookla to Han’s Chewbacca. He also has the princess to protect in Ariel. Furthermore, he is a rebel fighting the powers that be.

Further Star Wars influences can be seen in Thundarr’s weapon of choice, the “Sun Sword”, which projects a blade-like beam of energy when activated, and can be deactivated so that it is only a hilt.

In the earliest episodes there was good reason to give Thundarr the Jumping power with the Catfall Bonus, Only Useable With the Catfall Bonus. Thundarr could fall from ANY height without worry and land on his feet or on the back of his horse. The farthest jump being from a rocket headed for outerspace. He and his companions leapt from it on horseback and landed in the ocean unhurt.

In later episodes Thundarr is more concerned when falling and takes measures to save himself.

When looking at Thundarr’s incredible ability to leap from any height without harm, I came to the Jumping AP value of 08 because 07 is maximum falling AP value within Earth’s atmosphere. If GM’s want to incorporate this they should add it but I don’t think it was the intention of the writers at the time, so it’s not included in this writeup.

Thundar’s Superior Blocking primarily reflects his expertise with the Sunsword; however, he can block effectively with any suitably durable object, such as a car door or a copper American penny grown to gargantuan size. His Extraordinary Effort reflects his frankly obscene physical feats. Second Chance (Tumbling) allows him to reliably fall from almost any height.

Thanks to his Beginner’s Luck, he can, in a pinch, fly a helicopter, sabotage complex machinery, or even (in truly desperate circumstances) persuade others to help him.

Thundarr has an Expertise in identifying cowards and their characteristics. For instance, he knows that the death machines of cowards are of no use against him, is able to identify cowardly uses of sorcery, etc. 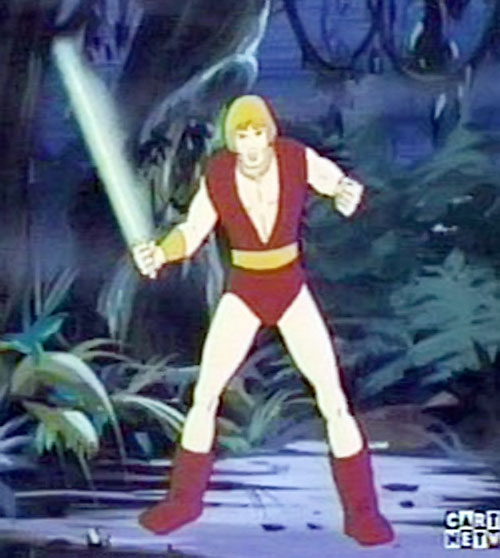 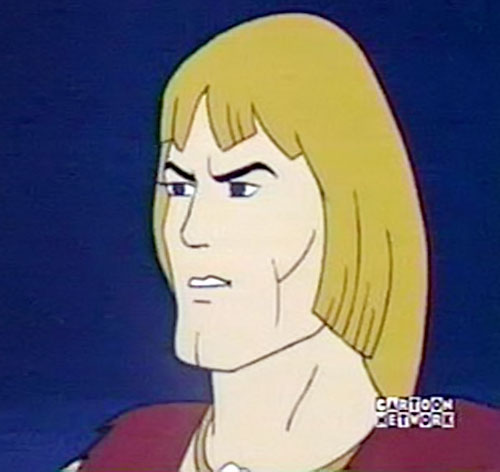 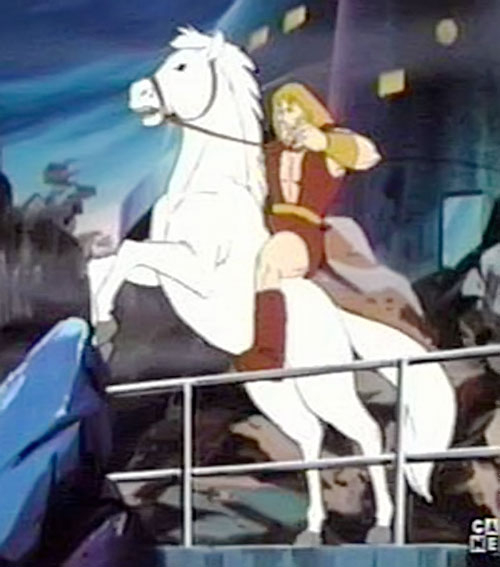 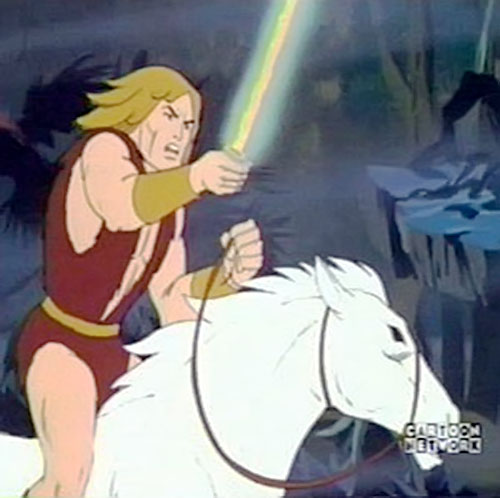 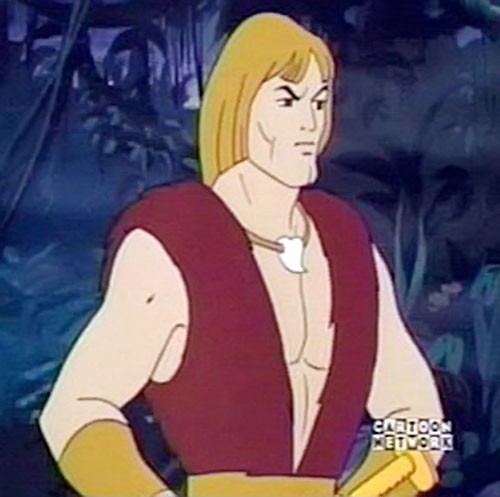 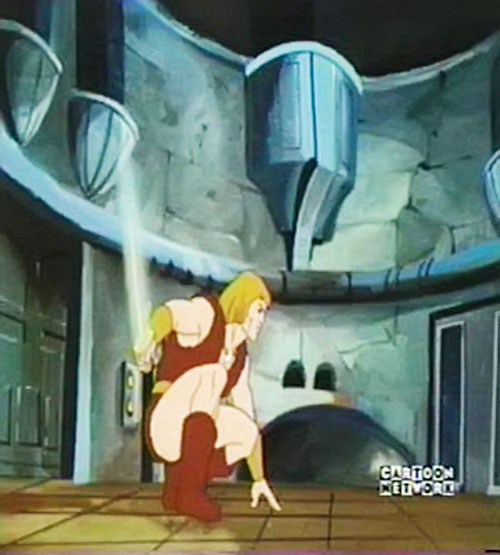 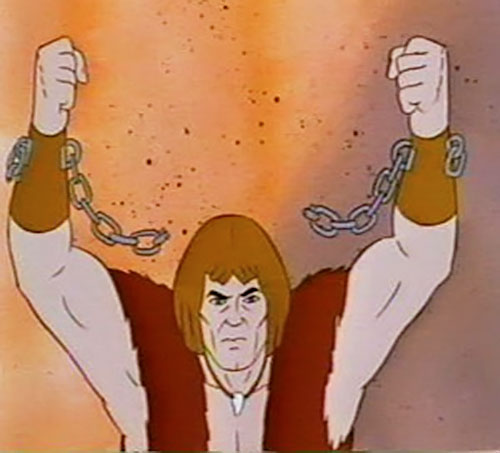 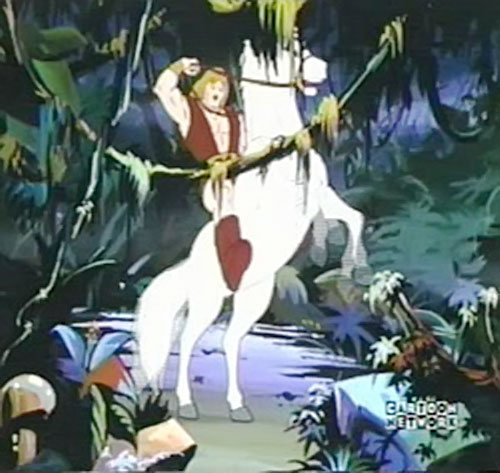 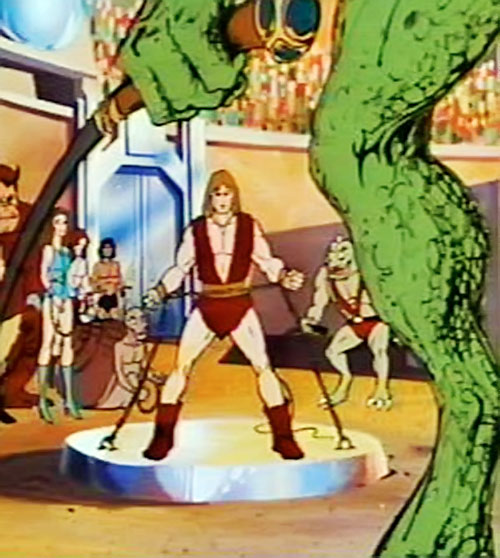 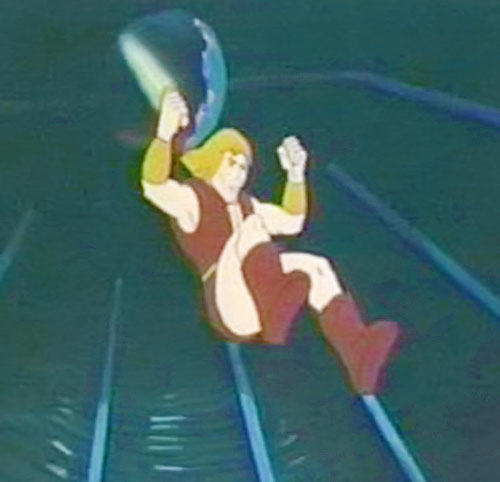 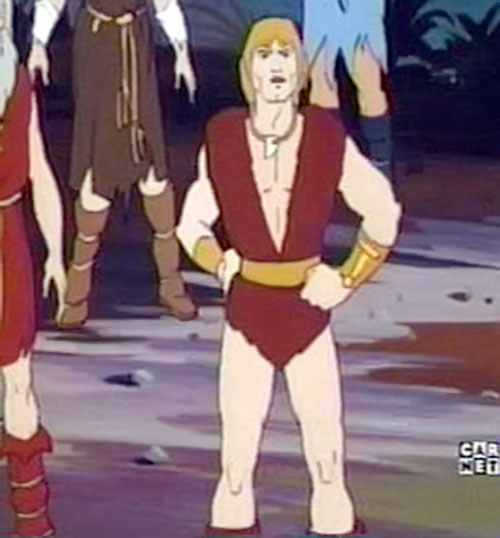 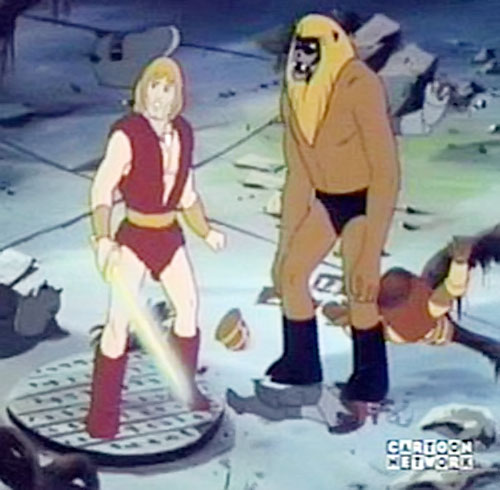