Like his brother, James benefits from a mutation that continuously enhances his musculature, strength, swiftness, size and senses.

Though it is hard to tell from the material, it is likely that his abilities kept improving during his time as a Hellion. Starting at the level of a physically active 14-year-old-or-so but eventually becoming superhuman.

The game stats are a snapshot of his abilities by Uncanny X-Men #193. At this point he’s very sharp and fast, enough of a hand-to-hand fighter to go against Wolverine (James Howlett), and strong enough to lift at least two tons (conservative estimate).

If featuring a younger Proudstar, lower his strength, Hero Points , etc. to approach human levels as his age approaches 14.

Conversely, if featuring James after Uncanny X-Men #193 he will have a higher DEX and BODY, and probably a higher STR. His mutation must have continued to grow at a steady pace, given the strength demonstrated after he leaves the Hellions and join X-Force.

James grew up in the rough-and-tumble Proudstar household, on the Camp Verde reservation (Arizona). His grandfather was fixated on the values of the true Apache warrior, and raised his sons and grandsons in this way.

Despite the old man’s misgiving about Apaches being commanded by White men, both his son Neal and his grandson John served with the US military in Việt Nam. Neal served under then-lieutenant “Thunderbolt” Ross. Years later, John was with the USMC.

Neither John nor James knew at the time that their mother had been exposed to fallout from government nuclear tests before their birth. But they both were mutants. Both men’s powers emerged after puberty, slowly strengthening their musculature. 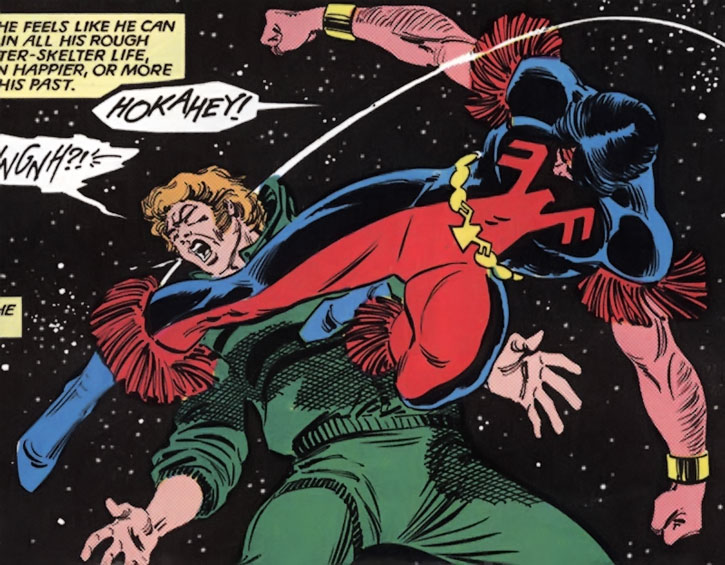 As a boy, James witnessed John’s first clear demonstration of superhuman might. John wrestled an escaped tiger to the ground to protect his little brother. However, another consequence of the nuclear fallout would soon become apparent, as Mrs. Proudstar was diagnosed with a cancer.

This attracted the attention of Michael Whitecloud. He was a res journalist investigating the abnormally high cancer rate in Camp Verde. James shadowed John and Michael as they defeated a plot by a mutant doctor studying and manipulating the cancer patients within the res.

In the wake of this victory Mrs. Proudstar was examined by another doctor. He determined that her “cancer” had been been a deliberately wrong diagnosis to manipulate her.

My brother, that hero

In 1975, John Proudstar met with Professor Charles Xavier. He agreed to join the X-Men, under the code name Thunderbird. However, he died during one of his very first missions.

This loss shocked James, who had always been very close to his brother. When John’s body was shipped back to the res, James stole it. He took it to the mountain to give John a proper Apache warrior burial.

The youngest Proudstar then swore that he would avenge his brother by killing “that devil Xavier, with his honeyed words and false promises.”

He took the code name Thunderbird and vied with Jetstream for the leadership, which he won. 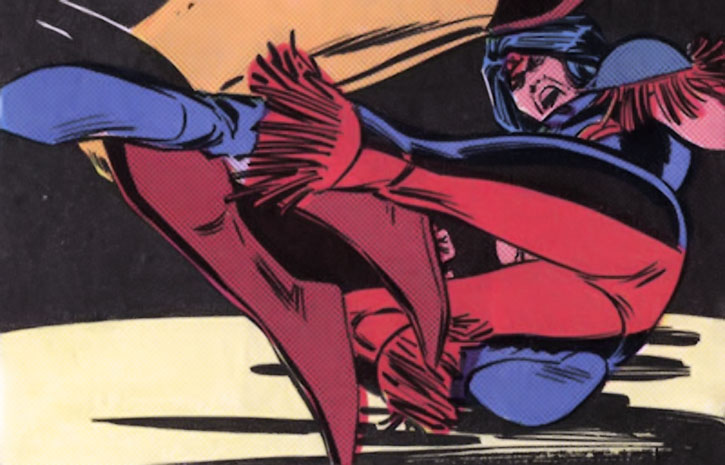 By 1985 James felt ready for his revenge. He donned a replica of his brother’s costume and went to Muir Island, where he ambushed and captured former X-Man Banshee (Sean Cassidy).

Proudstar sent an ultimatum to the X-Men, telling them to recover Banshee where John had died. Namely the NORAD site at Mount Cheyenne, in the Rocky Mountains.

However, fellow Hellion Empath learned about Thunderbird’s plan, and decided to liven things up a bit. He took with him another mayhem-loving Hellion, Roulette, then emotionally manipulated Firestar into joining him.

Empath and Roulette found the ailing Xavier first and took him down.

Meanwhile, Thunderbird was fighting the X-Men. He fared well thanks to tactical blunders from their brand-new leader Nightcrawler. Using gas, Proudstar even took out Wolverine and Shadowcat as they freed Banshee.

However, as he stood over his unconscious foes, he came to realise he was unable to kill them, which he interpreted as cowardice on his part.

Due to Empath’s interference, the situation turned into a disaster. The military attempted to kill the X-Men, and Firestar left the Hellions.

Meanwhile, ashamed by his inability to kill, James went straight for Xavier. Empath and Roulette had temporarily deprived the professor of his telepathic abilities. But Proudstar realised that he couldn’t murder the powerless Xavier.

Xavier talked to James, telling him how John Proudstar had chosen to die. He also reassured him that being unable to slaughter defenceless persons did not mean that he was a coward. The two made peace and T-Bird returned to the Massachusetts Academy.

Now more at peace with the legacy of his brother, James left the Hellions circa 1989. He returned to the Camp Verde reservation. Frost put pressure — verging on threats — on him to come back, but did not take action. 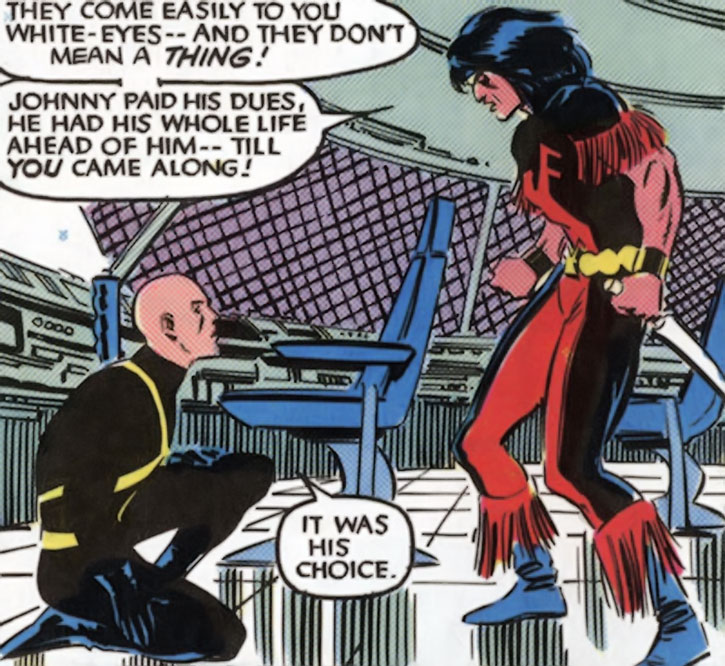 In 1991 Proudstar was contacted by mutant time traveller Cable, who talked about his project to create a mutant cadre fighting for the greater good. The Apache agreed to consider Cable’s offer. However, when he drove back to the res, he discovered that the population had been massacred.

Finding a Hellfire Club mask in the ruins, James wrongly concluded that it was payback from the White Queen. In anger, he agreed to join Cable’s unit immediately. As a X-Force member, Proudstar was code-named Warpath.

(The period that immediately follows isn’t covered yet, but we have a Proudstar writeup for the part of his X-Force career that came later).

James’ size and musculature increased during this entire era.

During social events he went for a sort of neo-tribal chic. Not unlike what Danielle Moonstar wore.

At the start of his Hellions career, James was a brash and macho young man. However, he also was unusually mature for a teenager. Like John, he was mostly a good man, putting him at odds with the more toxic members of the Hellions.

Also like his brother, he was competitive and felt a need to prove himself as a warrior and a man.

As he grew up, Thunderbird affirmed himself as a good leader – charismatic, intelligent, responsible, wise and with a sense of gravitas despite his youth. He had something of the “noble Indian warrior chief” archetype, and was steadily evolving toward the Responsibility mindset.

Though his use of a Lakota war cry (see the quotes) may have been a research failure on the writers’ part, it might also indicate that James is a “one tribe” sort of guy.

James was attracted toward Mirage (Danielle Moonstar), but nothing materialised.

“Your pardon, ma’am, but I don’t much like the idea of fighting kids. I want the X-Men. They owe me for my brother’s life.”

(Hollering a warcry) “Hokahey !”
Writeups.org note — “Hoka Hey” (“Good time to die !”) is actually a Lakota war cry, which an Apache man would be less likely to employ.

(Wolverine and Thunderbird are fighting)
Wolverine: “Oho, nice move, bub.”
Thunderbird: “And here, white eyes, is a nicer one !”(SHPOW !)

“You try anything, White man, I’ll gut you. This is my brother’s knife, he taught me how to use it.”

“Peace, Mirage. This is a party, let’s not scrape.”

Running and Martial Artist are here chiefly as markers, and predecessors for later growth. He gets Initiative and Techniques from Martial Artist, though, and could Push his Running if needed.

The enhanced senses are not apparent at this stage, but his INT was slightly highballed to represent sharp perception. 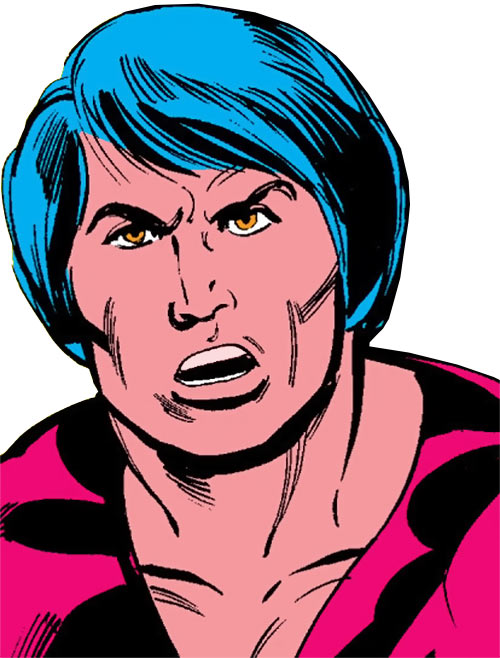 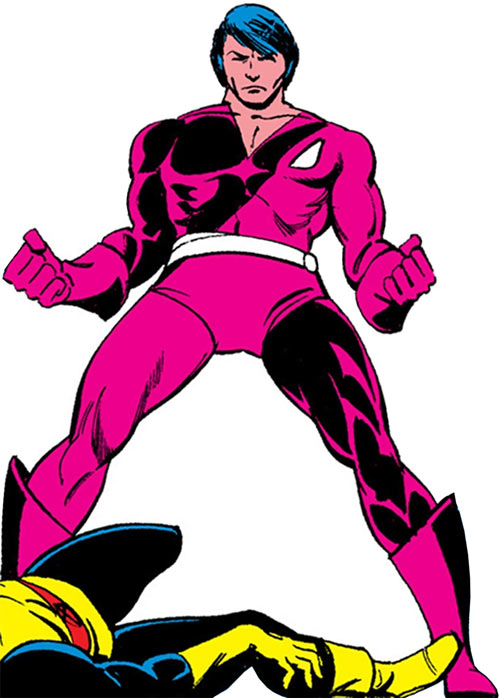 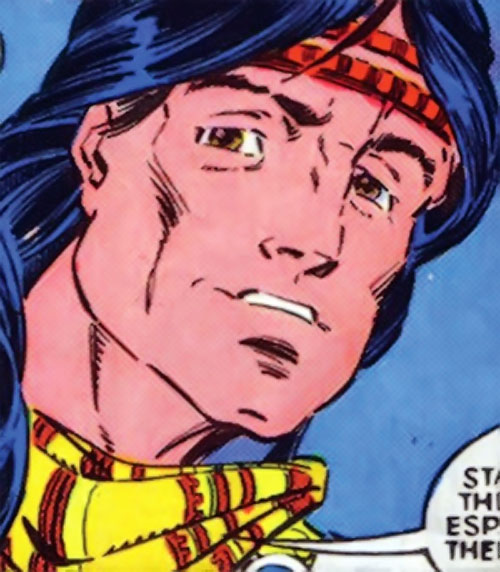 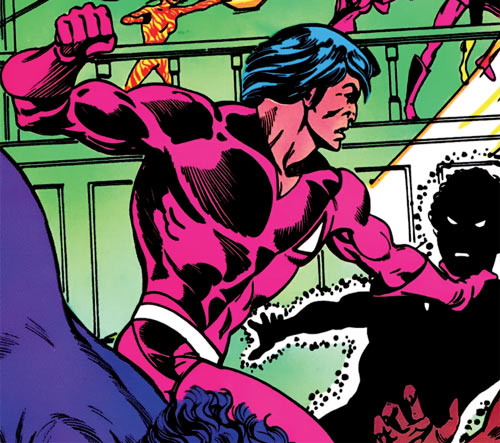 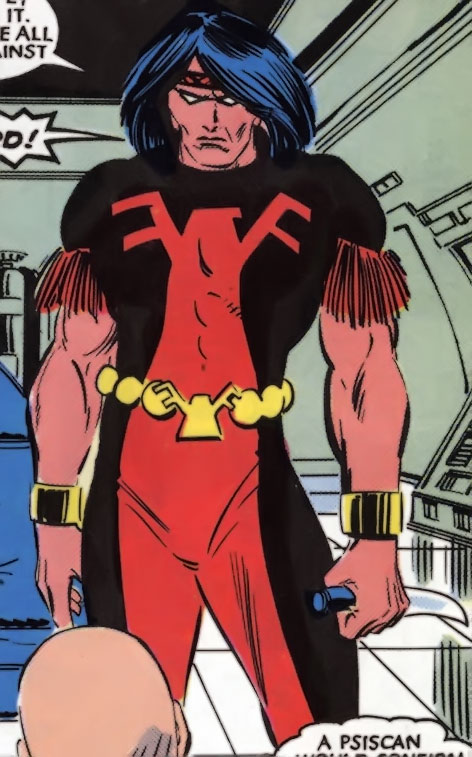