When we first met him, Thunderbird kept in shape by racing wild bison and wrestling them to the ground.

Thunderbird was a mutant who possessed superhuman strength and endurance, as well as extremely high coordination, senses and reflexes. His muscle tissue was three times as dense as that of a normal human being’s and was distributed in such a way as to give Thunderbird massive shoulders, arms, and thighs.

His skin was several times as dense as that of a normal human being’s and included an additional layer of leathery epidermis. His lungs were oversized, and his respiratory system was developed in such a way as to allow him maximum wind and endurance with a minimum of oxygen intake.

These features made Thunderbird a natural outdoor fighter and athlete. He could run at speeds of up to 35 miles per hour for extended periods.

Thunderbird died before any of his natural abilities could be redefined through the training that Charles Xavier had planned for him.

John Proudstar was born on the Apache reservation in Camp Verde, Arizona. During his childhood and adolescence, he proved to be an exceptionally strong and vigorous athlete.

Proudstar, however, regarded himself throughout his life as a loner and an outcast. He wished to prove himself to be a warrior in the tradition of his ancestors. He was dissatisfied with what he regarded as the complacent lives led by his fellow Apaches on their reservation.

Although too young to join the armed forces, Proudstar lied about his age and enrolled with the United Stated Marines. That was meant to be his ticket to the kind of active life he desired. He became a corporal and earned a number of medals. But Proudstar again grew dissatisfied with his life once his tour of duty was over and he had returned to the reservation.

Proudstar’s mutant superhuman strength first manifested itself when, at the age of 20, he wrestled and threw a charging bison barehanded to save an endangered little girl.

This feat earned Proudstar fame among his tribespeople on the reservation, but the true nature of his abilities remained unknown until Professor Charles Xavier discovered him.

Using his mutant-detecting computer Cerebro, Xavier located Proudstar, whom he invited to become one of the X-Men. The first mission that Proudstar and six other new recruits to the team undertook was the rescue of the original X-Men from the “living island” of Krakoa in the South Pacific.

Except for Sunfire, these new recruits, including Proudstar, became the “new” X-Men team. Xavier gave Proudstar the code name “Thunderbird.” 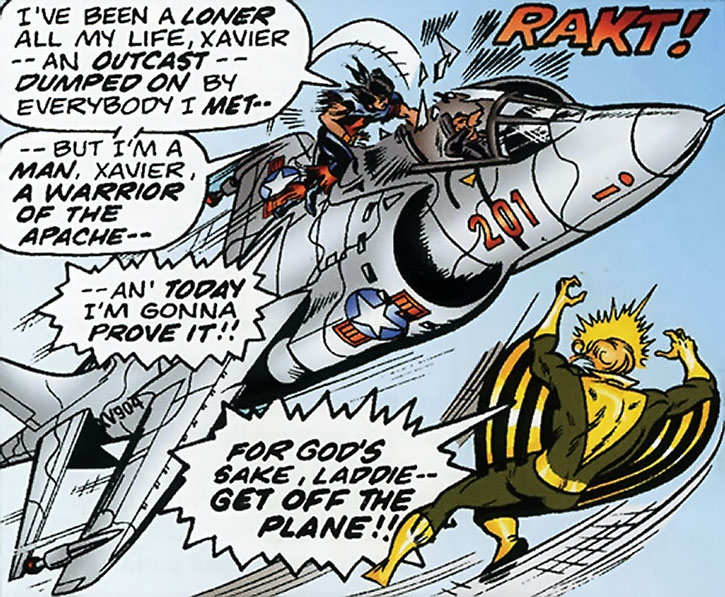 On their next known mission, the new X-Men went to Cheyenne Mountain in the Colorado Rockies. That was the location of a North American Air Defense command center, which had been taken over by Count Luchino Nefaria in an international extortion scheme.

After the X-Men had foiled his plans, Nefaria attempted to escape in a small aircraft. Thunderbird managed to climb onto the plane as it took off. Defying Xavier’s telepathic warnings to get off the plane, Thunderbird asserted that he was finally going to prove he was a true Apache warrior.

Using his superhuman strength, Thunderbird ripped open part of the plane and wreaked havoc on its internal systems. Furiously, Thunderbird pummelled the aircraft until finally it exploded, killing him instantly. Nefaria, however, had reached safety through teleportation.

Proudstar gave off a strong feeling of pride and latent violence.

Thunderbird was a strong, proud man. But while his heart was generous and he upheld the right values with little compromise, he still had problems. His thirst for honor and face was unquenchable. He always had to be the best hero and fighter around, and dreamt of being a mythic warrior, a legend in his own time.

His temper was burning close to the surface. It especially showed among the X-Men, as he was ultimately one of the least powerful members of the new team and knew it.

Well, he was created so that he would die in the second big missions, and he had little place within the X-Men (esp. with Wolverine and Colossus being around). Still, ever since I was a kid I felt his death was a bit of a waste and that he deserved a second chance. 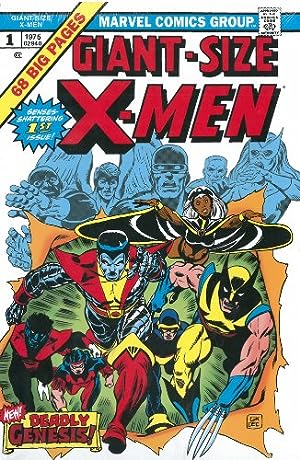