Thundra is a Fantastic Four character, first seen in 1971.

Though she’s by herself straightforward, a profile of her must cover a lot of ground. Since her career involves time travel, and multiple dimensionsOther realms of existence that are not our universe.

So the profile is presented in short-ish episodes :

Thundra is a genetically enhanced giantess. She sports : 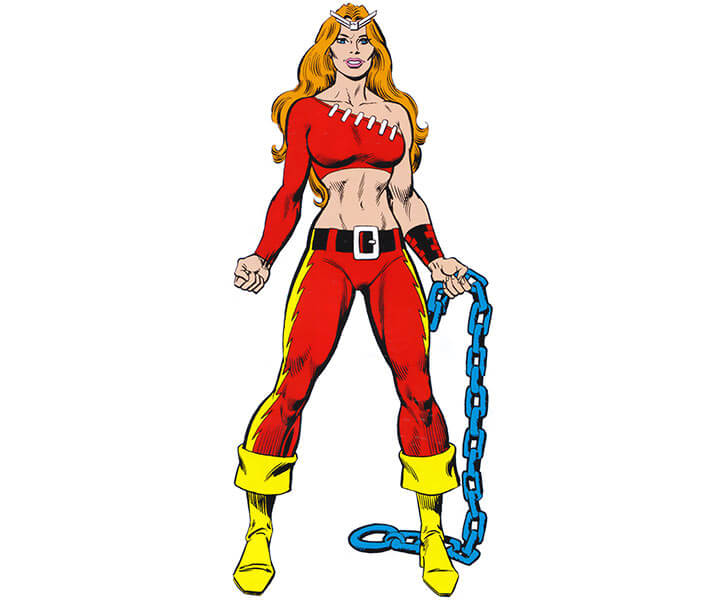 More powerful than a locomotive

Thundra’s strength is about “Class 85”. In practice :

By the standards of the contemporary Marvel Universe, she was therefore top-tier. Though strength levels have since crept up, she remains a serious contender.

However, she isn’t quite as durable as most other persons in this strength bracket. Especially against energy attacks.

Able to punch tall buildings in a… single… punch

Thundra has trained in hand-to-hand combat, weapons and wrestling since she was 8. She also has extensive fighting experience. She’s more pugilistically proficient than even the seasoned Thing.

The Femizon uses this to compensate for her less-than-class-85 durability. With her speed and aggression she’ll usually hit first, and force her foes on the defensive. She also excels at parrying, blocking and dodging.

Against a particularly strong and skilled opponent, Thundra will close in and use WWE-style wrestling moves. Her holds, grabs, suplexes, etc. are fast and technically impeccable. She was never seen doing the People’s Elbow, though.

Thundra carries a big chain, but seldom uses it. Still, its additional reach allows for surprise tactics. Such as ensnaring an opponent with the chain, pulling them in, and punching them into next week. 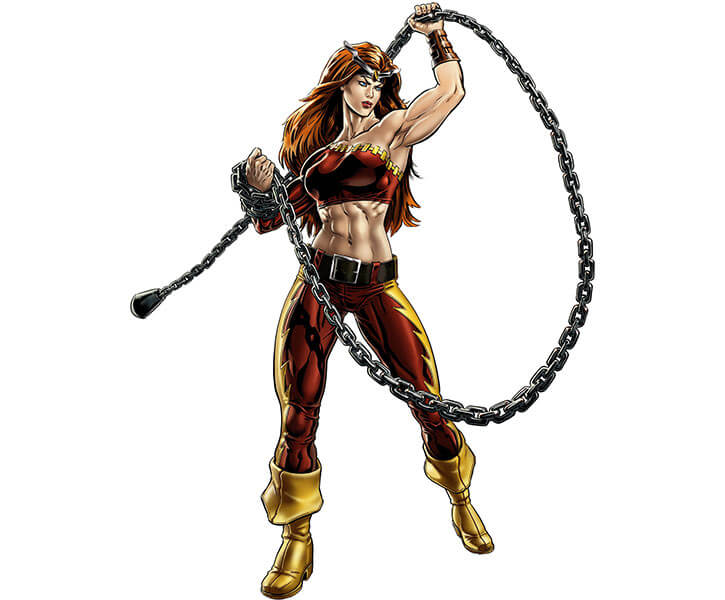 Faster than a Spandau ballet

Thundra can perform some athletic moves with superhuman speed and endurance. For instance, she runs about as fast as an ordinary motorcar. She can sprint for hours, like a freight train of flowing gingerness.

One scene implies that she can do Hulk-style jumps. But that account is atypical. However, she can land from great heights thanks to her powerful legs.

She’s a superhuman climber. Thundra once scaled the 36 floors of the Baxter Building (by clawing and kicking holds into the façade) within 30-ish seconds. That didn’t even wind her.

Her remaining lifespan seems to be two or three centuries. She once mentioned she wasn’t sure to live to see the XXIIIrd century if she remained stuck in the XXth.

Thundra is forceful and charismatic. She has an aura of authority around her, particularly toward women.

She’s also smart, good at planning and management, and believes in knowledge and hard work.

Like all Femizons, she received a special treatment making her invisible to alien symbiotes – the species of Venom or Carnage. Femizons use masses of symbiotes as static defences, often to fill moats  . Since they can’t perceive Femizons, the aliens will only attack men. 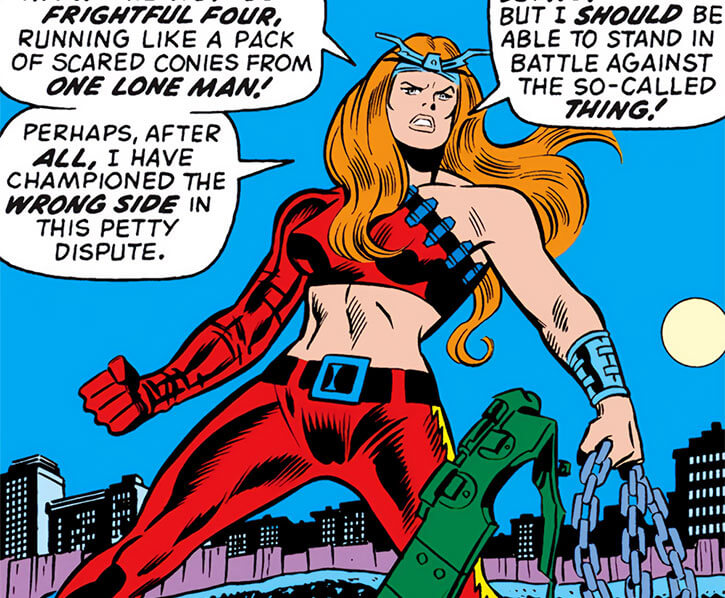 I already put on some 1971 music in the previous entry for atmosphere. But, oh well, one big hit of that year — Treat her like a lady — by the Cornelius family seems kinda inevitable.

So here we go – gospel-tinted 1970s soul music with a strong funk energy.

(Again, this assumes you’ve read the previous chapter, about Femizonia).

Thundra was a one-of-a-kind success in the United Sisterhood Republic’s quest for a super-champion. Like with Captain America (Steve Rogers), the process couldn’t be replicated.

She was raised and trained as the great hope of the USR.

Since her culture revered physical strength, it was understood that she would become their leader. 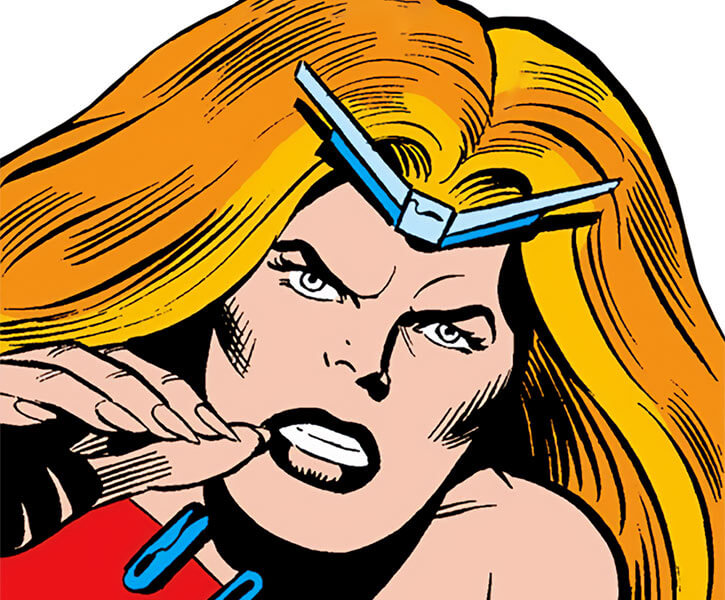 Thundra was successful as the USR’s super-weapon. She both defended and greatly expanded their territory. She killed many men and freed their female slaves. The USR came to control the bulk of North America.

She was the second-in-command of the USR’s military, under the Queen. But this seniority put her in unpleasant proximity with how patriotic propaganda — a necessity to hold the USR together — was spun to manipulate the masses.

It also meant that Thundra learned about a secret discovery. The USR had been piecing together how another XXXIIIrd Century, Machus, had been influencing their timeline :

The USR had been developing time travel tech. Their plan was therefore to send their champion back to 1971, to publicly defeat the foremost strongman and fighter of these times.

This was theorised to have ripple effects that would stop Machus from being ascendant. It was even possible that it would now be Femizonia influencing and rewriting Machus’ reality.

After reaching the past, Thundra allied with the FF’s foes the Frightful Four — at this point the Wizard, Sandman and the Trapster. That would facilitate reaching her opponent.

So, here’s the Thing

Thundra was instrumental in allowing the Frightful Four to storm the Baxter Building, and defeat their opposite numbers. However, the Femizon forbade her allies from harming the FF.

Now knowing that she could take on Mr. Grimm, she challenged him to another fight. She did so right on Time Square, right during the New Year celebrations.

The death match would take place in a packed stadium. To ensure that the Thing would come, Thundra defeated the Torch and captured Alicia Masters.

Thundra again had the upper hand, and won the extensively filmed bout. However :

Her main mission was accomplished. Though Thundra felt slightly cheated of her victory by Richards’ trick. 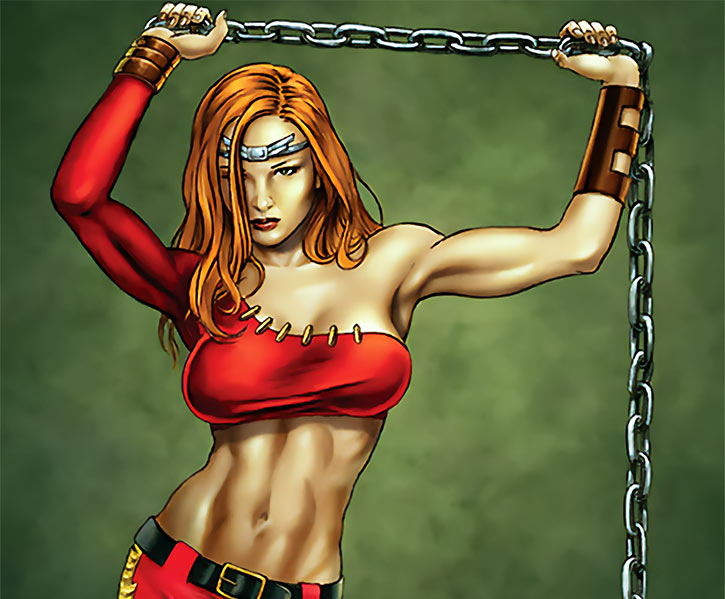 Thundra left the Frightful Four, and stuck around in the 1970s – and the New York City area.

She twice intervened to save the Thing – once when he was fighting the Hulk (Bruce Banner), and once when the Frightful Four again attacked the Fantastic Four. She wanted Grimm to stay alive, just in case she needed to publicly defeat him again.

Thundra also intervened during one of Namor’s patented invasions of New York City. To everybody’s surprise but hers, she fought the pointy-eared Speedo model toe to toe. But the Richardses derailed the Atlantean invasion, and the duel didn’t reach a clear conclusion.

The Femizon also struck a friendship with Medusa (Medusalith Amaquelin), who back then was serving with the Fantastic Four. Ms. Amaquelin wanted to learn about Femizon cultures.

However, Machus sent its own champion in the past – super-brute Mahkizmo the Nuclear Man. Either the impact of Thundra’s actions had not been enough, or Machus could launch a counter in time.

Thundra enlisted Reed Richards’ help. She explained that her stay in the XXth century had changed her mind about gender equality. But she likely was just telling Richards what he wanted to hear, as she needed his scientific expertise.

Mahkizmo invaded the Baxter Building, mauling the FF. Thundra came in just in time to engage him, saving her allies.

But it was a trap. When she touched Mahkizmo, they were both snapped to XXXIIIrd Century Machus. 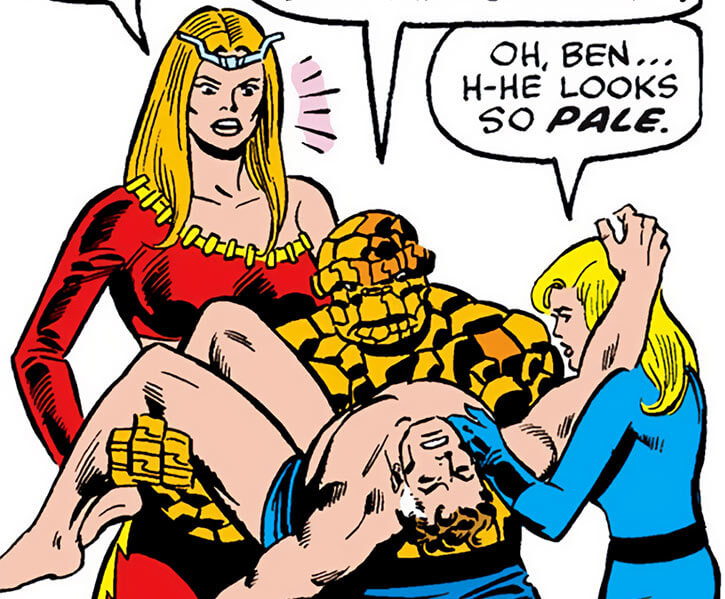 Even after being reunited with Thundra they barely held their own, due to a willpower-dampening field. During one such fight, Medusa fled.

The red-tressed Inhuman actually returned to the XXth Century, then to Femizonia. She convinced a force of Femizons to come along and invade Machus. They destroyed the will-sapping field generators.

As we’ll discuss later, the “merger” thing seems to have been a brief glitch, or an outright illusion. Both the Machus and the Femizonia timelines were actually intact. But Machus was no longer warping Femizonia’s continuity.

Thundra’s victory was celebrated through the United Sisterhood Republic. Though in the official accounts, the role of the male FF members was edited out.

As he thought that both timelines were gone after the merger, Reed Richards stopped monitoring Femizonia and Machus. Which may have been a core goal of the deception.

However, that also meant that Thundra had to stay in the past. To maintain the pretence that there was no Femizonia to return to.

This takes some balls

But Thundra still had goals she wanted to accomplish in the past. She wasn’t immortal, and the USR still couldn’t produce another super-champion.

Therefore, she sought to have a daughter in the XXth century, with a super-man.

Her pick would have been her friend Ben Grimm, who had a noble heart and immense strength. But he wasn’t interested. After weeks of heavy-handed flirting Thundra came to accept that he would never betray Alicia Masters anyway.

Hanging around with Ben meant that Thundra was involved in more FF business :

Thundra then located one “Mister Kant” at a gym. She apparently knew that he was the amnesiac Hyperion (Zhib-Ran), a “Class 100” super-strongman. However the Avengers barged in, reawakening Zhib-Ran’s memories.

A brawl ensued. Thundra fought Ms. Marvel (Carol Danvers). But the Vision (“Victor Shade”) had everyone calm down. 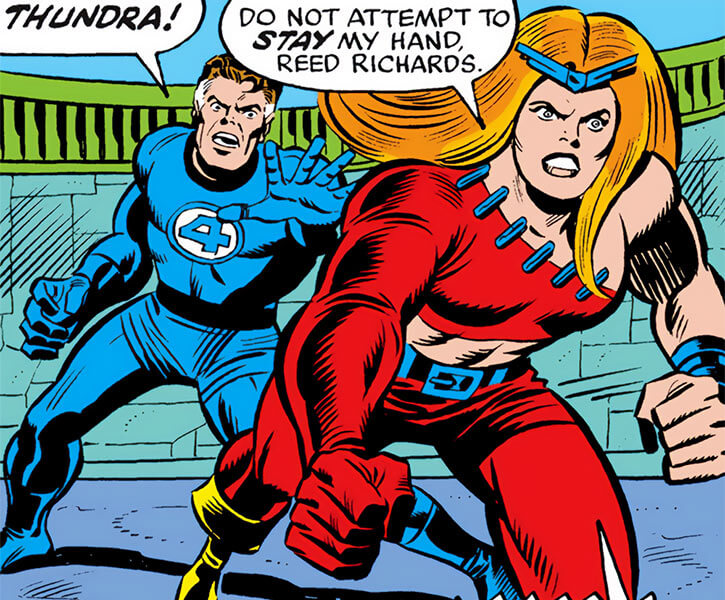 However, Thundra couldn’t locate Hyperion again. After rescuing wrestling promoter Herkimer J. Oglethorpe from a mugging, she entered the superhuman wrestling circuit instead.

Thundra was much stronger than other female wrestlers, given the upper bounds of the Power Broker super-strength treatment. However, her match against Titania (Davida deVito) was rigged, as deVito had a hidden knockout drug injector.

Titania and her fellow hard-wrestling ladies, the Grapplers, were secretly working for Roxxon Oil’s dirty tricks department. Titania capturing Thundra thus allowed Roxxon to make the Femizon an offer. Help with raiding the government’s Project: PEGASUS, and get a ride back to Femizonia using Roxxon’s Nth Projector technology.

Thundra and the Grapplers failed against the PEGASUS security – the Thing, Giant-Man (Bill Foster) and Quasar (Wendell Vaughn). But while they caused a diversion, Dr. Thomas Lightner became the Nth Man.

Thundra helped contain the resulting crisis, out of friendship with the Thing. 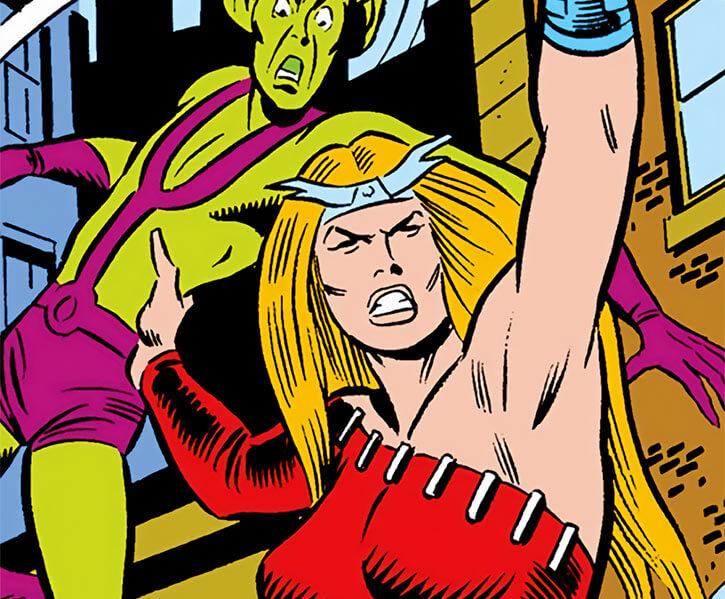 As it turned out, Roxxon never intended to honour their deal with Thundra. Her contacts with the shady megacorporation vanished.

As she investigated, the Femizon once again ran into Mr. Oglethorpe, who now repped Hyperion (Zhib-Ran) as a super-wrestler.

Like Thundra, Hyperion had briefly worked for Roxxon’s security. He also had been promised a Nth Projector ride back home.

Thundra told Roxxon that she’d do anything to just go home. But in actuality :

For the woman who has everything

All that was left to do was to tell the Thing about what she had discovered about Roxxon’s plot against PEGASUS, to honour a promise. And perhaps convince Reed Richards to study the Projector, to gain even more data to advance Femizonian time travel tech.

However, Hyperion’s rashness, and the arrival of Roxxon’s security, left Thundra short on time.

This second was sufficient for Hyperion to end up trapped between dimensions, rather than reach Earth-715 with Thundra.

But, unbeknownst even to himself, Zhib-Ran was actually an artificial being. So it’s likely that he wasn’t fertile anyway.

Thundra had spent years in the past. But she apparently returned to the XXIIIrd century not long after she left.

However, her actions in the past had changed her future. The USR now was different, and Thundra was its Empress.

Machus then struck at Femizonia. They sent in an android emitting radiation that weakened women, and emboldened men. Thundra jumped into the past to recruit her buddy Benjamin, and the Thing destroyed the android.

Knowing that Johnny Storm had just married “Alicia Masters” (actually the Skrull Lyja), Thundra proposed to the Thing one more time. But he declined, not wanting to engage in a rebound romance.

Thundra then experimented with sending Ben back into *his* past. This way, he could avoid making the mistakes that had cost him Alicia’s love.

The Thing eventually renounced this happier alternate timeline. He felt that it was but a lie, and returned to Earth-616The main Marvel Comics version of Earth. 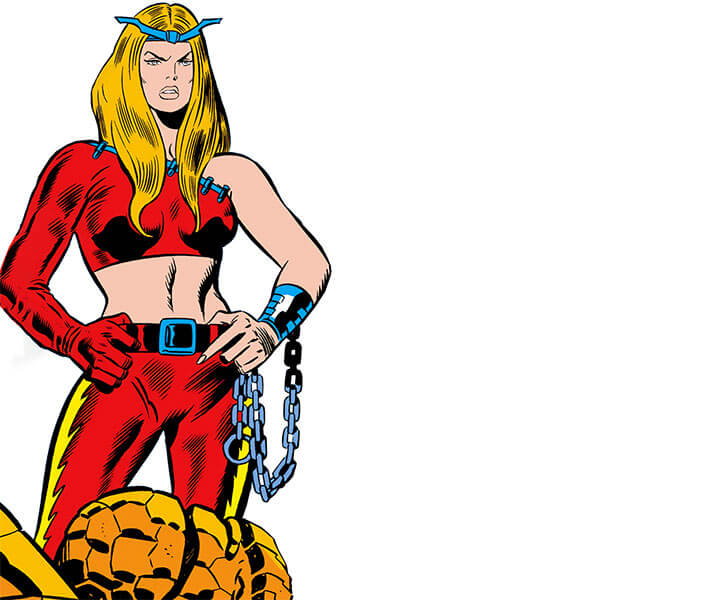 This closes Thundra’s “classic” material – chiefly the 1970s, as she didn’t appear much during the 1980s.

The next chapter will concisely explain what happened during the 1990s and 2000s. So chiefly Polemachus stuff, and Thundra’s time travel shenanigans in Jeff Parker’s Hulk: Raging Thunder.