“She stalks the night – a half-human huntress, preying on those who would prey on you !”

This profile is part of a chronological series, which you really should read in order.

As this era opens Tigra moves back from Marvel’s horror mags to the super-hero titles. Her power level immediately increases.

She now operates in a space closer to Spider-Man (Peter Parker) than to the 1970s version of Werewolf by Night.

Tigra is now strong enough to lift about 5 tons. Her agility, speed and senses are clearly superhuman, especially her sense of smell.

She is highly mobile and acrobatic. Her strength, nimbleness and claws give her impressive climbing and leaping ability – few places are out of her reach.

Tigra has also been clocked running at 70+mph (113+ km/h), which is about as fast as a sprinting cheetah. Officially she can do 50mph (80 km/h), but 70mph did not seem to require extraordinary effort.

Her sense of balance seems better than even Spider-Man’s. 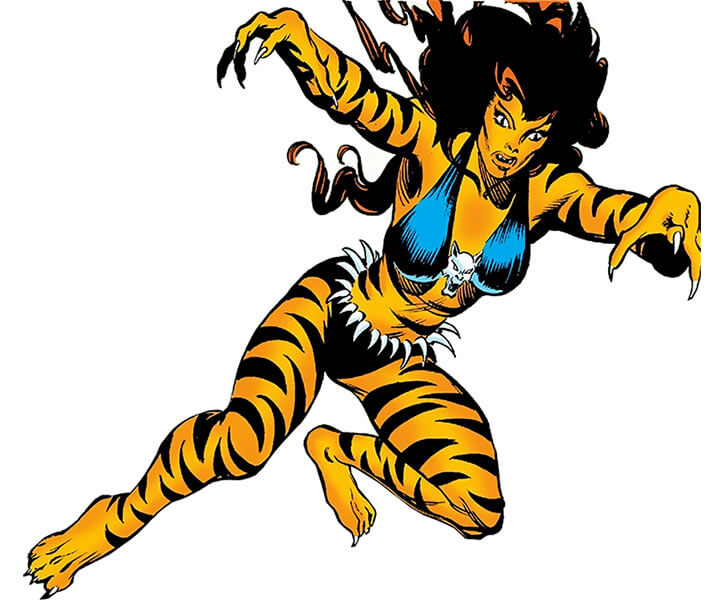 Despite her heated temper in combat, Tigra is good at keeping her claws retracted in order not to inflict deadly wounds. She routinely pulls her blows when fighting humans – EV 05 in DC Heroes, Damage 4 in DC Adventures.

However she will use her fully extended claws against robots and the like. That makes her much more efficient against those.

Tigra never uses her claws to stick to surfaces like Spider-Man does. They are presumably too short for that. But she can claw holds into hard surfaces even under difficult conditions, such as the metallic wings of a flying plane.

Tigra doesn’t generally perform as well as she should given her strength, reflexes, etc.. Her performance seems hampered by her psychological limitations. She doesn’t have the “right stuff” that makes a high-end super-heroine.

No net worth individual

After the 1978 departure of the Cat People, Greer also has a terminal income problem.

One of the reasons she’s running around in a bikini is that… she can’t afford proper clothing. 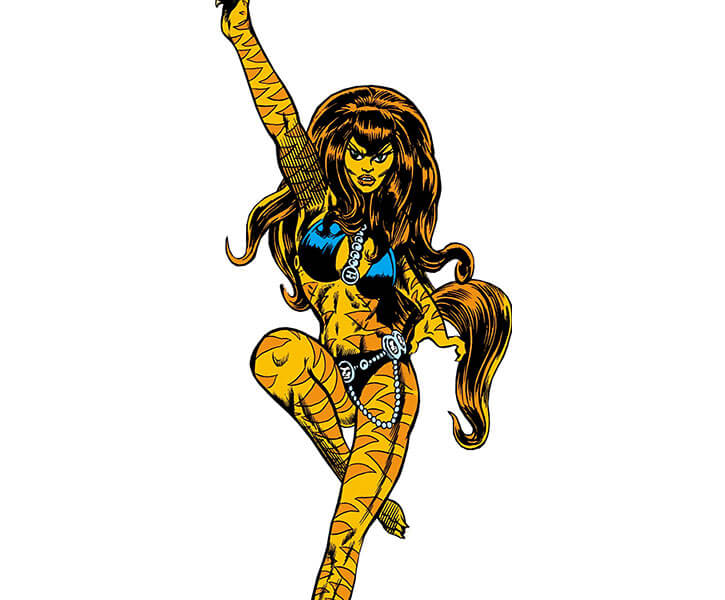 (This section starts where the History section of the previous writeup ended).

In 1976, whilst visiting Cat People researchers, Tigra teamed up with Red Wolf (William Talltrees) and clashed with the second version of the Rat Pack.

It turned out that the real leader of the Pack was the Super-Skrull (Kl’rt) , who vastly overpowered the two adventurers. But Tigra and Wolf defeated him using the mystical artefact wot the Skrull had just stolen.

Not knowing what to do with said artefact, Tigra handed it over to Reed Richards for safekeeping. This was the beginning of her occasional collaborations with the Fantastic Four.

When Kraven and some ex-Hydra hirelings attempted to kidnap a medical researcher, Tigra was caught in the fray.

During the shootout with the police, the goons severely wounded a little girl. It was feared that only the kidnapped doctor could save her. Greer therefore tracked Kraven down.

Albeit the hunter was a cannier and more experienced fighter, she proved to be stronger and just as fast. Tapping her feral rage, Tigra prevailed, rescued the doctor and had him save the girl.

Some weeks later, Tigra learned that a renegade Cat Person called the Cougar had stolen the power source of the Tomazooma robot. Tomazooma had been destroyed months before by the FF.

She contacted the Thing for help. This turbulent tangerine-tinted team trounced the Cougar with the help of his fiancée, Sheila Conklin.

Later that year, Tigra tracked Kraven to New York City. Though she lost his trail, she learned that something funky was going on at the Baxter Building.

The Frightful Four (down to three at that point – the Wizard, the Trapster and Sandman) had captured the Fantastic Four.

The criminals were holding tryouts to recruit a fourth member to fill out their roster. Tigra applied, gambling that she was too obscure for the Frightful Three to identify her as an heroine. She soon freed the Thing and the Human Torch.

Howbeit the arrival of another applicant — the Brute — led to defeat.

The Impossible Man freed everyone again and Tigra mauled the Wizard, turning the tide and resulting in a victory of the Fantastic Four.

Tigra hung around with her buddy the Thing for a while. Together they defeated the Metalloid.

At this point there was a vague sense she might join the FF in some manner, but nothing gelled.

Tigra, Susan Richards and another guest, Thundra, eventually realised that the Brute had secretly replaced Reed Richards during the Frightful Four case. Being the Reed Richards of Counter-Earth, he was a perfect lookalike.

Tigra and Thundra saved Sue from the Brute then helped her defeat the Baxter Building’s automated security measures to confront the villain. The team simultaneously fought a powerful Mad Thinker android who invaded the building from the Negative Zone.

With the Earth-616The main Marvel Comics version of Earth. Reed Richards back, the FF were reunited.

However, Tigra and Thundra both left. The Thing could no longer bear Thundra’s insistence that he mate with her. And in this context Tigra’s occasional playful flirting with him also tried his patience. 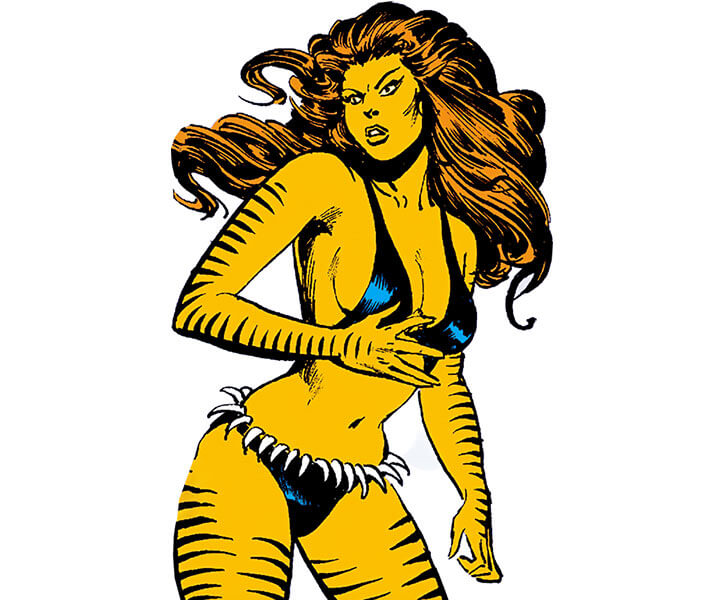 In 1978, Spider-Man recaptured Kraven. But the hunter escaped while he was being transferred back to Illinois, and Tigra resumed her hunt.

She found his New Jersey hideout. But it was a trap. Kraven sprayed Tigra with a special gas, followed by the application of a mind-control collar.

This equipment was tailored to bring Tigra down, and Kraven made the nearly-mindless werecat his pet. Kraven then ambushed Spider-Man and sicced Tigra on him to complete his vengeance.

Thankfully, Spidey deduced the role of the collar and wrecked it, freeing Greer’s mind.

Though Kraven had gadgets tailored to attack Tigra’s weaknesses (such as sonic weaponry assaulting her super-sensitive hearing), she and Spidey defeated Kraven.

A few months later, the New Orleans Cat People finalised a genetic ray. They erroneously thought that Tigra wanted to become human again and that it would be their gift to her.

But the ray was stolen by Tabur. Tabur was a humanoid super-evolved cat from Wundagore, whom the Cat People had tried to adopt as one of their own.

Tabur killed Dr. Tumolo when she discovered that he was a traitor. However, she had time to send her ghost image to warn Greer.

Tabur tweaked the ray and triggered chaos in New Orleans by turning zoo animals into their prehistoric forms, and people into apes.

As the Cat People met him in combat, he retroevolved most of them into sabretooth tigers. That was a mistake – they were still loyal toward Tigra, and were now much more efficient fighters.

Tabur was defeated. Tigra used the ray to restore all its targets to their former selves, though she wasn’t interested in changing herself.

It is apparently at this point that the Cat People left the Earth dimension. But they gave Greer a parting gift. Her cat amulet was enchanted to effortlessly cast an illusion making her look human.

Tigra seldom used this, though. 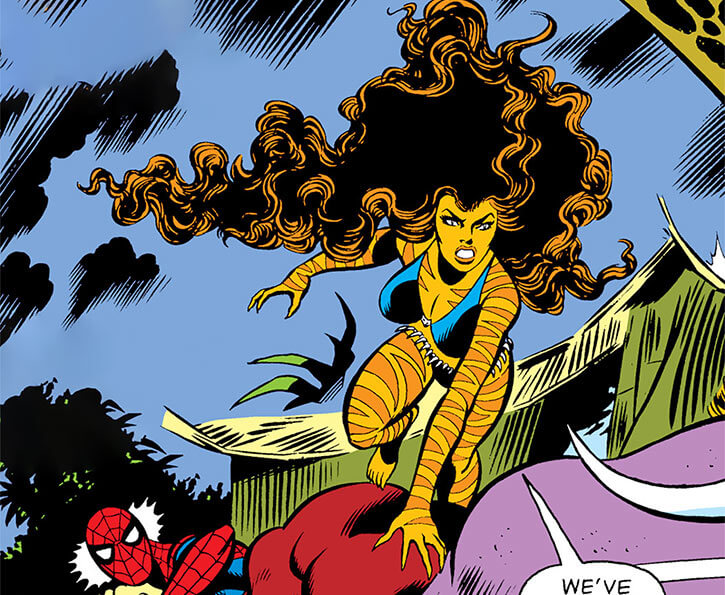 Though Tigra’s costume looks minimal, it actually changes during this era. She accessorizes it, first with chains and later with a belt of teeth – jungle heroine-style.

Greer is still trying to deal with the fact that she’s not human, not Cat People and not cat.

Her hunting and fighting instincts are particularly strong, and she will often be submerged by a hunger for hunting when going after criminals.

She’s always able to stay her hand and control how hard she hits, but she can get quite savage.

She originally rationalises these instincts as a taste for justice. Witnessing injustice and seeing people prey upon the defenceless make her dangerously angry, but at least she can tell herself that it is because she wants to fight for justice.

One telling example of this is her first confrontation with the Rat Pack after the gang massacred a hapless Native village.

She charges in in the name of vengeance. But after the fight is done, she suddenly feels terrible about herself. Since she should have helped the dying and wounded first – instead of giving in to her animal side lusting for a fight.

This passion for justice fades over this era. By 1981 she’s mostly interested in the excitement and adventure, with the added complication of having to make a living.

(This may be a side effect of reframing her from a horror character (“a huntress who preys on those who would prey on you”) to a C-list super-heroine).

Tigra can be an implacable, somewhat animalistic hunter with great dedication toward catching her prey. This is particularly visible during her recurrent clashes with Kraven.

However there have been as many instances of her being humane and forgiving. Such as the Zabo situation or establishing rapport with the Molecule Man.

It seems pretty random. It may in fact be random, depending on her current balance between her souls. See the next profile for a discussion of Tigra’s souls.

Perhaps because her human nature is struggling with her cat nature, Tigra is even more taunting and flippant toward her opponents than the Cat was. She can deliver some remarkably catty remarks. In this respect she is somewhat reminiscent of Spider-Man during the same era.

“Free-spirited, oft wise-cracking defender of the innocent – and huntress with a problem with her animal instincts” covers about 80% of the characterisation during this era. Even with allies such as the Thing she often appears to be playful, whimsical and a bit superficial and capricious.

Greer still has a small feminist streak. But it’s more like a vague nod toward her roots than a noticeable character trait. 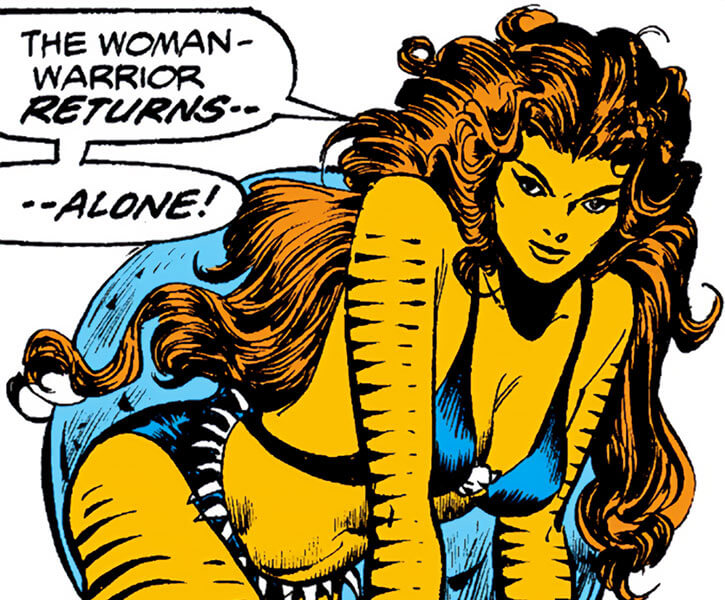 (Jumping on top of a war mammoth to kick the rider down) “Heads up, big boy ! It’s my turn for the pony ride !” 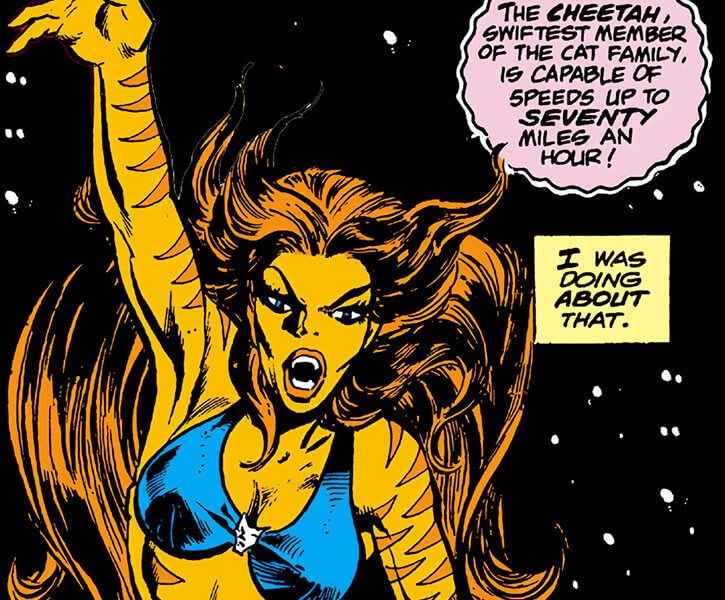 Accuracy is Regretful when used against living beings.

CAT RING/AMULET [BODY 10, Alter-Ego, Insta-Change]. The Insta-Change is retrofitted in the amulet in 1979, and does not exist before. 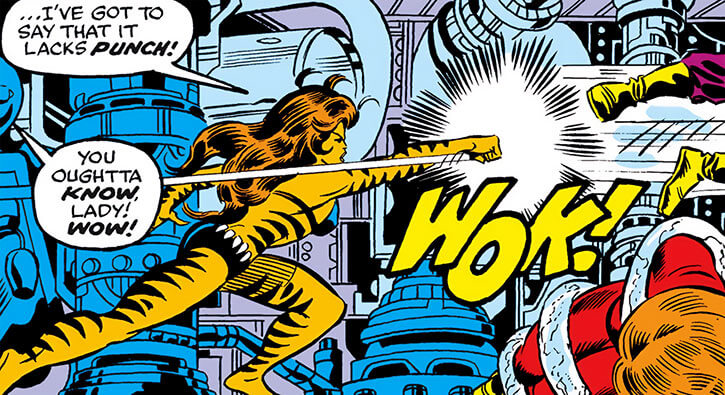 Tigra has robust stats, but her performance is haphazard and often lacklustre. In DC Heroes logic, that is a clear Hero Points problem.

Though she starts this era as a dynamic heroine with 050 to 060 HPs, she quickly flounders down to 025.

If Tigra starts rolling poorly she won’t be able to compensate with HPs for long. She may have to stop spending and get defeated/captured if she’s to keep an emergency stock of HPs.

Since her performance dramatically improves whenever she fights Kraven the Hunter, our hypothesis is that her player hoards HPs for these fights. Thus Tigra spends relatively little HPs in most situations, but unleashes her spending when the hated Kraven shows up. 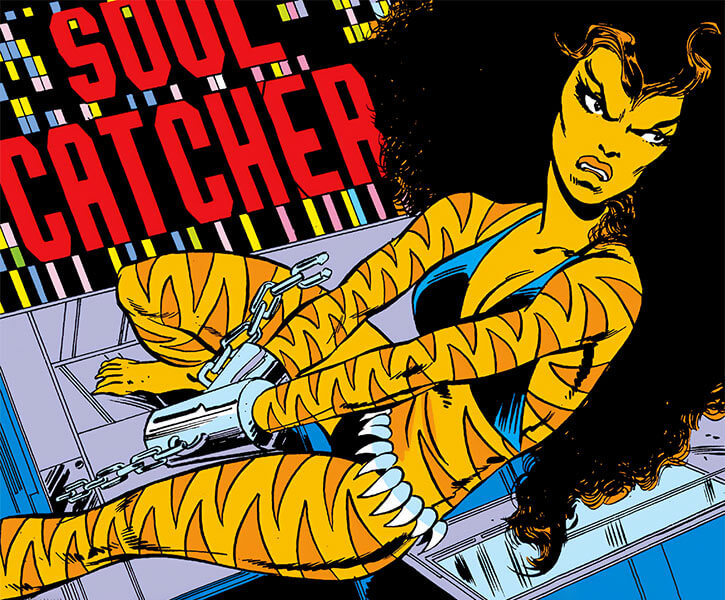 Human form ● 1 point (Removable) ● Descriptor: Cat People magic
Feature 1 (can revert to her human form using her amulet, but almost never does so). 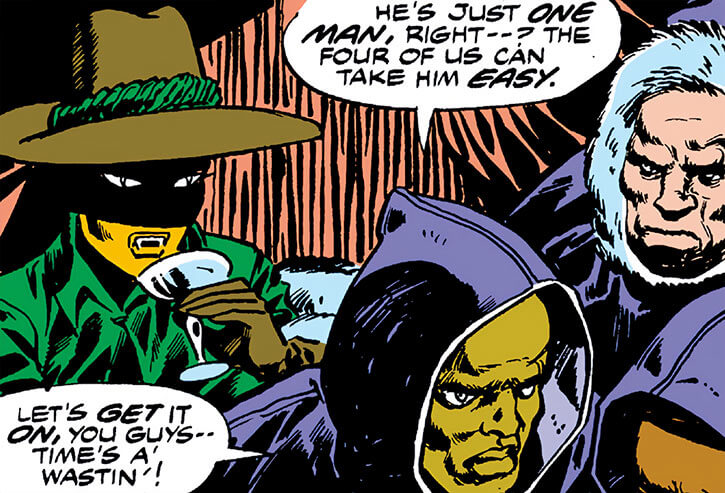 In the previous entry I was still using Enhanced stats and stuff since Greer would sometimes operate as a human person. But at this point she’s basically Tigra all the time. So there’s little need to bother with explaining the difference between forms.

She’s stronger and faster and more experienced, though her Insight is starting to go as her Cat powers recede.

During this era Tigra demonstrated pretty good stats, but keeps underperforming as a heroine despite these. She lacks a spark, an heroic focus, the right stuff.

The closest equivalent in game terms is that Tigra somehow gets a much-reduced Hero Points allotment – by 60% or so. She is thus often at the mercy of the d20, making her performance inconsistent and forcing her to save her Hero Points.

She keeps those for when she’s in particularly serious danger, or when she’s facing Kraven the Hunter – against whom she’ll gladly spent the Hero Points she managed to save.