This is the second profile for Marvel superheroine Greer Nelson. We strongly suggest reading her profiles in their chronological order, namely :

This profile covers… her first two appearances as Tigra.

Yes it’s a short span, but these are different from what came later. So discussing it separately is much clearer.

“Tigra the were-woman” was the usual way to refer to her early on. It continued to be used sporadically during the 1970s and 1980s.

It was presumably dropped after somebody opened a dictionary to see what “were” actually means  .

This profile corresponds to the brief era when Greer seemed less powerful as Tigra than she was as the Cat. By her third appearance her power level had visibly increased.

Tigra’s first two appearances are in Giant-Size Creatures and Monsters Unleashed. These were part of the Marvel Comics horror line.

Its protagonists did not generally operate on a super-heroic level. Frex, Tigra seems patterned after Werewolf by Night in terms of power level. Superhuman, but not massively so. 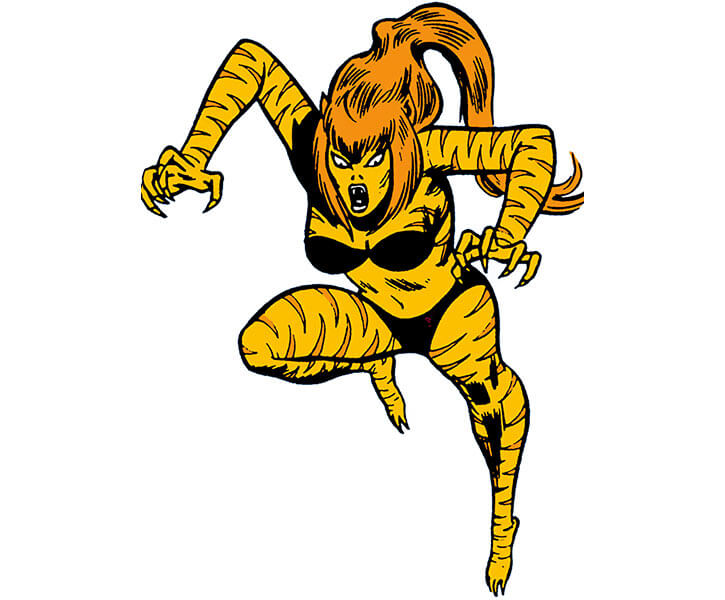 Thus, while Greer has a superhuman level of strength and high levels of speed and agility, she operates more on a cinematicThe level of power and (un)realism found in a spectacular action movie. scale than a super-heroic scale.

She also has claws and a highly-developed sense of smell.

Yet she lacks night vision, despite having cat-like eyes.

Furthermore, Tigra’s instincts tend to cloud her reasoning. She’s not dumb by any means, but she tends to get single-minded about hunting and fighting. And thus not to observe her environment.

Tigra occasionally evidences the old empathic powers she had as the Cat. Sometimes it manifests as a form of weak danger sense. It is also partially based on her animal instincts.

Greer knows about the underworld dives in Chicago. She remembers her cop husband mentioning those. This knowledge (and her fine hearing) greatly facilitates info gathering in the Windy City.

Tigra can revert to her human form by concentrating on her huge ring. But this becomes increasingly difficult. Therefore, she spends all her time in her furry form.

As a human, she seems to be abnormally strong, graceful and swift. Perhaps superhumanly so, given her modest stature. Logic suggests that these are her Cat powers, still active when she’s in human form.

Our game stats also *assume* that she retained her biology knowledge and vehicular skills. 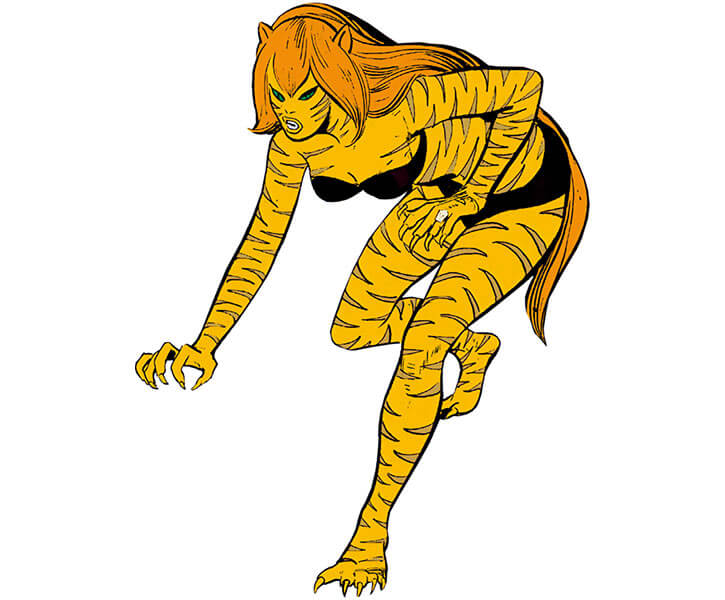 Until she joins the Avengers, Tigra is in dire financial straits.

One assumes that Mrs. Nelson’s income is but a paltry pension. The widow of a young police officer killed outside the line of duty seldom gets significant money.

An obscure ability of the Cat People is that, when in deadly danger, they can choose to die. This projects a ghost-like image toward a loved one.

If the “ghost” is sent toward a fellow Cat Person, which will usually be the case, the recipient will be guided by their feline instincts toward the image. They’ll thus meet faster.

The image appears at once lifelike and supernatural. It can talk, listen, interact, etc. with the living for about a minute or two. It will usually deliver a warning and answer a few questions. Then it vanishes and the Cat Person perishes.

This ability was only ever mentioned in a 1978 story. It was only used by Dr. Tumolo.

But is said that all Cat Persons can do this, so we assume that Tigra could.

From a British PoV, I guess there wouldn’t be much choice. So let’s go with Mud’s Tiger Feet out of solidarity with these poor people.

It was a nonsensical, goofy and hugely popular glam pop anthem, still remembered to this day.

(This section starts right where the previous writeup ended, with Greer turned into Tigra by Dr. Tumolo as Hydra attacks anew.)

Her transformation left her weak as a kitten. Thus, Greer had to flee and let Hydra capture Dr. Tumolo.

As soon as she recovered, she tracked down the green-cowled criminals to rescue her mentor.

The were-woman found her within a secret Cat People base in Mexico. This site was occupied by Hydra troops.

However, an accidental clash with the Werewolf By Night (Jack Russell) led to Greer’s capture by Hydra forces. 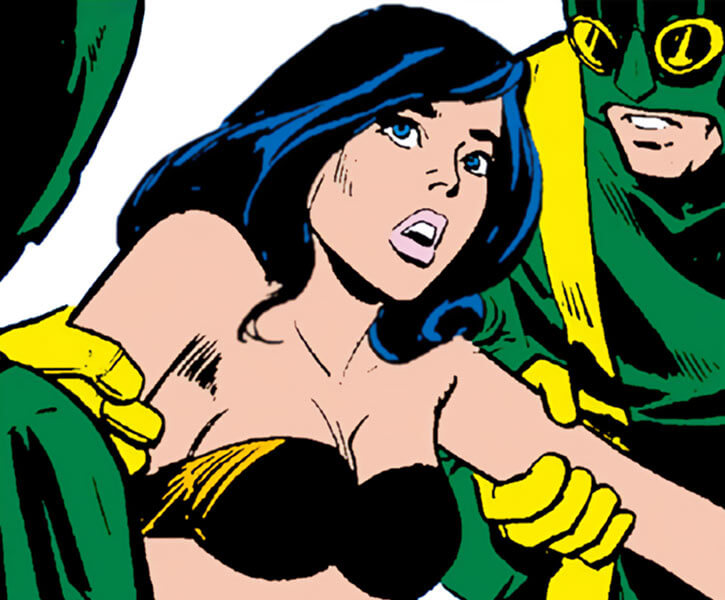 Having a mating interest in a fellow shapechanger, the Werewolf engaged Hydra forces to help Tigra escape. But even this pair couldn’t take on the whole unit.

Dr. Tumolo thus reluctantly released the secret Cat People biological formula that Hydra was after. It was an unique strain of the Black Plague.

The Cat People researchers herded the two shapechangers out of the base. They fled along with the pair, sealing the fatally contaminated Hydra troops inside the base.

Dr. Tumolo then told Greer to revert to her human form. The werewolf therefore lost his sexual interest in her, and wandered off.

Creatures on the prowl

Puzzled by her new nature, heritage and instincts, Greer stuck with Dr. Tumolo as her mentor.

Resuming her adventurous ways, she occasionally encountered odd menaces. Such as Surisha the serenity vampire – and her rat-thing servant.

As reverting to her human form became increasingly difficult, she also consulted with other Cat People researchers in the US to understand her unique condition. 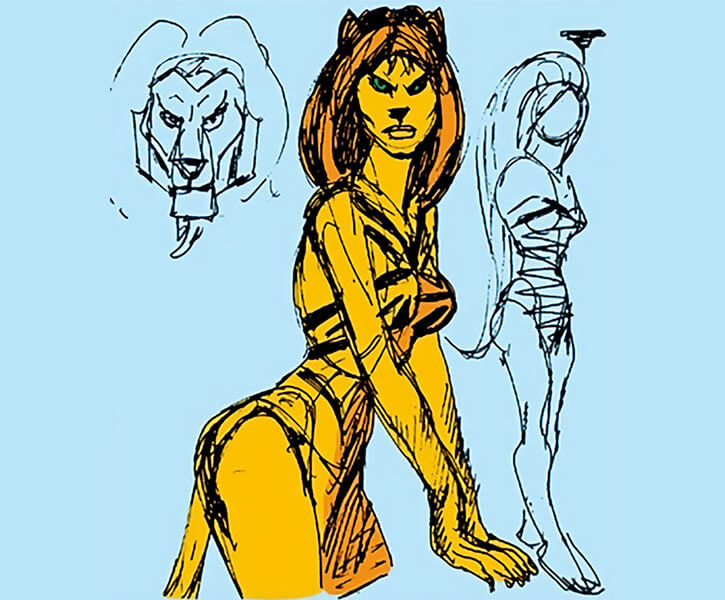 Tigra was developed by Tony Isabella  . It was a reaction to the failed 1972 launch of three Marvel books with female leads (The Cat, Night Nurse and Shanna the She-Devil).

In 1974 the supernatural was big. Therefore, he decided to follow the formula working for Werewolf by Night. Only it would be a were-cat since he wanted a female character (?).

He first came up with the name Hellcat. It, and the Cat’s costume, would later become another character. But Mr. Isabella then decided to have this character be the returning Greer Nelson, the Cat.

Roy Thomas brainstormed with him. They came up with Tigra the Were-Woman as she would be published. Her looks were brainstormed by no less than artists John Romita, Gil Kane and Don Perlin.

Tigra does not have a tail at this point.

Some panels hint at Tigra morphingImpossibly shifting into another form. her hands into something more talon-like when she fights. It presumably was just artistic license. But she will much later demonstrate a more pronounced version of this.

Tigra is a complex and imperfect collageA work made of various things assembled together..

Unclear parts of Greer Nelson died from radiation poisoning. Then some form of Cat Person essence was “grafted” onto her. Most Cat People being transmogrifiedMagically transforming something into something else. cats, this means many of the instincts of a wild cat.

This is difficult for Greer. She remembers all of her previous life and personality. Yet she finds some bits of the latter missing, altered or overwritten by feline and occasionally stranger urges and instincts.

At this point she’s mostly trying to figure out how to handle her life, and to understand what she has become. She feels neither Human nor Cat Person.

(After being addressed as “Miss Nelson”) “It’s *Ms.  * Nelson, or to keep it simpler either Greer or Tigra. I’ve gotten used to both.”

She’s reminiscent of the post-Crisis Cheetah. Back when she was a demi-goddess of sorts serving the “plant god” Urzkartaga… who might just be a plant, but we’ve never been quite clear on that.

Maybe a DCU History for Tigra and Tumolo would involve Urzkartaga and the Cheetah.

Given that Tumolo’s never been seen in cat-person form, maybe in DC her connections are with Barbara Minerva or the cult Chuma heads. They’re supposedly all wiped out, but…

If so the Cat project was an attempt to artificially, and without the plant, recreate the powers of the Cheetah. 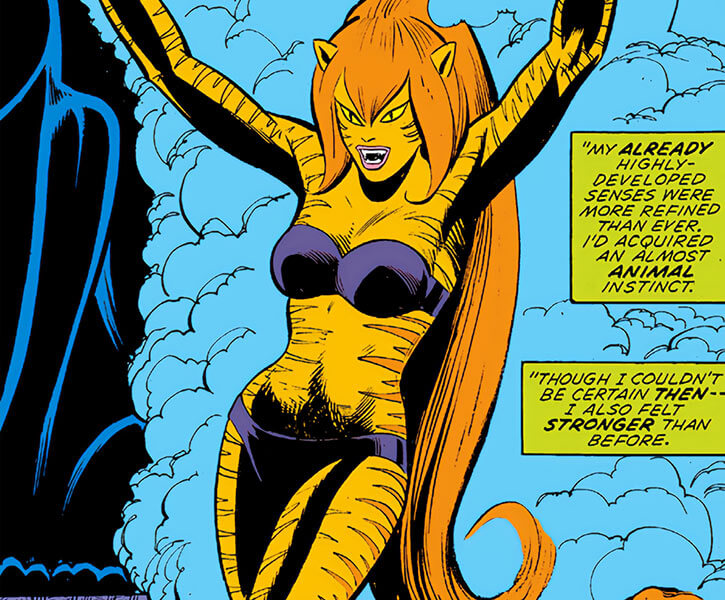 Accuracy is Regretful when used against living beings. 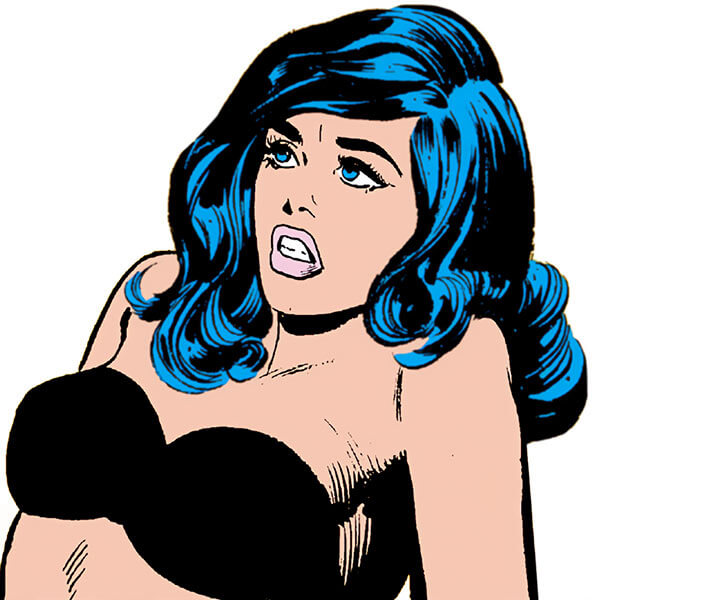 One gets the impression that the Cat Person must overcome their survival instincts to perform this fatal feat. Perhaps a WIL/MIN roll against 04/04, and/or a 05 Hero Points fee.

Greer is very briefly seen in human form. This appearance hints that she still has some of her Cat abilities even after the Tigra spell. 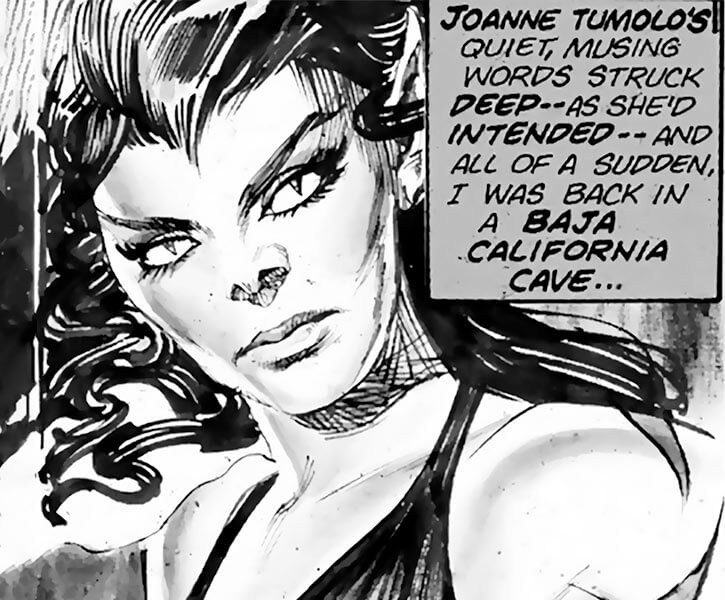 The Claws are treated as having a +10 Offence bonus for PL computations.

The surprisingly low Stamina is compensated for by a high Defensive Roll to model her tendency to be knocked out by surprise attacks.