Talking with my brother, I said “You can find practically any character you can think of on W.org” and he said, how about “Tim the Enchanter”?…

Tim is from the 1975 surreal comedy Monty Python and the Holy Grail. Back in the 1970s and 1980s this movie was *huge* among geeks, and reflexively quoting from it remained an epidemic about 2 decades after that. Most of us old-timers maintain that it’s an hilarious movie.

Holy Grail is an absurd retelling of Arthurian myths and the quest for the Grail. Tim is a sort of nonsensical Merlin figure.

Tim is somewhat flamboyant with displaying his powers. When Tim first meets the knights he uses many unecessary explosions to unnerve and impress the knights. The explosions have an after effect that sounds like fire works.

Tim also carries with him a staff. This staff only has 2 effects. First, it can shoot forth a jet of flame about 3 feet long. Second, there is a projectile like a fireworks rocket that fires from the other end of the staff.

One trick Tim uses to impress others with a show of fire is to use an automatic action to Teleport after causing an explosion where he’ll be landing.

Despite the fact that Tim is presented as an enchanter his powers could arguably be the effects of science. People in the Arthurian era probably couldn’t distinguish magic from science anyway. It is possible that Tim is an early (al)chemist who is using smoke bombs and gunpowder to do his feats.

The explosions at a distance could be pre-planned and pre-set explosive devices for dramatic effect, set to detonate at a point when he is engaged in a dialogue with the most recent visitors. Instead of using premonition he might have just spotted the new arrivals with an early telescope.

His teleportation could be him running away or horseback riding under the cover of a smoke screen (in DC Heroes terms, Fog: 06 or so), and once arriving at a destination he could just throw another smoke bomb and just appear to have teleported in with an explosion. 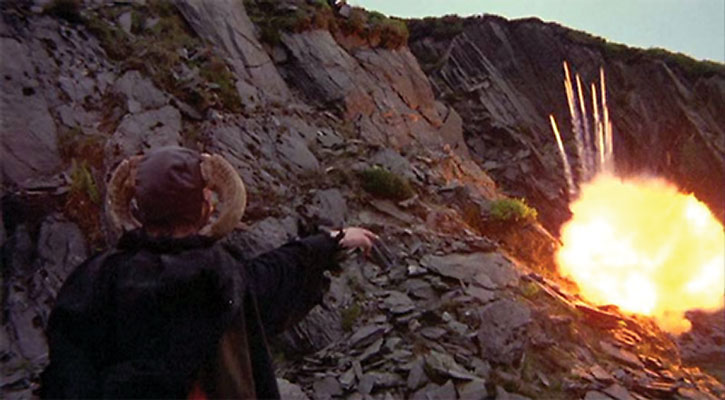 His staff would be filled with gunpowder and fireworks as well, and the projectile he used would be a primitive hand grenade made more for show than effect (more Flash than Bomb).

If this is the case, his understanding of science is still primitive, and not powerful enough to defeat the Vorpal Bunny. Hence the need to recruit help. Still it’s great for effect, and he would likely, in game terms, have a few APs of Scientist and Gadgetry (Chemistry) as well as an Expertise in Gunpowder and Fireworks.

Tim’s past is shrouded in mystery. All we know of him is that he apparently knew Arthur and his knights were coming to find him and why. This could have been through magical means but more likely it is from knowing the old man from scene 24.

He decided to have a little fun with them, perhaps at the cost of their lives. Tim led the knights to the Cave of Caerbannog where the killer rabbit was waiting. He had apparently done this before as he says “I always tell them…and they never listen…”

The classic Tim the Enchanter scene in 720p.

Tim is an eccentric, reclusive enchanter with a penchant for fire-based magic. Tim’s overall presence is commanding, and observers of his magic often applaud after a display. He speaks with a Scottish accent.

Arthur: “Fine… uhm, I don’t want to waste anymore of your time, but… uh, I don’t suppose you could tell us where we might find… a… uhm… a… uh… a… uh…”
Tim: “A what ?”
Arthur: “a… a gaa.a..gaa… gaa.”
Tim: “A Grail !?”
Arthur: “Yes, I think so.”
Tim: “Yes !”
Arthur and his knights: “Oh… thanks. Splendid.”
(More explosions)
Arthur: “Look, you’re a busy man… ah…”
Tim: “Yes, I can help you find the Holy Grail. To the north there lies a cave, the cave of Caerbannog, where in carved in mystic runes upon the very living rock, the last words of Olfin Bedwee of Rheged.” (Waves his hand and thunder rolls) “Make plain the last resting place of the most Holy Grail.”
Arthur: “Where can we find this cave, O Tim ?”
Tim: “Follow.” (takes a step then turns on Arthur) “But ! Follow only if you be men of valor, for the entrance to this cave is guarded by a creature so foul, so cruel that no man yet has fought with it and lived ! Bones of full 50 men lie strewn about its lair, so brave knights, if you do doubt your courage or your strength, come no further ! For death awaits you all with nasty big pointy teeth.”
Arthur: “…what an eccentric performance.”

At the Cave of Caerbannog:
Tim: “Behold the cave of Caerbannog !”
Arthur: “Right, keep me covered.”
Sir Gallahad: “What with ?”
Arthur: “W-just keep me covered.”
Tim: “Too late. There he is.”
Arthur: “Where ?”
Tim: “There !” (pointing at the rabbit)
Arthur: “What, behind the rabbit ?”
Tim: “It is the rabbit.”
Arthur: “…You silly sod. You got us all worked up !”
Tim: “That’s no ordinary rabbit. That’s the most foul, cruel, and bad tempered rodent you ever set eyes on.”
Sir Robin: “You twit, I soiled my armor I was so scared”
Tim, pointing at the rabbit: “Listen, that rabbit’s got a viscious streak a mile wide, he’s a killer.”
Sir Gallahad: “Get stuffed.”
Tim: “He’ll do you up a treat, mate.”
Sir Gallahad: “Oh, yeah ?”
Tim: “I’m warning you !”
Sir Robin: “What’s he do, nibble your buns.”
Tim: “He’s got huge sharp…eh, he can leap about…Look at the BONES !”
Arthur: “Go on Bors, chop his head off.”
Bors: “Right. Silly little bleeder, one rabbit stew coming right up.”
Tim “Look !” (Bors’ head is bitten off.)
Arthur: “Jesus Christ !!!”
Sir Robin: “…I’ve done it again.”
Tim: “I warned you, I warned you but did you listen? No… ohhh no, it’s just a harmless little bunny isn’t it now, well it’s always the same thing, I always tell them -”
Arthur: “Oh, shut up !”
Tim: “- do they listen to me ?”
Arthur: “Right ! Charge !” (The knights charge ahead and get mangled by the rabbit. Tim laughs as the knights retreat screaming).

I would use Tim in much the same way he is used in the Holy Grail movie, as a guide. He could really be fun to role-play if by chance the players don’t recognize him, or have never seen the movie.

Bonuses and Limitations:
Bomb has Controllable Blast radius and Range.

Advantages:
Area Knowledge (Area around the Caves of Caerbannog).

Source of Character: Monty Python and the Quest for the Holy Grail the 1975 Movie. Character played by John Cleese. 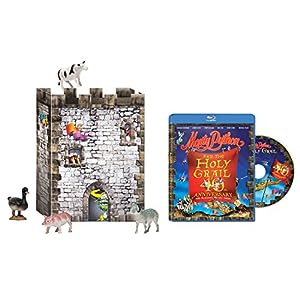 Monty Python and the Holy Grail (and some stupid gadgets)