At first he carried a pair of magnums in macho leather shoulder holsters. He later switched to a 9mm parabellum he called “Lulu” (possibly after his hometown). This weapon seemed to have some sentimental significance to him.

He presumably switched but months before meeting Wonder Woman. Since the Ruger pistols he was portrayed with during a flashback sequences were only released in 1968.

A private detective from St. Louis, Tim Trench was known as a tough investigator with a solid working relationship with the police.

Several of his cases have been chronicled.

A dame named Velma Grayle hired Trench to guard a large ruby. It was a ruse, however. Grayle was the girlfriend of a man who had recently died while trying to kill Trench.

Investigating the dead gunsel, Trench realized the gunman had palmed the ruby. The would-be killer had a plan where he would kill Trench and plant a replica on Trench’s corpse. This would throw his boss’ suspicion away from him.

But Trench understood the truth in time. He made a citizen’s arrest on Grayle before she could kill him.

… there’s always an excuse for it

He was later hired to bodyguard a mob boss fleeing after a failed double-cross on other capos. The man was killed through treachery. Trench chose to save the life of a nearby blind man as the principal stood frozen in fear, offering a perfect target.

Trench killed the hitmen and punched out the traitor. He then walked away without the money.

Trench then moved to New York City. He was investigating the murder of his partner, Archy Miles. He knew the rub-out had been ordered my master villain Doctor Cyber.

While on Cyber’s trail hooked up with Diana Prince and I-Ching, Cyber’s most dangerous enemies.

Surviving attempts against their lives, this trio investigated an isolated fortress belonging to Cyber. There, Trench was captured by Cyber’s henchgirls. He was taken to the Doctor’s underwater base.

While Cyber intended to execute him, she took a fancy to Trench’s manly and confident manner. In practice he became more a guest than a prisoner.

Prince, Ching and Trench again attempted to take Cyber down. This was based on Trench having overheard Cyber mentioning the European nation of Bjorland.

They reached a Bjorlandian village. However, every single local served Cyber. Ching noticed the discrepancies in time, and Diana’s explosive earrings allowed her to box the hostile crowd between collapsed houses. The trio then ambushed Doctor Cyber as she arrived by helicopter.

However, the perceptive Cyber had noted Trench’s greed. She offered him a tiny fraction of her weekly earnings — a box full of precious gems — to turn against his allies and gun them down.

Trench turned and shot above Diana’s and Ching’s heads. He then flew away in the helicopter with the jewels, leaving Cyber in the hands of Diana and Ching.

Trench later had an absurd, gratuitously deconstructive and lamentable appearance written by Millar. Who licks goats.

Although he’s not a bad guy, he’s coldly realistic and looking out for number one. He’s attracted to money more than anything. And he’s not completely opposed to committing morally questionable acts if the gains are consequent enough.

Trench is smooth, manly and super-confident. His rough and virile mannerisms make him a hit with most ladies.

He tends to underestimate women, old people and children, though.

(About Diana’s karate) “All this jazz is re-e-al pretty, but I put my faith in a right cross an’ a lead pill.”

“Never yet saw a chick who wouldn’t be dumb if you give her the chance !” 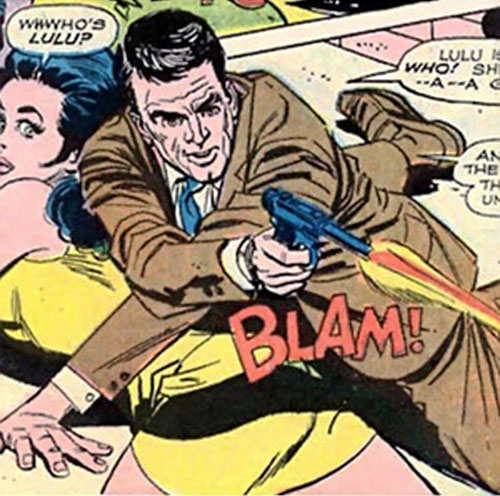 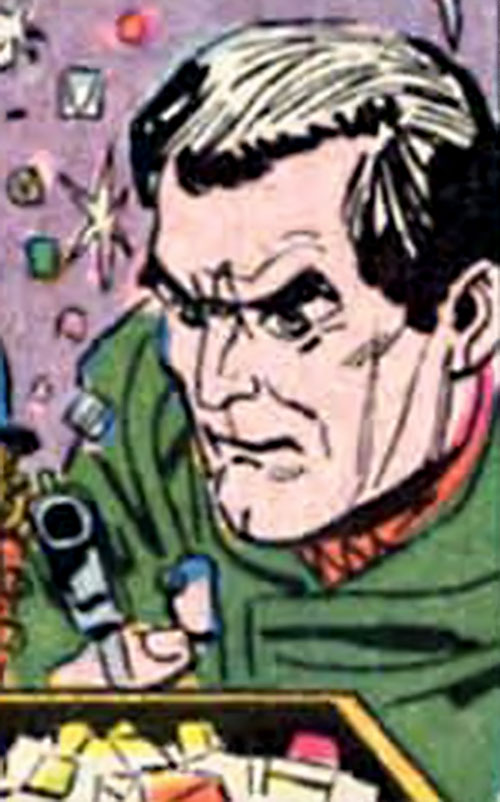 Trench as a younger man :