There have been other versions of the character, as starting in the 1990s the Legion went through several rounds of continuity upheaval. Here we’re discussing the classic, original version.

Timber Wolf has “partial super-powers” due to his father’s Zuunium ray.

His strength and reflexes are not far off Krypton-class  (in DC Heroes terms Dex, Str, Lightning Reflexes). He can move at super-speed and has supranormal agility and combat efficiency (Superspeed, Acrobatics).

Timber Wolf excelled at the Legion’s personal combat training (Martial Artist). However he rarely makes use of the suggested moves. Instead, he prefers to use his powers to their fullest with an acrobatic, unstructured fighting style that leaves opponents disoriented until the moment of impact.

He is at home in the wilderness, able to move swiftly, silently, and skillfully. He is also trained in using Legion equipment and flying Legion cruisers (Vehicles (Space)) though he’s far from being a top pilot.

Brin Londo was raised by his father on the planet Zoon, in the second half of the XXXth century – as an experiment. Mar Londo was working on a process to use the rare mineral Zuunium to give “partial super-powers” to a human subject—his son. The Zuunium ray did greatly increase the boy’s physical ability as hoped, but it apparently also weakened his mind.

When the senior Londo died, a crafty and jealous android called Karth Arn attacked Brin. Arn induced amnesia, and tricked him into believing Brin was the android, and Karth the son of Londo.

The “android” Londo nevertheless did various and sometimes spectacular good deeds under the alias Lone Wolf. But when the Legion of Super Heroes contacted him for membership, he refused on the grounds of his alleged inhumanity.

One Legionnaire, Light Lass, took an interest in the strange android. She was instrumental in helping him discover the truth and overcome the delusion. During those times they fell in love.

After therapy, Brinn, now calling himself Timber Wolf, entered and did well in the new Legion Academy.

Near his graduation, the story was given out that he had brutally betrayed the Legion. But he had in fact infiltrated the Legion of Super-Villains on behalf of the LSH. His actions during that mission allowed him to graduate and earned him Legion membership. 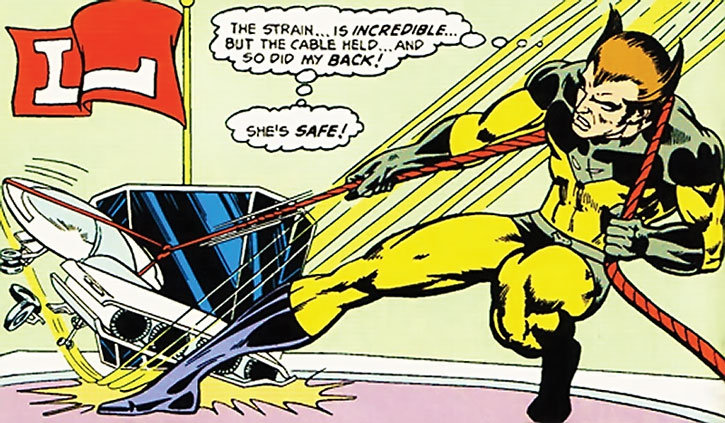 Over the years, Light Lass and Londo grew apart, partly due to Brin’s continuing identity problems and inability to fit in socially, which even led to a short period of drug abuse.

When Light Lass finally left the Legion she also left him, after giving him the opportunity to come with her. Brin, in a rare moment of clarity about who he was, told her that he was a Legionnaire, that he’d found his home, and asked her to stay. She left the Legion, and him.

Brin seemed to be adrift for some time after that, but has gradually been moving on with his life. He is currently dating a reporter named Marella Tao. Currently his closest friend is fellow Legionnaire Blok. He was also friends with Chemical King, his roommate at the Legion Academy, and was close to Ultra Boy and Karate Kid, as well.

Brin is a tall and well-muscled man, but lean and acrobatic. His hair is usually just a bit wild.

When he becomes over-excited he takes on a feral appearance, with red eyes, elongated canine teeth, pointed ears, etc.

Timber Wolf is not highly educated, nor very sophisticated – he’s a doer, not a thinker. He enjoys solving problems in simple, direct ways, without tortuous planning. He trusts his intuition and sees things others miss. He’s not as much of a loner as he once was, though he’s still not great in social settings.

His break-up with Light Lass seems to have stemmed partly from an inability to express himself verbally, which still causes him some problems. He’s much more comfortable with outsiders like Blok than with the other Legionnaires. The team is still very important to him, though. He thinks of them as family.

He can be sarcastic or abrasive at times, probably due to his social discomfort. But overall he’s a good, down-to-earth guy with a highly instinctual streak. He went on a nearly impossible quest to fulfill Karate Kid’s will, not because he wanted the money, but because there were a lot of lost and outcast kids who could use the help that kind of money could buy.

He still loves Lightning Lass. But as she has made it very clear that she will not take him back, he is trying to move on.

“I don’t want to be in your Legion! I’m a Lone Wolf, as the symbol on my chest indicates, and want no part of any organization !”

“I don’t care about rules. I was a loner before I joined your group, Lightning Lad. I can be a loner again. Now do you want my report or not ?”

“I’ll go first. There may be booby-traps ahead. And of us all, my skill and training give me the best chance to survive !”

Timber Wolf : “I tell you, Blok, our problems always seem to run around in packs !”
Blok : “Like wolves, my friend ?”
Timber Wolf : “Funny. You’re so funny.”

Blok : “What could be troubling you so ?”
Timber Wolf : “Only that my lady is quitting the Legion and gave me one day to decide whether to go with her. Either way, I lose one of the only two things that are worth anything in my life.”

Timber Wolf : “Listen, you pebble-brained moron, I don’t know why fate’s picked me to dump on. Maybe it got tired of thrashing Lightning Lad — but I need to work it out of my blood—”
Blok, grabbing Timber Wolf and forcibly seating him : “Shhh…Sit, my friend…This is the best part.”
Timber Wolf : “I DON’T BELIEVE IT ! I’m being held prisoner by a rock !”

“Ayla—I love you. I was always alone before you found me and helped me join the Legion. Now I’m not alone—I have friends, I have work that’s important—and most of all, I’m a part of a team—a family. Please stay.”

Computer voice : “Breep ! Alert in lobby area ! Breep !”
Blok : “Peculiar. Do you suppose the monitor system malfuncti—”
Timber Wolf : “Make you a deal, pal—you stay and check it out—and when you notice the walls are shaking, you can follow me.”
Blok : “Ahem. Sorry.”
Timber Wolf : “No problem, chunky—just move !”

There’s now a Timber Wolf character in the post-boot Legion chronology. I don’t know how he differs from this version, but there’s nothing I know of in the Post-Crisis or Post Zero Hour world that prevents you from using this version of Timber Wolf.

Just as an aside, I think GMs would be well advised to pull out the character of Karth Arn again. He’d be a good candidate for an archenemy from Timber Wolf. He was involved in the origin, he proved to be fairly clever and ruthless, and he has android analogues of Brin’s powers, so that he’d be a natural to show up again.

The pre-boot 30th century also seems to have some discrimination against androids, as witness the fact that they can be ordered into death situations with impunity. That’s not even mentioning the Probes from the Giffen and Bierbaums’ days.

None of this has (necessarily) a lot to do with Timber Wolf, but maybe it’ll give you some ideas for the richer possibilities of pre-boot history…

Bonuses and Limitations:
Superspeed only reduces the time for physical actions, not mental tasks such as calculations (-1 FC).

Bonuses and Limitations:
Acrobatics is a Powered Skill (-1 FC).

Born to be wild

Timber Wolf has very strong instincts, and has a tendency to trust those instincts over rational thoughts, orders, advice and the like. He will generally do the following (and has to roll against his SIA if he wants to resist the temptation):

As Lone Wolf, this was a CIA. It became a SIA during his Legion Academy days.

Brin Londo has an unusual Attack Vulnerability, which is due to his mediocre sense of identity. Any form of attack that aims to change the perception he has of who he is – such as Persuading him that he’s an android and not Mar Londo’s son, a Mental Illusion that he is a wild beast and not a human, Mental drain breaking down his id, etc. can exploit this Vulnerability.

The GM must determine whether or not an attack qualifies, based on its description – this is especially true in the case of Powers such as Phobia and Mind Blast.

By Sébastien Andrivet and Chris Cottingham, based on Paul Levitz and Steve Crow. 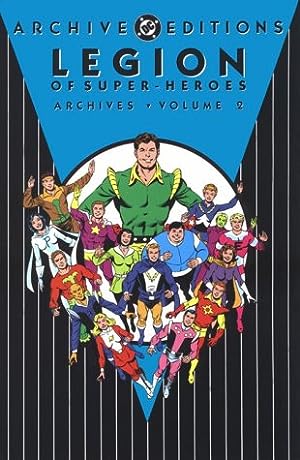 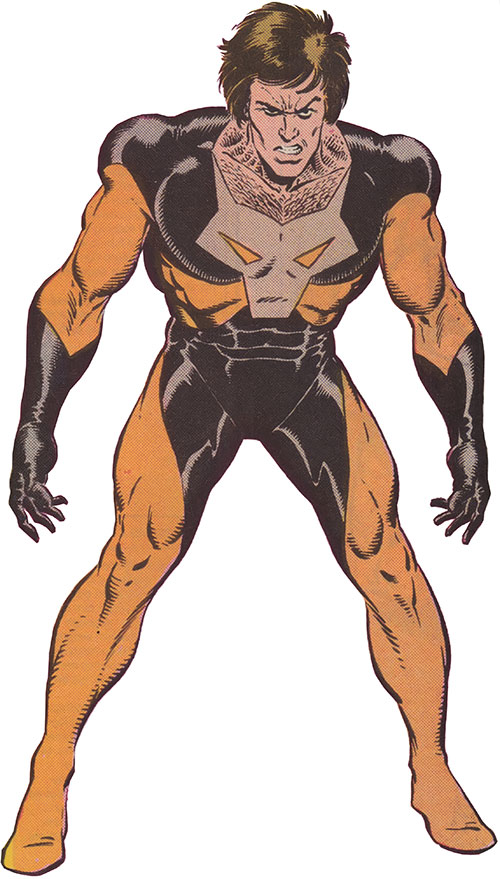 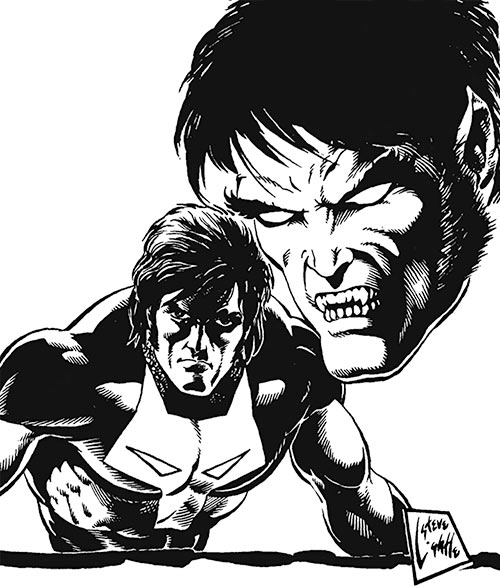 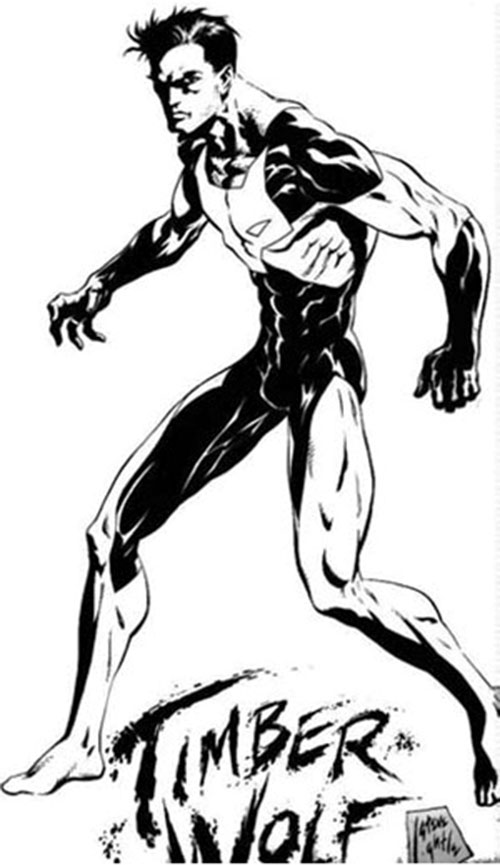 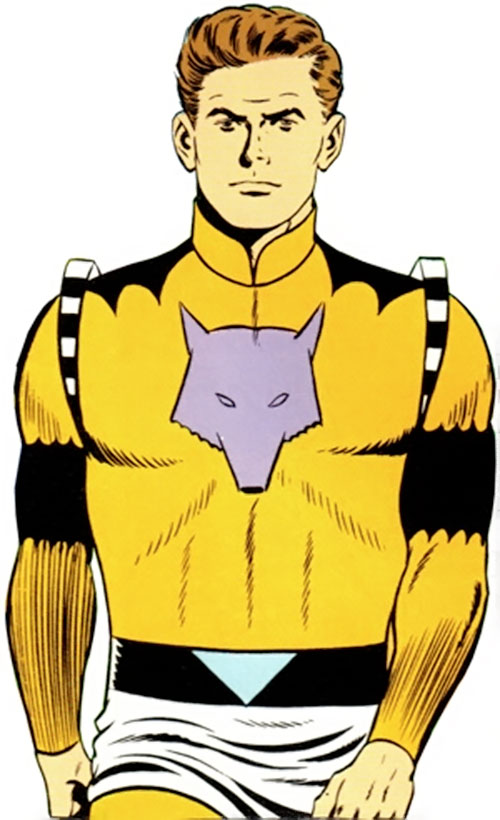 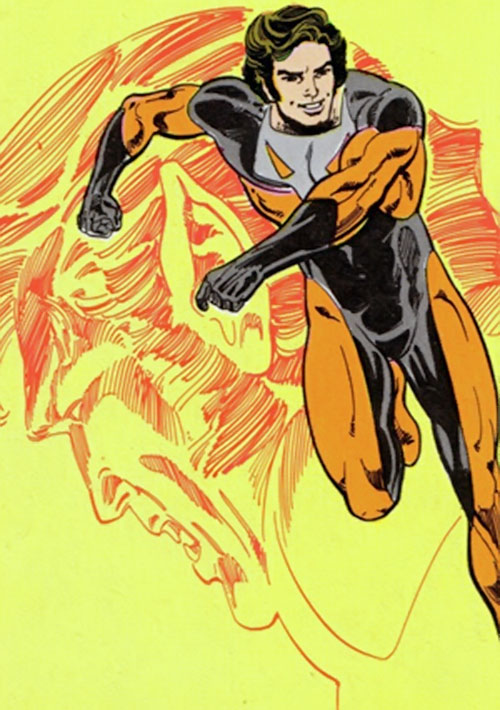 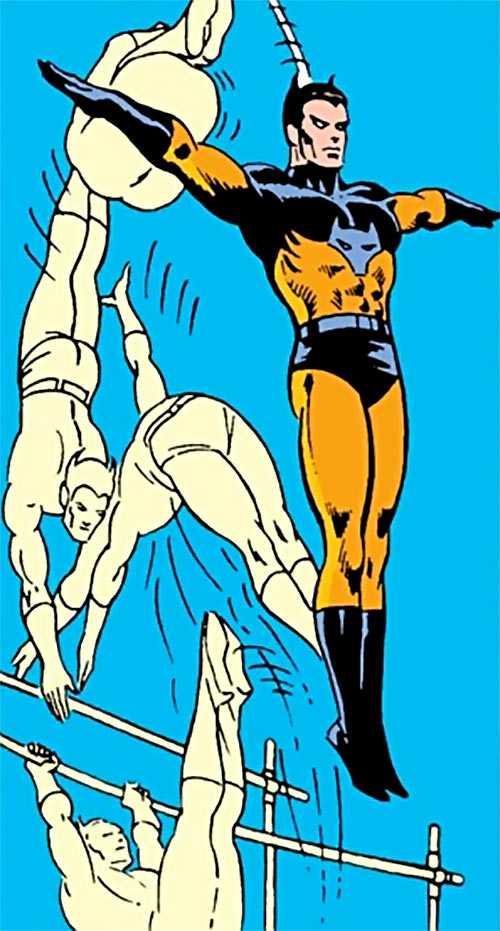 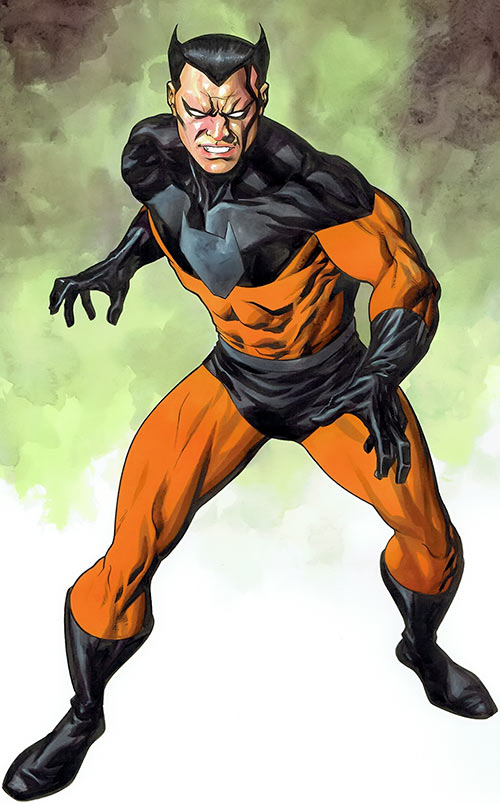