This is the protagonist from the influential, foundational, seminal 1895 H.G. Wells novel The Time Machine. There was sci-fi before (such as Margaret Cavendish in the 1600s, or Plato’s Atlantis stuff). But the turn-of-the-century wave with Wells, Jules Verne, E.R. Burroughs, Rosny Aîné, etc. was a big turning point.

The Time Traveller also appears in League of Extraordinary Gentlemen. It seems to be the exact same character, so I wrote an addendum rather than do a separate LoEG profile.

The man referred to as the Time Traveller (or simply the Traveller) is a natural inventive genius.

Even before achieving his masterpiece work on the time machine, he had invented a number of devices that would be still be impressive even a century later. One example is the special reclining chairs he designed that conformed themselves to each sitter’s body to provide a uniquely comfortable perch.

Though his primary interests lie in mathematics and engineering, the Traveller also kept up with studies on the social sciences. He applied these theories as best he could to understanding the future times to which he travelled.

As with most cultured men, the Traveller is proficient in some artistic areas as well, most notably dance. He is very fit physically as well as mentally, and was able to fight off multiple attackers at the same time when assaulted by the Morlocks.

The Traveller’s time machine is never explicitly described. But it resembles the miniature model the Traveller presents to his friends. It is a glittering metallic framework with bits of ivory and crystalline substances in it. Some of the crystalline material looks slightly odd, as if it isn’t quite real.

The actual machine is not terribly large, being described as a “squat, substantial-looking mass”. It could be moved by the efforts of several Morlocks, but its weight was sufficient to discourage them from dragging any further than was necessary to conceal it inside their caverns.

The time machine is made of numerous materials, including nickel, ivory, and rock crystal. There is a sort of saddle within the framework for the operator. There are two simple levers — one to go forward in time and one to go backward. The farther a given lever is pushed, the more quickly the machine moves through time.

Someone standing outside the machine as it activates will feel a gust of wind. The machine will seem to whir in place, becoming transparent until it finally disappears. For someone inside the time machine, they will see the world go by at high speed, as if watching time-lapse photography. Time travel in this machine is very unpleasant, almost like a feeling of falling helplessly.

The machine seems to have a maximum speed at which it can proceed through time – the lever can only be pushed so far. But there is no known limit to the maximum amount of time it can go forward or backward. The Traveller proceeded 30 million years into the future (48 APs of time) before deciding to turn back on his first trip.

The Traveller’s life up until the invention of his time machine is largely undetailed. What little is mentioned suggests a fairly ordinary life for a man of his talents. He was well known as a capable inventor and enjoyed the social company of colleagues in various other scientific fields quite regularly.

Given his demonstrations of great intellect, the Traveller’s unusual theories about mathematics and physics were seen as eccentricities rather than as objects of great scorn or derision.

It was the application these theories that first brought the Traveller to greater attention. One day he summoned a group of friends to his house and explained to them his theories of time as a fourth dimension contiguous with the three known dimensions of space. Moreover, he had designed a mechanical device that could exploit these theories to travel through time.

He demonstrated with a miniature device that disappeared when activated. It was moving through time at such a high rate of speed that it could no longer be seen or detected in any other way. His friends dismissed this as some bizarre trick on the Traveller’s part, despite their inability to work out the mechanics of this illusion.

A week later, the Traveller’s colleagues met at his house again for dinner, finding a note asking them to start without him if he had not appeared by seven PM. The servants provided dinner at the appropriate time and as the group was eating, the Traveller stumbled into the dining room, greatly dishevelled.

After eating dinner and cleaning himself, the Traveller retired to the smoking room and regaled his friends with his successful trip through time. Having completed the full size version of the time machine that morning, the Traveller had set out into the future, going forward to the year 802,701 AD.

There he encountered two groups, the simple-minded elfin Eloi who lived above ground and the subterranean brutish Morlocks.

After developing a variety of theories, the Traveller thought the strongest explanation for the state of affairs in that era was a progression of the gap between Capitalists and Labourers. “So, in the end, above ground you must have the Haves, pursuing pleasure and comfort and beauty, and below ground the Have Nots; the Workers getting continually adapted to the conditions of their labour.”

Apparently, The Eloi had dwindled in size, strength and intelligence. That presumably was because the “too-perfect security” of their existence protected them from any significant adversity. In turn, the Morlocks helped to maintain the Eloi by providing necessary materials from the ancient machines in exchange for occasionally feeding on the Eloi like livestock.

The Traveller ended up in this time for longer than he had wished. The Morlocks had stolen his machine was he was exploring, instinctively claiming the mechanism as theirs much like the underground equipment they maintained.

It took a week for the Traveller to reclaim his invention. It was a very near thing, ending with the Traveller struggling with the Morlocks in the stygian darkness of their caerns as he fought to recover the time machine.

At sunset of the eighth day, the Morlocks opened the base of the White Sphinx in which they had hidden the time machine. They were trying to lure the Traveller in so they could finally dispatch him. However, the Traveller managed to get to the machine and activate it before the Morlocks could capture him.

Leaving that era behind, the Time Traveller went further forward. He travelled 30 million years into the future, when the sun was a dim red giant and the Earth was cold and nearly barren. He then returned to his native time in the late 19th century AD only a few hours after he had left. Then he made his way to the gathering of his friends, where he told them his tale.

The next day one of the Traveller’s friends came calling to his house. They were hoping to be provided with proof of the Traveller’s tale. The Time Traveller had expected this and was in fact already planning to do so. The Traveller asked his friend to stay for lunch, at which point such evidence would be produced.

The friend walked back into the laboratory just in time to see the Traveller disappearing in his machine. His friend waited, but the Traveller did not reappear. Three years passed between then and the time his friend set down the narrative in print, yet the Traveller still had not been seen since that final day.

The Traveller has grey eyes and a pale face, with a noticeable flush when he becomes excited. He is lean and usually clean-shaven. His hair is beginning to grey, though the original color is still evident.

The Traveller’s mind is constantly active. Everywhere he goes he is constantly theorizing connections and suppositions regarding his circumstances. In some ways, his incredible mind made it difficult for others to completely trust him.

As the narrator puts it, “the Time Traveller was one of those men who are too clever to be believed: you never felt that you saw all around him; you always suspected some subtle reserve, some ingenuity in ambush, behind his lucid frankness…(he) had more than a touch of whim among his elements, and we distrusted him.”

An insatiable curiosity constantly drives the Traveller forward. Frequently with no thought to his own safety until the presence of a potentially serious threat is very obvious.

Though the Traveller often faces danger with courage, he can be shaken by profound menace. He became upset when his time machine disappeared and came close to panic during the final moments of his battle with the Morlocks when he retrieved his singularly wondrous invention.

“You must follow me carefully. I shall have to controvert one or two ideas that are almost universally accepted.”

“And so,…to Weena’s huge delight, I solemnly performed a kind of composite dance…In part it was a modest cancan, in part a step-dance, in part a skirt-dance (so far as my tail-coat permitted), and in part original. For I am naturally inventive, as you know. ”

Perhaps the Time Traveller disappeared simply because he became caught up in studies that have so engrossed him. They might have consequently altered his perceptions that he no longer feels at home in his native time period. This seems to be the case in his appearances in the League of Extraordinary Gentlemen short story Allan and the Sundered Veil.

The Time Traveller may have worked with DCU groups such as the Linear Men when various problems with the time stream arose. Yet, he’s more of a solitary explorer interested in scientific study than an adventurer interested in excitement. Thus, it is unlikely that he have remained with such a group for long. He might be strongly tied to such organisations nevertheless.

For example, the Traveller may have come across some villain’s machinations and recruited other time travellers to assist him in ending the threat. After forming the Linear Men or some other like group and resolving the “present” threat, the Traveller might have left to resume his studies while the ad hoc group became a more formal organisation.

During a taduki-induced astral trip, Allan Quartermain (who would later join the late 19th Century gathering of the League of Extraordinary Gentlemen) met with the Traveller some time after the events of The Time Machine .

At that time the Traveller had built a headquarters in the White Sphinx he had discovered his trip to 802,701 AD. But he did so in a later time period when the Earth was virtually barren of life (in DC Heroes RPG terms, add Expansive HQ — Sphinx).

He had also become much more familiar with the intricacies of dimensional travel. Plus some of the things that lay just beyond the common ken of mankind. Add Occultist (Occult Knowledge): 04 and Expertise (Cthulhu Mythos) and add Dimension Travel (Travel Only): 06 to the Time Machine.

Connections:
Local scientific community (In his own time only, High).

It should be noted that it would be virtually impossible for the Traveller to have acquired the Hero Points necessary to construct the time machine using the Gadgetry rules if it weren’t done as part of his origin.

Source of Character: The Time Machine by H.G. Wells (novel), Allan and the Sundered Veil (League of Extraordinary Gentlemen tale). 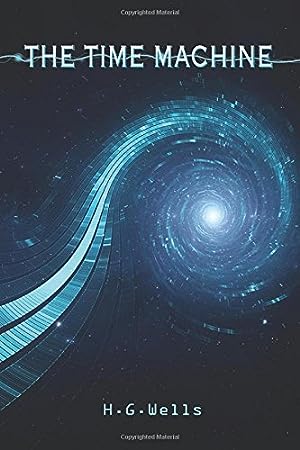 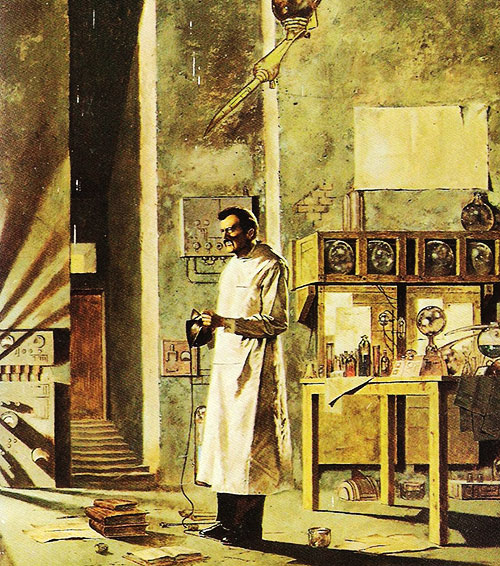