Timeshadow seems to be a fit man, trained to fight. Given the location of his first appearance, the stats assume that he has a military background. This is an unsupported hypothetical, but it doesn’t have much impact anyway.

Timeshadow can displace himself in time a millisecond at a time, vanishing in the time stream and popping back. He can do that in rapid succession. The actual applications have been:

Timeshadow was one of the mutant mercenaries assembled as the Alliance of Evil. These were to serve Apocalypse against X-Factor.

Along with the Alliance and under demonic influence from the Inferno invasion, he later rioted against the Mutant Registration Act. Timeshadow hasn’t been seen since, and was not part of the version of the Alliance that worked for A.I.M..

Since he was a patient in a US military detoxification center when he encountered Michael Nowlan, it is likely he was some sort of soldier before he became a merc. Perhaps he was handed back over to the US military.

Along with Frenzy, Timeshadow was one of the professionals within the Alliance of Evil. He seemed calm and capable.

Timeshadow being limited to hand-to-hand attacks, he focuses on whichever opponent seems to be the least tough physically.

Although he makes a show of having a potent power, he’s actually cautious. His tactic against Marvel Girl was to Lay Back and surround her with illusory forms to see what she would do. Meanwhile, his real form stayed behind her. After she unleashed a telekinetic barrage he moved in to clobber her from behind, using Martial Arts EV and the Blindside his tactic had gained him.

“Calm down, little girl ! You might accidentally kill him if you throw one of your bolts !”

“Timeshadow’s the name, woman ! Even with your formidable abilities, you can’t possibly distinguish my phase-forms from the real me ! I’m always a millisecond ahead of you !”

Bonuses and Limitations:
Martial Artist is a Powered Skill and is Contingent upon Illusion.

When receiving a boost from Michael Nowlan’s power-enhancing mutant ability, the canny Timeshadow chose to enhance his Powered Martial Artist Skill to 08. 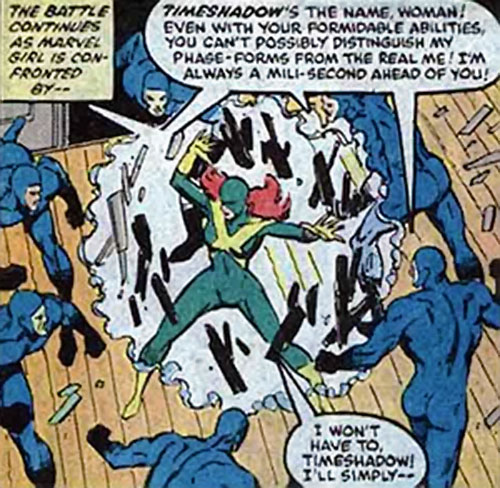