Ravenwind could change people into flowers, or demons into frogs. In game terms, this means first using an invisible magical attack, then morphing  the corpses.

In other cases it was Hypnotism that was the carrier for the Shape Change, used on others.

He also cast less spectacular spells. He likely has a fairly significant répertoire of Rituals, and knows a little about many dimensions .

The Ravenwind family has traditionally lived in Divinity, Maine. This is a small coastal village, founded circa 1648. However, their relationship with the village had always been bad. Even well unto the second half of the XXth century, they were still regularly accused of witchcraft.

When the first Ravenwind was burned at the stake by a member of the Gideon family, a man missing his right leg, she cursed his descendants so suffer the selfsame affliction. All Gideons since missed their right leg. This prompted them to order the burning of more Ravenwinds throughout the generations.

My name is… Tim

By 1973 the villagers chased and caught two people who were apparently the last Ravenwinds. These were Rebecca, a young woman, and her kid brother Timothy, who appeared to be mentally handicapped. Rebecca was accused of witchcraft, in part because she had a bountiful farm while her neighbours struggled to grow anything.

The mystically-gifted Timothy had been channelling his empathy with, and control over, plants through his sister. Timothy’s simple-minded behaviour seemed caused by his perceptions being split between the normal world and the Green. Beyond soil fertility, he mostly used his magicks to conjure up pretty flowers.

The Swamp Thing stumbled into Divinity. After the Ravenwinds helped him recover from nearly drowning, he decided to help them back. He rescued Rebecca, who then channelled Timothy’s powers to trigger a lightning storm, disintegrate a pitchfork that was thrown at her by the Gideon patriarch, and turn the men trying to burn her into flowers.

After thanking the Thing, the Ravenwinds left to find refuge with friends in Boston.

Rebecca, like many of the Ravenwinds, later died of cancer. Later on, Timothy would develop tumours of his own.

Agent of the Lodge

Timothy grew up, and stopped coming across as simple-minded. He joined some organisation called the Lodge, to which John Constantine seemingly once belonged. But the Grandmaster of the organisation eventually ordered him to become a criminal and bank-robber to fulfil his own obscure agenda.

This lodge opposed another lodge, who considered mankind to be diseased and to be replaced by something — anything — better. The lodge to which Ravenwind belonged wanted to inspire mankind to greatness, and used any means, no matter how unspeakable, to oppose their rivals.

In an attempt to deconstruct his ego to further his magical inner journey, Timothy also took a job as a waiter in a restaurant for demons and other magical beings, the Bewitched.

When the Swamp Thing started becoming a god and taking over Earth, the Phantom Stranger summoned Timothy Ravenwind (now calling himself Timothy Raven) and John Constantine for help.

Raven was put in contact with the military forces preparing a strike against the Swamp Thing. The Stranger also tasked him with summoning the spirit of Anton Arcane, a terrifying evil feared even in Hell where he currently resided. Raven succeeded and courageously let Arcane possess him.

However Arcane, the most evil of men, had found God in Hell. Though he initially failed to persuade the Swamp God to renounce his goals, he cured Raven’s cancer before departing his host’s body. Eventually, Arcane’s words found their mark within the thoughts of the World Elemental, and humanity was saved.

In 2005, Ravenwind was one of the hardened magicians who had visions of the incoming Harrowing. He and the Invincibles joined Zatanna (with her guest Doctor Thirteen) at the house of Baron Winters for a seance. They attempted to make sense of the situation and procure the four lost books of Zatara.

To facilitate this, Zatanna sat at the very place where her father had found death during the Crisis on Infinite Earths. His burned form was still etched on the seance table. Ravenwind introduced himself as a commando from the Spectral Services and seemed to be a friend of Zatanna.

The seance went extremely wrong. They made contact with Gwydion, the Merlin sprite Zatanna had previously accidentally summoned. All save Zatanna were incinerated.

It was later revealed that the Invincibles had barely survived. The Ibistick recomposed their body, taking them into another dimension and eventually getting them into a restorative trance.

It is possible that Tim was likewise saved. Especially since Zatanna said she wanted to use her magic to “put it right back again”.

Raven used to dress like a stage magician (à la Zatara) and to smoke. Later he started wearing a tuxedo, did not smoke anymore and had an unusual haircut.

Timothy Raven appeared to be uptight and deferential toward authority, openly disliking fools such as John Constantine. He was also pompous and came across as extremely confident, but that sounded like overcompensation. His arrogance generally seemed limitless, and he thought of himself as a world-class magician and unable to be attracted toward anybody with an IQ below 180.

He also stated he was bisexual and complained about ’bloody Americans’, apparently thinking he was British. It… it did not make much sense, honestly. It just seemed like an edgy collection of random character traits thrown at the wall, with nothing sticking.

In 2005, there was little common ground with the man that was seen before. He came across like a hardened agent/paramilitary type with extensive familiarity with other dimensions and paranormal threats. He seemed to be a friend or even some kind of colleague of Zatanna.

Perhaps his life completely changed after he was cured from cancer.

“Your inane attempts at humor are becoming most tiresome, Constantine. Observe how I sit and absorb the silence as we wait for our host to arrive. You would do well to follow my example.”

(About Constantine to the Stranger) “Pay no attention to him, my friend. This mannerless oaf has no grasp of our mission’s importance, and no respect for authority. I recommend we proceed without the limited skills he has to offer.”

“Then be glad the finest minds on the planet are assembled against him, Doctor Woodrue. Every possible action has been anticipated. We’ll be ready for him when he makes his first move. You’re dealing with professionals now.”

(As a waiter) “Forgive my tardiness, sir. I spotted a friend at the next table and found myself riveted by his conversation. Feel free to request my dismissal from the management when you’ve finished your meal.”

“Timothy Ravenwind: Spectral Services commando. I’m for grabbing them by the grimoires and bombing the bastards back to octi-dimensional Hell. Gently, of course.”

“There’s something bad about this place. It’s hungry. It’s like those ghosts on the Daathian frontier, where thoughts are food.”

Drawbacks:
MIA toward pomposity and overconfidence, Misc.: The Ravenwind line has a genetic predisposition toward cancer. 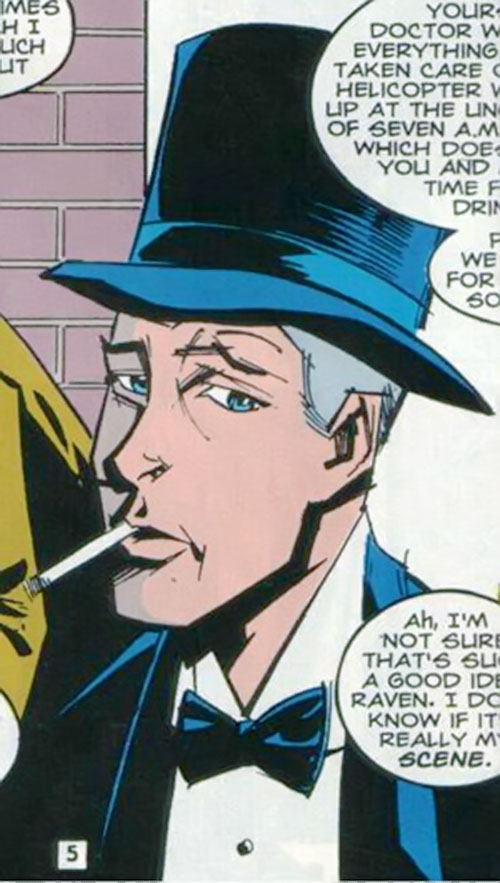