Titan was a “failed Superman” type (though back then that was less cliché). He played a central role in the main crossover story across the imprint, Will to Power.

As his madness took hold, his power levels increased. Near the end they were almost Kryptonian-class .

Titan was born powerful. He never had a normal childhood – especially since his military father gave him a very tough education, and beat his mother. While seen as different, and persecuted by the other boys during his childhood and adolescence, he never dared to hit them back. He used his abilities to flee instead.

When his father died in the Việt Nam war to a sniper’s bullet, Frank didn’t mourn him. Still, he couldn’t fit at all. Eventually, he went a bit crazy. Frank invaded a football field in order to prove his worth by scoring a goal. He then fled blindly, leaving behind two teams of badly wounded teenagers.

Wells drifted a bit then went to Golden City. There, Grace made him into a hero, Golden City’s first actual superhero. The young Frank Wells was delighted he could fit in, and was somewhat in love with Grace. He was viewed by all as an All-American mainstay of justice and old fashioned values.

After his first year, he received — solely for marketing and PR reasons — a sidekick named Golden Boy. The kid was completely out of his league, of course, and ended up being tortured and losing an eye. The then-mayor of Golden City, Grace, retired Golden Boy.

A few years after that episode, and in the ninth year of Titan’s career, Grace declared Golden City’s secession from the United States. After she won this battle, Titan left. 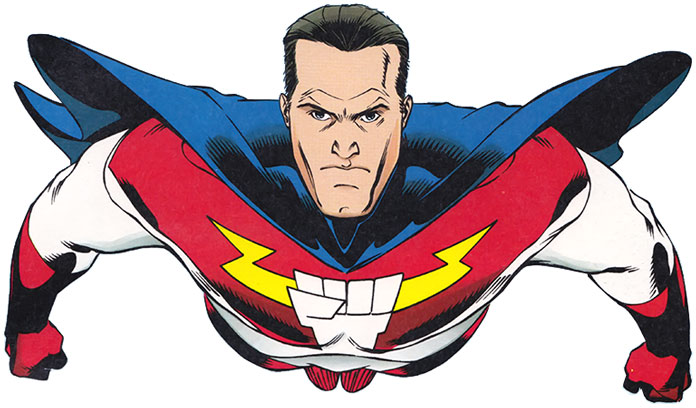 He took his decision after a fight with Rebel over Rhapsody’s death. But in any case, Titan could not stay in Golden City after its secession. Due to his patriotism, fighting US forces had been hard for him, and he didn’t approve of Grace’s methods. This disagreement even led to a bitter fight, which Grace won.

Besides, Grace had negotiated a deal in which included giving Titan back to the US. This was a part of the peace package between the US and Golden City. The superhero went to work for the National Security Council . The NSC immediately began to manipulate him and using him as a strong PR tool.

The accumulated frustration and neuroses finally got the better of Titan. During a mission in Arcadia, he began to see that the world was far more complex and gray than he thought. His next mission in Steel Harbor had him attempt to impose a deluded justice on the whole town. Wells stopped listening to reason. 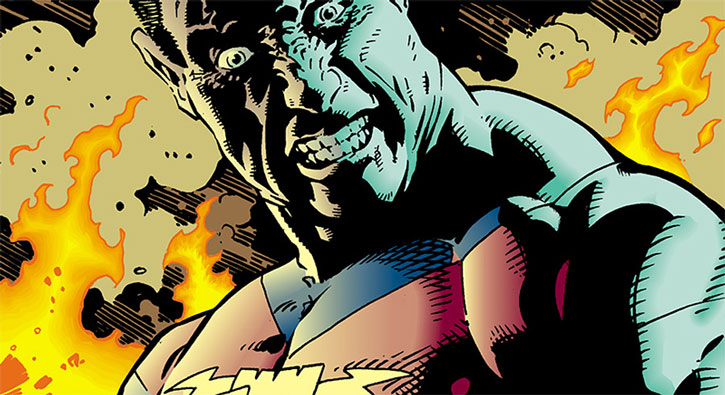 He was teleported out by Grace, on the request of the US government, before he could fight Motorhead and inflict untold damage in so doing. Mental scans by Madison revealed that Titan’s dreams were to kill the Agents of Change and break Grace to his will and a fight ensued.

However, the mental blocks that prevented Titan to access his full might were breaking down with his growing frustration and intensity. Thus, he became too much even for Grace to handle. Grace, knowing of the Vortex, led him to Cinnabar Flats to make him fight the Man from the Vortex.

However, the alien scientist refused to intervene until his human friend, Lieutenant Anderson, was killed. She was collateral damage from Titan’s destruction of the armored forces at Cinnabar Flats.

Vortex started to fight Titan. Meanwhile the mysterious King Tiger reached the scene of the fight with his bow and a magical arrow. After Titan had stunned Vortex, King Tiger shot Titan in the chest and killed him. However Titan’s new healing factor had him rise again, only to be killed by the alien from the Vortex.

During Titan’s autopsy, his powers were mysteriously transmitted to a special agent named Bert. Bert was a chain smoking operative working directly and personally for President William Clinton .

Titan was a iconic-superhero-wannabe who was screwed by reality. Gifted with tremendous powers and an indomitable will, he had a very white-and-black world view. He also thought of himself as always right. He never questioned this world view, and acted with a self-confidence bordering on impulsiveness. Wells was unable to understand complex situations or think things through.

He also had trouble understanding evil and brutality, or the notion that he could be deceived. Thus, the government found it rather easy to manipulate him.

Underneath all the willpower and heroic posturing, Titan was still scared by his unique childhood, disastrous homelife and deep-sated neurosis. His habit of calling most men “son” is interesting when viewed in that light.

When he broke down, his behaviour was that of a teenager having a huge power trip that grew progressively worse and more and more psychotic.

(Standing there unable to think about what he should do) “H-How… How could you threaten an innocent girl ?”

“If this country needs a hero to solve its problems, then I’m just the guy to do it”

“I am Titan. Drop your weapons and surrender to me now. Negotiation is not an option.”

In the DCU, Titan could have been the fifth Superman-wannabe after the Death of Superman arc – the most successful of the Cadmus clones. He would have become and idol until he blew a fuse, and was hunted by Wonder Woman, Green Arrow and the Martian Manhunter.

As mentioned for the other Agents of Change, Golden City can also be imported to the DCU for an interesting JLA type scenario.

Connections:
Agents of Change (High) ; Golden City (High) ; Grace (High). Later all of those became Low contacts and he gained the NSC as a Low Connection.

During the Will to Power Limited series, Titan’s physical power started increasing at a steady rate as he became more and more unstable. By the time he was in Arcadia, his DEX was a 06, his STR was a 19 and his BODY a 15 (he also had 85 HPs). In Steel Harbor, his DEX was 07, his STR was 20 and his BODY was a 16, enabling him to beat both the Wolf Gang and the Prime Movers (he also had 95 HPs).

His Rage and Psychological Instability likewise grew until they were both Catastrophic at Cinnibar.

As his sanity unravelled, his motivations changed. In Arcadia, he wanted to make everything right. In Steel Harbor, he was sick of the deceptions and wanted instant justice through his own might – even as he was manipulated by various forces.

In Golden City, his goals had degenerated to breaking Grace and making her submit to his will as the strongest man in the world. In Cinnabar, he was mostly an homicidal maniac that left nothing living in his path. 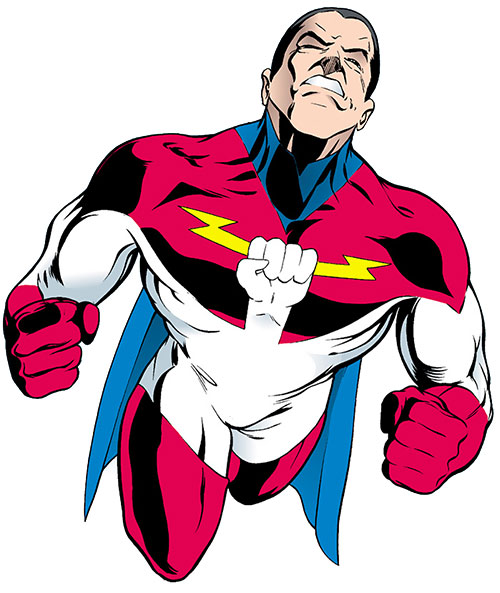