Titan is capable of generating a stone-like shell. Closely resembling granite, it encases his entire body from head to toe, by force of will alone.

While encased in his stone-like outer shell, he retains his normal human reflexes, speed and mobility while gaining all the physical properties of stone. That grants him:

The superhuman gangster Titan’s story is a warped reflection of the American dream. From humble beginnings, Titan clawed his way up the criminal hierarchy until he became the leader of a powerful criminal cartel.

Although Titan has super-strength and a rocky hide, he owes his meteoric rise more to naked ambition and cunning than physical force.

Aside from his extensive criminal record, little is known about Titan. At some point he ambitious young street criminal caught the attention of the gang lord Machine Head. MH made Titan a member of his crew.

For years, Titan performed Machine Head’s dirty work. Thus, he earned the gangster’s trust while plotting his demise. One night, Titan lured Machine Head into a New York City park and sprung his trap. The immensely strong Titan beat Machine Head severely. He would have killed him were it not for the timely intervention of a band of professional heroes from Capes, Inc..

Titan escaped, but he had squandered his one chance at eliminating Machine Head.

Cast out and on the run from Machine Head’s killers, Titan still clung to his dream of criminal supremacy. Working with a traitor within Machine Head’s gang, Titan devised a new plan to depose the king of the underworld.

Titan gained the trust of Invincible. His goal was to manipulate the young hero into conflict with Machine Head’s cadre of superhuman bodyguards. Titan convinced Invincible that, although he had not reformed, he sincerely wanted to bring Machine Head to justice.

Together Invincible and Titan burst into the master villain’s headquarters and battled his bodyguards. The new Guardians of the Globe joined the fray. The heroes ultimately prevailed. During the battle, Machine Head’s teleporting majordomo Isotope vanished when his boss needed him most. The gangster was found hiding under his desk.

Invincible and the Guardians seemed satisfied that Machine Head’s criminal empire had been decapitated. But in the shadows, aided by the traitorous Isotope, Titan seized control of the underworld empire. Titan’s ambition and drive had paid off.

From that moment, he secretly controlled the largest criminal organization on the North American continent.

Unknown to Titan, when he usurped Machine Head’s power, he also took his seat in an international criminal organization called “The Order”. Like any large organization, the Order demanded a percentage of its members’ time and resources. Titan decided that his membership in the Order was too expensive and more work than it was worth. 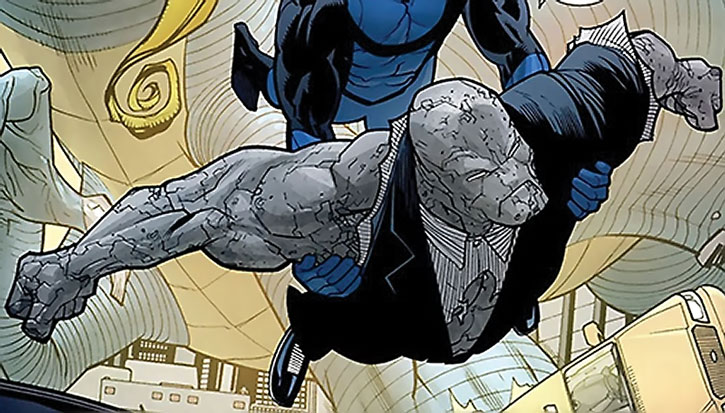 When he decided to severe his ties with the Order, its remaining members decided to remove him from power. The Order sent two of its top enforcers to North America to murder Titan. A short but explosive battle broke out in the streets of New York City.

Unfortunately for Titan, the hero Invincible was receiving counsel over murdering a man to prevent further bloodshed from his old government handler Cecil. Cecil was informed about the altercation. Unable to stand idly by, Invincible immediately set out for New York City and found the battle in full swing.

Invincible, being already frustrated and on edge from his previous battle, made short work of all of the villains involved, including Titan.

At the conclusion of the battle, Titan found himself in government custody once more.

Titan is an attractive Black man with close cropped hair, brown eyes and thick lips. He has a massive build, reminiscent of a football linebacker or a professional wrestler.

Before usurping Machine Head’s position, he was rarely seen wearing anything but a pair of black slacks and shoes. Afterwards, he has never been seen in anything other than a black three piece dress suit.

When Titan triggers his powers, his body is encased from head to toe in a granite-like substance. When initially generated, his stone like husk has no points of articulation. Once he begins moving, the shell cracks at the joints and at any point of flexion.

The shell itself is fairly thick. But it only covers Titan’s skin and as such will actually form underneath anything he’s wearing. Because of the sudden change in his body size, Titan’s clothes are often ripped/destroyed after his transformation.

While he is definitely a criminal, Titan is not a particularly debauched or corrupt man. He isn’t a psychopath craving death and destruction, or a man hellbent on vengeance.

He’s simply a man that craves money and power. And he realizes that it is easier to get it by exploiting the weakness of the men around him rather than walking on the path of righteousness.

Like a less refined version of the Kingpin, Titan is a “ruthless, charismatic, gifted tactician and strategist”. He will stop at nothing to expand his power base. In the Invinciverse, he is the top dog in the world of organized crime.

His criminal organization is vast and powerful. Under normal circumstances he operates through proxies (men like the Tether Tyrant, Kursk, Magmaniac, or even Invincible). But when push comes to shove he is unafraid to dirty his own hands.

Despite this, Titan avoids conflict with the super-powered heroes of his world. From past experience, he knows that constant fighting with the heroes is a losing proposition.

“You mean go straight ? You don’t really get it, do you ? You guys risk your lives for nothing… It’s dangerous. Every one of your villains is out to kill you. As long as we don’t get too wrapped up in revenge, and start wasting our time going after you guys… our lives are carefree.”

“We just steal stuff, tear stuff up, and have a good time. Every time one of you heroes comes after us, we know you’re not trying to kill us. The villain side of this is RISK FREE, until they start building better prisons, that is… ”

“The side of angels is for rubes, my friend. It’s a fool’s game. You’ve got everything working against you.”

“You’re saying ‘thwarted’ now ? I expected better from you, kid.”

“This is simply a dispute over my territory. You don’t want to get involved. The less you know, the better. Trust me.”

Titan can be inserted into the DC Universe relatively simply. He could be the new up and comer in Gotham, seeking to take out Two Face, Black Mask or any of the other Bat-foes that lead large criminal organizations.

He could also have been targeting Bruno Manheim during the Intergang days in Metropolis, bringing him to the attention of Superman.

Bonuses and Limitations:
Density Increase is already figured into stats and is always on.

Crack in his armour

Titan does not possess the ability to repair his outer husk if it is damaged, cracked or chipped and must shed the shell entirely in order to generate a new, pristine one to replace it.

When Titan reverts to his human form, he loses access to all of his powers, and his STR and BOD are reduced to 04 APs. 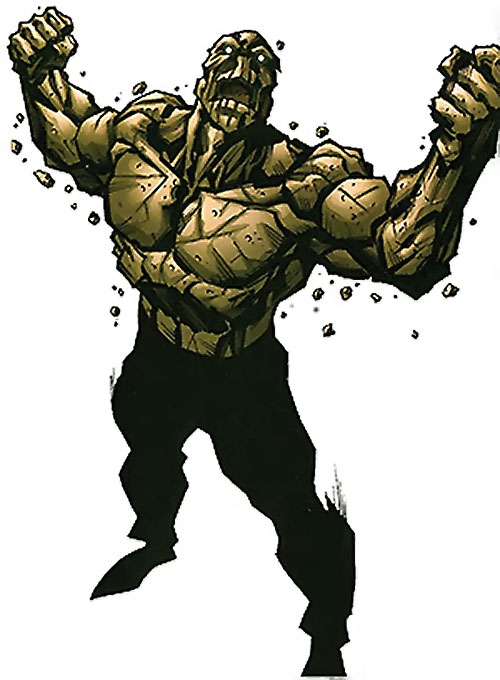 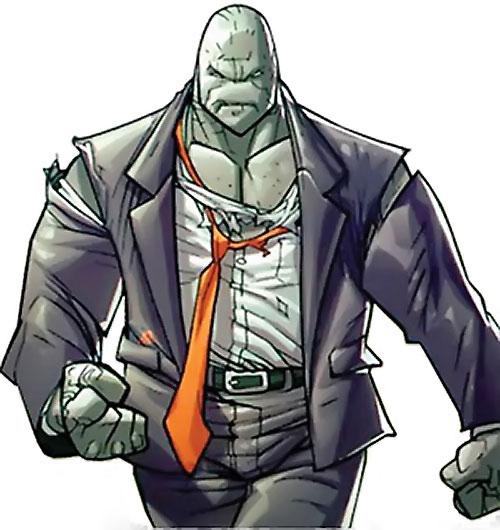 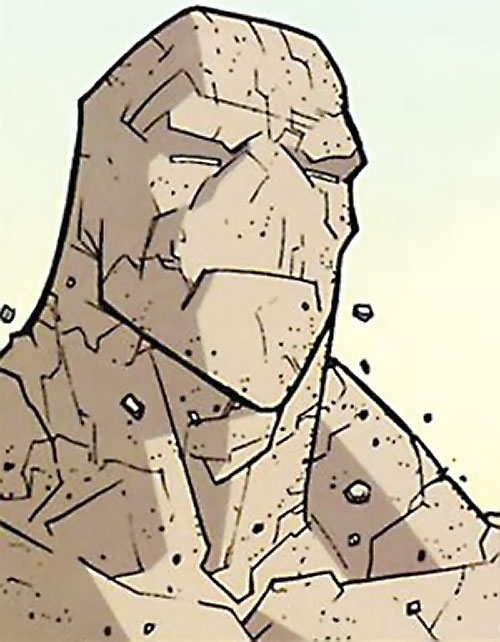 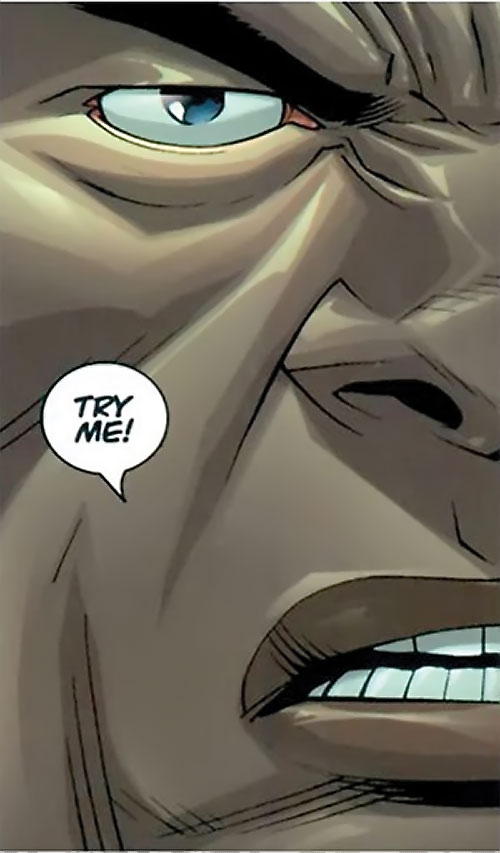 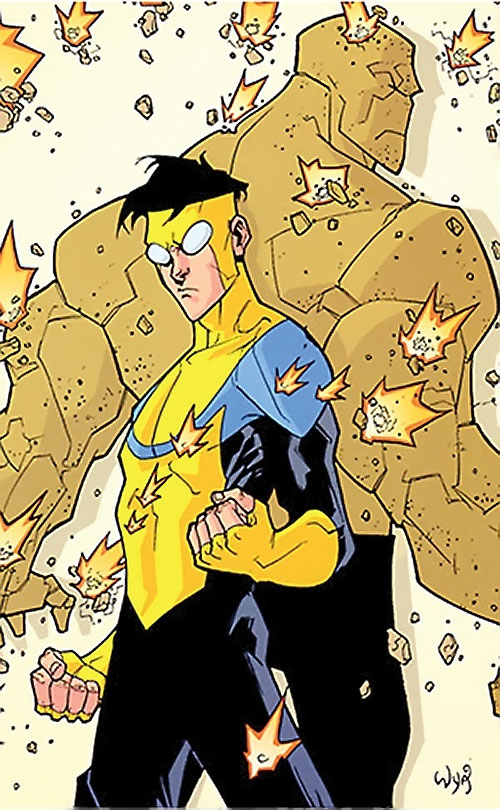 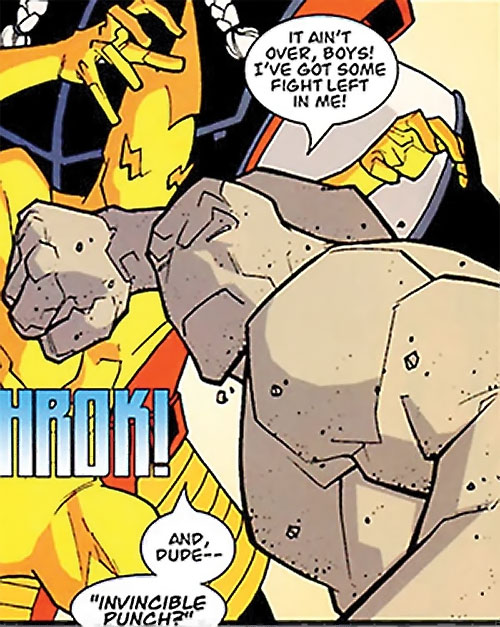