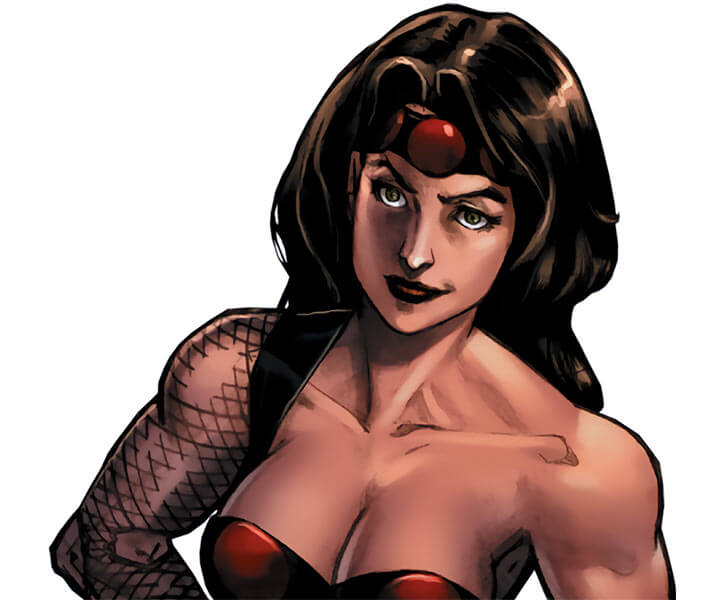 Titania was noted for her presence. That is, her ability to work crowds, play out wrestling storylines, give in-ring speeches, deliver taunts, etc..

The discs were *apparently* used for sabotage, by slipping them into machinery. Which means they have some sort of timer. 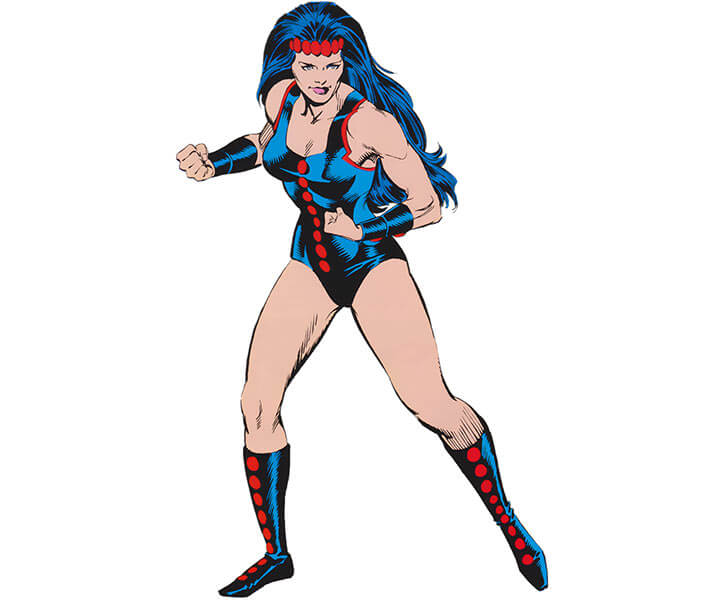 She was recruited to train at Auntie Freeze’s wrestling school. DeVito then led the Grapplers – her fellow graduates.

When the UCWF created its women’s division, Titania held the championship belt for a while.

However, she was defeated by Battleaxe (Anita Ehren). Who had considerably greater mass and superhuman strength.

Ms. DeVito thus lost both her title, and her position as leader of the New Grapplers. In a rage, she attacked Ms. Ehren after the match was over. They had to be separated by the Thing (Benjamin Grimm) and other Grapplers.

Angry and dejected, Ms. DeVito stormed off to take a shower. But she was murdered there by Caprice (Kendra Price), one of the Scourges of the Underworld.

In 1993, Titania’s shade was glimpsed among the dead, discussing with the 1940s Whizzer.

Can’t keep a bad girl down

After she was resurrected by the Hood, Titania changed her name to “Lascivious”, based on her new powers. While DeVito was dead, the Titania moniker had been claimed by the far stronger Mary McPheran-Creel.

Though Letha returned to New York City in 2017, Lascivious wasn’t with her. Presumably, she decided to remain in Bagalia.

DeVito’s weight is listed as 194lbs. (88Kg.) in secondary sources  . I assume this is a typo, and listed her as being 149 lbs.. It seems unlikely that her body density was increased, especially since Letha (who received similar augmentations at all stages, and is just 2″ shorter) is listed at 145 lbs. (65 Kg.).

After her resurrection, DeVito’s skin was markedly paler. Since she already had long black hair, she eventually added a torn fishnet sleeve to her costume. As a nod toward goth girl aesthetics.

But her skin gradually recovered its usual tone.

When she uses her emotion manipulation power, her eyes glow a bright green and she speaks in a demon voice. The eyes of her target also become green.

She briefly switched to a so-so costume with a boobs window. That was soon phased out. 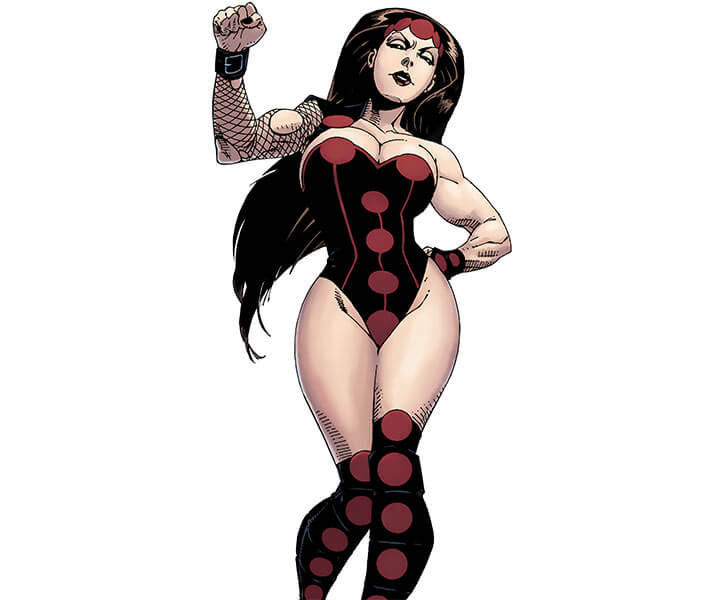 As Titania she was proud, dominant and aggressive, and hated losing a fight.

She was reluctant to use equipment, as she wanted to demonstrate her martial skills.

After her resurrection, DeVito was uncharacteristically quiet. One imagines that she was struggling with the “demon static” within her head. She therefore let Feliciano take center stage, and looked a bit as if she were dealing with a constant migraine.

On the other hand, the limiter on her domineering character burned out. She gleefully, cruelly used her psychic power to crush and humiliate. Though she was much less murderous than the enraged Letha.

Ms. DeVito seemed traumatised by her experience of death, which she referred to as “the darkness”. That made her emotionally dependent on Letha, as she needed her friend’s support to maintain a degree of mental health.

By early 2011, she had finished recovering. Ms. DeVito now behaved much like her old self.

Once in Bagalia, the pair seemingly caroused all the time. They essentially lived in pubs. They drank lots ‘n’ lots of liquor and had sex with terrible dudes. For *years*.

Maybe they simply loved to party, maybe they had to deal with trauma from their demonic resurrection, maybe both.

(To Thundra) “Red, I owe you a little something after the way you tossed me around the gym the other day.”

(As the Black Goliath appears) “Whoah ! Poundcakes, get a load of Bobo Brazil  ’s big brother !”

“Get your paws offa me, you big jerk – before I bite your thumb off !”

(As Lascivious, demon voice) “You *love* me, Desmond. Deeply. You *lust* for me. I’m your entire world. Nothing else matters […]. On your knees. Love is not unconditional, Desmond. Beg me for it. Plead like a dog.”

I suppose that Titania’s Female Fury equivalent might be Bernadeth, though this is the least convincing equivalency.

She was likely more envisioned as a Big Barda analogue. Hence the 6’1″ stated by the writers, ja ? 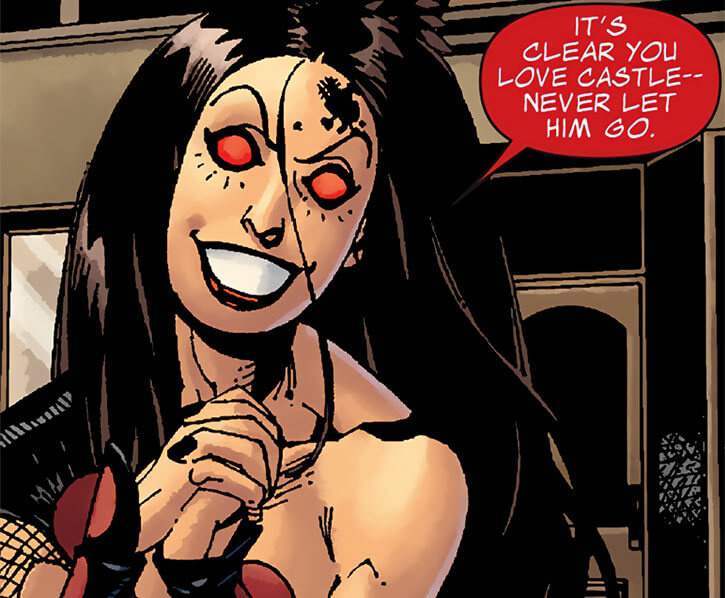 Before the Roxxon enhancements, her Physical Attributes and her Skills likely all were one AP lower (except for Vehicles). Ditto for her Wealth.

The Blast Rod’s Diminishing and Ammo are arbitrary.

Stats are even more arbitrary for the mini-discs, which are never actually seen or used. Presumably it was part of Gruenwald’s concept for Titania (he co-created her with Macchio (no relation)) and he only got to mention it in the OHOTMU.

Vehicles (Land) is assumed. She’s from Maine and lived in L.A., after all.

Her BODY remains a 05, but she gets the Conditional Soaking (Blunt, Unarmed) Advantage. She keeps her HPs for that, allowing her to go the distance even against superhumanly powerful blows – to everyone’s surprise.

No Equipment, but the rest seems unchanged.

Broadcast Empath: 05, limited to feelings of love, lust and adoration. But her track record is weird, so some *tentative* notes here :

Both Lascivious and Letha were weirdly effective against Spider-Man (Peter Parker), who normally resists mental effects quite well.

Since it also worked well on Bird-Man, perhaps people with a link with magical animal spirits have a -2CS OV/RV Attack Vulnerability toward them. Due to some obscure stuff about the Faltine and such totem entities. 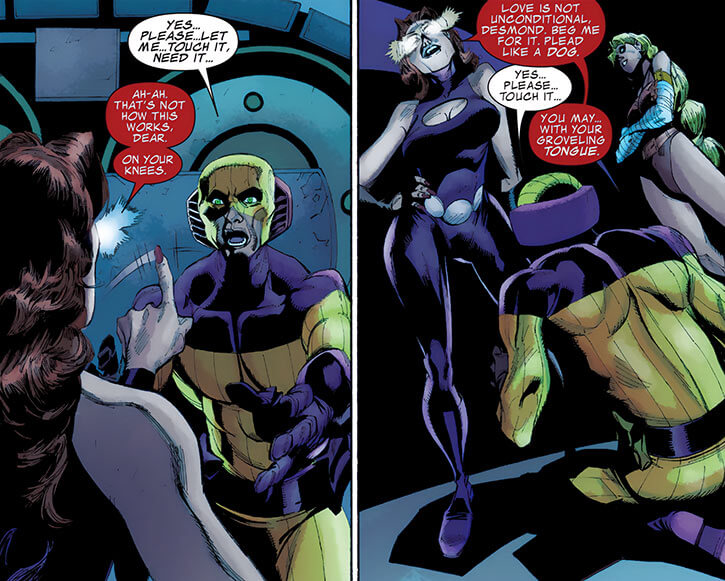 Lascivious seemed to have maybe 010 Hero Points max, being weirdly passive. The alternative explanation (and I’d lean that way) is that she had 025, but kept most of it for her Broadcast Empath attacks on Spider-Man.

None of the crowd she hanged around with after her resurrection was conducive to Connections. But she might have acquired Area Knowledge (Bagalia).

We never see DeVito in action during that stage. Unless you count guzzling beers.

*If* she’s like Letha, then she’s back to her Stage #2 stats, without equipment.

But it’s possible that, say, Letha left Bagalia because her powers had faded out – but Lascivious stayed since they didn’t.