Bullski’s Titanium Man armour, apparently based on Gremlin (Kondrati Topolov) technology, is quite powerful and sophisticated. It’s not too far behind the exemplar power armour (the Iron Man suit) and was arguably better-suited to space missions than the then-contemporary basic Iron Man suit.

As noted in the previous profile, a reasonable conclusion from the primary sources is that Boris Bullski is actually a LMD hosting the memories of Boris Bullski. However, this was never explicitly confirmed and secondary sources make no mention of it. Thus, what the impact of this unconfirmed artificial nature would be is unknown.

Bullski has a metal plate on the back of his head with ports for various armour systems. This is a more invasive system than used by most armours, particularly those using Stark’s S-Circuit or a variant thereof. If he’s indeed a LMD, that’s a logical choice.

In 2011, Bullski is seen fighting outside of his armour for the very first time. Beyond the strength and durability one could expect from a man his size, he demonstrates superior speed and fighting ability. This holds even against a master fighter such as James “Bucky” Barnes.

This incident led to game statistics where the Titanium Man’s combat prowess when armoured is simply his native fighting skills rather than specialised skills and systems for power armour  combat.

In 2002 Bullski — or perhaps the Bullski LMD — attacked Iron Man, either as personal revenge or as part of a contract. Apparently knowing that Stark was at that point working in orbit, the Titanium Man single-handedly stormed the Stark space command centre. He defeated all security – including Stark ally Sun Tao, wearing an Iron Man suit.

From the computers there, Bullski learned the exact location of Stark. He rocketed into orbit to attack him. Stark narrowly foiled the assault, and had to leave the Titanium Man unconscious as he made a desperate reentry. Bullski was apparently picked up by a Stark-Fujikawa space shuttle, perhaps indicating that they were his employers.

Two years later Bullski was allegedly working for a conspiracy called the Hammer. These guys intended to destroy the West to assert their power over the planet. In unknown circumstances, Bullski was — under the identity of “Andy Stockwell” — smuggled aboard a US government spaceship.

The ship was to fly at relativistic speeds toward a comet. It would the use high-yield lasers to perform two precise shots that would break the comet apart and prevent a likely collision with Earth. Somehow “Stockwell” had full intelligence about the operation.

The plan was to kill Stark after the first laser shot, leaving enough comet debris to devastate the Western hemisphere. 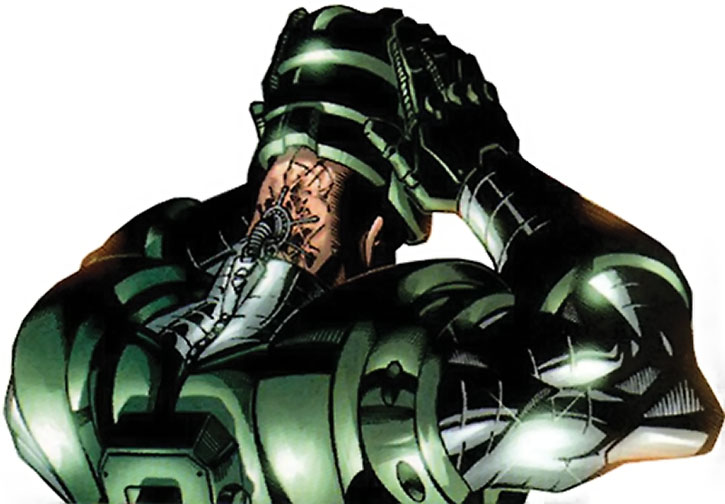 The operation was nearly successful. Stark suffered from short-term memory loss and disorientation due to the massive acceleration of the ship, whereas the much more robust Bullski could overcome these effects. Bullski almost tricked the slightly amnesiac Stark into believing his cover.

However, two small mistakes led Stark to realise that “Stockwell” wasn’t an American. Bullski tried to crush the laser cannon in a desperate attempt to prevent the second shot, but it was too late and he was cast adrift deep in space.

(“Stockwell” presented the “Hammer” conspiracy as a network of Communist sleeper agents. If he was a full Hammer member rather than a hired gun, then “Stockwell” cannot be Bullski. However, the official Marvel profile assumes that Stockwell was Bullski.)

The Titanium Man — presumably Boris Bullski, or his rather his LMD if it exists — was then hired by… Tony Stark through a mercenary broker (possibly A.I.M.). Stark wanted the Titanium Man to attack him in public, and to make a number of statements during the fake assassination attempt.

The objective of this manipulation was to give Stark ammunition to convince the US government of his stance about the registration of superhumans.

The contract went well despite the unplanned interference of Spider-Man. Bullski was well paid – with Iron Man handing him over a briefcase filled with cash. The Russian, bitter about his mercenary work made a number of predictions about how the government of the US would be as bad for superhumans as the government of the Russian Federation.

As it turned out, his pronouncements were pretty accurate. The US entered the Civil War era mere weeks later. Stark experienced a downfall and manhunt at the hands of Norman Osborn some months after that.

Though this is tentative, it is presumably in 2009 that the Titanium Man ceased to be single operative and that the Russian Federation started fielding a number of Titanium Men.

These pilots rode in Titanium Man armours similar to the 1970s designs, presumably for budgetary reasons. It is unknown how many suits exist, but only a single Titanium Man was ever seen deployed at any given point.

The Titanium Man armour(s) are remote-controlled in real time by officers in a command centre. The pilot inside the armour seems mostly intended as a failsafe in case the link is broken or complex interactions are needed. 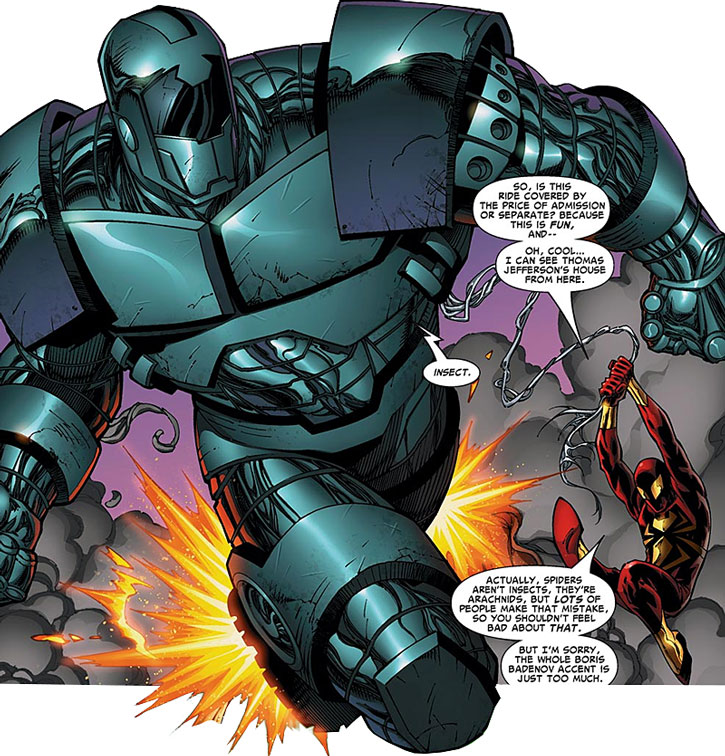 The first pilot to be clearly identified was one Corporal Gennedy Ovinnik (58th Army), who was seen in 2010 during a Russian intervention in the Transian civil war.

Presumably, the treatment originally used to turn Bullski into a giant is now sophisticated enough to be used on more subjects.

The presence of these Titanium Men make it difficult to identify whether Bullski was in the armour during any given appearance.

James “Bucky” Barnes mentioned a report saying that Bullski had “died in an explosion”. When seen, Bullski now had an arm replaced by a prosthesis, perhaps as a result of this explosion.

This is all too vague to pin down. But it likely refers to either his apparent 1995 death while fighting the Crimson Dynamo (Stark/Shatalov/Romanova) or the 2002 explosion of the Stark satellite.

A possible scenario is that Bullski lost an arm in 2002, was abandoned by his Stark-Fujikawa employers after they realised he was crippled, then was contacted by the Hammer to help build the armour that would be used by “Andy Stockwell”.

In this No-Prize Hypothesis , Hammer contacts then put Bullski in contact with allies within the Federal Russian government. The goal is to help them build much cheaper Titanium Man knock-off armours. Bullski negotiates a bionic arm similar to the Winter Soldier’s as part of the package.

In this timeline Bullski would have been sent to a prison camp as soon as the government could work without him, circa 2006.

Again, please note that this scenario is *thoroughly hypothetical* and is just an attempt at stringing together the few known facts.

In 2010, an unidentified Titanium Man joined a superhuman group accused of terrorism by the authorities, called Remont 6. The other members were the Iron Maiden (presumably Melina Vostokovna), the Unicorn (perhaps the same man who worked with Remont 4), Volga (presumably the same person as Volga Belle, name unknown) and the two Snow Leopards (Ilya and Ioakim Koblev).

The Winter Guard was sent after Remont 6 and narrowly prevailed, losing their then-current Darkstar in the process. Whether Remont 6’s Titanium Man survived the battle is unknown.

Some months later a Titanium Man was defeated in Georgia by Noh-Varr (formerly Marvel Boy). He was wearing an armour more akin to the Gremlin design. The motivation, identity, employer, goal, etc. of this man are unrevealed.

This and the Remont 6 incident may indicate a pattern of factions within the Russian government and military using Titanium Man armours and pilots for their own end. By contrast the Crimson Dynamo technology seems well in Federal hands.

Boris Bullski was spotted again in a prison camp in Russia in 2011. The camp was where disgraced agents, spies, operatives or even superhumans were sent after they had gone past their usefulness. Bullski had apparently been there seen the 1995 explosion – or, more likely, since the 2002 explosion.

One of his arms had been replaced by a cybernetic one very similar to the one grafter to James “Bucky” Barnes.

Bullski didn’t seem particularly old. Despite the hardship he looked perhaps younger than during his original appearance. This might be a minor hint toward this Bullski being the LMD, if one exists.

Bullski was promised his freedom if he killed Barnes, who had been imprisoned there for mere days. The prison camp saw constant arena matches between the inmates, many of whom were skilled fighters. For Bullski it was just one more such fight.

Bullski was about to kill Barnes when the guards threw weapons to the American. Their goal wasn’t to kill Barnes but to bring him close enough to death to break certain mental barriers. Suddenly armed, Barnes turned the tables on Bullski and beat him badly, sending him to the camp’s infirmary.

As of this writing, there haven’t been Titanium Man appearances since.

Bullski’s Civil War appearance insisted about his old-school Russian accent. But a thick accent hasn’t been mentioned before or since.

Bullski is nostalgic of the old USSR. He still salutes the red flag before launching a mission, even though it’s now just a personal ritual, and he has a collection of memorabilia from the old days. His mementos include various press clippings about his own career going all the way back to 1965.

Still, he knows that the world has moved on. He now behaves like an apolitical mercenary without a country. He still hates Iron Man, but his burnt out and pragmatic nature mean that he’ll work for Stark if the contract looks good. He may be very bitter about how the mighty have fallen, but has no special ideology, ambition or code of behaviour anymore.

“It was all the truth… what has become of us in Russia… and what will become of you, very soon, I think. When your government turns on you… when you are hunted and driven out… I wonder — how will you feel the day you run errands for other people… for briefcases filled with money ?”

Drawbacks:
After an explosion (possibly in 2002), Bullski acquires a SPR (missing his right arm) but receives a fully-functional prosthesis that compensates this Physical Restriction, much like his prosthetic lower left leg eliminates his other previous SPR. Bullski has always hovered close to Mistrust, and acquires the Drawback shortly before being thrown into a prison camp.

Equipment:
Bullski’s prosthetic right arm was only briefly seen, but seemed identical to the obviously cybernetic arm of James “Bucky” Barnes and may have the exact same capabilities. What was demonstrated on-panel can be summed up as [BODY 08, Martial Artist: 08] with his arm allowing Bullski to hit faster, hit harder, block unarmed attacks, etc. as tactically appropriate.

The following sections describes the successive suits of Titanium Man armour. The stats stick closely to what was actually demonstrated, without much speculation.

One suspects that the armour had more systems that actually demonstrated at any various points – for instance, systems that were present in older versions of the suit but not used.

Conversely, some of the systems written up in this section may have been Omni-Gadgets, being awfully convenient for the situation at hand and never appearing again.

The version numbers have been arbitrarily assigned to the Titanium Man armour suits in order of appearance ; in-universe the nomenclature is probably different.

This suit seems to be an enlarged, improved version of the Gremlin-built armour.
/STR/ 17 /BODY/ 16, R#0, Hardened Defenses

Drawbacks:
MPR (the wearer must have at least STR 06 and precisely two APs of Growth to operate the suit — each AP of STR below 06 is a -1CS to all physical AVs and OVs).

There are various indications that it is nowadays possible to produce Titanium Man armour variants in small quantities. The known appearances are : 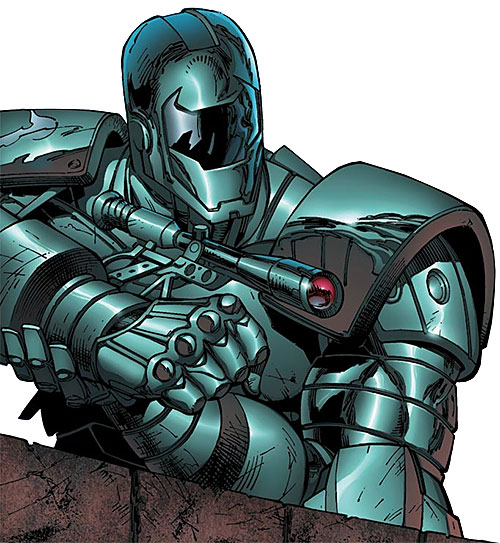 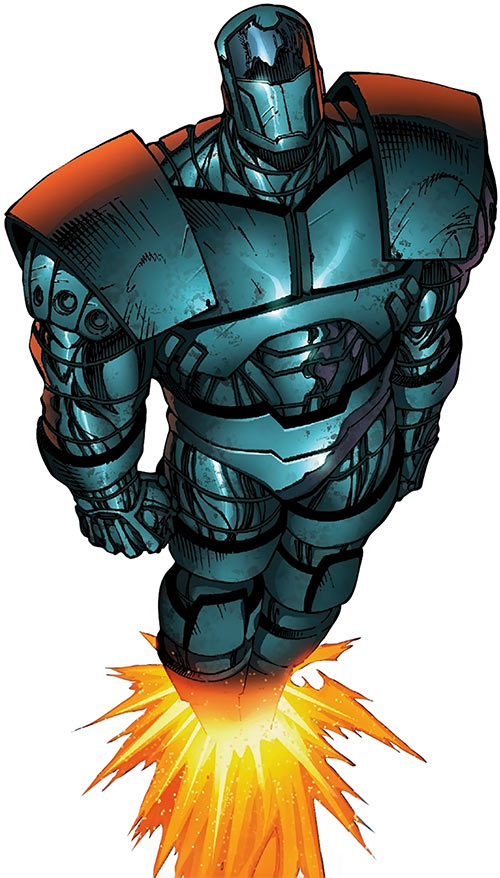 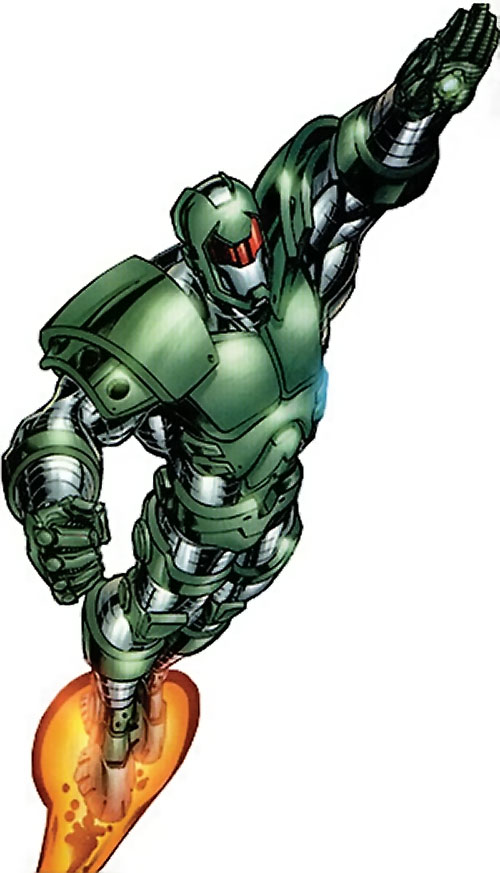 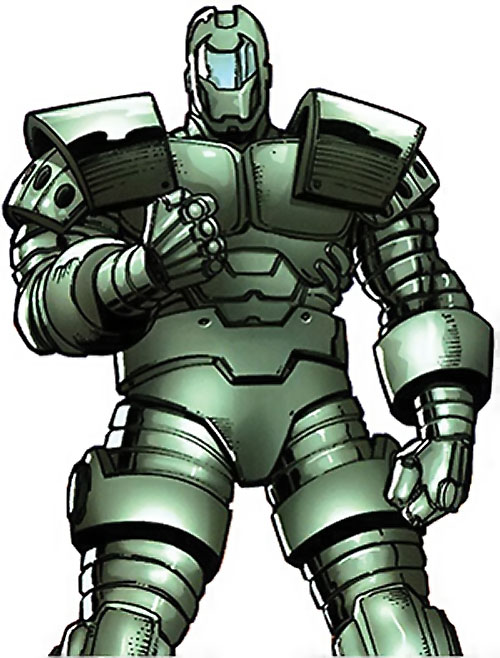 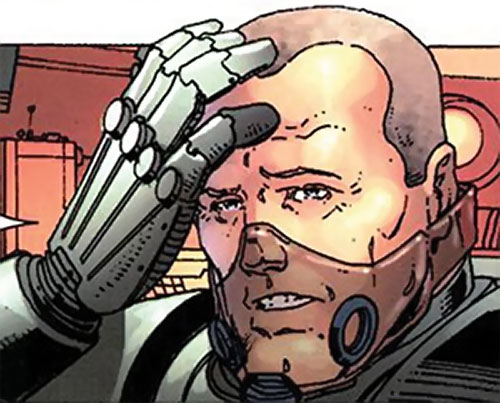 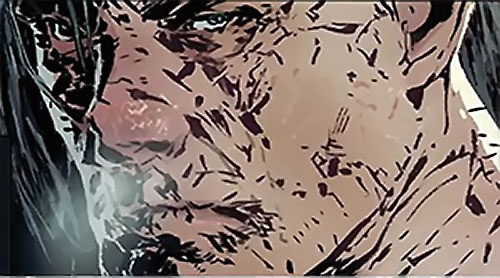 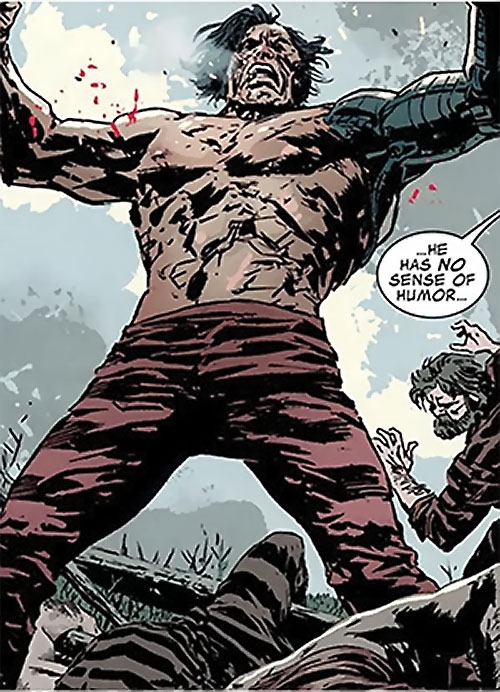 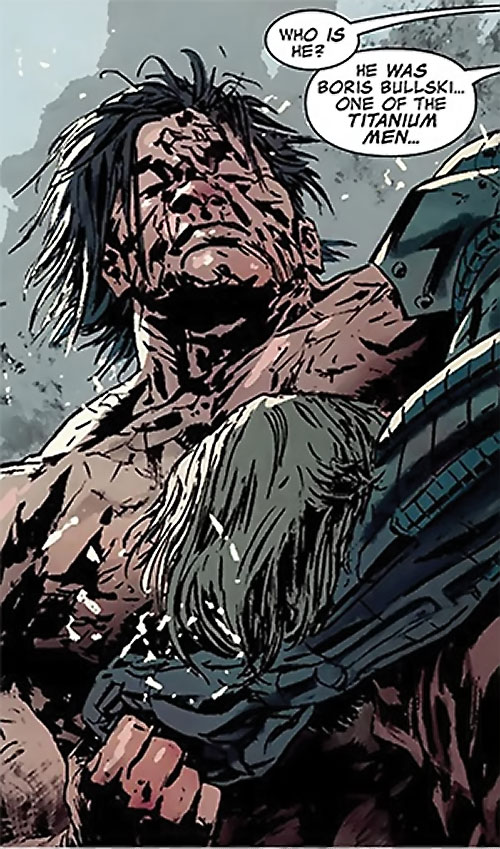