“Titano is invading the city itself ! Now no place on Earth is safe !”

Created in 1959, Tales to Astonish (and its sister magazine Tales of Suspense) was Marvel Comics’ crucible. It started under the Atlas imprint, but as things ramped up and the Kirby/Lee/Ditko/etc. material rolled in it became a Marvel book.

But early on, the lead story in almost every issue was… a GIANT MONSTER story ! These were in the vein of 1950s “atomic horror” movies such as Them!, The Beast From 20,000 Fathoms, The Giant Claw, Twenty Million Miles To Earth and the like.

In the tenth issue there was Titano. Let’s call him “Titano the crab” to avoid confusion with other Titanos, such as the stupendous simian in Superman stories.

Titano seems to be a typical crab. Albeit one that appears to be about 50 metres (55 yards) tall.

As often in 1950s giant monster stories, its size varies considerably from panel to panel. But the general idea is that it can easily grab a destroyer with a single pincer, lift it above the water and snap it in two.

Ordinary crabs have pincers, a shell, and sensory organs that are pretty good at smelling what’s in the water. They are also adaptable, omnivorous, amphibious, and could easily circle-strafe if they had guns.

Given its tremendous size, Titano could chase a nuclear submarine across vast distances. It likely can do 30 mph (50 km/h) or so. In shallow seas, such a monstrous mass going at that speed is enough to result in tidal waves. 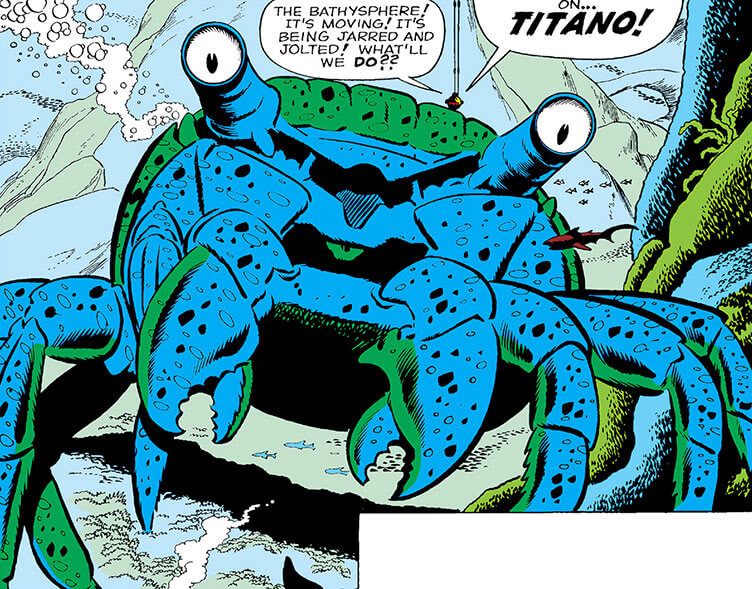 In 1960, Titano awoke. There were numerous sightings and disasters across the Pacific.

The US Navy established contact 400 miles South of Honolulu, when Titano destroyed a target ship. A task force found the crab again and investigated using a diving sphere. But they had to flee when Titano attacked.

The monster seemed invincible and indestructible. It likely could raze entire cities to feed. And Marvel Comics only obtained the rights to Godzilla in 1977, so that countermeasure was out.

But one Cdr. Hartnell came up with a plan. He had his atomic submarine painted in garish, luminous yellow and red paints. This attracted Titano’s attention, as hoped. With the monster chasing the sub, Hartnell sailed North at full speed for thousands of miles.

Though the vessel started breaking down, the Commander’s plan worked. In the Arctic, the sub sharply veered. With its mass, Titano couldn’t react in time. It crashed into a huge glacier, which collapsed upon it.

The monster was frozen… until climate change would thaw that ice. So I reckon we got about a week left, tops.

He’s hungry and, I guess, crabby.

In the later Marvel Universe, Titano could be a result of:

Namor would still be amnesiac at this time. But the Mole Man might have found and unleashed Titano, as his first assault on the surface world – all prior to Fantastic Four Vol. 1 #1.

An excerpt from the community discussion about his APs of Growth and related numbers.

Therefore, a man-sized crab (no Shrinking) would have a BODY of 07. This sounds slightly high for even a 100kg crab, but they do have a shell and stuff… Still, I’d be more comfortable with BODY 06 for a no-Shrinking crab. Since heroic fantasy warriors could likely kill it with swords.

So BODY 06 for a Shrink-free crab, though that’s a bit generous.

Now, we are dealing with a non-humanoid creature, so the height isn’t really relevant – crabs are kinda flat. And as noted, the apparent size of the critter varies significantly from panel to panel, so assessments can’t be based on vitals.

BODY as the key metric

We could also infer its BODY from observing that the USN seemed certain they couldn’t blow it up with 1960s naval artillery. By this point they still had 1940s battleship, so we’re mostly talking about 410mm main guns firing 2,700 pounds armour-piercing shells (assuming an Iowa class ship  or something like that). As always the DCH rulesbook noticeably underestimates the EV (listed as a 15). I’d say EV 18.

By this measurement the crab likely has a BODY in the 22-to-24 Column, since it doesn’t have Hero Points. And upon re-reading, BODY 28 does strike me as too high, unless we emphasise the statements about the crab causing tidal waves.

So STR 25 BODY 24 would be a possible target. That’d be Growth: 18, using generous but not absurd values for a 100kg Shrinking-free crab. 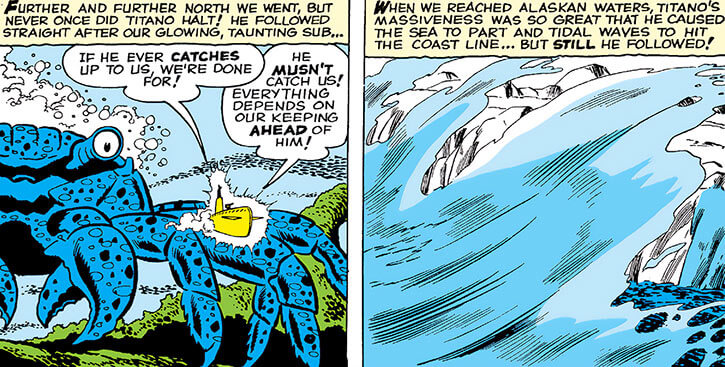 To use gigantic numbers for this gigantic crab, increase Strength to 25 and Stamina to 24 (which raises Fortitude to 24 and Toughness to 25). See the OMACS 2 document for the uncapped scale.